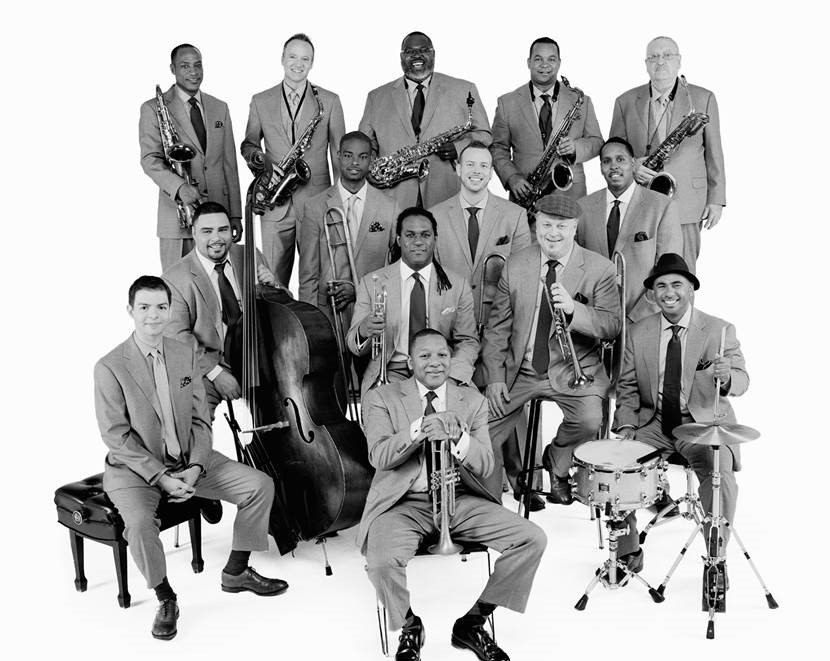 The Jazz at Lincoln Center Orchestra (JLCO) filed onto the stage, and the sold-out crowd erupted in cheers as the evening began. Founder and leader Wynton Marsalis entered with the horns, and sat in the third, and last, row with fellow trumpeters Marcus Printup and Kenny Rampton. Marsalis has assembled a talented group from the crème de la crème from the world of musical education and jazz. Education continues to be a signature of Marsalis, as his marvelous career evolves.

The first of nine arrangements performed, “Señor Blues”, is from jazz pianist Horace Silver’s 1956 album 6 Pieces of Silver. Many would recall Silver’s release with the Jazz Messengers two years previous. Many more will think of Song for My Father, from 1965, famously “sampled” by Steely Dan for their signature song, “Rikky Don’t Lose that Number”. “Señor Blues [is] the finest in jazz since 1939,” says Marsalis. This piece was arranged by bassist Carlos Henriquez, from the Juilliard School’s Music Advancement Program, a member of the music faculty at Northwestern University School of Music since 2008. He was also music director of the JLCO’s cultural exchange with the Cuban Institute of Music in 2010.

The Chan Centre is an ideal vessel for this ensemble, and indeed an integral reason for them even appearing in Vancouver. The third tune performed, a ballad called “Infant Eyes”, was written by Wayne Shorter for his daughter and appeared on the 1964 Blue Note album Speak No Evil. Arranged by Marsalis, not one musician was singled out, but rather all were featured in short solos throughout the piece for a truly democratic performance overall. Marsalis recounted what Shorter has told him about music: “Notes are like people. You have to walk right up and meet them. Each one has a different personality dependent on circumstance.”

“As long as there is democracy, there will be people wanting to play jazz, because nothing else will ever so perfectly capture the democratic process in sound,” Marsalis has said. “Jazz means working things out musically with other people. You have to listen to other musicians and play with them even if you don’t agree with what they’re playing. It teaches you the very opposite of racism and anti-Semitism. It teaches you that the world is big enough to accommodate us all.”

The evening ended with a standing ovation; the musicians already off-stage, the applause lasted over two minutes. Then Marsalis returned to the stage with the rhythm section—Ali Jackson on drums, Carlos Henriquez on bass, and Dan Nimmer on piano, along with Chris Crenshaw and Victor Goines— for “Weary Blues”, a multi-strain blues song originally written by Artie Matthews in 1915. This arrangement was inspired by Sidney Bechet’s performance on Blue Note Jazz Men, recorded in 1945. It was a thrilling end to a thrilling evening, delivered to an appreciative audience by one of the best in history. And that is saying something.