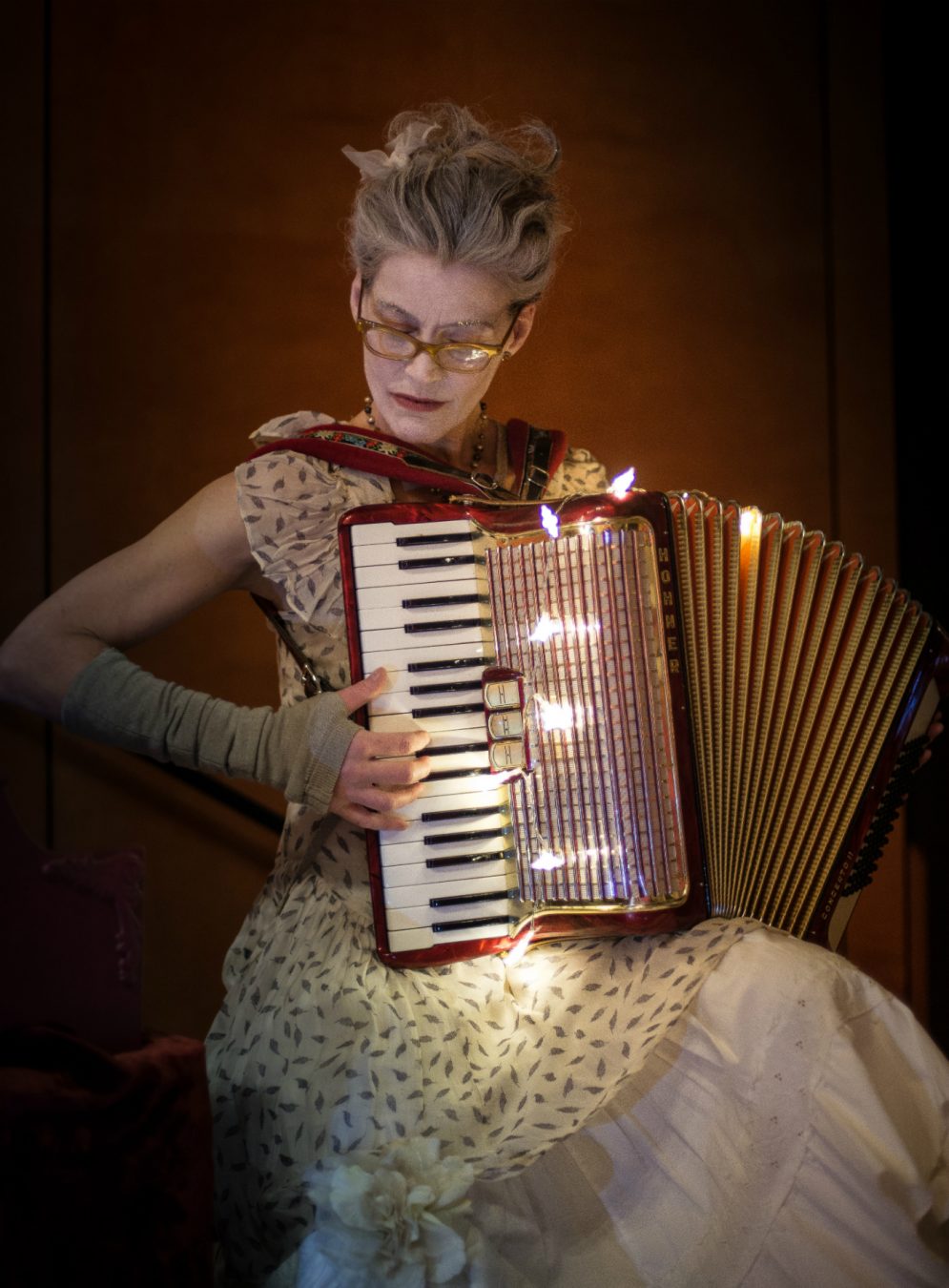 “I’ve played music throughout my life,” she says. “My mom was a music teacher at the elementary school I went to. I just ended up playing all the instruments that she didn’t have in her band. So, I guess you could say right away, I had a knack for playing the weird thing.”

Indeed, the accordion is quite a misfit among its peers. Pop culture has come to know it best as parodist “Weird Al” Yankovic’s instrument of choice. A instrumental powerhouse? Maybe not. “Perhaps that’s the nature of the accordion,” Petersen muses. “It needs a little tragedy in it.”

That’s what Petersen laughs about at Forty Ninth Parallel Coffee Roasters on Main Street on a sunny afternoon. There’s no denying her passion for her chosen instrument’s “underdog identity,” even as she enters her sixth and final year as the artistic director of the Accordion Noir Festival—Canada’s only alternative accordion festival, which in 2017 celebrates its 10th anniversary.

“An accordion festival seems like such a weird idea, but it’s a great opportunity for critical discourse,” Petersen says of the event, which will run from Sept. 7 to 10 at the Russian Hall in Strathcona and St. James Anglican Church in the Downtown Eastside. “Young, fresh voices are wanting to recreate and reclaim [the instrument]. So, the festival has been a great platform; it’s perfect for voices that need to be heard.” But don’t expect these innovative game-changers to be playing traditional polka (sorry, “Weird Al”); instead, be prepared for an instrument rich in history to be elevated to the next level with a hint of modern grace and electronic edge. Featured on this year’s roster are some of the accordion world’s finest, including Finnish star Antti Paalanen and all-female Russian power group Iva Nova.

So how does one develop a love for an instrument that so often goes ignored? Funnily enough, it wasn’t Petersen’s doing. When a friend was trying to get rid of an old accordion sitting in his garage, Petersen and her partner, Chris, adopted it. Once home, Petersen discovered she had a natural gift for the awkward instrument. “Poor Chris, I have not stopped since. He’s a patient man,” she says with a laugh. Eventually Petersen and her accordion enrolled in the music program at Vancouver Community College; after studying for four years, she got involved with Accordion Noir.

As artistic director, Petersen put her heart and soul into the festival, raising its ranks from a simple community event to a professional arts organization. Each year, she has brought international talent to the stage, offered accordion repairs, set up a store, and even created year-round youth programs (“Can you image a room of hyper nine-year-olds with accordions?”).

What makes the accordion understatedly beautiful is its accessibility: it’s an instrument of the people. When families in central and eastern Europe could not afford to play the delicate keys of the piano, they picked up the flimsy yet stoic accordion. “Perhaps I’m attracted to its cultural glimpse,” Petersen reflects, referring to the accordion’s slowly growing presence in the city. “It’s kind of making a comeback, but it isn’t taking itself that seriously.” Indeed, the accordion knows how to rattle up the crowd, and it knows how to kick off a party, too.