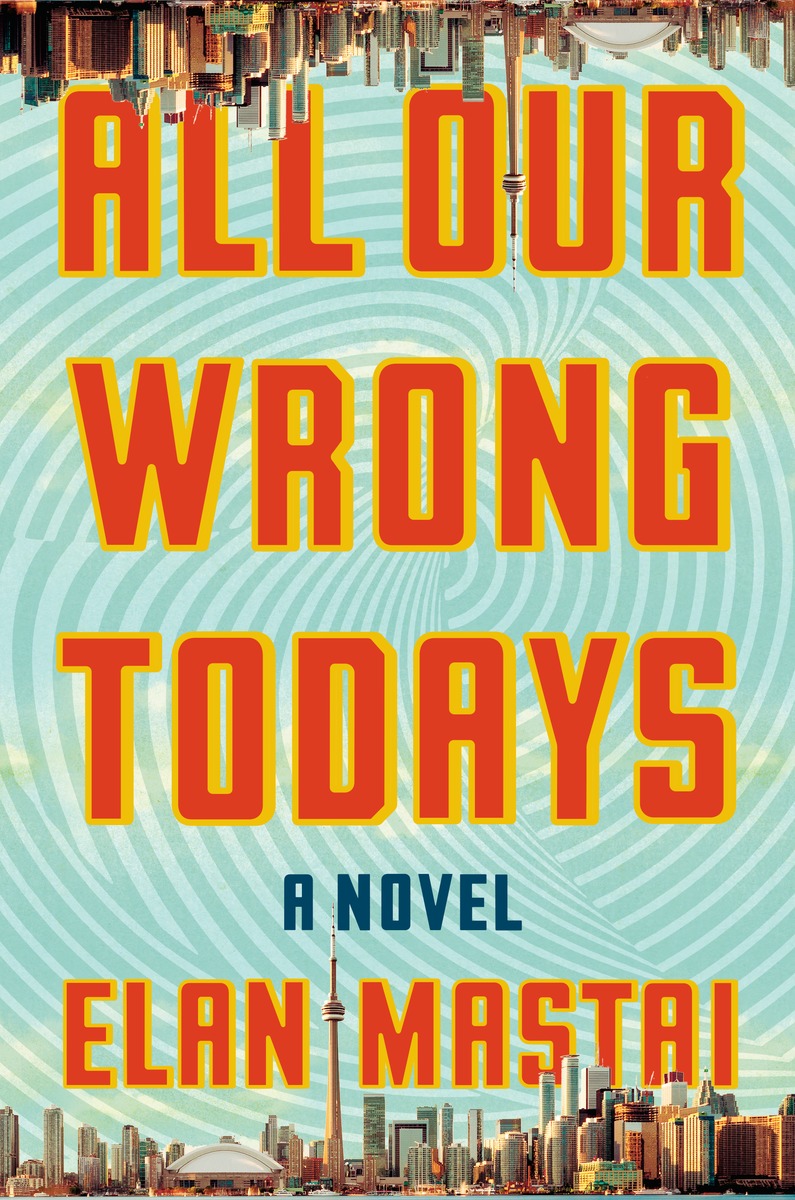 The more Elan Mastai talks, the more it becomes evident that he is something of a mad scientist. He’s got the hair for it, certainly, and a nice pair of thick-rimmed glasses—but instead of a laboratory, Mastai’s experiments happen in your brain.

It’s there, in the folds of your imagination, that he mixes potions and watches things change colour or bubble over. “Except there are no explosions,” Mastai says with a smile. “When I have an idea, the consequence is that you close the book.”

The book he is referring to is his debut novel, All Our Wrong Todays. The Vancouver-born, Toronto-based screenwriter (The F Word, The Samaritan) has been making movies for 15 years, but this is his first time tackling a book. And gosh, what an entrance.

All Our Wrong Todays (Penguin Random House) follows Tom, who lives in an alternate version of 2016. It’s not the future—it’s the right now, but different. Tom’s 2016 is the utopian manifestation that scientists and creatives in the 1950s thought we would have by now: flying cars, teleportation, and never-browning avocados. In the book, a time-travel expedition goes awry, and Tom finds himself in our iteration of the present: the one where the iPhone is the holy grail and battery-powered cars are still considered an anomaly. To him, our idea of technological innovation is shockingly archaic—even dystopian. It’s like a teenager scoffing at the notion that his dad once used a pager.

“Growing up in Vancouver, Expo ‘86 was a big deal,” Mastai says between bites of a chocolate chip walnut cookie at Elysian on 5th Avenue. “That idea of the future that was promoted by these world fairs really captured my imagination. But even as a kid, I knew there was a disconnect. I knew that the future wasn’t turning out the way that these writers and artists in the ‘50s and ‘60s imagined it would. And I got older, and I started working as a screenwriter, and the idea always sort of stayed with me: that vision of the future that never happened.”

The concept of a world-changing apocalypse is prevalent throughout our popular culture, and Mastai started to take notice. “If somebody from my grandfather’s generation who believed in that sort of utopian vision of the future, where technology would solve all our problems, was dropped into today, this would seem like the dystopia,” he says. “And I liked that idea, of somebody from another version of the present landing here and perceiving our world to be dystopian.” To readers, though, it’s Tom’s wildly futuristic 2016 that sounds foreign. Mastai managed to create an entirely new way of interpreting the world, richly textured and meticulously considered. He did this by playing off of our collective imagination about what we think the future could have—flying cars, for instance—and then honing in on the unintended consequences that come along with it (such as traffic that rises, say, 20 storeys in the air). Beyond that, he looked at personal pet peeves and problems, and how technology might fix them. An example? Running late, as solved by teleportation.

“A lot of us assume that if we peel everything away, that our core is good. But what if it’s not? What if all the layers are there for a reason?”

“One of the things that’s interesting about people, and I say this in the book, is the difference between a human being and an inanimate object is that human beings are made up of cells, and each cell has a map of the human body—so technically speaking, the human body is made up of 37 trillion maps of yourself,” Mastai says casually. “But your clothes aren’t. So do you teleport naked? And like, get new clothes on the other side? So what if we have a structure where you could have your clothing recycled?” In All Our Wrong Todays, it exists. This is just how Mastai’s brain works: it’s always wondering what if.

“I remember seeing, at a Canadian government lab in 2000, a prototype 3D printer. And they were showing us this 3D printer and had sent a model duck from Texas to Ottawa,” Mastai recalls. “And I was like, ‘Could you have the same thing but it be edible, like a nutrient gel, so you could make it look like a burger and inject it with enough vitamins that it would be healthy? How thin would it be before it breaks? Could you make a textured fabric so I could print out a T-shirt for myself to wear?’ So I was asking [the researcher] all these crazy questions and he said, ‘Look, we’re just really excited that we were able to email a duck from Texas.’” But Mastai was already thinking 10 steps beyond. You see? Mad scientist.

For the surface reader, the one who just wants a simple escape, a quintessential page-turner, All Our Wrong Todays will deliver. There’s constant action (and not just because the chapters are really short), written in a witty, punching voice. For those who want to dig deeper, though, to take a closer read, there are many layers to pull back.

Upfront the book is about time travel, and about alternate realities; below that, it is about second chances, and coming to grips with the hand that you’re dealt. Do any of us really get the future we think we should have?

“We always imagine that we would be the same—everything in the world could change, the whole world could change, but we would be the same—which I think is a sort of hilarious and narcissistic perspective,” says Mastai, insisting that we are products of circumstance. “A lot of us assume that if we peel everything away, that our core is good. But what if it’s not? What if all the layers are there for a reason? What if all those layers of protection that we’ve piled up on top of ourselves are actually good—are what keep us from being narcissistic monsters?” The book poses these questions on its main character, and in doing so poses them right on us.

Deeper still, Mastai’s novel is about a man forced to come to terms with the loss of his mother. That’s the raw, human part of the narrative: realizing how much a tragedy changes you, and figuring out how to navigate the aftermath. It’s a place that Mastai knew how to write from, having lost his own mom in 2001. When he was conceptualizing the book, he realized he was ready to write about his loss—and the people, his two daughters, who helped fill in the abyss. “I was reflecting back on a time of my life when I lost my mom, how it affected me, how it affected the rest of my family,” he says. “When you lose a parent or sibling or grandparent, the orbital mechanics of your emotional life are thrown off balance, and you add people to your life to find your balance again. So having children, I think, felt like the equilibrium that had never felt right since I lost my mom—it’s different, but it helped me find it again in a way that I haven’t felt for a number of years.” Having children plays an important part in the book, too, and it is in these underlying storytelling arcs that Mastai shows the most honest bits of himself. All Our Wrong Todays is a highly experimental, colourful, and cerebral product, but by this point in the story, that shouldn’t come as a surprise.