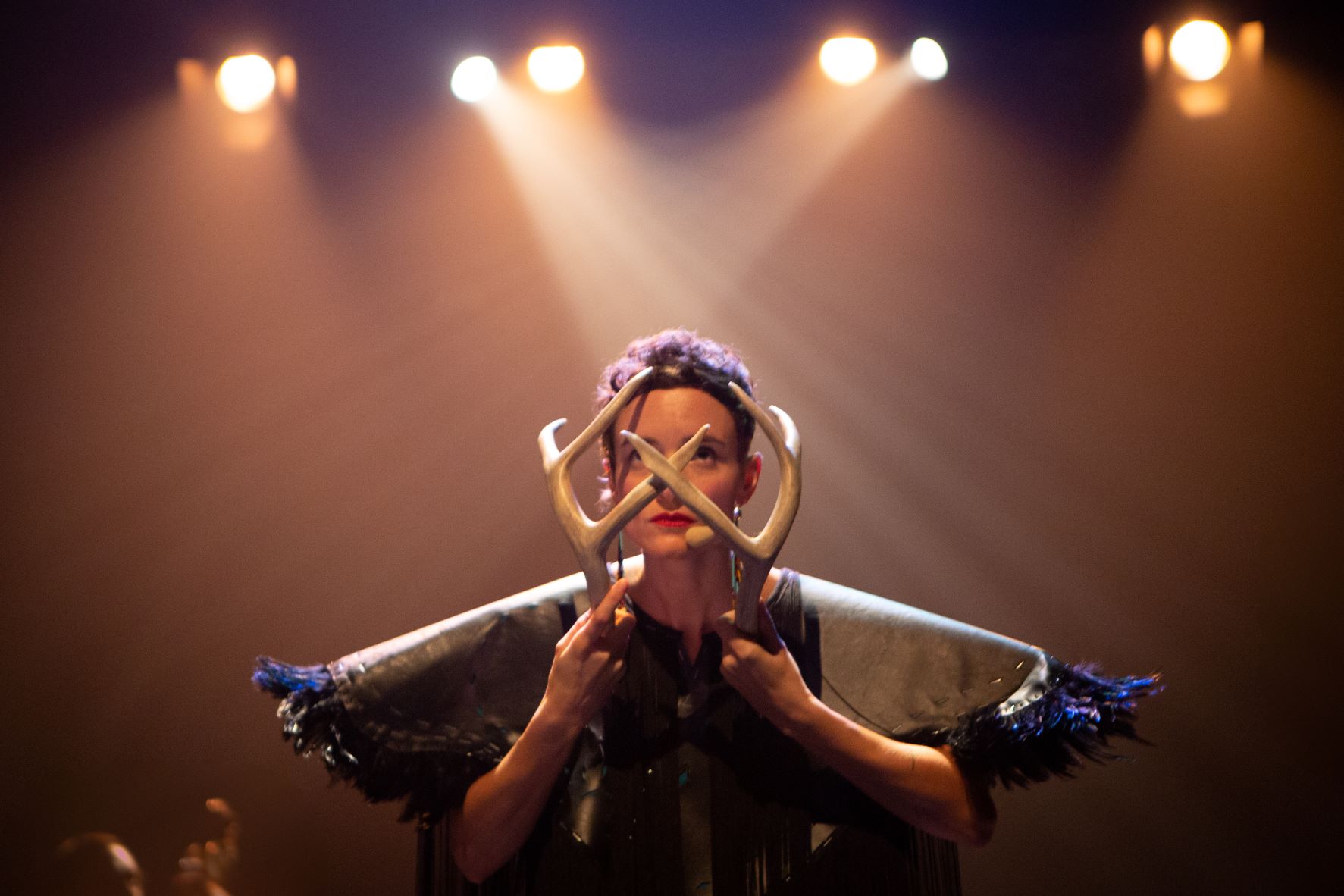 As the cold recedes and the cherry blossoms perform their annual bloom, springtime in Vancouver will also be signalled by a resounding return to live performance. Throughout March at the Chan Centre of Performing Arts, a new mini-series Decolonize the Chan will present the works of three Indigenous artists: Leonard Sumner, Elisapie, and Moe Clark. Selected for the series by guest curator and famed mezzo soprano Marion Newman, each artist embodies a unique sound that will unfold over the course of their performance.

For Anishinaabek MC and singer-songwriter Leonard Sumner, who is set to launch the series with his performance on March 5, this will be the first indoor concert since the pandemic—and, unusually, he’s feeling a bit nervous. “I’m usually pretty calm about [performing],” Sumner tells me from his home in Winnipeg. But the passion of being on stage is guaranteed to return for the Juno-nominated artist, whose work amalgamates folk, hip-hop, R&B, and spoken word genres. “It just feels nice getting back into the creative mode, creating a setlist and thinking about how you’re going to perform,” he says, hinting at some never-heard-before songs during his set.

Sumner’s setlist will also be made up of tracks from his latest album, Thunderbird, which was released in March last year. The album returns to Sumner’s hip-hop roots, moving away from his folk tendencies; his West Coast rap flow is robust in tracks like “l4ni” which also features verses sung in Ojibwe.

Catalyzed by the loss of his mother in 2019, the album details grief, love, family, and significant stories of Indigenous history—from the 2011 flood that displaced residents of Little Saskatchewan in “Flooded” to the realities of the residential school system in “Mourningstar.” 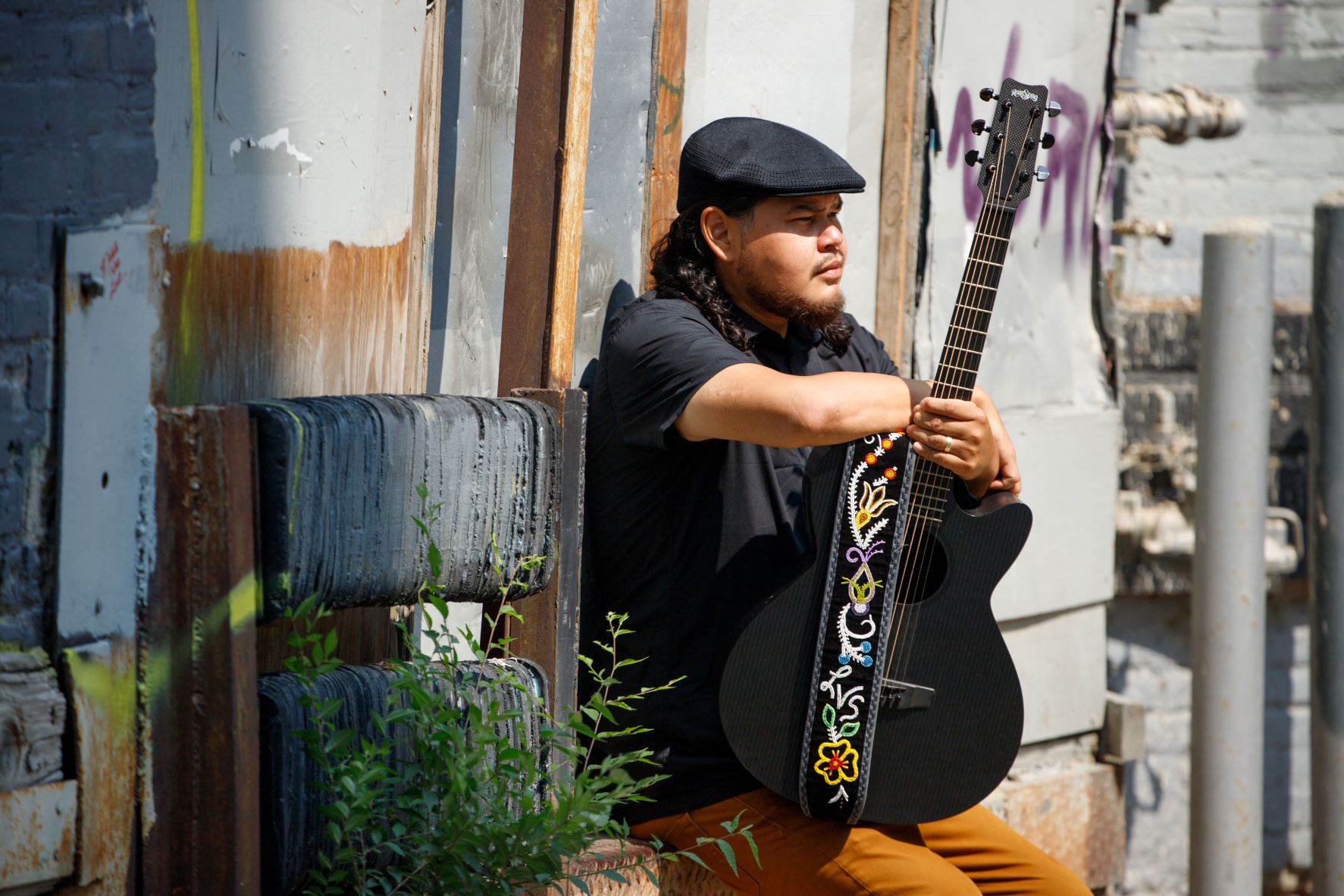 Leonard Sumner will perform at the Chan Centre on March 5th.

To put the album together, Sumner revisited a few of his older songs dating back  a decade and rewrote them into something new yet still nostalgic. “I feel like every song deserves to be revisited every now and then. They’re like friends. And it’s good to check up on old friends and see how they’re doing … I changed some lyrics here and there as a result of my personal growth as a songwriter too.”

He tells me his track “Mourningstar,” which tells a story of youth living within the residential school system, is a good example of his change in perspective over time: the original version was much angrier than the new mature version, he explains. Indeed, as Sumner emotionally raps lines like “I know it’s hard to follow rules when they’re stacked against you” a steady aggression in his inflection bursts into a surprisingly low-tempo melodic chorus–a choice that seems to invite serious contemplation.

Revisiting the past is also a significant theme in the work of Inuk singer-songwriter Elisapie, who will perform tracks from her Juno-nominated album The Ballad of the Runaway Girl at the Chan on March 11. For Elisapie, creating Ballad was a process of healing from her decision to leave her childhood home in the North for Montreal. Twenty years after leaving her home, in a bout of postpartum depression, she found herself needing to reconnect with her roots—something she did through old music. From the songs of her uncle’s old band Sugluk (who she used to sing backup vocals for) to Inuk singer-songwriter Willie Thrasher’s 1981 album Spirit Child, Elisapie rediscovered the emotions of her childhood, channelling those feelings into new music.

“The foundation of all the songs that I wrote [for the album] are these old songs, folk songs, classic songs from where I’m from,” Elisapie explains. “I needed to feel like I was connected to them in order to get stronger. It was a very beautiful journey through music.” 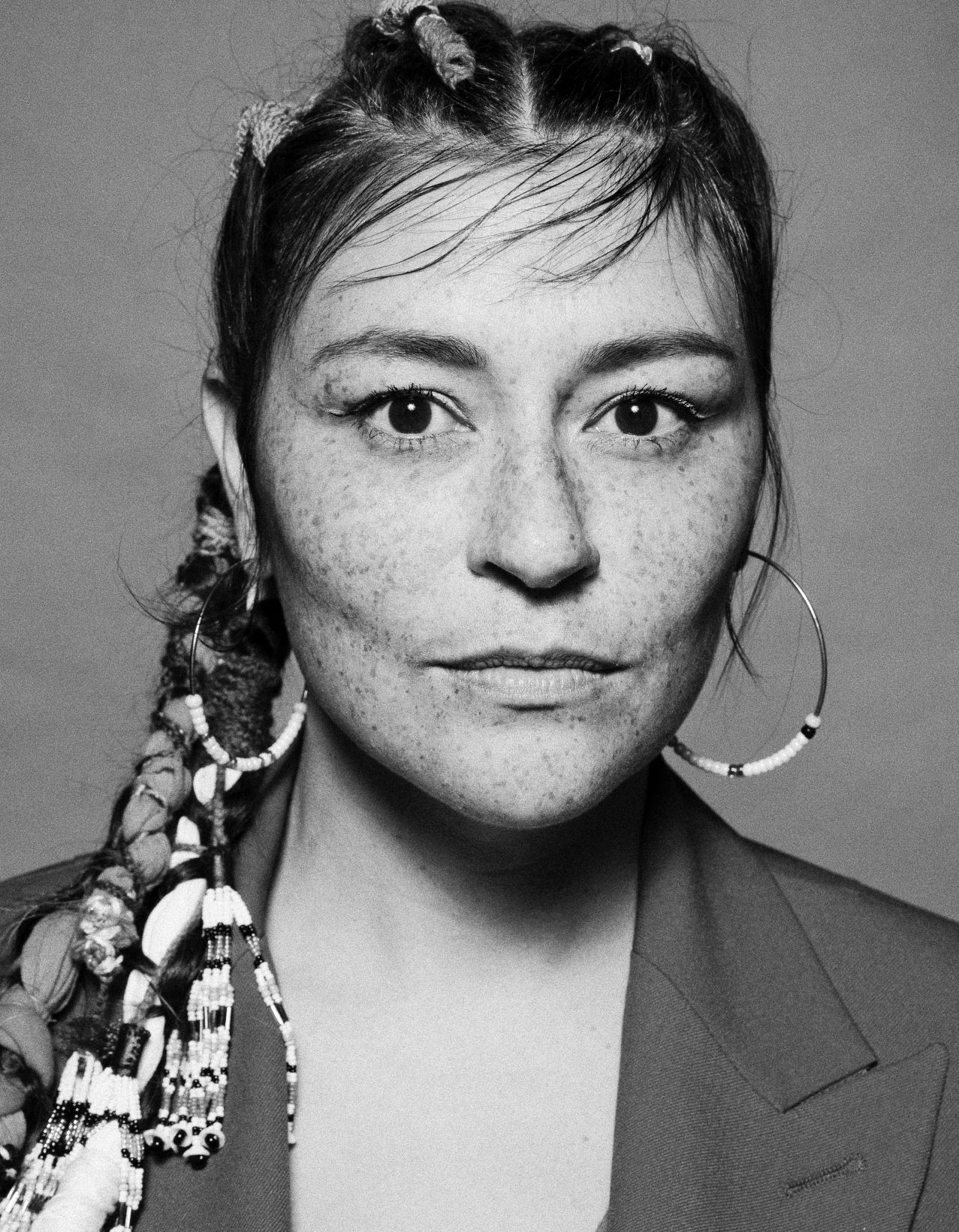 The Ballad of the Runaway Girl (which was titled in homage to a song by Elisapie’s uncle) is a spiritual and sonic journey that details the complexity of Eliaspie’s life, from her adoption to her mixed heritage. Throughout the album, Elisapie sings with tender yet deliberate vocals in three languages: English, French, and Inuktitut—though the latter is reserved for songs dedicated to her family.

For example, the quietly powerful track “Una” is an Inuktitut letter to Elisapie’s biological mother, who gave the singer up for adoption. The song is a chance for her to ask her mother questions that she had always secretly wanted to ask: did you love me? It’s one of Elisapie’s favourite songs to perform, she tells me. “[The song] starts off really smooth, very fragile, very minimalist and then gradually it’s like, bang. It’s a wall of sound. Everyone’s singing. There’s something very electrifying and it gives you a lot of strength,” she says of the slow build up to a resounding chorus.

For Métis and two-spirit artist Moe Clark, who will end the series on March 26, the past is similarly an inherent part of her performance, which will manifest traditional stories and ceremonial practices into music. Titled The Feast of the Invisible, Clark’s performance is an auditory experience which “stems from [Indigenous] practices of feasting as a form of honour, acknowledgement, and giving of physical, spiritual, emotional, mental support to our guides, to our ancestors, to the lands,” Clark says. She goes on to explain that the performance is meant to deepen spiritual connections between “us as two-legged with the winged-ones, the four-legged, and with entities and guides who exist in invisible realms.” 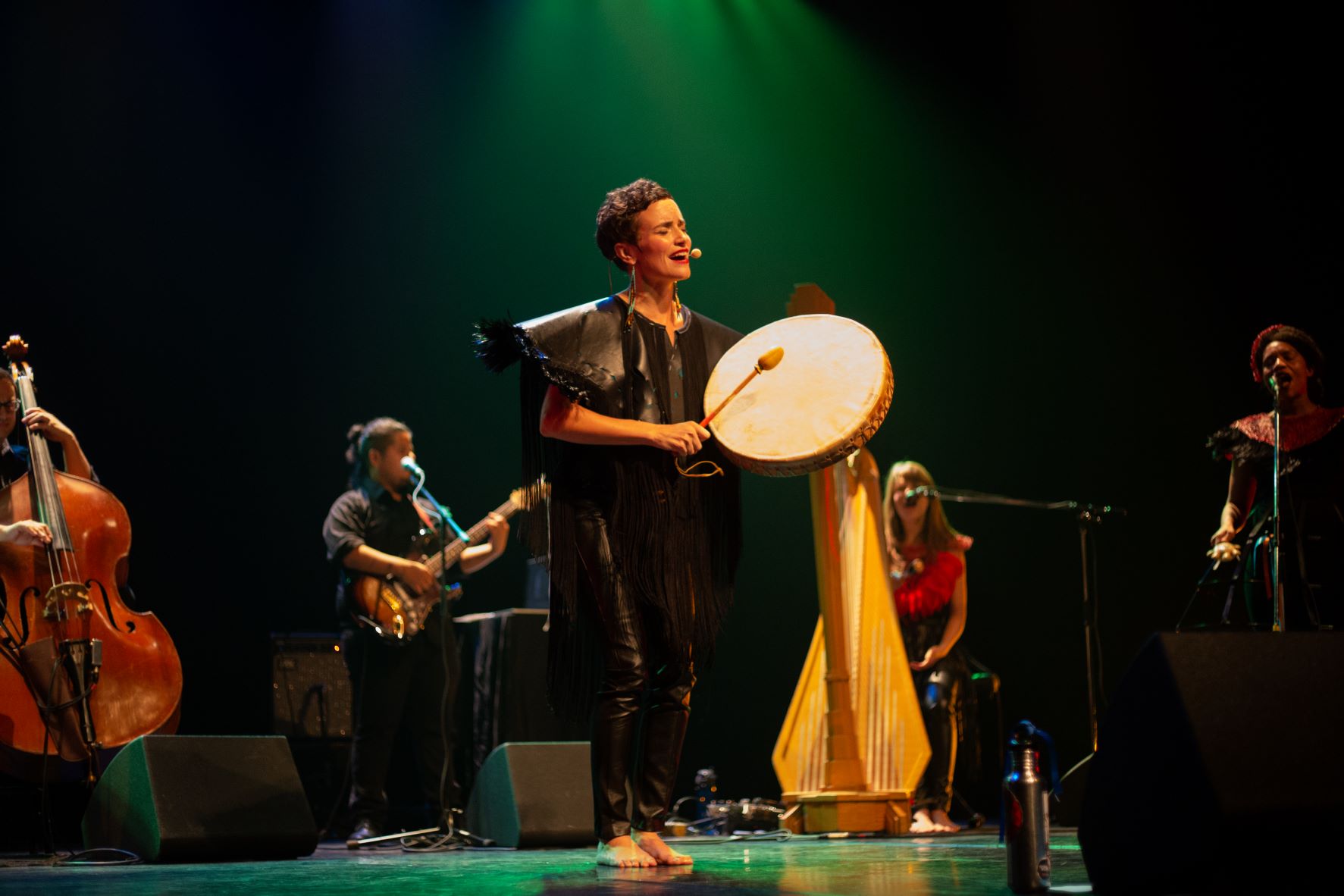 The feast that Clark is set to present is  made up of different languages—Cree, Ojibwe, Inuktitut, and English—and sounds—jazz, folk, trance, and têwêhikan (hand drum.) Joined on stage by six musicians of various Indigenous and non-Indigenous cultures, Clark will perform songs taught to her or co-written with Indigenous elders. “One of the songs is an Ojibwe Northern Lights song that was taught to me by the late elder Bob Smoker,” Clark says. “They’re dream songs, songs based on prophecies from oral traditions, and very old stories.”

The culmination of Clark’s Chan performance—and indeed Sumner’s and Elisapie’s performances as well—is the complex and personal journey each artist goes through both on stage and within, with regards to their art, their Indigeneity, and their existence as human beings.

“Given the roles of the Indian Act, residential schools, and the various forms of power over Indigenous people to divide and conquer, [my] work is about healing,” says Clark. “It’s about coming together in this spirited Nation to Nation dialogue and collaborating with artists who come from different cultures as well.”