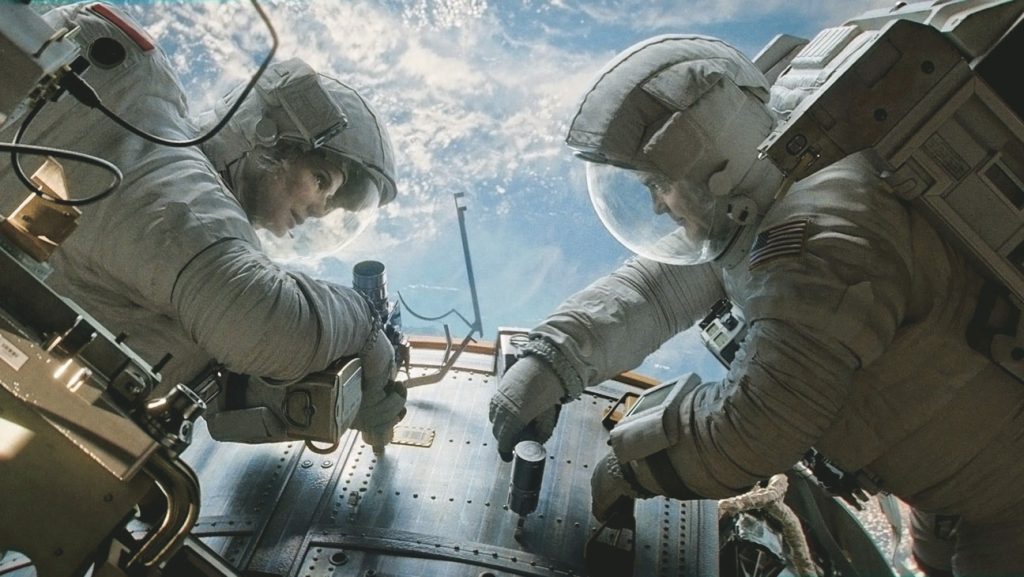 The emcee at the preview screening was wrapping up his intro. “Enjoy Gravity!” he told the audience.

Well, that made me feel bad. Many is the time I’ve wanted to dial it down some, at least until my bike gets to the top of the hill. With all that gravitational force does for us every single day it suddenly seemed rather ungrateful of me. But as the man was referring to the movie starring Sandra Bullock and George Clooney, I accepted that he was not trying to mess with me and settled in to watch the film.

Gravity was good. Not as compelling as Newton’s Law of Universal Gravitation perhaps, but strong enough to hold you in a theatre seat for 90 minutes. (My main complaint was that, after pointing out early on that space is soundless, the movie fails to trust the power of silence, gradually cranking up the soundtrack like the stereo at a frat party.) Quibbles aside, Gravity accomplished something that I hope will stand as a lesson to Hollywood. It proved once again that CGI can be used for good.

CGI (Computer-Generated Imagery) has transformed big budget film-making like few other trends. The ability to create seeming impossibilities onscreen has resulted in a genre of action films with all the plausibility of Saturday morning cartoons. With young audiences demanding bigger and better thrills, directors and studios feel they must go over the top again and again. Rare is the action hero whose exploits feel relatable. I recall feeling pathetically grateful to the makers of The Bourne Identity simply because Jason Bourne (Matt Damon) injures his leg in one scene and then limps for the rest of the film, almost like a normal human.

Films often use CGI in ways that call attention to the technology—having airplanes fly into the camera, or pulling us back, back, back until we’re rising through the clouds. Real-world imagery is interspersed with impossible-to-film tricks, announcing we’ve left the physical world and entered a pixelated reality. And in the words of the late Roger Ebert: “If anything can happen, who cares what happens?”

Gravity takes a different approach to digital technology, immersing us in a believable environment with logical rules. Not every space detail was nailed, as popular PBS scientist Neil deGrasse Tyson pointed out on Twitter (asking among other things why Sandra Bullock’s hair stayed neat in zero Gs). But it works well enough to remind you that CGI does not have to be used to give facial expressions to a spider or allow a human being to outrun a fireball.

Used properly in Gravity, CGI suspended my disbelief like a space-walking astronaut. And once outside the theatre having my feet on the ground felt good too. I must remember to appreciate that.