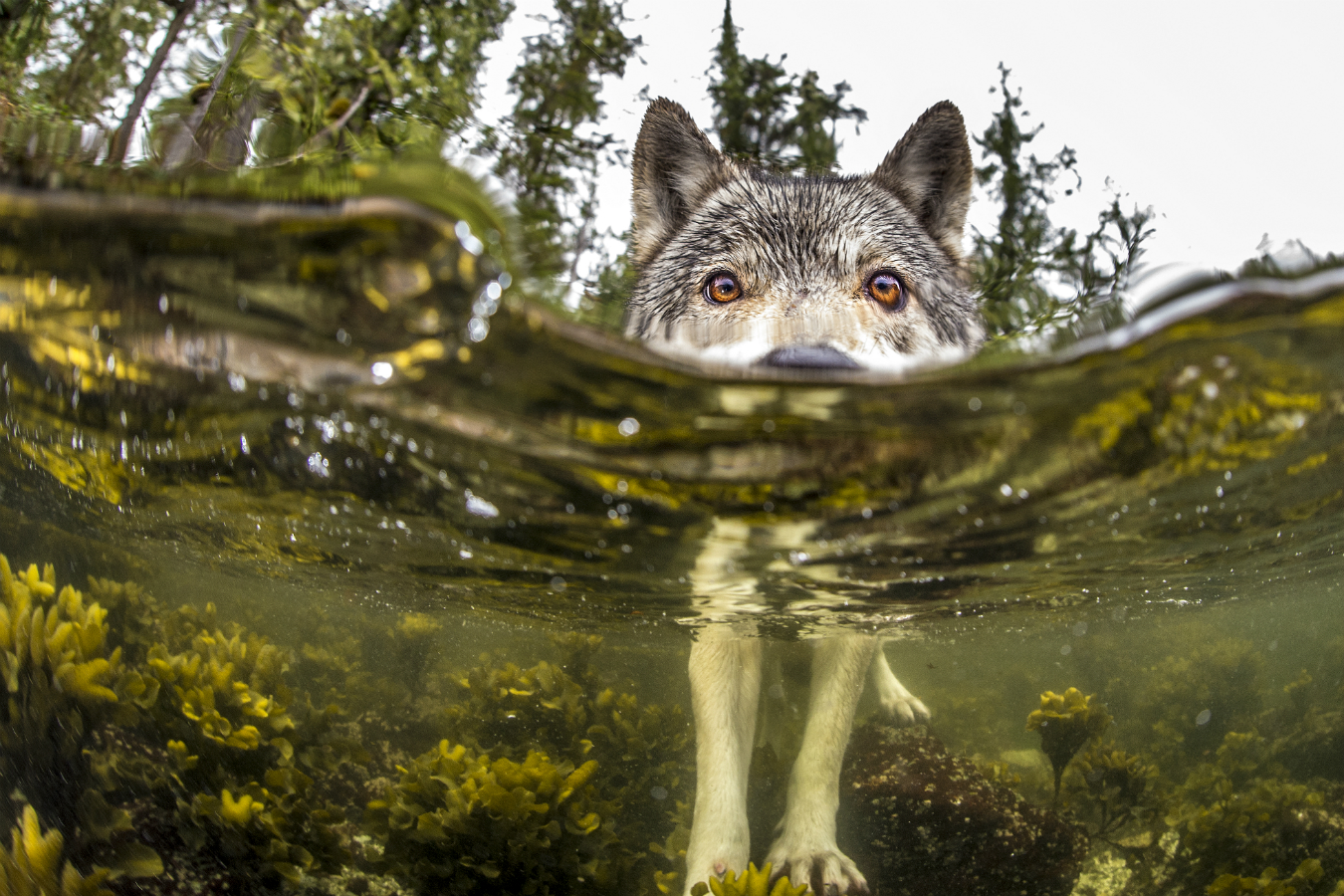 Ian McAllister can run with the wolves. Or, at least, he can swim with them.

While in Bella Bella last March to capture the incredible natural cycle of the herring spawn, the photojournalist and conservationist noticed some wolves in the water and snapped a photo that has since been seen by wildlife lovers the world over. Originally published by National Geographic in October to accompany a story about Canada’s coastal sea wolves, the photo was recently named one of the magazine’s top 20 Photo of the Day images of 2015.

“Wolves take advantage of the dropping tide after the herring spawn because it exposes the eggs along the inter-tidal zone,” McAllister explains. “So they work with the tides as it drops, and that’s when I went in the water and swam over to them and managed to get that picture.” McAllister is no stranger to getting cozy with wildlife. As executive director of Pacific Wild, a British Columbia non-profit working to protect the province’s North and Central Coast inhabitants and environments, McAllister frequently dives the deep blue and trails the lush forest—with camera in hand.

For this photo, McAllister needed to be cozy with his new furry friends. “You have to get pretty close with an underwater camera because it’s just the nature of the equipment, so they were pretty close,” he says of the wolves. “They came over and inspected me. I think they were pretty curious about a human being coming out of the water—I don’t think they’d ever seen that before.” Despite his close proximity to what is largely viewed as a vicious animal, McAllister was unfazed, saying these wild wolves do not view humans as a threat, and therefore do not react aggressively. “Because they live in such a remote part of the coast, they haven’t suffered the kind of persecution that so many other wolves have been subjected to, such as hunting and trapping,” he says. “They are really wild wolves, and I think that makes them much more tolerant of people. I think humans are just kind of viewed as part of the landscape.”

McAllister hopes that all the attention his image is getting will help educate viewers on what sets B.C.’s wild wolves apart—and start a dialogue to better safeguard them. “I think one of the main things that separate these wolves from wolves throughout rest of world where wolves exist is their strong reliance on the marine environment,” he says. “These wolves start the spring season feeding on herring and herring eggs; they’re searching the outer coastal territories for beached whales, and also hunting seals and sea lions and fishing for salmon. These are all marine-based prey items, and that makes these wolves unique behaviourally, as well as genetically distinct.” McAllister says that they deserve “special attention” but are provided with no real lawful safety; even under the new Great Bear Rainforest protection agreement, wolves are legally allowed to be killed. “I hope images like that help spark that conversation and debate so eventually we see better protection for wolves,” he says. It’s certainly a cause to howl for.

Watch a video about McAllister’s conservation work and research:

Get more great stories delivered right to your inbox .