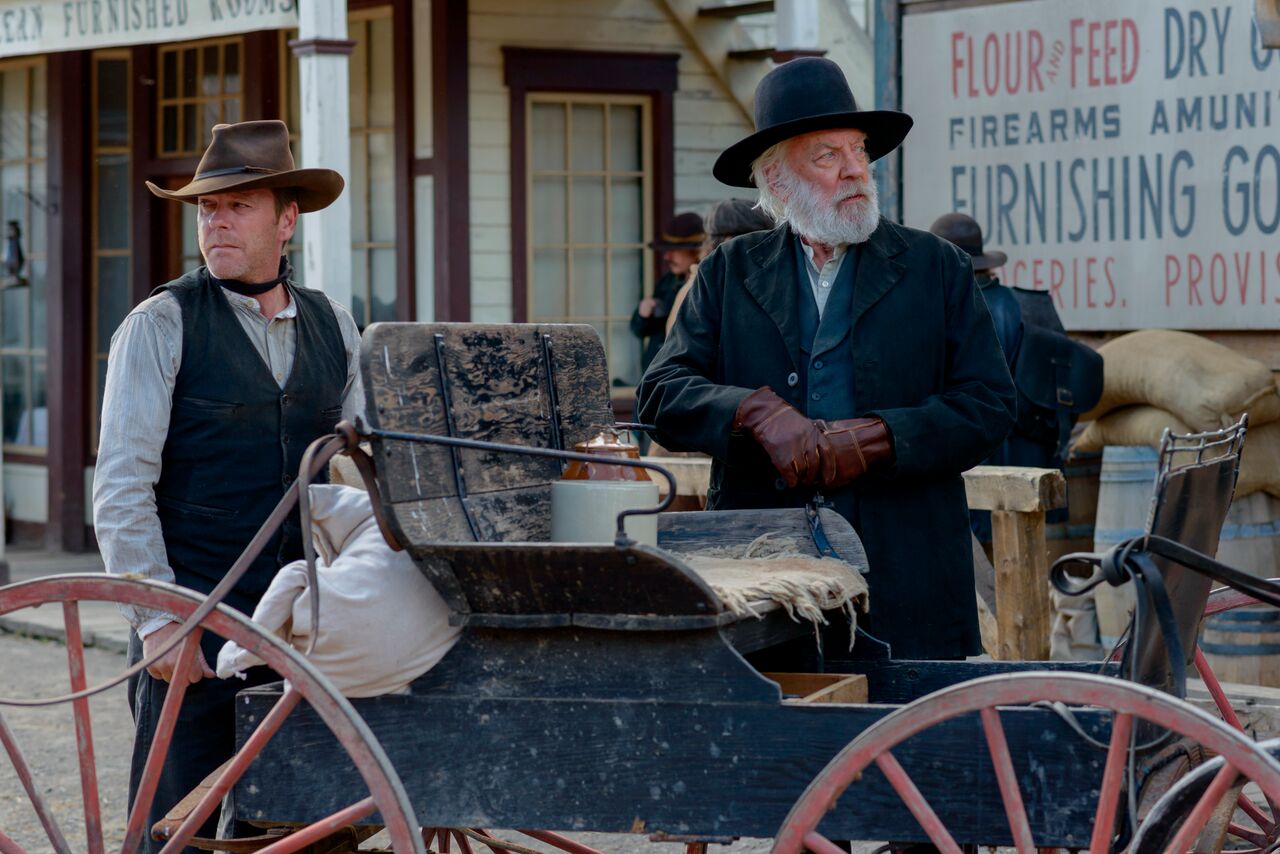 Kiefer and Donald Sutherland in Forsaken.

You could say that Kiefer Sutherland’s new film was 33 years in the making.

The British-born Canadian actor had wanted to make a movie with his father, Donald Sutherland, since his own career started over three decades ago. And with Forsaken, which recently showed at the 2015 Whistler Film Festival, dream became real life. “It was extraordinary,” Kiefer says over the phone from Whistler, where he was given the festival’s Trailblazer in Acting award. He references On Golden Pond, a film starring Henry Fonda and daughter Jane, as his benchmark for a parent-child film that both tells a compelling story and demonstrates the strong connection between the related actors, both on and off screen. That’s part of why it took so long for Kiefer and Donald to come together professionally. “It took a long time to find the right kind of story,” Kiefer says. “I had an idea for this film and I expressed that idea to the writer Brad Mirman. He wrote a beautiful screenplay, and it was as simple as that. We were fortunate enough to make it.” Forsaken tells the tale of a cowboy who, after making a series of bad decisions, tries to reconnect with his estranged father. Kiefer says the “black and white” nature of the western genre allowed the complicated father-son relationship’s “shades of grey” to flourish.

Kiefer tends to avoid his own image at all costs (“I have one mirror in the house, it’s in the bathroom, and that’s it!”), but because Forsaken is held so dear to him, he made an exception for the project and says he felt comfortable watching himself alongside his dad. But there was something else that struck him about the experience. “The thing that surprised me working with my father—I hold him in the highest regard as an actor—is that I don’t think we work very differently,” he says. “The methodology with which we work is actually very similar. I consider myself to have, as an actor, a kind of control over a character in that I know what I want to do and I set about doing that. But it’s undeniable: I was looking into my father’s eyes—eyes I’ve been looking into since I was born—and was surprised what a profound effect that had on me. All of a sudden, all the things I wanted to do with the character came so easily.”

Continuing the legacy, Kiefer’s daughter, 28-year-old Sarah Sutherland, is also an actor, perhaps best known for playing Julia Louis-Dreyfus’s daughter on Veep. Now that Kiefer has been on screen with his father, perhaps it’s time to act with his own offspring. “It’s certainly something I want to do and would love to do,” he says of possibly working opposite Sarah. “I think she’s an extraordinary actor.” It’s no surprise, either, given her lineage: Donald’s on-screen credits range from Cold Mountain and The Italian Job to The Art of War and Pride & Prejudice.

And though he has his own impressive resume (Stand By Me, Melancholia, Young Guns, 24), Kiefer was nervous to begin filming with his dad. As with any child, the fear of letting a parent down can be debilitating. “The day before we started shooting—we both worked on the very first day, the first morning—I don’t think I slept that day at all,” Kiefer recalls. “I was rolling around thinking, ‘What if he hates what I’m doing as an actor?’” But fears can be squandered as quickly as they rise, especially when one finds himself doing what he was born to do, alongside the very man who gave him life: “As nervous as I was night before, that all seemed to dissipate the second we walked on the set.”