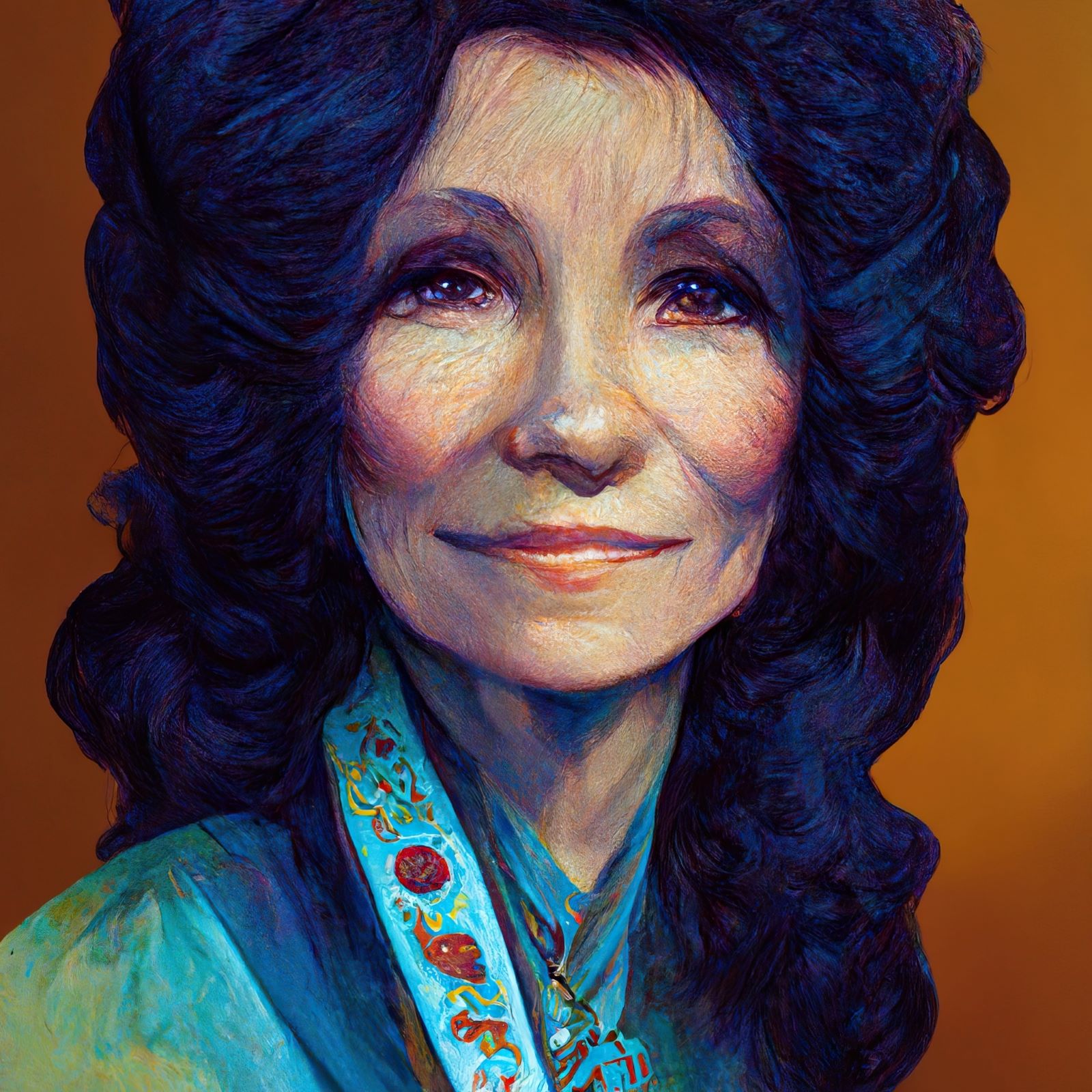 Loretta Lynn was a coal miner’s daughter from Kentucky’s hill country. Her birthplace was Butcher Hollow, pronounced “Holler,” just as potato is “tater” and tobacco is “backer” in Appalachian English. Lynn, who died last month at 90, never fully lost her regional accent as she rose from poverty and obscurity to become one of the greatest country singers of all time.

A string of 16 No. 1 hits began with “Don’t Come Home A-Drinkin’ (With Lovin’ on Your Mind),” which ironically hit the top of the charts during the week of Valentine’s Day in 1967. Many of her best-loved songs were autobiographical, including “You Ain’t Woman Enough (to Take My Man),” “You’re Looking at Country,” and “Coal Miner’s Daughter.” She did not shy from topical issues, having more songs banned by radio stations than any other artist, as the male programmers feared the reaction to such songs as “Rated ‘X’” (about divorced women), “Fist City” (jealousy), and “Wings Upon Your Horns” (losing virginity). Her most controversial was “The Pill,” a humorous song about a married woman using birth control, which became a Top 10 hit even though more than 60 radio stations refused to play it.

Lynn earned her title as the Queen of Country Music by charting 70 songs as a solo or duet artist. The first of those was a catchy number titled “I’m a Honky Tonk Girl,” which climbed to No. 14 on the charts, the first hit for Zero Records, a fledgling record label based in Vancouver.

The singer may have made her breakthrough at the Grand Ole Opry in Nashville, but she got her first big break in a chicken coop converted into a dance hall on the bank of the Fraser River, when the owners of Zero Records saw her perform.

Her beginnings were unpromising. Born Loretta Webb, she was the second of eight children dependent on a miner father who suffered from black lung disease before dying at age 52. Lynn left her family when she married at 15, just a month after attending a pie social and meeting a hard-drinking army veteran six years her elder. Oliver Vanetta Lynn Jr. was nicknamed Doolittle by locals who thought him shiftless. His young bride called him Doo.

A year after marrying, Doo and a pregnant Lynn moved to a hamlet named Custer in Whatcom County, Washington, near the Canadian border. She cleaned houses and picked strawberries. He worked (when he could find work) as a logger and farm labourer before becoming a mechanic. After locals learned of Doolittle’s history running moonshine, they dubbed him Mooney.

On Lynn’s 18th birthday, her husband presented her with a $17 Harmony guitar from Sears. She taught herself to play and sang along to the radio when not looking after their four children (with two more to come). Reading Country Song Roundup magazine convinced her she could also write songs.

The marriage was tumultuous. Doo called her a stupid hillbilly, which just made her more determined to become a singer. “I didn’t know what a key was,” she wrote in her memoir Coal Miner’s Daughter, “and don’t hardly know now.”

During a dance at the Delta Grange Hall between Custer and Lynden, she sang on stage for the first time. The band invited her back, paying her $5. A regular gig at Bill’s Tavern in Blaine helped her hone her performance for an audience of mostly Canadians who had crossed the border. At the 1959 Northwest Washington Fair in Lynden, she won the talent show against two other singers, while also taking home blue ribbons for her canning.

This success led to an invitation to appear live on television on Bar-K Jamboree in nearby Tacoma. The singer competed against 30 others, winning a wristwatch so cheap it broke the next day. But an even bigger prize was soon to come.

The show aired on a Saturday evening on KTNT-TV (later KSTW), one of the few stations available to viewers in Vancouver. That night, one of the local viewers was wealthy lumberman Norm Burley. He was managing director of his family’s B.C. Fir and Cedar Co. and well known in the city for coaching football and serving as a director of the Vancouver Mounties baseball team.

Burley used his wealth to dabble in enterprises more interesting than lumber. He invested in Zero Records, a label started in Vancouver by songwriter Chuck Williams and harmonica player Don Grashey (born Dominic Guarasci). Zero’s stable included such acts as rockabilly singer Orella Myers, from the Maritimes, whose version of the Grashey composition “Gonna Spend My Time (to Make You Mine)” was the label’s first release.

Williams and Grashey saw Lynn perform in person when she came to Vancouver to sing in a chicken coop behind a bungalow on Kent Street, just above the bank of the Fraser River. The joint was operated by the McGregors, a couple who likely enjoyed the undeclared revenue earned from serving under-the-table alcohol in the coop.

“They fumigated and turned it into a club,” Lynn told the Country Music Association in 2010. “We went into that chicken house and there were a bunch of bigwigs who came in to listen to me.”

What they heard was a singer who was as country as a jug of moonshine. Lynn reminded them of Kitty Wells. They signed her on February 1, 1960, with the promise of making a recording.

Lynn always credited Burley with her big break, even though he was merely the money man behind the label. “He said he wanted to help us by giving us a contract to make a record,” she wrote in Coal Miner’s Daughter. “He didn’t wear a red suit or black boots, but that man sure looked like Santa Claus to us.”

For her publicity photograph, she wore a jacket onto which she added fringe for a western look. Lighting was provided by a lamp without a shade, and the backdrop was a bedspread. Her husband snapped the picture.

Lynn went to Los Angeles to record four songs. It would become a popular misconception that her first record was captured spur-of-the-moment on inferior equipment. In truth, she was recorded in a first-class studio, with professional musician Speedy West on steel guitar.

Some 3,500 copies of her first 45 rpm were released as Zero No. 107, with “Whispering Sea” backed by “I’m a Honky Tonk Girl.” Lynn wrote the latter about a woman she’d seen at Bill’s Tavern who was drinking beer while crying.

Lynn described driving across the United States with her husband, the car packed to the roof with records. While surviving on bologna sandwiches, they stopped at every radio station they could find to hand a record to the disc jockey.

(Williams and Grashey told a similar story to a Canadian journalist, only they were the ones making the trek. “We’d spot a radio station tower in some town late at night, drive up to the station, and drop off a record,” Williams told Joseph M. Mauro in 1988. They slept in the car to save money and ate bologna sandwiches—“when we could afford them,” Grashey added. A 1960 article in Cash Box magazine describes Lynn travelling across the country with Agnes Mackie of Zero Records. No mention of bologna.)

However the record was distributed, the work paid off. “I’m a Honky Tonk Girl” climbed the Billboard country charts, a tremendous achievement for an unknown singer from an unlikely place. Lynn said she was so naive about the industry she had to ask what a chart was and how it worked.

A year later, she opened for country megastar Ferlin Husky at Vancouver’s Queen Elizabeth Theatre, a somewhat more refined venue than a converted chicken coop. By then, Williams and Grashey had left Zero. Burley was president, with his son-in-law Art Phillips (a future Vancouver mayor) as vice-president.

Lynn got to Nashville in 1961. After her fifth consecutive Saturday appearance at the Ryman Auditorium stage, home to the Grand Ole Opry, the Nashville Banner asked: “Is that (a) modern record for a comparatively unknown artist?” After signing with Decca Records, she would be unknown no more.

The singer returned several times to play the fair in Lynden where she had once won a talent show, not to mention blue ribbons for her cooking. The chicken coop was torn down and replaced by Vancouver Specials. Its role in the discovery of the Queen of Country Music was mostly forgotten until revived by music aficionado Michael Harling and journalist Rob Howatson. The pair fully explore the story on their Honky Tonk Girl website. Their campaign led to the Vancouver Heritage Foundation placing a plaque in the 2500 block of East Kent Avenue North in 2012.

A year later, on October 18, 2013, Coquitlam proclaimed Loretta Lynn Day in honour of her concert appearance that evening. Onstage, the Grammy Award winner told the story of her big break in Vancouver, quipping about her old record label: “Zero’s what I made them, too.”