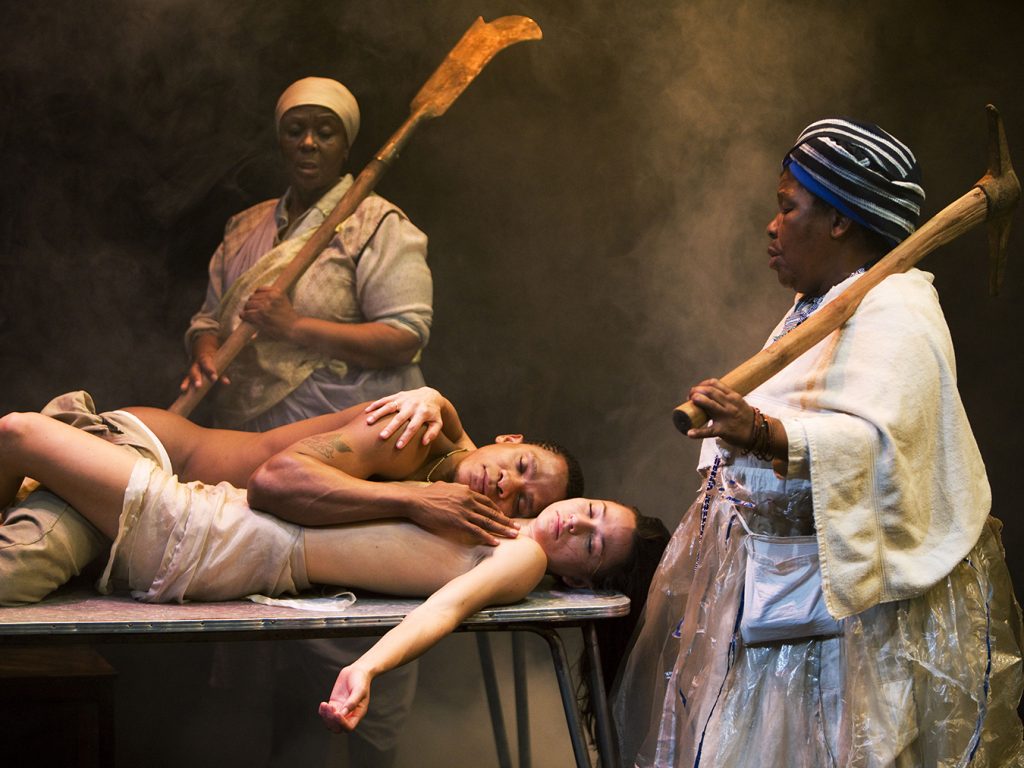 In this adaptation of Miss Julie, August Strindberg’s meditation on class warfare and sexual inequality, writer/director Yaël Farber adds the complication of colonial racism to Mies Julie by transposing the original story from an impeccable manor-house kitchen in staid 19th-century Sweden to a dusty Cape Karoo farmstead on the turbulent anniversary of South African’s Freedom Day celebrating the end of Apartheid.

Visceral in both the raw emotional sense and in the more clinical definition, Mies Julie is a play that demands limitless courage, both for its actors and its audience.

Husky-voiced and glistening in the summer heat, Julie (Hilda Cronje) descends on her father’s cracked-red-tile kitchen to tangle with John (Bongile Mantsai), her absent father’s favourite servant. Alternating between petulance, viciousness, and longing, she can’t admit her heart’s desire. John, playing off her moods, shifts between servility and mastery. Like the caged bird in the corner, both characters are trapped by circumstance, pacing around the kitchen’s Formica table sizing each other up.

When the tension finally breaks, it does so with all the subtlety of a sledgehammer. Their two bodies collide in an explosion of sweat and violence—a decision that will seal their fate.

With allusions to Antonin Artaud’s Theatre of Cruelty and even the more macabre fascinations of gore-loving filmmaker Quentin Tarantino, Farber’s raw and dynamic adaptation can be difficult to watch for those of a more sensitive disposition. Graphic to the point of discomfort, Farber’s take is anything but subtle.

Her young actors’ movement is coloured by contemporary dance as if to highlight their more vital, animal natures. Meanwhile, John’s mother (Zoleka Helesi, a role brilliantly altered by Farber from fiancé to mother), another house servant, and the spirit of one of her ancestors (the mesmerizing Tandiwe Nofirst Lungisa Ukhokho) shuffle about the room like broken beasts of burden.

John and Julie take turns holding each other at gunpoint. While the insults fly, so does the spit: in each other’s faces, across the room, interrupted only by brief bouts of passionate kissing. And, where Strindberg chose to have his heroine meet her fate offstage, Julie’s shocking final moments are squealed and squirmed out in a gush of blood centre stage.

It is powerful, powerful stuff. One leaves the play speechless and utterly exhausted by such (literally) naked desire and utter hopelessness. An answer to the conflicts between race, status, and sex may never be found, but works like Mies Julie will certainly spark a discussion—perhaps the day after.

Since its 2012 premiere at Cape Town’s Baxter Theatre Centre, Mies Julie has gone on to win several international awards as well as accolades from The Guardian and The New York Times. The Vancouver run to April 19 at the Cultch doubles as its Canadian premiere, with dates in Montreal and Toronto to follow.