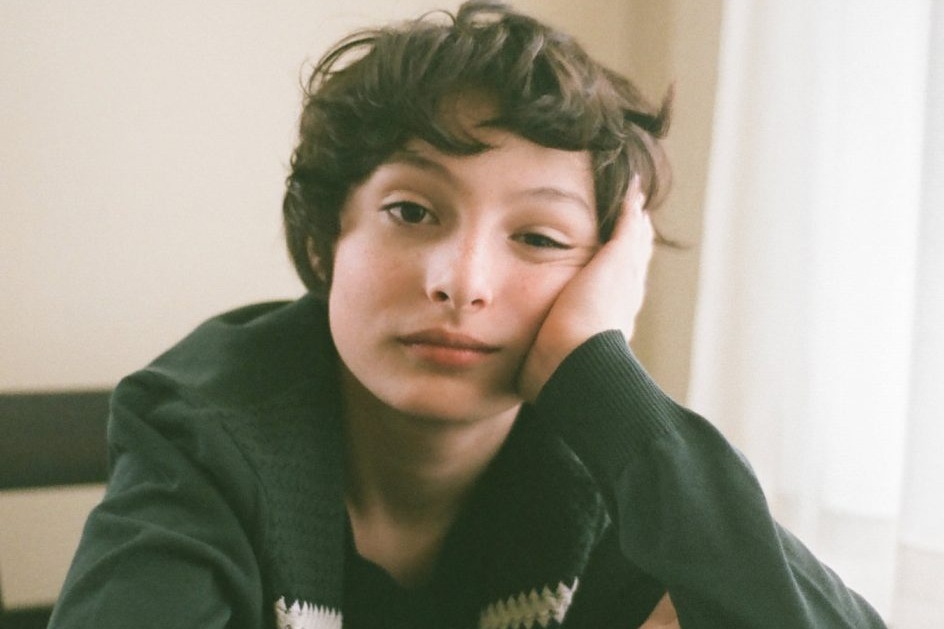 Finn Wolfhard wears a Loewe shirt from Nordstrom. Shot on location at 2400 Motel.

In this article from our Summer 2017 issue, we interviewed Stranger Things star Finn Wolfhard, right after the show’s first season took off. As we wait for news of season four’s release, we look back at the show’s surprisingly grounded young star.

Some might call this the new age of television: one in which there are so many well written, well acted, well directed shows on an array of networks, from HBO and AMC to Amazon and the game-changing Netflix, that it is actually difficult to keep up with them all.

So, in this era of small-screen riches, it is quite a feat to produce a widespread phenomenon—the kind that spans generations, that echoes in your head long after each episode ends. But that is just what brothers Matt and Ross Duffer did with their runaway hit Stranger Things. Within days of being added to Netflix’s lineup in July 2016, the 1980s-based drama that sits somewhere between The Goonies, Predator, and E.T. had legions of fans dissecting and fawning over every inch of the show, from its music, to its film references, to its actors. And at the centre of it all, in a starring role as Mike Wheeler, is Vancouver’s 14-year-old Finn Wolfhard.

“I had a feeling that people would like it, I just didn’t know how much of an overnight thing it would be,” Wolfhard says, seated at a table inside one of the 2400 Motel’s echoey suite kitchens. “What’s cool about Netflix is that a full first season gets added at one time, so you can watch any episode at any time. That’s an immediate reaction. I didn’t expect the immediate reaction.” Of course, Netflix has had other hits—there’s Narcos, and House of Cards, and the one that arguably started it all, Orange Is the New Black—but Stranger Things seemingly cranked the valve all the way, catapulting Wolfhard and his young co-leads (though the show also stars veterans Winona Ryder and David Harbour) into the public eye with the flick of a switch. Like the strings of colourful bulbs that blink on throughout the show, Wolfhard’s star has been lit up. 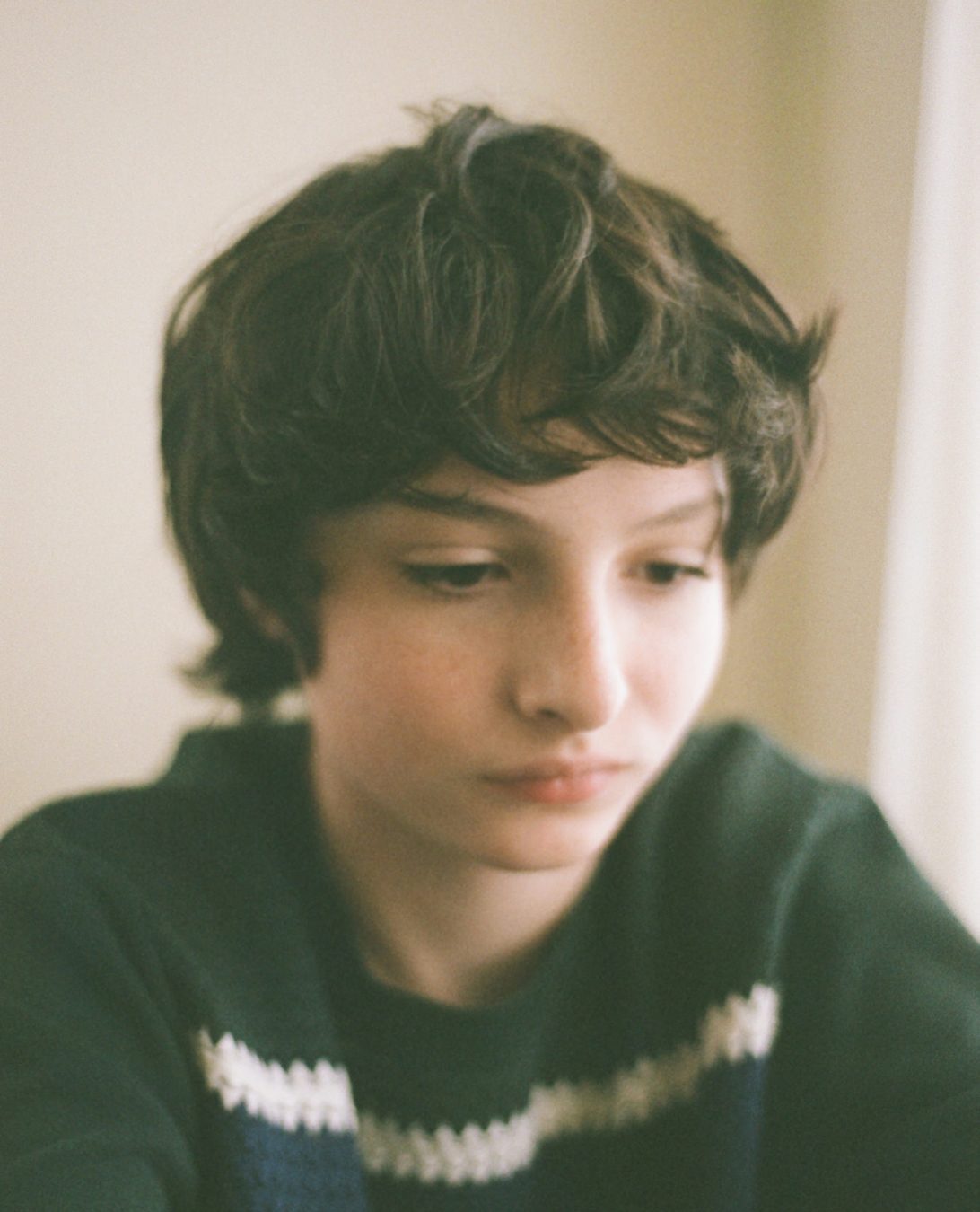 “I see people saying, ‘I love you,’ and everything, and it’s cool, it’s cool support, but you can be doing so much more than doing that,” he says thoughtfully, referring to his legion of social media fans. “You can take that love and put it into something creative. I’d rather people do that.” Wolfhard may only be in Grade 9, but he has a very distinct maturity, and a self-awareness that allows him to remain grounded despite having over one million Instagram followers. He shows up to the motel with an entourage of one: his dad, Eric (who actually stayed at this very establishment for a few days once upon a time). On the one hand, humility is not hard for a young boy, especially when success is this fresh, and he’d probably rather be playing video games than mitigating Instagram comments from disgruntled fans (this was necessary when Netflix announced two new cast members for season two of Stranger Things); on the other, though, Wolfhard’s ability to remain himself, as his father readily and amazedly points out, is a great testament to his natural character, and to his professionalism.

“I know to be grounded because I know that it’s just a job,” Wolfhard says. He paraphrases a favourite quote from comedian Bo Burnham: “He said, ‘If you’re an entertainer or actor, you’re just in the service industry—just way overpaid.’ And that’s just the best thing you could say.”

Stranger Things follows a group of boys in a fictional small Indiana town as they bike around their neighbourhood and play Dungeons & Dragons. One member of the crew goes missing and a mysterious, silent runaway girl shows up in town; there is also a freakish monster, an alternate world, and a secret experimental government agency. Ryder does a stirring job as the missing boy’s mom, but it is this bumbling, raucous, lovable group of boys—Wolfhard, plus Caleb McLaughlin, Gaten Matarazzo, and Noah Schnapp—that makes the show so sincere.

“I think what’s cool is we all sort of attached to each other from the beginning, and so going into the first scene, it was like we’d all known each other for years,” says Wolfhard. The Duffer brothers actually wrote the episodes as the filming went along, allowing each cast member to help develop his or her character—a privilege for any actor, let alone one as young as Wolfhard. “It’s a hard work ethic for Matt and Ross, because they always have to be writing,” he explains. “But it always pays off.”

It’s a Sunday, and Wolfhard has been lounging in bed most of the day, his mop of curly brown hair slightly tousled, his big eyes and pointed features softened by his obvious comfort in his own skin despite being in the peak of turbulent adolescence. 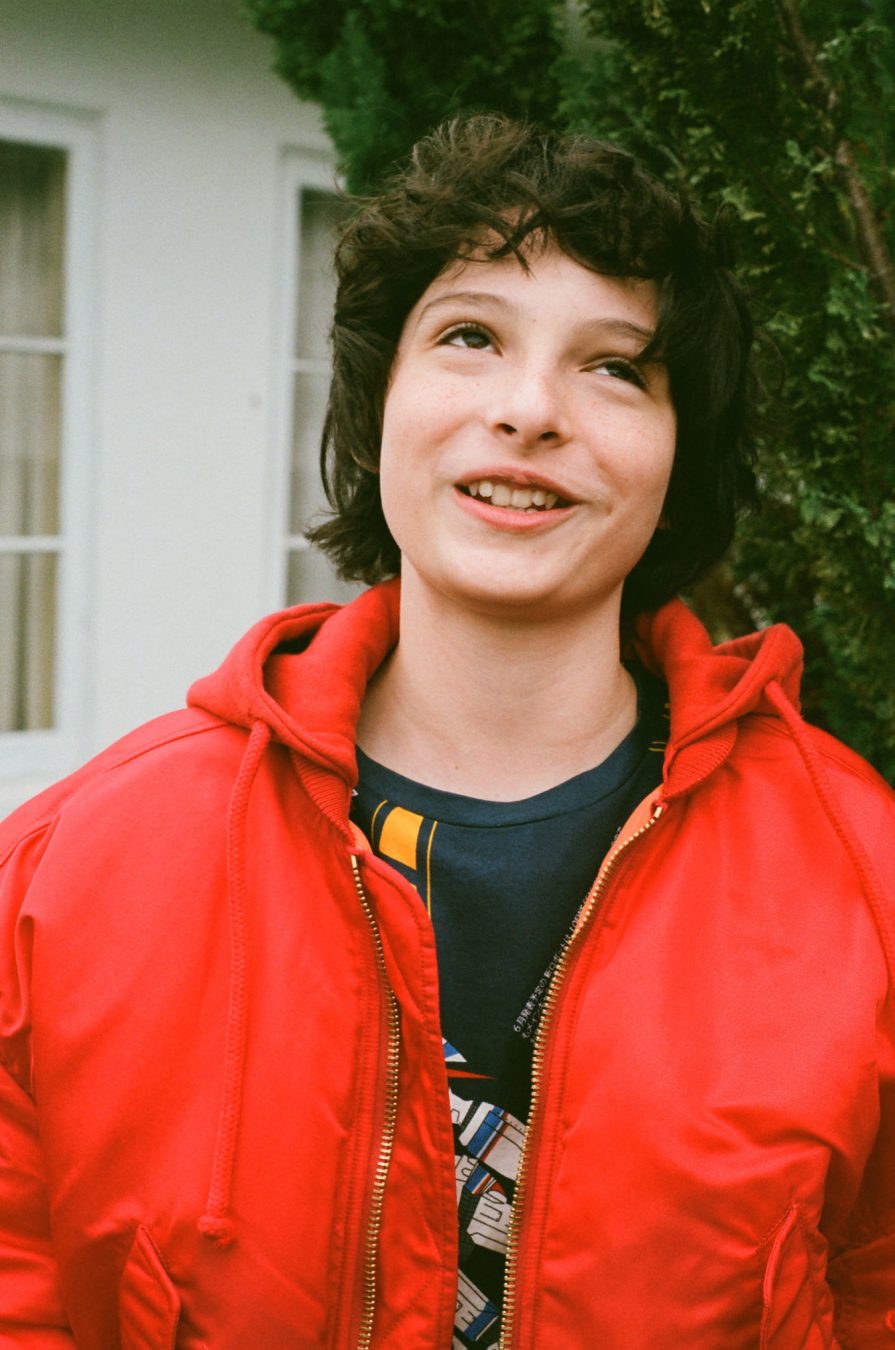 Wolfhard wears a Loewe shirt and Vetements jacket from Nordstrom.

Wolfhard grew up watching movies, particularly from the ’80s, and credits his favourite pastime with sparking his appetite for filmmaking. He loves Young Frankenstein and Pretty in Pink and Léon: The Professional, and thinks Drew Barrymore needs to start directing again (she hasn’t done a feature since her debut, Whip It). Wolfhard hopes to direct his own films one day, and already writes screenplays when he finds the time. “Just something about directing my own script makes me feel better about the industry because I have more power over it, which sounds so selfish,” he says. “But I’ve had that passion to control movie-making for a long time.” Wolfhard is crammed with ambition, so now it’s more a question of when, not if—especially when you remember that he’s still in high school.

“High school’s hard for me because I have to keep flying away from it,” says Wolfhard, who has also appeared on The CW shows Supernatural and The 100, and stars in the highly anticipated forthcoming remake of Stephen King’s It. “That’s what’s hard about my school for me, is that I have to keep leaving. I can’t really experience the full thing.”

It must be hard to miss out on an actual kidhood, to forego lockers and crushes in favour of long working hours and high-stakes appearances (The Tonight Show Starring Jimmy Fallon, as one instance; a visit to the White House to meet then-President Obama, as another). “I love acting, but there can be times where I’d love to be back experiencing real school,” he says, looking pensive for a moment. A split second later, though, he perks up: “But I love acting too much to even care.” He says “love” in a way that enunciates the “lo”, letting the L rest on his tongue for a moment before curving into the rest of the word. It emphasizes his commitment to the work, and also perhaps echoes an inner voice that can’t quite believe he’s gone this far this quickly.

Like any actor, he adores some of his scenes, and cringes at others—but Wolfhard keeps a level head about that, too. “You’re always going to critique yourself,” he says, and then lifts up his hands and smiles, speaking in an over-the-top commercial voice. “I mean, what better to do as an actor?”

In just one week, Wolfhard will leave his friends and family in Vancouver—although one parent always travels with him—and head to Atlanta to start filming season two of Stranger Things. That’s what he is focusing on right now: his work, his love. The rest will unfold when it needs to. “I was just talking about going to college, and I don’t know. Going to college for me is like, if I did go—I don’t really have any interest in going, but if I did go—I would go for film, obviously. For directing,” Wolfhard says. “But the set is the best school on earth, so I think I’m just going to stay on set.”

This article from our Summer 2017 issue was originally published on June 16, 2017. Read more Arts stories.