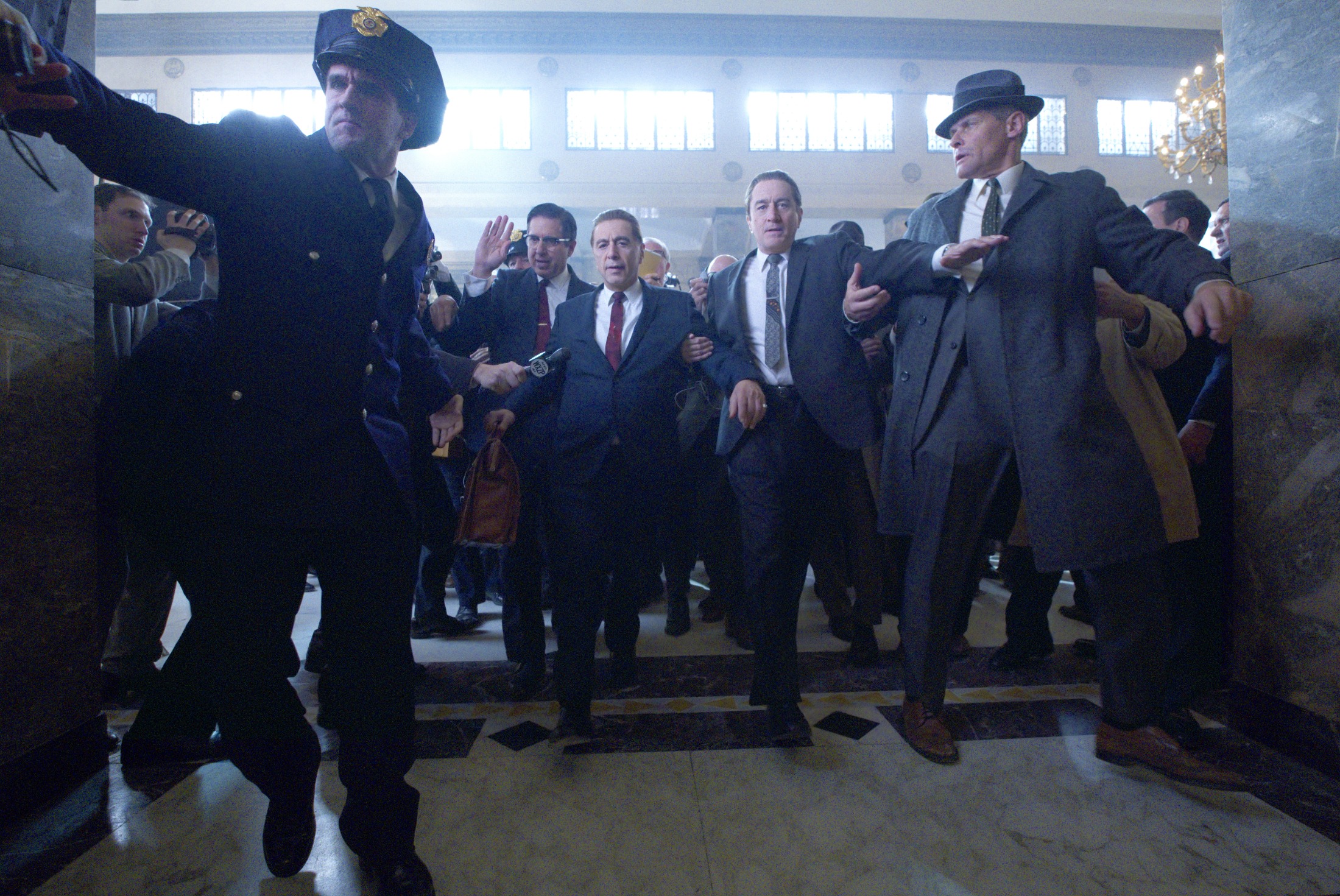 When a senior mobster leans in and says, “I heard you paint houses,” we know the last thing he has in mind is refreshing his stucco. This is a Martin Scorsese movie, after all, and it stars a trifecta of acting talent that knows how to play tough: Robert De Niro, Al Pacino, Joe Pesci.

The Irishman, Scorsese’s three-and-a-half-hour epic, is based on Charles Brandt’s bestselling true crime novel that follows Frank Sheeran (De Niro) as he moves from small time crook to the righthand man of Pennsylvania don Russell Bufalino (Pesci), and close friend of murdered union leader Jimmy Hoffa (Pacino). The book—I Heard You Paint Houses—is subtitled Frank ”the Irishman” Sheeran and the Inside Story of the Mafia, the Teamsters, and the Last Ride of Jimmy Hoffa. In Scorsese’s hands this base material becomes elevated to a history of post-Second World War America viewed through the prism of corruption, self-aggrandisement, and machismo.

The director, of course, has form: Mean Streets, Goodfellas, Casino—the cultural blueprints that have influenced our popular image of the underworld from The Sopranos to Breaking Bad and beyond. The actors, too: The Godfather, Scarface… Pesci shooting a young Michael Imperioli (who would become The Sopranos’ Christopher) in Goodfellas. All three bring their A game but Pesci is a revelation in restraint, the aging boss quietly managing all the strings.

The Irishman feels like, if not the genre’s swan song, at least the last word; Scorsese is pulling the plug—draining that swamp—tying up the loose threads of myth and nostalgia into a searing treatise on everything that’s wrong with the gangsterism that has driven the U.S. since the Wild West. A country where democracy takes a back seat to greed, presidents are bought and paid for, and charisma is a smokescreen for fraud.

And where does that leave us?

In an early scene, Sheeran takes his young daughter to the grocery store where, she has told her mother, the shop owner pushed her. What follows changes everything for her: she sees who her father is, what he is capable of; she connects the dots. A silent presence, Peggy (Anna Paquin) is the film’s (and our) conscience. This movie may be about men, but Peggy is the character Scorsese invites us to identify with, who refuses to look away, who judges, who will not become complicit. Peggy is the future—if we are prepared to take a stand.