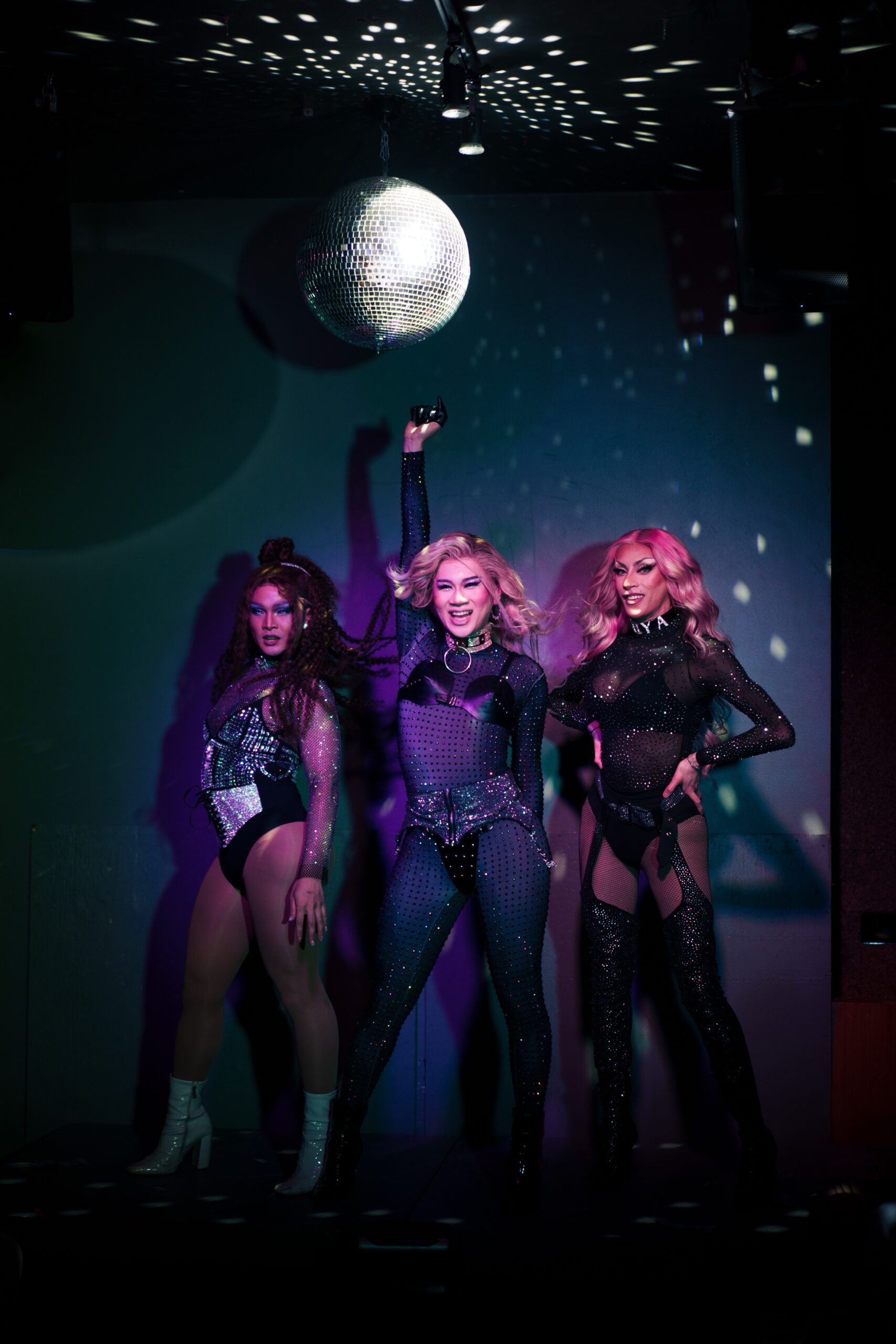 The audience waits breathlessly under a slow spinning disco ball. They’re shoulder to shoulder encircling the small stage, cocktails in one hand and five dollar bills in the other, ready to tip their favourite performer. Finally, a spotlight beam settles centre stage and, with the upbeat lyrics of “Big Slaysian Energy” pouring from the speakers, out stomps the bearded drag mother of the House of Rice, Shay Dior, in a belted kimono, thigh-high stiletto boots, thick-painted eyebrows and pencil moustache.

The lyrics “I’m the empress, on your knees, House of Slaysian, dynasty” reminds the audience exactly what they came for: an all-Asian drag show taking the stage on Davie Street—Dynasty.

Dior (who like several of the performers uses they/them pronouns) is one of the four hosts of Dynasty. For the past six years they have defined their drag style, a non-gendered blend of masculine and feminine laced with elements of their Vietnamese heritage, and worked to bring Asian talent—⁠⁠⁠a highly under-represented group of drag artists—toward the centre stage of Vancouver’s drag scene. Their drag house, the House of Rice, is the only all-Asian drag family in Vancouver. 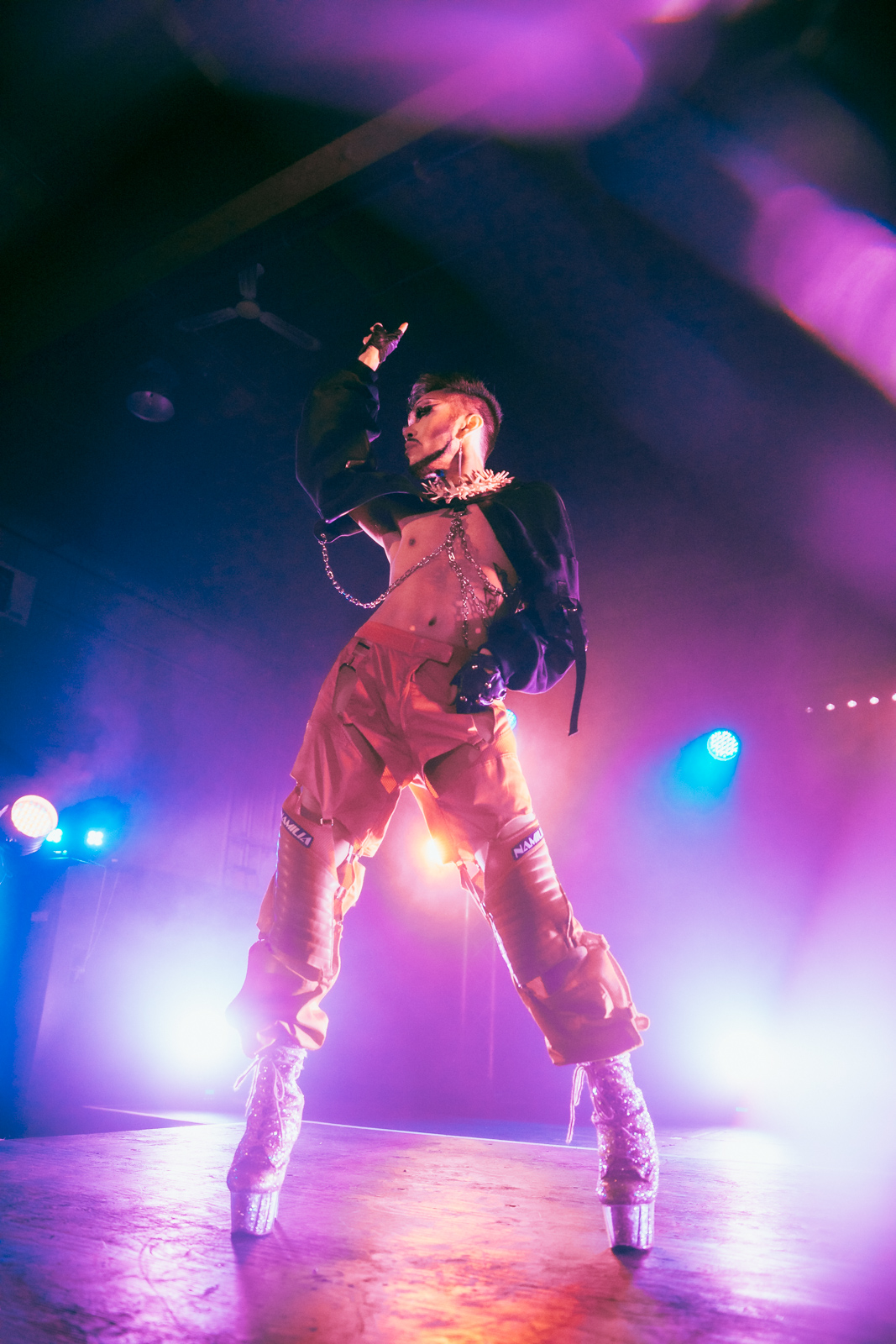 “[Asians] were just kind of ignored or invisible. I think it also doesn’t help that we are taught in our cultures to sit and not make a scene and to just keep your head down and just do what you need to do and that’s how you’re going to succeed,” Dior says during a phone interview tucked into a busy schedule between events and work.

With weekly shows like Dynasty gaining momentum, the visibility of Asian drag is growing. There are also larger celebrations of the queer Asian community through Ricecake—an event spearheaded by Dior that recently celebrated its 4th anniversary—and youth-friendly events such as Drag and Dim Sum put on by the House of Rice.

The Dynasty show on May 24th was a unique evening, with all four talented hosts on the roster. For Rose Butch, it was a debut. Their slight frame accompanies a bold personality as they take the stage, crushing female power ballads and songs full of teenage angst. Their look is campy and fun, with dramatic makeup, pink berets, and bright florals.

Butch, who is Nisei (second-generation Japanese) and mixed race, and calls themself a “non-binary Drag Thing”, uses Dynasty to feature artists who a general audience may not realize are of mixed-race and Asian heritage, such as Olivia Rodrigo. They also explain how shows like Dynasty can help shatter harmful stereotypes about Asians, Asian artists, and queer Asians.

“Asian communities across North America have had a really rough last couple of years with the influx of anti-Asian violence that we’re still witnessing and experiencing today,” Butch says over the phone, a somber tone replacing the vivaciousness of their performance voice.

“Especially with Dynasty [where] we have four hosts that are all quite different in our approach to drag and how we express that, and all coming from different backgrounds, I think it’s important to show the diversity and the talent and to celebrate that and to show that we can be whoever we want to be and it is not predetermined by harmful stereotypes or what people might assume about us based on our background.”

Performer Kara Juku took the stage next, contrasting Butch’s campy teenage angst with fast-paced choreography and upbeat pop songs. With legs for days, Kara Juku features plenty of body in plaid skirts, bright pleather, bustiers, boots, and long, colourful hair tossed around liberally as she works the stage. High kicks and death drops are a specialty—during her numbers audience members get a full demonstration of iconic drag moves and why the extended area in front of the stage is necessary at Dynasty shows.

Juku was the host of the original show that inspired the creation of Dynasty—a show at 1181 that paid homage to Rina Sawayama and the K-Pop group Blackpink.

For the audience, that show was more than just a showcase of popular Asian artists, shares Bibi SouPhresh, the fourth and final host to take the stage at Dynasty. 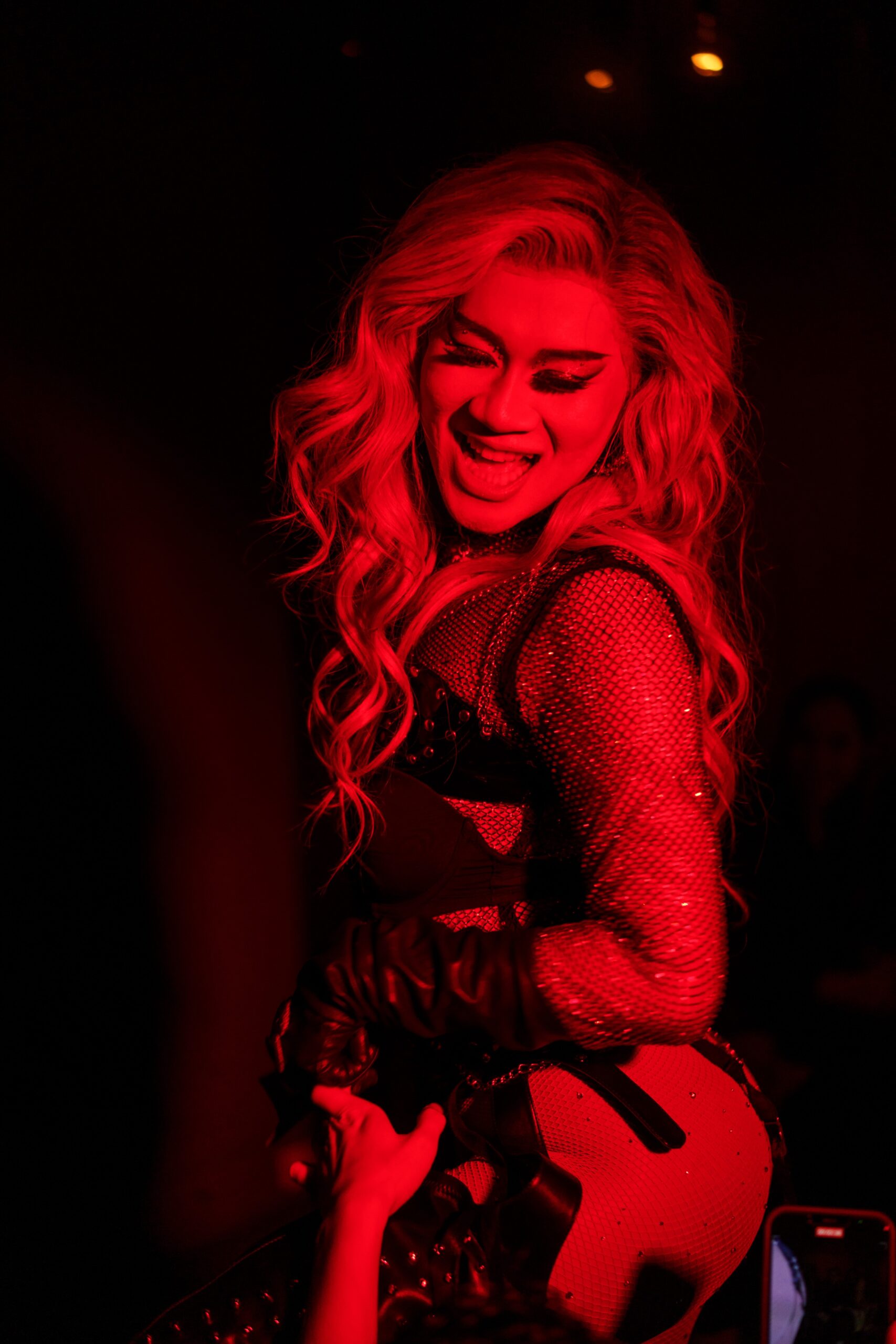 Bibi SouPhresh performs at a Dynasty drag show at 1181, a LGBTQ+ club on Davie Street. Photo by Cale Tian | @cale.arw.

“People were saying, ‘Thank you for doing that,’ not just because I performed their favourite song, but because they could see me as an Asian drag representative on stage.”

SouPhresh is everything glamorous and diva, with bright colours, neon lingerie, sequins, Beyonce moments with an electric fan—which one of the other performers will rush out to turn on before her entrance—a dedication to self-taught sassy choreography, and perfect hair that she styles herself. Out of drag, Bibi SouPhresh is Freddy Sim, a professional hairstylist who has just as much personality and fashion freshness in person as Bibi does on stage.

Sim moved at age 17 from the small, Muslim Southeast Asia country of Brunei to Vancouver, where he discovered drag and its power as art and self-expression. As Bibi, he also quickly discovered how few Asian drag artists were in Vancouver’s scene.

“When I first got to the scene, you could count on your fingers how many Asian drag queens there were,” Sim says over coffee with the same contagious laugh, energy, and smile that he shares on stage as Bibi SouPhresh. “Now, I think we’re just taking over. It’s so cool. There are very young queens coming out that just want to do it.”

He thinks the challenges of being raised in a traditional Asian culture where gender, sexuality, and self-expression are often suppressed, have contributed to Asian drag artists taking longer to step into the spotlight. “You’re supposed to grow up, go to school, go to afternoon school, get good grades, marry your high school sweetheart, have kids, and repeat,” Sim says about his childhood and home country.

As the night draws to a close, Shay Dior, with their easy banter and well-established charisma, welcomes the performers back for a final number. The stage at 1181 is already cozy, even more so when graced with the boots, thigh-highs, and stilettos of all four of Dynasty’s hosts in coordinated outfits. 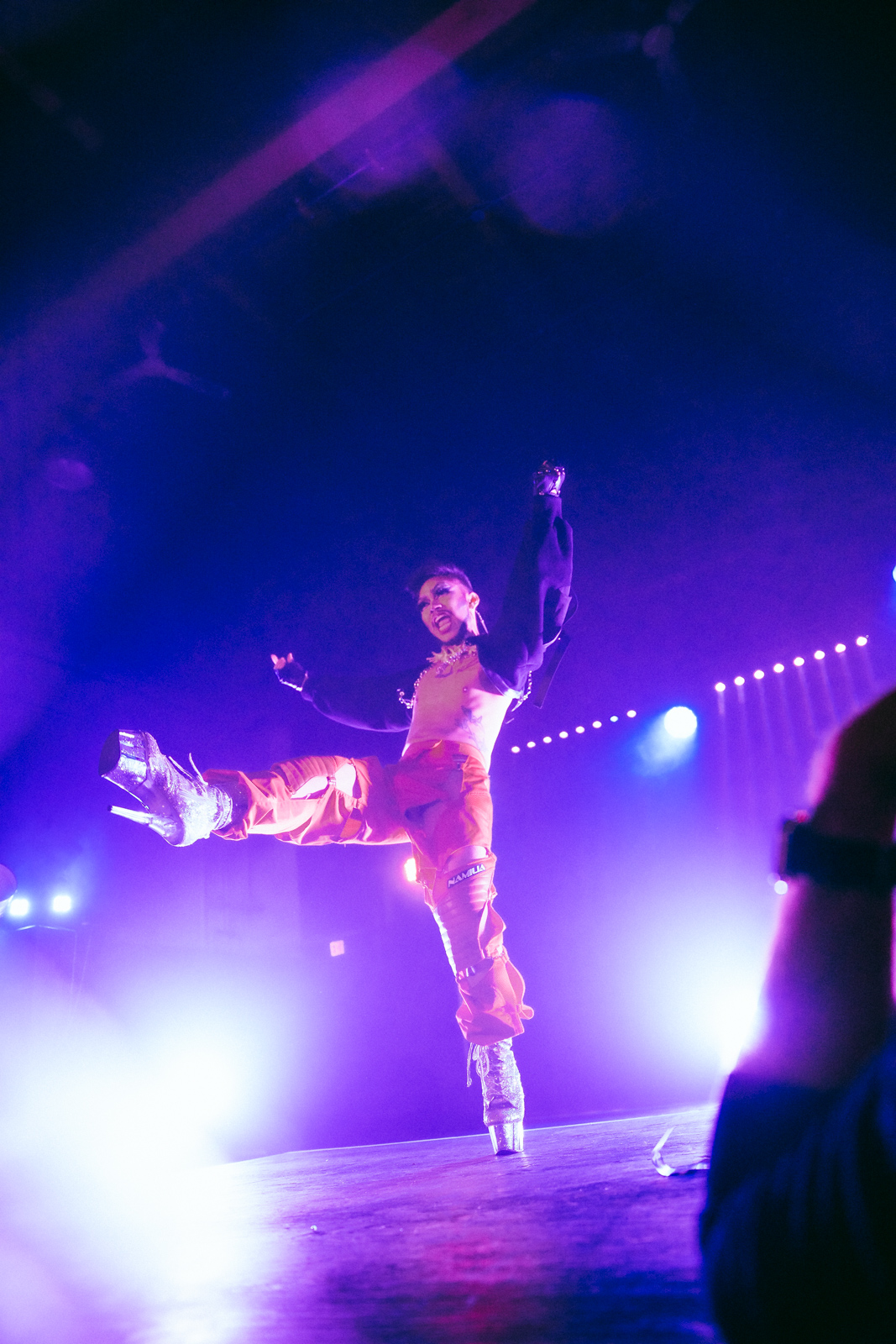 Shay Dior commands the stage at a RICECAKE show with with their trademark thick-oainted eyebrows and pencil moustache. Photo by Caleigh Mayer | @caleighkats.

Stepping out into the crowd, Shay Dior, Kara Juku, Rose Butch, and Bibi SouPhresh shut down the night with the final number, seeking to make a lasting impression, an intimate connection with their audience.

For Dior, the impact they hope to make—not only with Dynasty, but also Ricecake, the House of Rice, and every performance that may come—is encouraging young drag performers and queer Asians, alongside everyone else, to explore their gender, selves and identities.

“My angle is to motivate everyone to live as authentically themselves as possible,” they say. “Whatever that may be, I just hope that everyone can learn to love themselves and explore their feelings and identity because I think there’s so much to be discovered within yourself.”