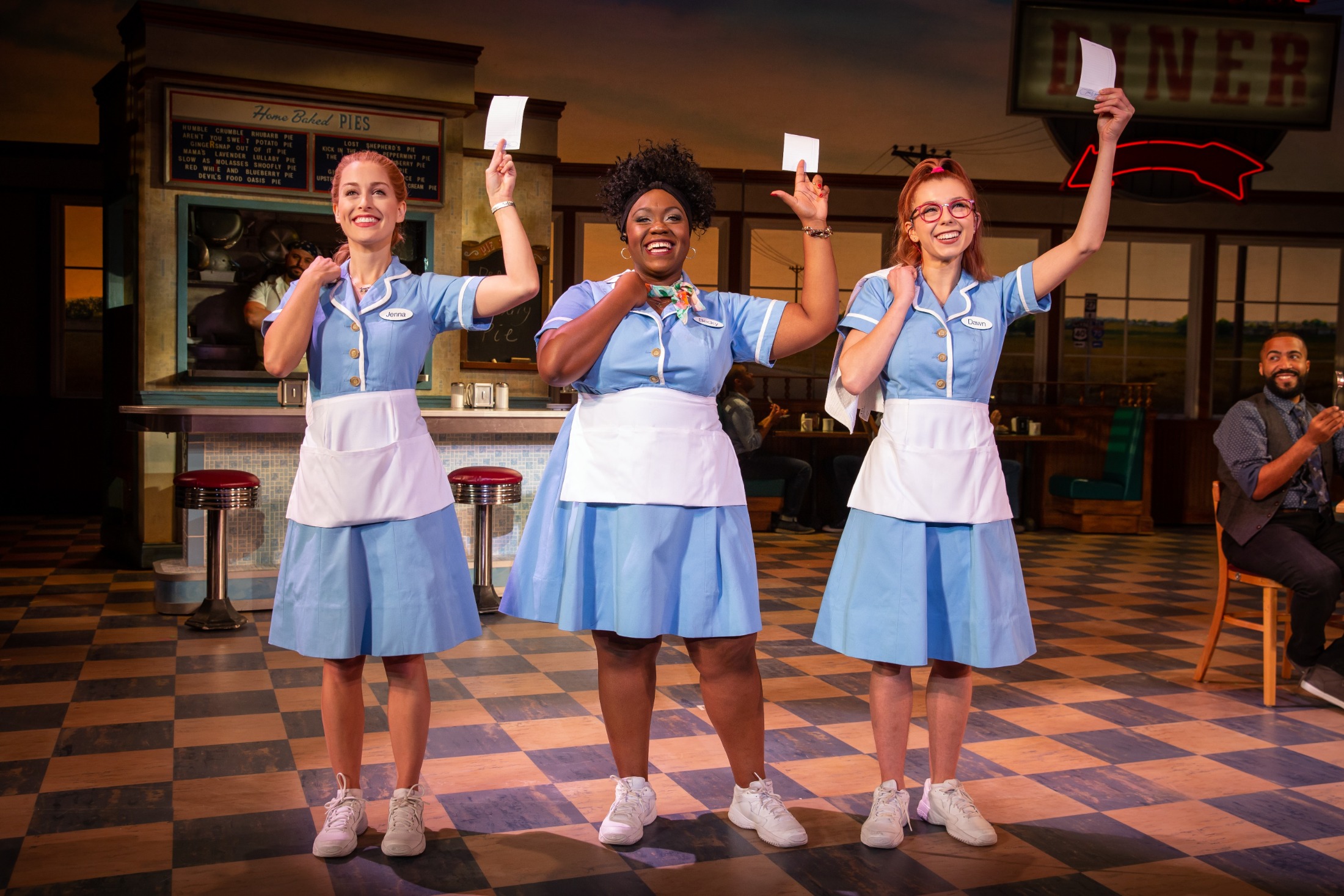 Bailey McCall as Jenna, Kennedy Salters as Becky, and Gabriella Marzetta as Dawn in Waitress. Photo by Jeremy Daniel.

There is a trail of powdered sugar leading you through the deliciously sweet musical Waitress. Jenna is trapped in a loveless and abusive marriage when she discovers she is pregnant. Without hope or a way out, her only escape comes from baking her complex emotions into pies at Joe’s Pie Diner where she is (you guessed it) a waitress.

Her inner turmoil manifests itself in baked goods with inventive ingredients and even more inventive names, like “Betrayed By My Eggs Pie,” also known as “I Don’t Want to have Earl’s Baby Pie.” Throughout the musical, Jenna’s interluded pie recipes become a motif that defines her character’s development, as she tries to bake herself a new life.

It also provides a few cheeky Easter eggs for the audience to pick up on when the specials on the menu board in the diner start to change. (Like when Jenna strikes up an affair with her new gynecologist and an “afternoon delight” pie suddenly appears on the menu.)

Ultimately, Waitress is a story about the pursuit of happiness for all of the characters who enter the diner as they navigate affairs, falling in love, and their lots in life stuck in a small town.

The story is based on the 2007 film of the same name with music and lyrics by Sara Bareilles, a woman with a famously unique and powerful voice. So, it follows that the melodies are also deceptively complex. There is also the added difficulty that the music is largely sung in heavy southern accents which can prove a challenge for even the most veteran singers when the time comes to belt it out. Some of the cast rise to the occasion note-perfectly while others have to hedge their bets in order to execute the choreography. However, it’s likely only musical superfans who have the soundtrack memorized (like I do) will notice.

No one will ever compare to Jessie Mueller’s Jenna (for which she was nominated for a Tony Award in 2016), but Bailey McCall has an incredible voice that leads the rest of the cast. Other standouts include David Socolar who plays Jenna’s gynecologist, Dr. Pomatter, and Kennedy Salters who plays Jenna’s friend and fellow waitress Becky.

What the weaker singers lack in vocal power they make up for in their acting chops (and vice-versa), consistently delivering laugh-out-loud moments. Brian Lundy’s Ogie—the quirky love interest to the equally quirky waitress Dawn—was the darling of the evening as he so often had the audience in stiches. Overall, the cast is a well-balanced mix of well-cast actors and singers who put forward a delightful performance that charmed us all. You’ll leave with a sweet tooth and a smile.

Waitress the musical plays at the Queen Elizabeth Theatre until Nov. 17, 2019.