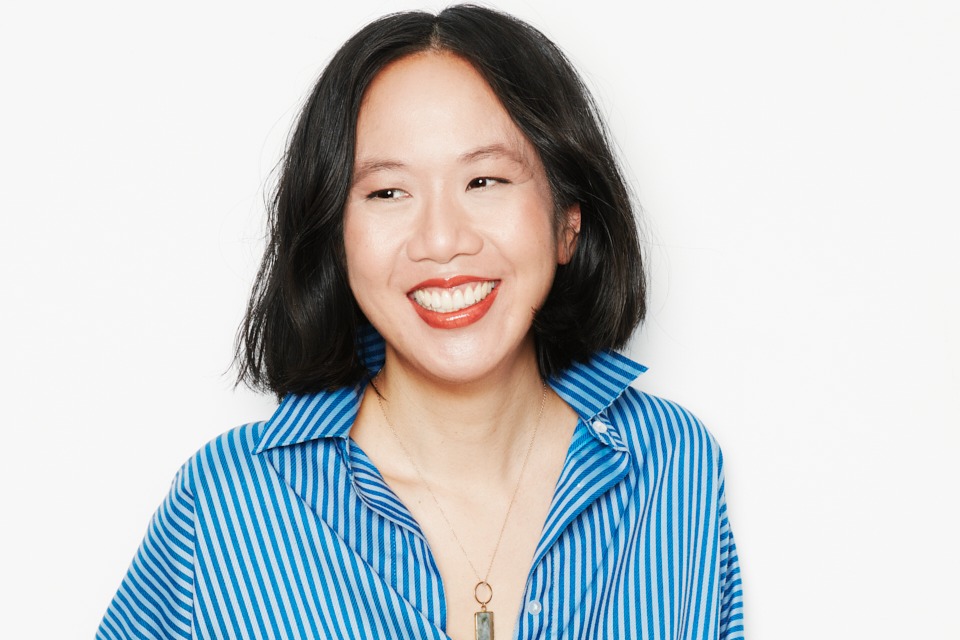 It’s almost midnight, and my son has been in bed for four hours. My dog is under the covers, snoring on my feet. I’m still up, though, headphones plugged into my laptop as I watch YouTube makeup tutorials, one after the other after the other. My days always start at six in the morning, and I should really be asleep by now. Instead, I’m squinting at the screen, pausing the playback as a pretty blonde hovers her kabuki brush over her cheeks. Maybe this time, I think, I really will learn how to contour.

I am 42 years old, with a beauty routine that I would call reactive, meaning that I try to hide the parts of my face that I resent: straight lashes, a broad nose, the brown freckles that dot my cheeks and temples. In the mornings, I am never happy with what I see in the mirror, which is this: a tired single mother whose Asian eyelids will never hold an ombré shimmery shadow, whose makeup time is wedged between walking the dog and making breakfast.

Sometimes, I feel like I’m 14 again and the year is 1990—a time when I avoided my own reflection as much as possible; when I hid behind pink hair and huge glasses as I stomped my way down Vancouver’s grubby Granville Street; when it was easier to pretend I didn’t care about makeup at all. But in 2018, video tutorials and Instagram feeds make the process of beautification impossible to ignore. Step-by-step instructions and perky influencer hosts promise a more beautiful me—a solution, perhaps, to the lack of confidence that has plagued me for most of my life.

The 1990s were a time of acceptable eccentricity. Movies like Singles and Reality Bites are examples of how that decade was styled (big pants, undone hair, brown lipstick, chunky boots), but what they leave out is how the grunge era also gave people who were deeply uncomfortable in their own skin the permission to hide. Those giant flannel jackets and denim overalls concealed everything I could possibly feel self-conscious about. Like most teenagers, my body was changing rapidly, and I wasn’t familiar with the shape it was growing into. The angles on my face were new and scary, but with my toque pulled low and my collar buttoned high, my physical self could disappear.

In 1990, visual and personal makeup instruction was really only available at department store beauty counters. With my Value Village corduroy pants, extra-large concert t-shirts, and deep social anxiety, I was terrified of walking up to the Estée Lauder or Elizabeth Arden counter and asking for help. The women who worked there were fearsomely polished, their cheekbones rosy and powdered, their hair frosted an icy blonde. I had acne, uneven bangs, a skin tone that was not quite tan and not quite olive. I didn’t know what a crease was, or a cupid’s bow, or even a cuticle. 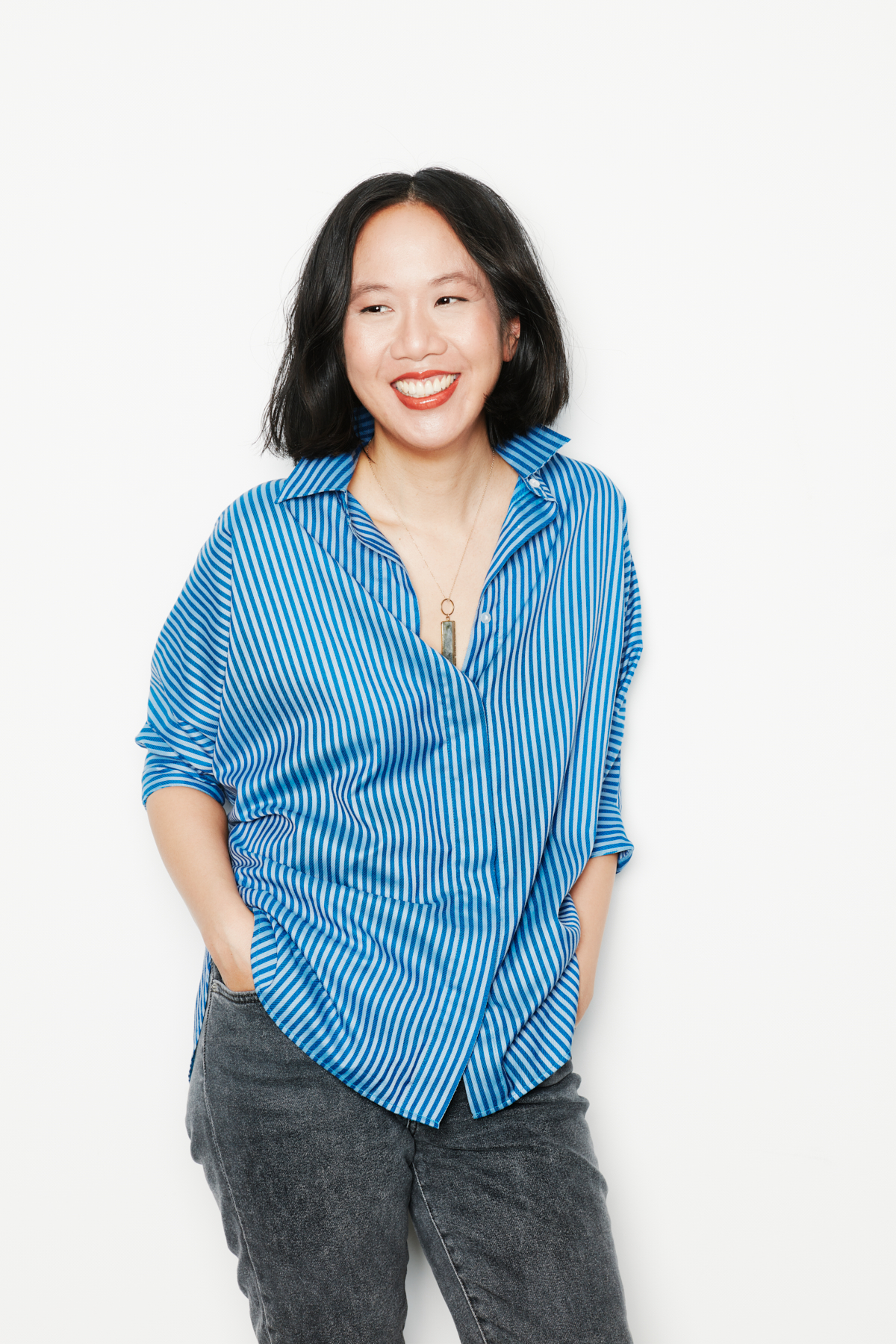 And deep down, I knew that my discomfort was not solely about makeup. It was about my face, which like many Chinese faces, includes heavy eyelids, invisible cheekbones, and wispy eyebrows. The ’90s supermodels—Christy, Cindy, Naomi—didn’t look anything like me. The famous young women I wanted most to resemble—Juliana Hatfield, Lisa Loeb, Jennifer Connelly—didn’t look anything like me, either. I could dress like them, but there was no makeup in the world that would make my nose thinner or my jaw more defined. And so, I didn’t even try.

Social media has changed many industries by giving people the tools to communicate across distance and cultures, forging connections between companies and consumers that have become far more intimate than we ever thought possible. And for every product, there is a spinoff industry of influencers: people who review and broadcast their opinions on Instagram and YouTube. Their followers can number into the millions; according to Forbes, a top YouTube influencer can make up to $300,000 U.S. for a single sponsored video. And beauty influencers—often pretty, seemingly honest—are among the most prominent.

Makeup, unlike clothing or fitness, offers immediate and accessible transformation. Weight, appearance, race, gender, and income level don’t matter. Today, good makeup is offered at every price point. And influencers have accumulated loyal followings because they show us how to use every kind of tool available, and how to address every kind of skin concern. For young people who are just exploring their relationship with their outward appearance, this instruction—at home, easily paused and replayed—is safe and private. The possibilities are breathtakingly endless for people who are not confined by the gender binary, who have disabilities, whose skin is a challenge to match, who struggle with confidence.

There are no secrets anymore—only tutorials illuminating the fact that beauty is something we are all entitled to.

The right influencer can hold a brand accountable for issues such as an absence of skin tone options, or a lack of diversity in its marketing. And they have made space for people to unabashedly love makeup, to no longer be ashamed of enjoying something seemingly frivolous, even though its effects are often not frivolous at all. Makeup can lift a mood, enable someone to more confidently step out into the world. It can broaden the discussion on what it means for people who identify as feminine, not to mention our perceptions of beauty and respectability. And it is this transformative power that influencers can also exploit.

Because, at the end of the day, the influencer industry is a business, with personalities using their followers to generate revenue from companies that will pay for an ad or a positive review—something that many influencers do not acknowledge, making their reviews suspicious at best and a betrayal of their followers at worst. But the dark side of the business goes even deeper than that. The existence of influencers depends on our innermost relationships to ourselves; in order to want to be more beautiful, we have to feel that we are not beautiful enough.

More than ever, it’s possible today to learn how to make up my face the same way professional artists do: I can find the right brushes, learn how to paint an Asian eyelid, watch reviews on foundations suited for my skin. This is, without a doubt, empowering and inclusive. There are no secrets anymore—only tutorials illuminating the fact that beauty is something we are all entitled to.

The desire to be prettier, or better than our natural selves, is a human constant. And the core of any self-improvement industry is grounded in that self-dissatisfaction, that nagging feeling saying we could be happier or wealthier if we could just change a few things. However, the tools and instructions have also levelled the playing field and made doing makeup an accessible act. This is an enormous source of comfort; makeup can be a shield and a balm, protective and healing at once.

My personal relationship with beauty will always be complex and imperfect. I cannot ignore the commercial aspect of applying eyeshadow and buying that new blush. But with my makeup on, I feel like a person who is capable, whose highlighted and powdered face indicates that I actually like myself. At 42, this is a magical feeling.

This story from our archives was originally published on May 9, 2019. Photos courtesy of Jen Sookfong Lee. Read more personal essays.