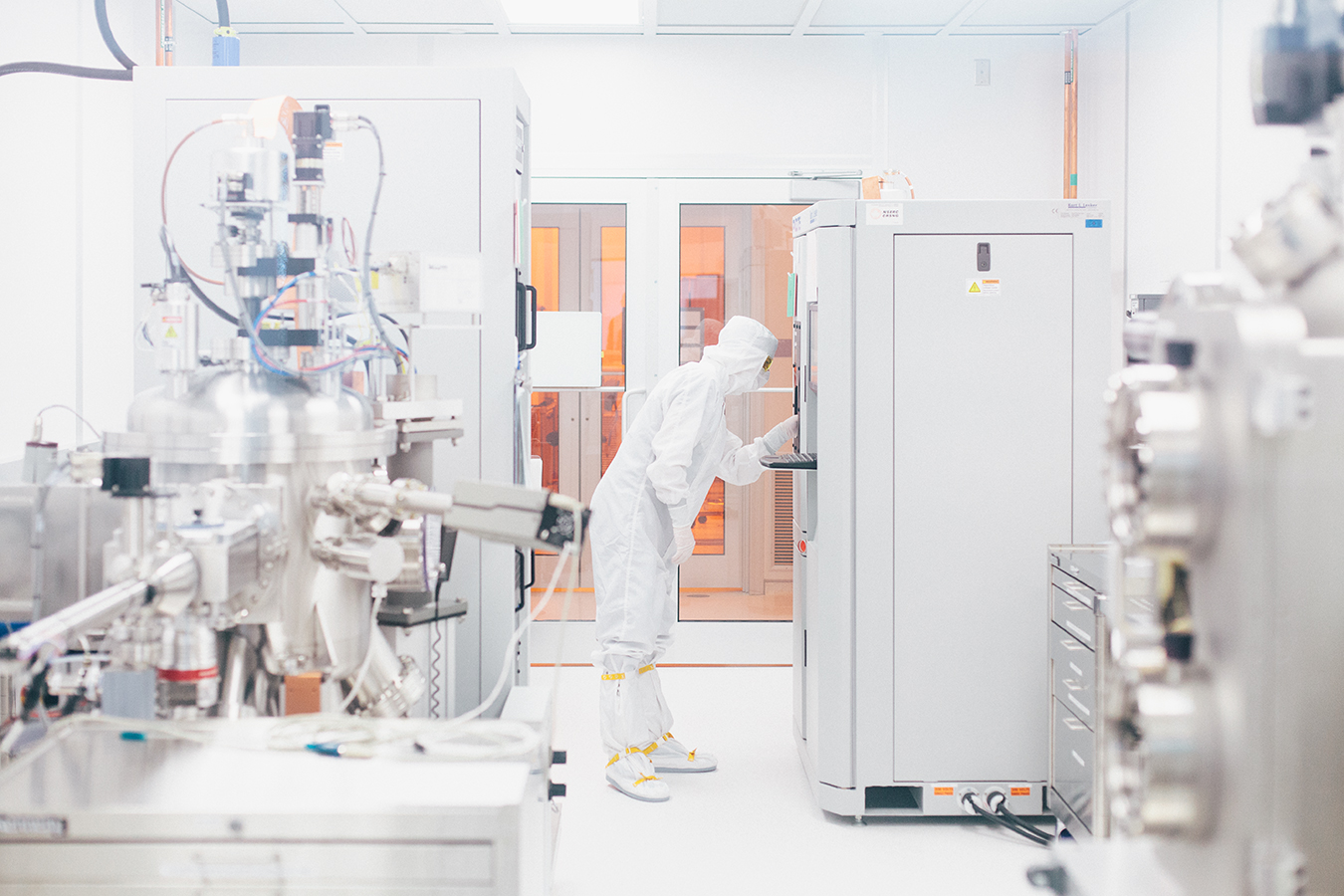 More than a decade ago, a graduate student from SFU developed the nanotechnology seed that would grow into Burnaby’s own cutting-edge firm in the global war against counterfeits. In this 2015 story from our archives, Nanotech’s then-CEO let us in on the science of security.

Doug Blakeway casually pushes a stack of cash across the table—fives, tens, twenties; there’s a fifty buried somewhere near the bottom. Faces of prime ministers and presidents stare back, the leaders of states both real and fantastic, all of them immortalized in a sea of blue, purple, and green notes. Look a little closer, however, and you can see something else. Take the bills in your hand. Bend them to and fro in the brilliant white light. There are shapes and forms, pictures and patterns, in the corners, ghosted into the background, sprinkled within the fabric of the bill.

The light show is all part of Blakeway’s typical sales pitch. As the CEO of Burnaby-based Nanotech Security Corp., Blakeway has gone through his stack of cash dozens, perhaps hundreds of times, showing off his company’s unique way of making money a lot harder to counterfeit. Along the way, he’s acquired an approach that combines equal parts Bay Street banker and Silicon Valley techpreneur: professional yet confident, calm yet self-assured, polite yet utterly convinced that his company will one day transform the world. “We sell solutions that help countries and companies solve the problem of identity,” Blakeway says. “Whether it’s to identify the bill that’s correct, whether it’s a driver’s license, passport, secure document, military card—any of those things.” 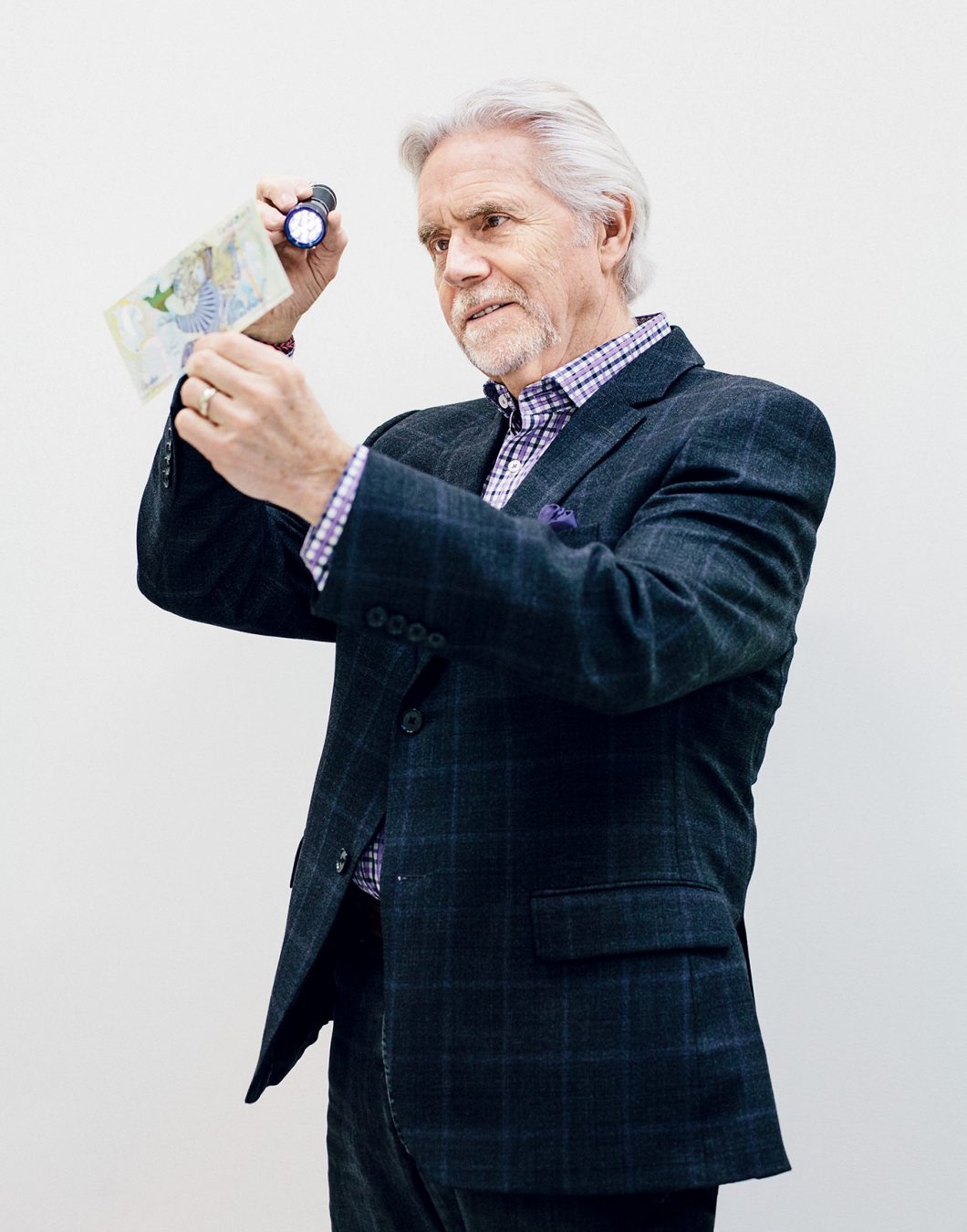 Doug Blakeway inspecting the security features on a banknote prototype.

On a conceptual level, Nanotech’s product is easy enough to understand. The company uses focused ion beams to produce a series of tiny nano-holes into a master silica wafer, which is then used to emboss the nano-holes onto a given material—metal, paper, glass, wood, plastic, fabric, whatever—without burning it up in the process. By carefully controlling the patterns of the embossed holes, the company can control exactly which wavelengths of light the eye perceives.

“Amplify would be the wrong word,” Blakeway explains. “But that’s how everybody would understand it. We gather all the waves that are sitting in the light spectrum from 300 up to 700 nanometers. Then we display only a specific wave length (colour) from all those waves. The only thing the viewer sees is a bright LED-like single colour image—the rest of the light is not seen. We can also produce them in the infrared or UV spectrums, and right down to the radio spectrum.”

The scale of it is a little difficult to fathom. Each hole in Nanotech’s matrices has a low aspect ratio of 2:1, which is a height of two and a width of one, and each hole in the matrix is smaller than a wavelength of light. For those keeping score, that’s about half the diameter of a DNA helix. Or, to make it a little more relatable: you can fit more than 500 million of Nanotech’s tiny nano holes on the nail of your little finger.

Pull your eyes back, however, and things start to get a little less mind-boggling. The result of these nano-holes is a crisp, vibrant image of any colour, or of multiple colours, or of shifting colour, or of colour that only appears in certain types of light, or colour that’s ghosted or posterized, or any combination of the above. “We create an illusion,” Blakeway says. “And the illusion—you see it and you wonder what it is and you get closer and you can verify or authenticate.” 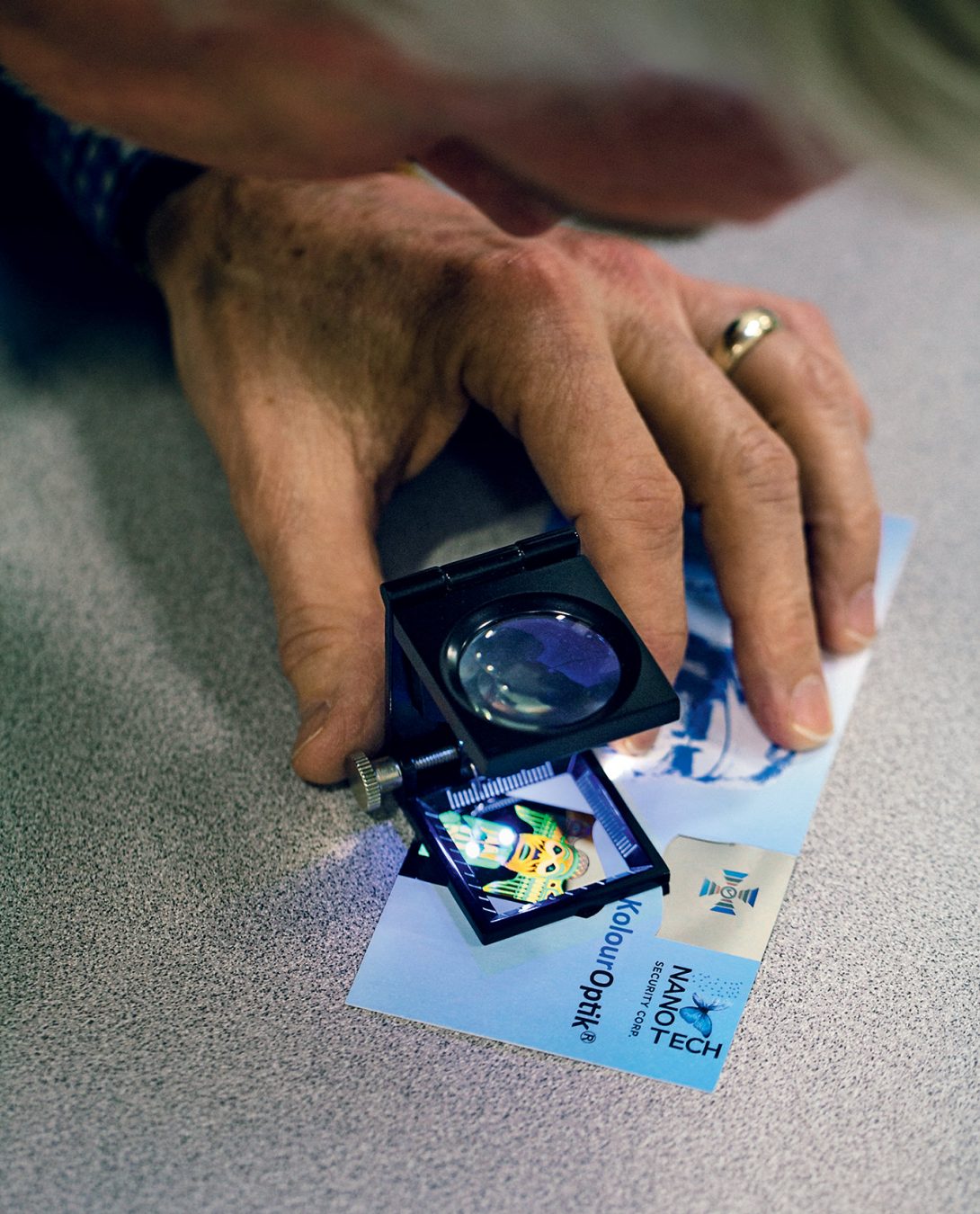 Inspecting the micro-images hidden in the eyes of the KolourOptik totem image.

In the war against forgery, this may well be the nuclear option: a technology that provides pretty much anybody with a method of quickly determining whether something is real or fake, but requires specialized equipment, ultra-clean production facilities, and advanced computer programming to produce, thereby making it darn near impossible for counterfeiters to stay in business.

“We gather all the waves that are sitting in the light spectrum … Then we display only a specific wave length (colour) … The only thing the viewer sees is a bright LED-like single colour image—the rest of the light is not seen.”

Not that Blakeway believes in such absolutes. “Never say impossible,” he says with a good-natured smile. “With enough time and money, you can reverse engineer anything.” Fair enough. Even so, given the investment required, it’s unlikely that Joe the counterfeiter will be copying anything graced with Nanotech’s nano-sized stamp of approval anytime soon.

Nanotech is one of those rare species in Canada: a technology success story that’s also a business success story. The company got its start back in 2009 as the child of a marriage between a “pure research” facility and the fast-paced world of high-tech. “I was entrepreneur in residence—still am—at Simon Fraser University’s Venture Connection,” Blakeway says. “As such, a lot of projects are brought to me for a ‘tune up’ before they’re commercialized. So I look at them and I give feedback.” One of those projects was an innovation by Dr. Bozena Kaminska and Clint Landrock, two scientists from the university’s renowned nanotechnology lab. The two created the first nano-hole arrays back in 2008, and while they quickly recognized the commercial potential of their technology, they lacked the business know-how to get it off the ground. So they called up someone who did.

“They knew my background, and they targeted me to be an investor in it,” Blakeway says. “I was really there to give them advice on setting it up, and in essence they were coming after me to become an investor in the company and do something.” 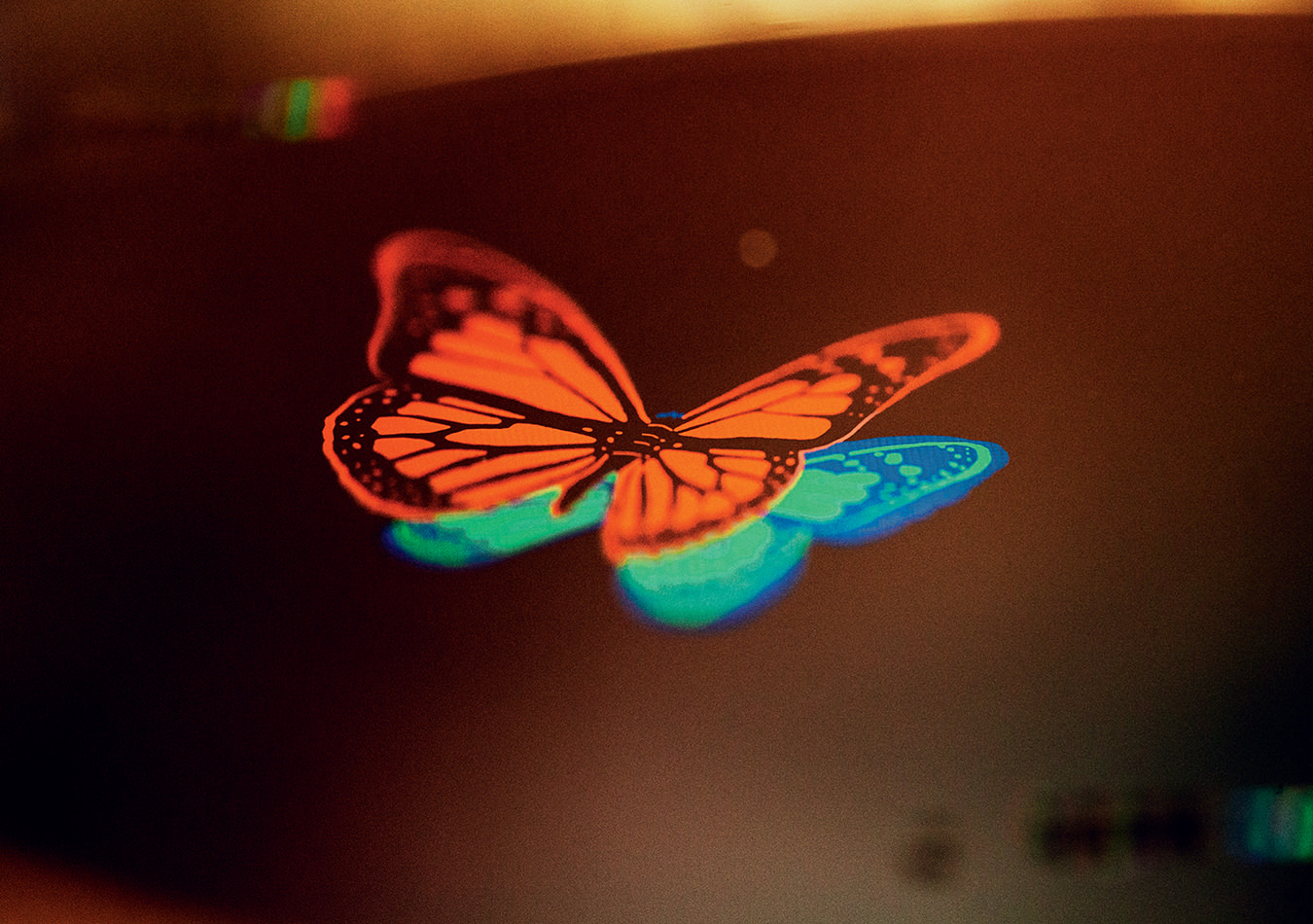 Light reflection off the image creates orange-black wings while the light in transmission shown through the wings casts a blue-green image on a surface.

And that’s exactly what he did. Blakeway was so impressed with Kaminska’s and Landrock’s invention that he entered into talks to buy the technology outright from SFU, in exchange for a large upfront payment and an ongoing licensing fee. He then struck an agreement to make the inventors major shareholders in the company. Since then, the company has spent millions researching and developing its technology. Blakeway says this is part of a long-term commitment to the science of nanotechnology, not just the business. “That thought process is something that’s ongoing,” he says. “That’s what you get by having young, bright-minded PhDs and scientists working on a project. You don’t restrict them with limitations.”

Nanotech’s first target: the multi-billion dollar banknote industry—about as obvious a customer as a security firm could ever hope for. “Central banks want something that’s exclusive, that’s very secure, that’s not out there and everybody has access to,” he says. “And they’re going to want something in the future that’s specific to them that you will not be allowed to sell to others.” Even better, banknotes are an industry in which opportunity is written with big numbers. “There are 160 billion banknotes produced per year,” Blakeway points out. “China does somewhere in between 40 to 50 billion by themselves in a year. India is second, at about 30 billion. Canada does about 800 to 900 million. That’s what they produce every year.”

But as Blakeway explains, building a better banknote is a bit like building a better mousetrap: not everyone wants to toss the old one on the trash heap until they’re sure the new one works. “It’s very hard to break into that community—it’s a club,” he says. “All the issuing authorities are very specific about who gets in. You have to have the contacts. You have to make the product. They tell you: ‘When we see, we’ll know.’ ”

“If you want to know the difference if it’s authentic or not, you will have a logo that ‘turns’ on and off—and you can see it across the table, the room, or even across the street.”

Such caution has forced Nanotech to use the back door when it comes to selling its security products. That’s a big part of why the company recently acquired Fortress Optical Features; the Québec-based company already designs and sells security technology such as Optical Thin Film to bank note–issuing authorities. By ganging up new technology with old, Nanotech can position itself as a known entity selling a suite of security options, rather than an up-and-comer selling something unproven. “When we layer our technology on top we can go to an issuing authority and say, you don’t have to redesign your currency—we can put it in today. That’s the big difference.” 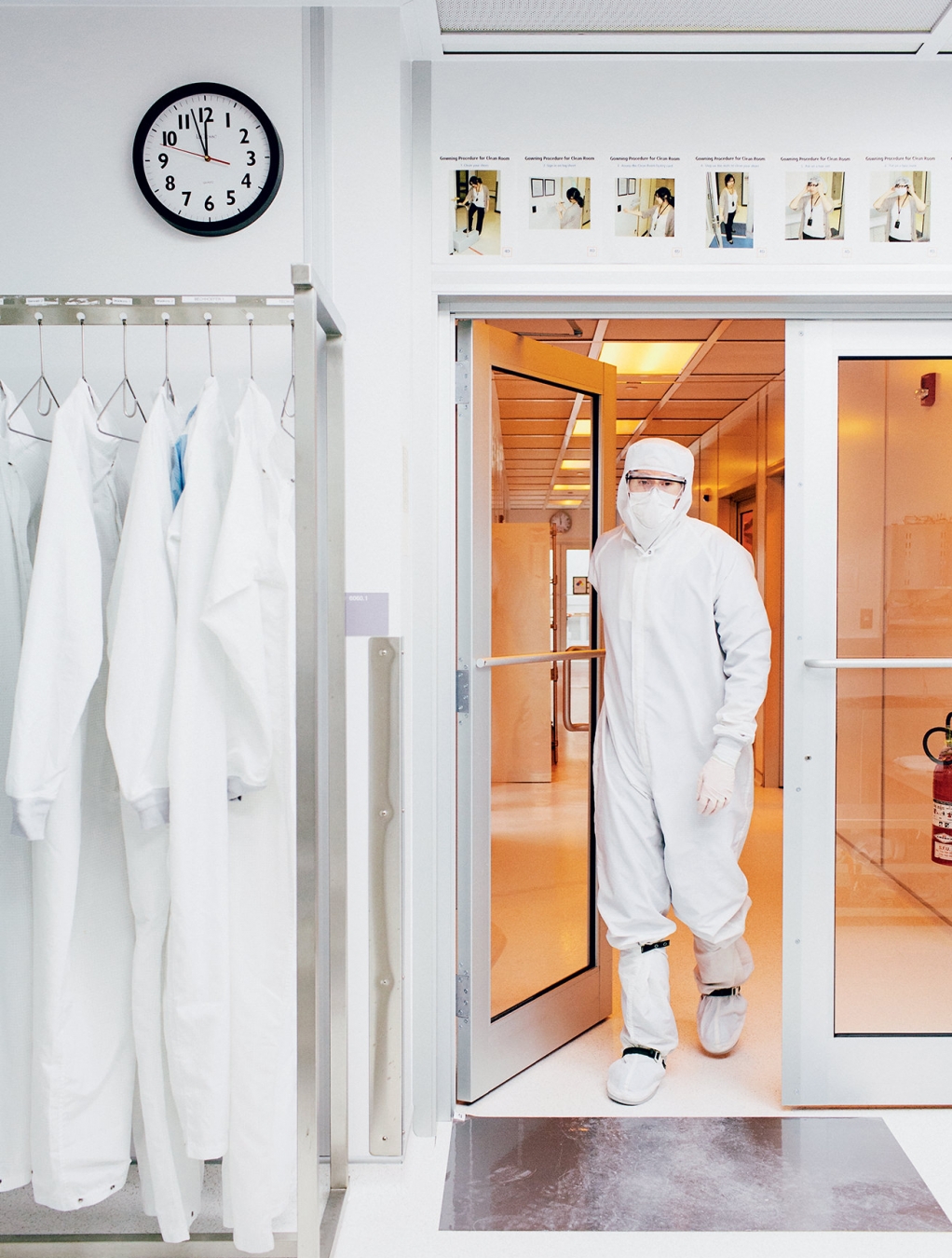 A Nanotech scientist walking out of the Class 100 clean room at 4D Labs—Class 100 means that only 100 particles per cubic metre are measured in the air.

The sales pitch seems to be working. The company has secured contracts with a number of issuing authorities in both the developed and developing world. Of course, Blakeway can’t discuss which ones—the countries in question would rather not tip their hands to the forgers and the counterfeiters. All the better to surprise them.

Of course, banknotes aren’t the only fish in the sea for Nanotech. The company is also actively pursuing a number of different opportunities to introduce its security technology to other industries. Because the technology can be applied to almost any surface, the possible applications are nearly endless. As an example, Blakeway cites another industry fighting an ongoing battle with fakes and knockoffs: designer luxury goods.

“We can embed this into something like a clasp or the outside of a Louis Vuitton purse or clutch bag,” Blakeway says. “If you want to know the difference if it’s authentic or not, you will have a logo that ‘turns’ on and off—and you can see it across the table, the room, or even across the street.”

Of course, there’s nothing that says such an application need be practical. An avant-garde label might make use of such a feature to add a unique visual punch to a specific portion of a designer piece, for example. “We can make the dress change one colour to another specific colour,” Blakeway suggests. “You can use it in a design. It’s very beautiful.” 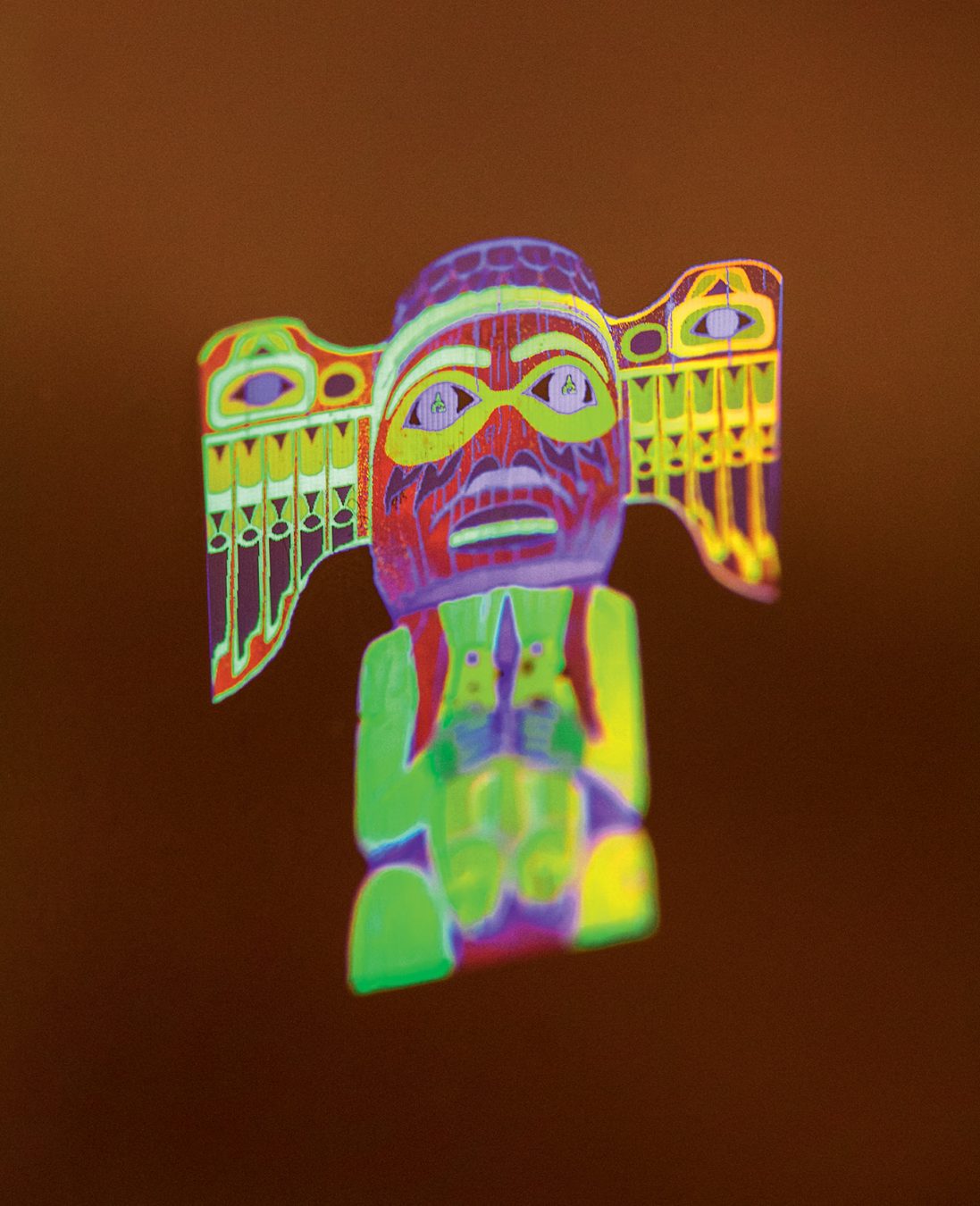 As Blakeway explains, the unique pattern of embossed nano-holes can also be used as a data storage centre. “Because you’re doing all the hole patterning and you’re using light, we’re not as constrained by the amount of data as present day technologies,” he says. In practical terms, all it takes is an optical reader— a cellphone camera, for example, or a standalone device similar to a Blu-ray player—to read the distinct pattern of the light and translate back into user-recognizable data. And that’s the last you’ll ever see of RFID tags, mag stripes, QR codes, and similar technologies.

While such things of these remain on the company’s to-do list, in the here-and-now, Blakeway remains firmly focused on seizing the low hanging fruit: creating the world’s most secure currency. So far, so good on that score. On the research front, the company was recently granted two U.S. patents for its banknote-related security technology. Meanwhile the sales team recently landed a $1-million contract with an issuing authority of a major foreign government to develop a unique security feature for various denominations of banknotes.

And the exit strategy? Blakeway admits there isn’t one. He and his shareholders are in this game to build up, not cash out. “I’m happy all the time with it,” he says. “It’s a fun job—one that’s not really a job. It’s not going to work every day, it’s out there doing something.” There’s a smile on his face when Blakeway says the words. And you don’t even have to look a little closer to see it.

This story from our archives was originally published in our Spring 2015 issue. Read more stories on local Business.