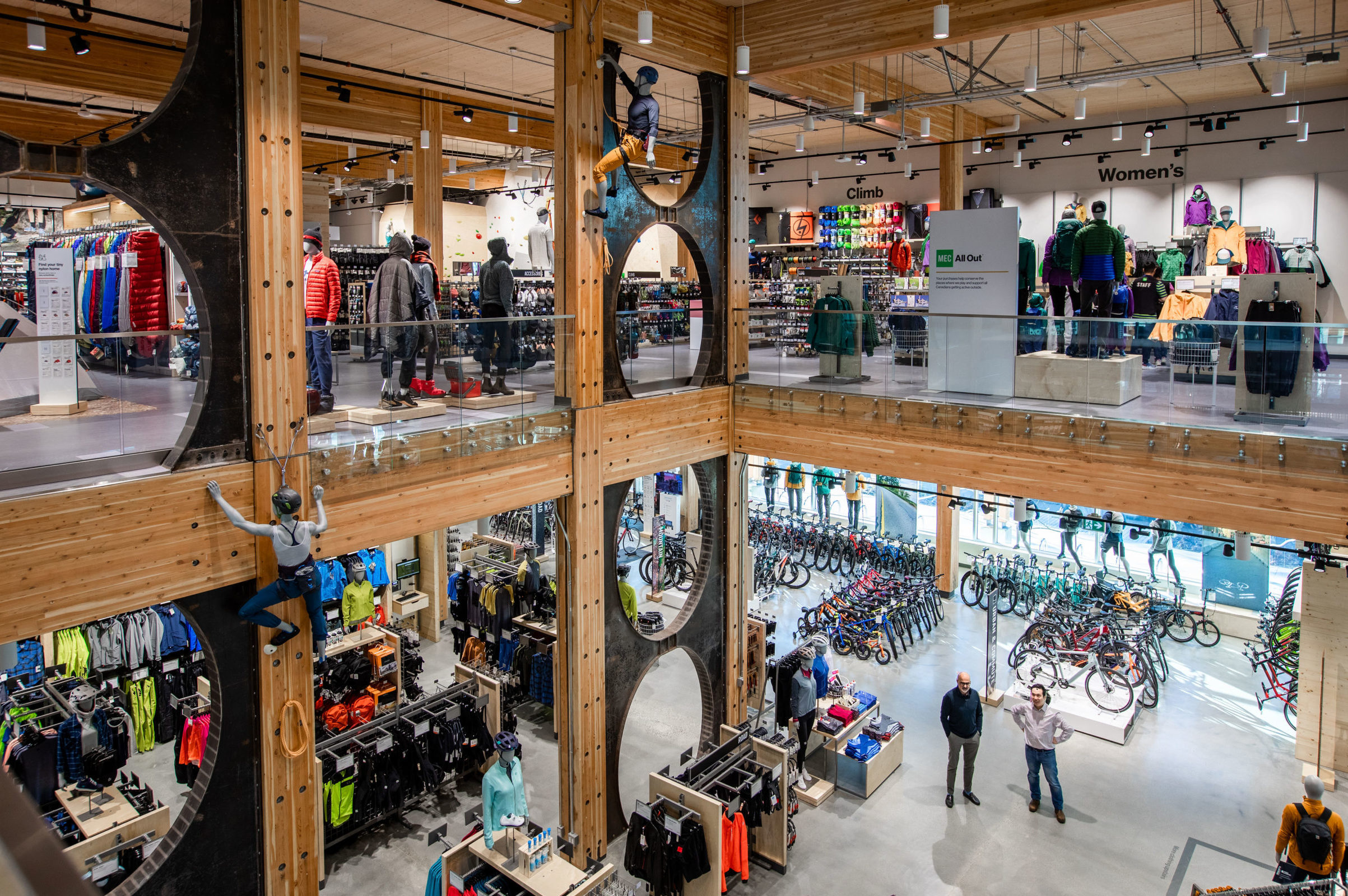 With its soaring ceilings and 33,000 square feet of bright, open-concept retail space, Mountain Equipment Co-op’s new flagship store has come a long way since its humble beginnings in a VW van 49 years ago.

That the van now sits comfortably, permanently parked in a place of honour inside the vast new East 2nd Avenue space only reinforces the co-op’s rise to prominence in its hometown. 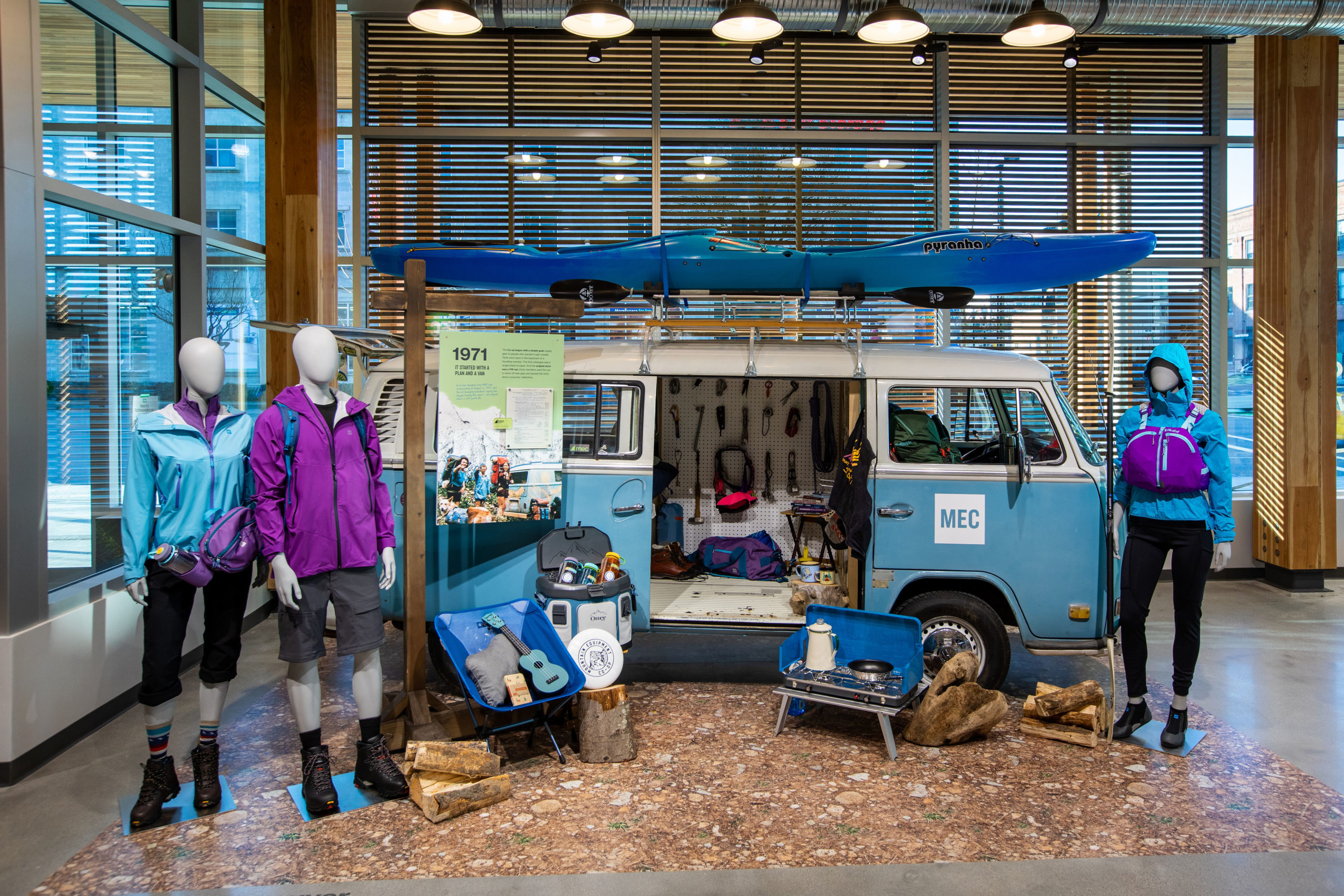 From the van’s six founding members, who also operated out of room 14C of the Student Union Building at the University of British Columbia, MEC now boasts five million members across Canada and considerably more gear than its original one-sheet catalogue.

Not surprisingly, the new building gives more than a passing nod to sustainability; in fact, its mass timber superstructure stores carbon—roughly the equivalent of taking 90 cars off the road each year. (The exposed pine beams also give the store’s well-equipped, lifelike mannequins something to convincingly scale.) 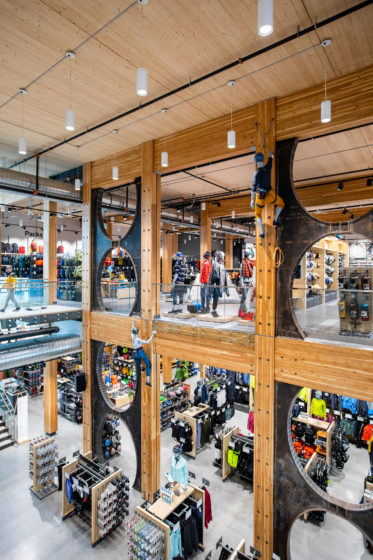 The roof captures rainwater to recycle, supplying up to 80 per cent of the water needed to flush the toilets, while the store is connected to the Southeast False Creek community’s Neighbourhood Energy Utility. The NEU turns waste heat from sewage into heat and hot water for nearby buildings so they can rely on renewable energy rather than fossil fuels.

It’s also one of only two buildings in British Columbia whose water management system is certified Salmon-Safe; the first being MEC’s head office on Great Northern Way.

Signage sprinkled throughout the store commemorates early milestones such as the foot tracings remote members were encouraged to mail in to ensure their new hiking boots would fit, as well as the original Squamish name—Two Sisters—given to the local twin peaks now commonly known as the Lions. An Indigenous land acknowledgement greets members as they enter. 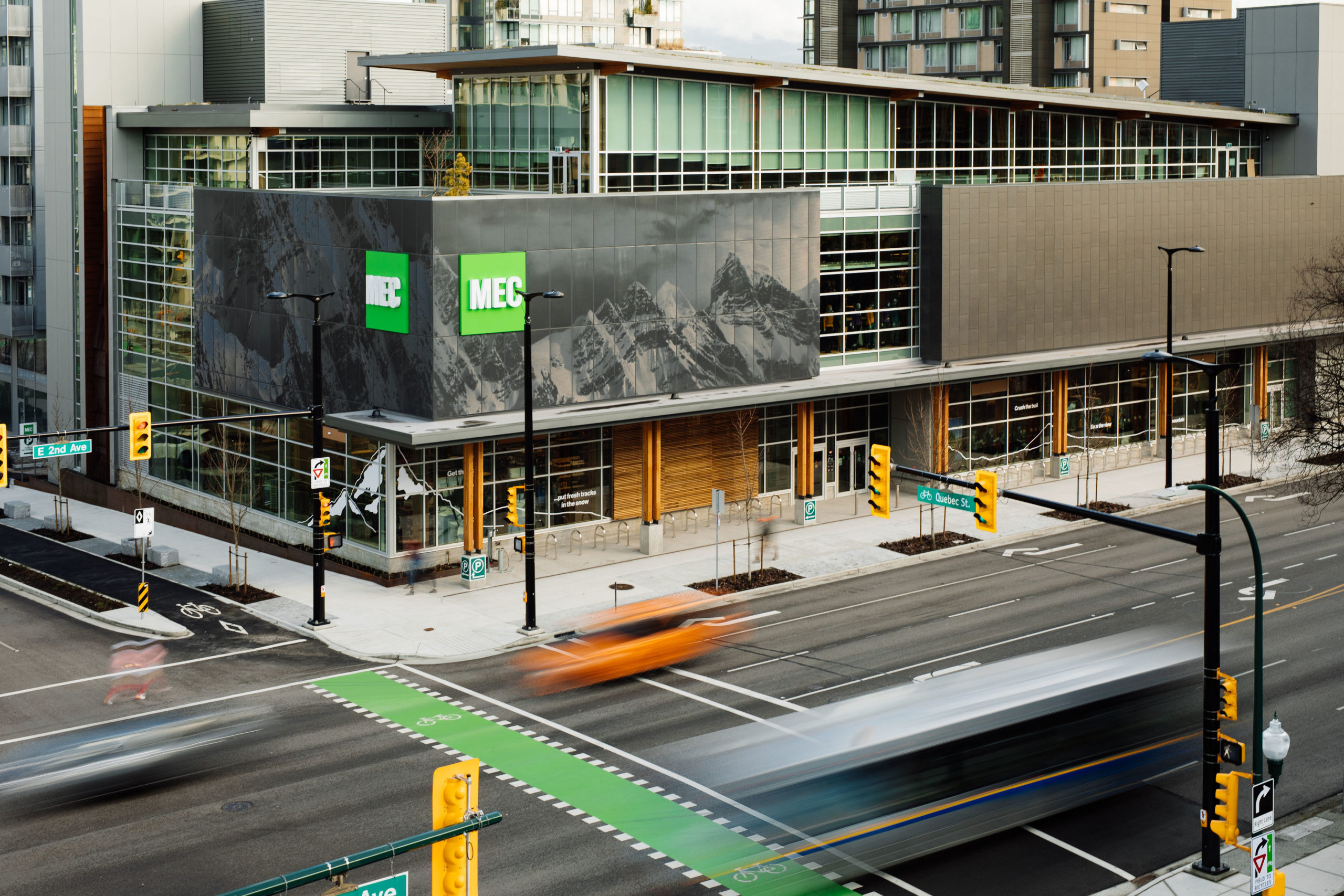 With 5,000 more retail square feet than the 25-year-old Broadway store it replaces, the new space is large enough to accommodate a full-service ski and bike shop; a Basecamp section described as “an open-concept community hub” where members can connect, learn, and share resources; a bouldering wall (temporarily closed as a precautionary measure to reduce the spread of COVID-19); and a MEC Studio to showcase the company’s own design label. Among this season’s new colours: Blue Grotto and the bold orange rust of Masala, says MEC colour designer Daniel Finlan, who is sporting a fleece pullover in Pistachio Heather when I meet him.

Everything in MEC’s line is fully tested for functionality then aesthetically refined in Vancouver to celebrate Canadian outdoor styles, Finlan says, ensuring every stitch is both beautifully designed and environmentally sound.

His colleague, MEC’s manager of product concepts, Mark Knight, is particularly proud of another new feature added to this year’s in-house backpack line: the latest in lightweight Recco reflectors have now been integrated into every MEC pack to help locate lost hikers, especially locally on the North Shore mountains. A trial run in November saw a helicopter team find a planted “lost” hiker on Cypress in six minutes flat, Knight says.

The new flagship store is now open to the public and will celebrate its grand opening weekend April 4-5.