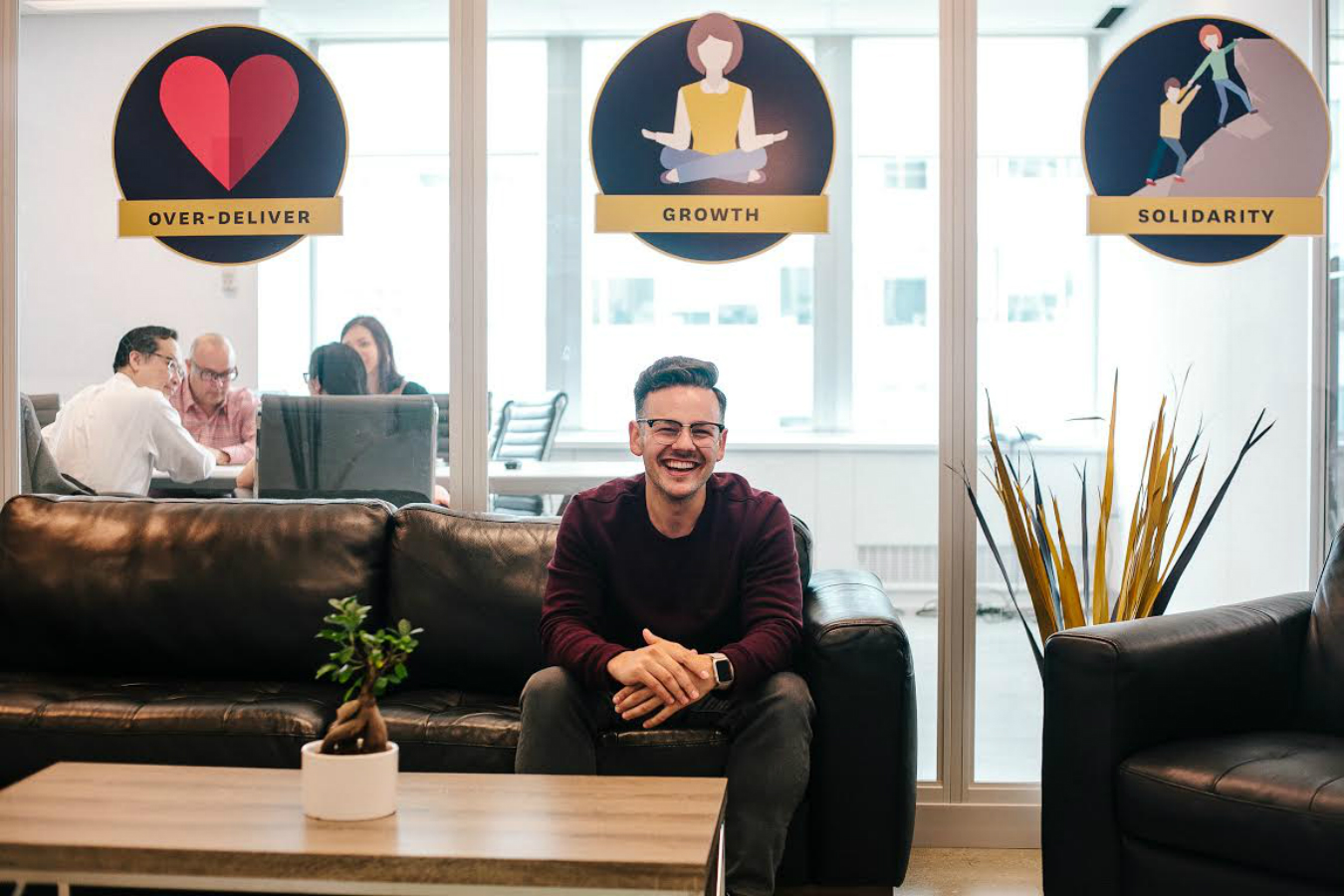 On a warm, spring day, seaplanes can be seen taking off and landing a short distance away from Rise’s Vancouver headquarters. The 60-person technology startup moved into its Coal Harbour office in October 2015, and the location is a far cry from the early stages of the company. Founded in 2011, the software enterprise started out with a tiny team of three. “Back then it was just me, my brother, Tim, and my dad, Faiz,” recalls Wisam Abdulla, Rise’s CEO and co-founder. “We had three desks in the corridor in an office in Gastown.” Then, over a period of almost five years, the company grew. First, it took over that entire Gastown office, then grew into an office next door, and, finally, made the move to Coal Harbour.

Location isn’t the only thing that has changed. The company was originally founded as Paysavvy, focusing on payroll technology for businesses. However, after years of speaking with workplace teams and managers, Abdulla realized there was a shift in the human resources field: the rise of company culture. “The biggest thing we’ve seen since we started the company is the importance of people and culture within an organization,” Abdulla says. “We have bigger ambitions beyond payroll, and Rise is the transition to that expanded vision.” The rebrand to Rise came very recently, in February of this year. The startup now calls itself “the world’s first people and culture platform.” But what does that mean, exactly?

For Rise, it is about helping companies spend more time on building their culture through software that connects apps and integrations in one central hub. “Every human resources professional we talk to has shared the same thing,” says Abdulla. “They want to spend less time on administration so that they can spend more time on the employee experience.” In Rise’s platform, its customers, who range from manufacturing companies to internet marketing startups, can manage payroll, time off, and benefits. There is also an option to integrate tools that they may be already using, such as applicant tracking and goal setting. These areas bring greater focus to the people and ethos of an organization.

Abdulla believes it is this focus that sets successful companies apart from the rest. “Your people should be your company’s most important competitive advantage,” he says. “The future of the workplace is about encouraging an employee to bring their ‘whole self’ to work.” He continues by stating that employees who feel good are more likely to shine at work. According to Abdulla, part of the future of the workplace is giving freedom to employees. He lists flex time, remote working, meditation spaces, and nap rooms as growing trends in the human resources field: MEC, for example, has an indoor climbing wall; Hootsuite has beanbag chairs and beer on tap. And while ping-pong tables and lunchtime yoga sessions may be temptingly eye-roll-inducing, Abdulla thinks they are the future (and that they can actually work). “These are still trends that are associated with forward-thinking companies that are on the fringes,” he says. “I don’t predict anything crazy in the next 10 years—it’s more about recognizing these innovators and early adopters and getting everyone else on board.”

For Rise itself, only half of the floor has been taken up in its Coal Harbour office. There is room, both literally and figuratively, for so much more.