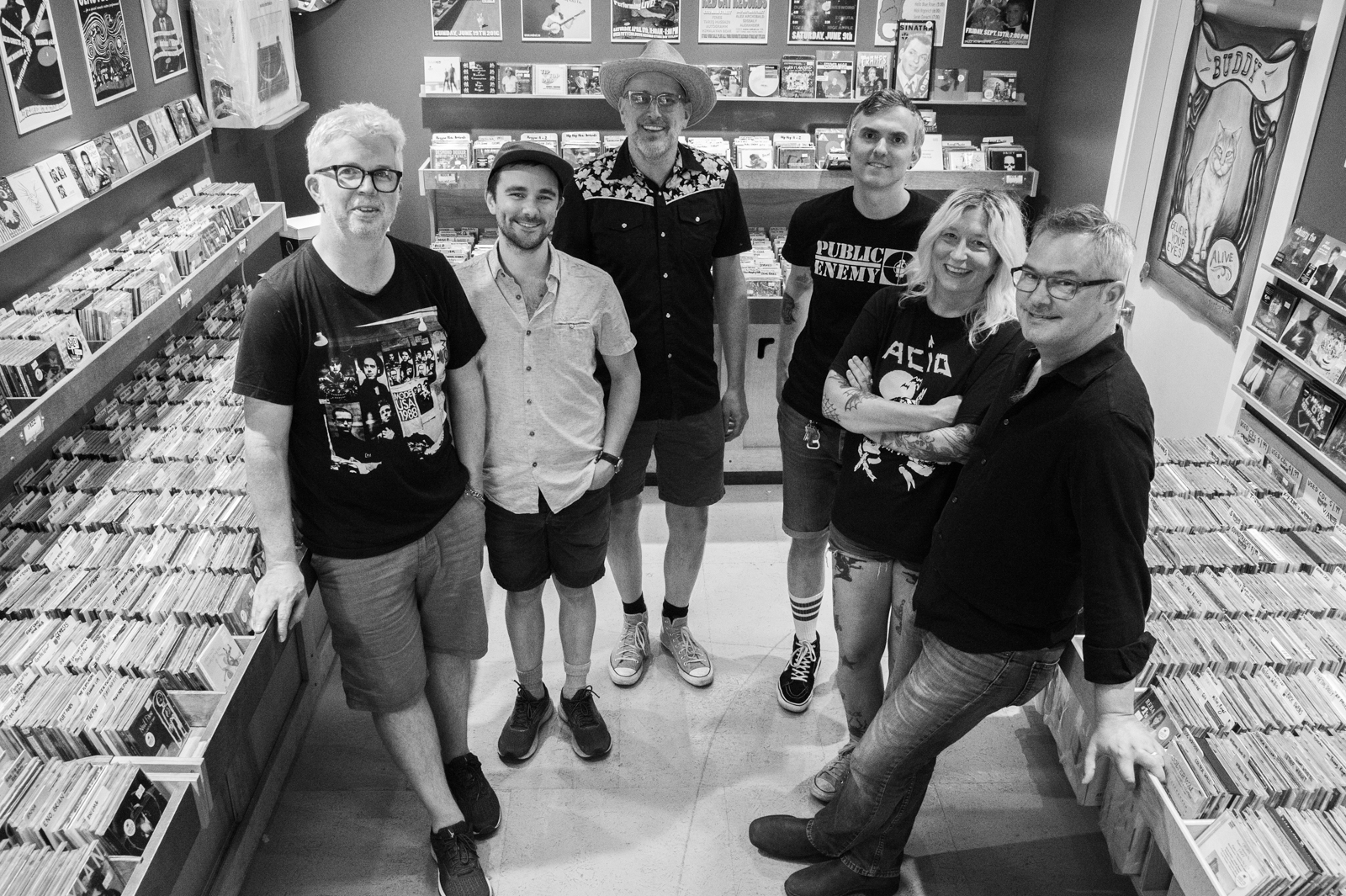 When Dave Gowans started working at Red Cat Records, the store⁠—then down the block on Main Street from where it is now⁠—was owned by a musician, Amy Honey, and her husband Andrew Pearson. Gowans’ first response when they asked him to work for them was, “Well, I’m touring a lot in the band, would you be okay with that?”

The band was The Buttless Chaps. For those new to the Chaps, their name—initially suggested as a joke by Gowans—can be a bit misleading. No cowpoke, my first reference point was the leather bar scenes in William Friedkin’s Cruising. I assumed the band would be kind of goofy and (perhaps satirically) gay; a comedic cowpunk version of Turbonegro, perhaps?

Gowans, sitting in the neatly-organized back rooms of Red Cat while John Lee Hooker plays over the sound system chuckles at how wrong I was. For one thing, chaps were legit cowboy culture years before they were queer costume. “People would always say, all chaps are buttless. When you’re riding on a horse, you can’t have leather on your butt, or you’ll fall off your saddle, so they were always like that!”

The band’s country inflections were only a part of what they did, balanced by artful abstraction (aided occasionally by local trumpeter JP Carter’s dreamlike flourishes) and a love of 80s’ New Wave. “For sure, I’m a child of the ‘80s and grew up with Echo & the Bunnymen and Depeche Mode,” Gowans says. “Those are really big influences.”

It took some time for the band to find their audience. “We used to get people telling us, ‘I really like half of what you do!’” Gowans laughs. “I remember one time opening for the Supersuckers in a really big club, and there were people throwing beer at me and people cheering; people telling me they were going to kill me and people saying it was the most fun they’d had at a show.” 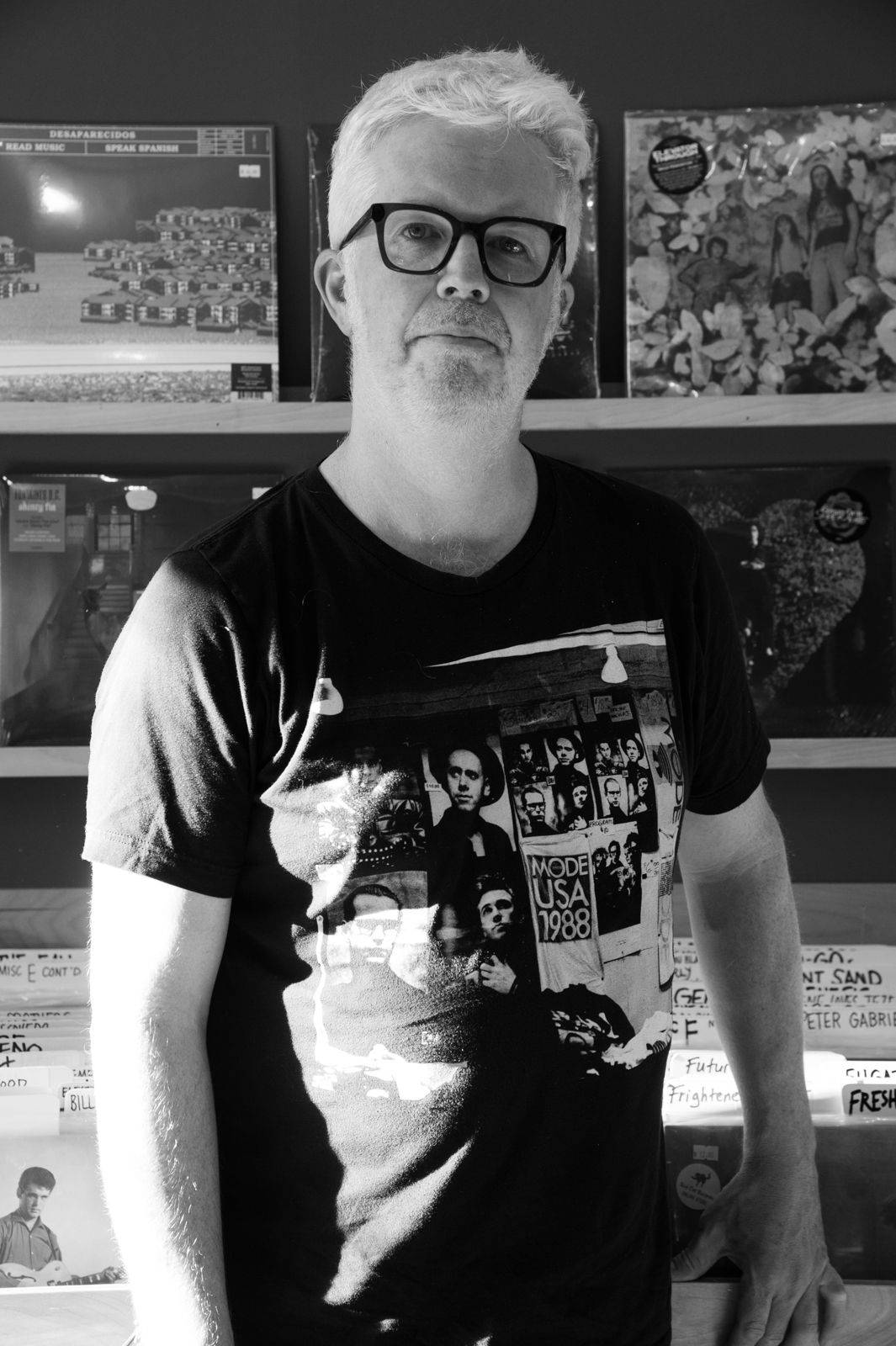 Dave Gowans, owner of Red Cat Records, was the singer and guitarist of The Buttless Chaps, a Canadian indie rock band.

Gowans, now Red Cat’s owner, isn’t the only musician around the store. As I chat with Gowans, Ford Pier is minding the till.

When Pier took the stage for a ‘tweener set between headliners at this year’s Folk Festival, MONTECRISTO editor Fiona Morrow gave a start and said to me, “Hey, I know him from Red Cat!”

I’ve had similar jolts of recognition with Pier. I’ve seen him (maybe) with DOA, and I’ve (definitely) seen him open for NoMeansNo and play with the Show Business Giants. I recall the day I first spoke to him at Red Cat, I had just seen him do a solo set before a 2008 Daniel Johnston concert at Richard’s on Richards, after which he backed the legendary bipolar Texas songwriter as part of a pick-up band (he’s on the left in that clip). Ford also goes way back with Gowans, including the odd appearance on albums by the Buttless Chaps.

Which brings us back to how Gowans came to own the store. When Honey and Pearson, who opened Red Cat in 2003, fell on some financial woes, Gowans decided they couldn’t afford to have an employee, and left for his other straight job, doing publicity and setting up distribution for Mint Records, the Buttless Chaps’ then-label. 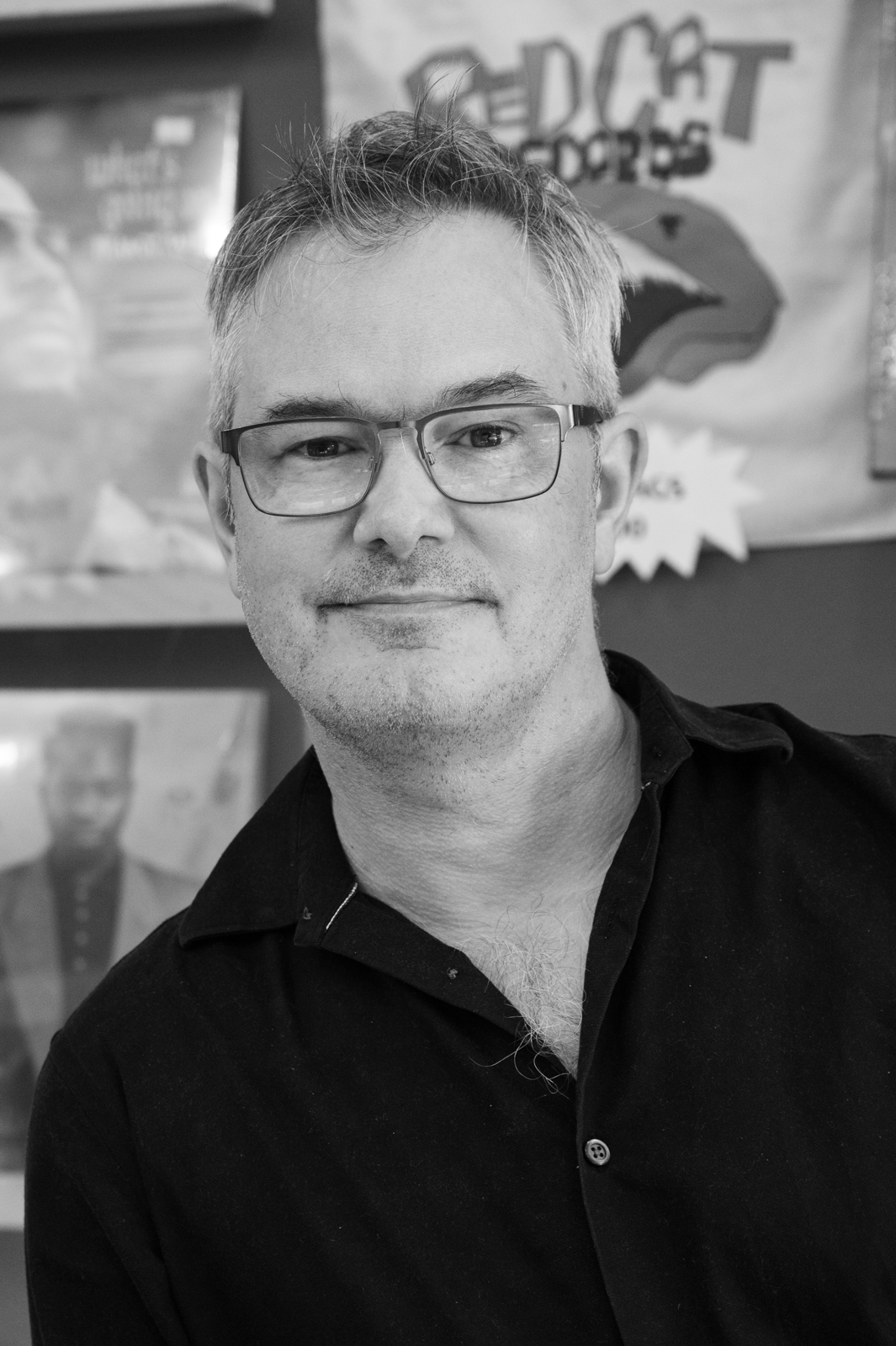 When Ford Pier was asked to join Red Cat, he said he would be touring. But so was everyone else.

“Then Andrew phoned me and said, ‘Just so you know, I think we’re going to close the store.’ I phoned him back and said, ‘Don’t close it! Maybe I can figure something out.’ I really didn’t want to see the place close, because I loved the shop.” He then phoned Lasse Lutick, the Buttless Chaps’ guitarist, who had once considered opening a record store with Gowans in the 90s.

The week Gowans and Lutick took over in March 2007, Neon Bible by Arcade Fire was released, Gowans explains. “I remember I ordered a box of CDs and made a new release wall and we kind of cleaned the store up, took some bins and clutter out, and people were really excited to get this new record. And I had ordered ten copies on vinyl, and that’s when things were changing for new vinyl? And I was like, ‘Maybe there could be some potential here…’”

As for Pier being brought onto the team, touring came up there, too. “There was one point after Lasse and I bought the store, and we were like, ‘Maybe we should get someone to run the store with us.’ And we were like, ‘How about Ford? Maybe Ford’s looking for a job.’ I think he had just moved back from Toronto. And Ford, again, was like, ‘Well, I’m going to be touring,’ And we were like, ‘That’s fine, we are too! We can probably figure it out.’”

It isn’t always straightforward. At one point, Pier and the Buttless Chaps had overlapping tours of Alberta booked, and they had to call up an old employee to fill in. But it all worked out. Avoiding touring during busy times like the run-up to Record Store Day or during the summer vacation, when people with families might want to take vacations, is part of the trick.

Gowans bought Lutick out a year ago. “He runs a tree planting company, so with all the reforestation, his job became really busy. He was getting pulled in five different directions—he spends a lot of time up north.” (The video for “Where Night Holds Light,” off the Chaps’ fourth album from 2006, was shot near Grassy Plains, “right behind Lasse’s house,” Gowans says.) 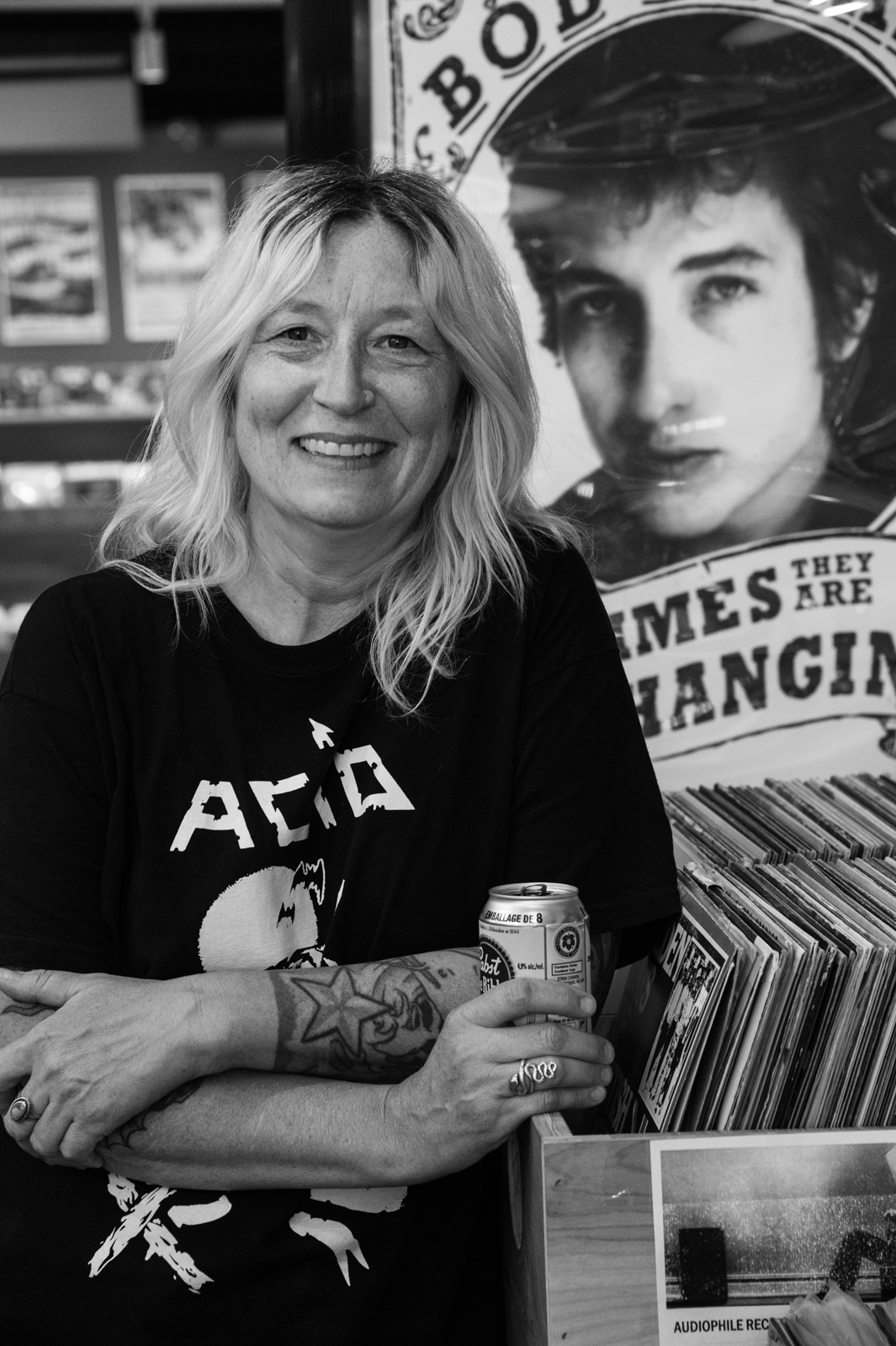 Penny Buckner, drummer for Swedish band Sandstorm and Red Cat employee, just finished a tour in Sweden in May.

It’s not just Pier and Gowans who are noted musicians, either; in fact, every employee is currently involved in bands, each with their own unique history.

Penny Buckner—sometimes “Penny Jo”—drums for the (two-thirds Swedish) metal band Sandstorm under the alias PJ “The Butcher” La Griffe. She also drums for Vancouver band Himalayan Bear, and drummed for, and for a time was married to, American singer/ songwriter Richard Buckner. Penny likes that she can easily take time off to tour⁠—that “everyone is very sympathetic to the cause” (she was gigging in Sweden just this May).

Then there’s James Stewart, who started at Red Cat last October, just before the store moved to its current location. He played guitar and sang in an Edmonton-based punk band called Slates for some ten years, as well as Edmonton’s Screaming Targets. “I’ve been working in record stores for 15 or so years,” Stewart says. “It’s allowed me to tour and record and amass a cumbersome record collection, so I hope I never have to move again!” He’s working on a project with fellow Red Cat employee Luke Nixon and the Uptights’ Jason Stevenson; the band is yet unnamed, but Nixon promises “loud rock and roll.” 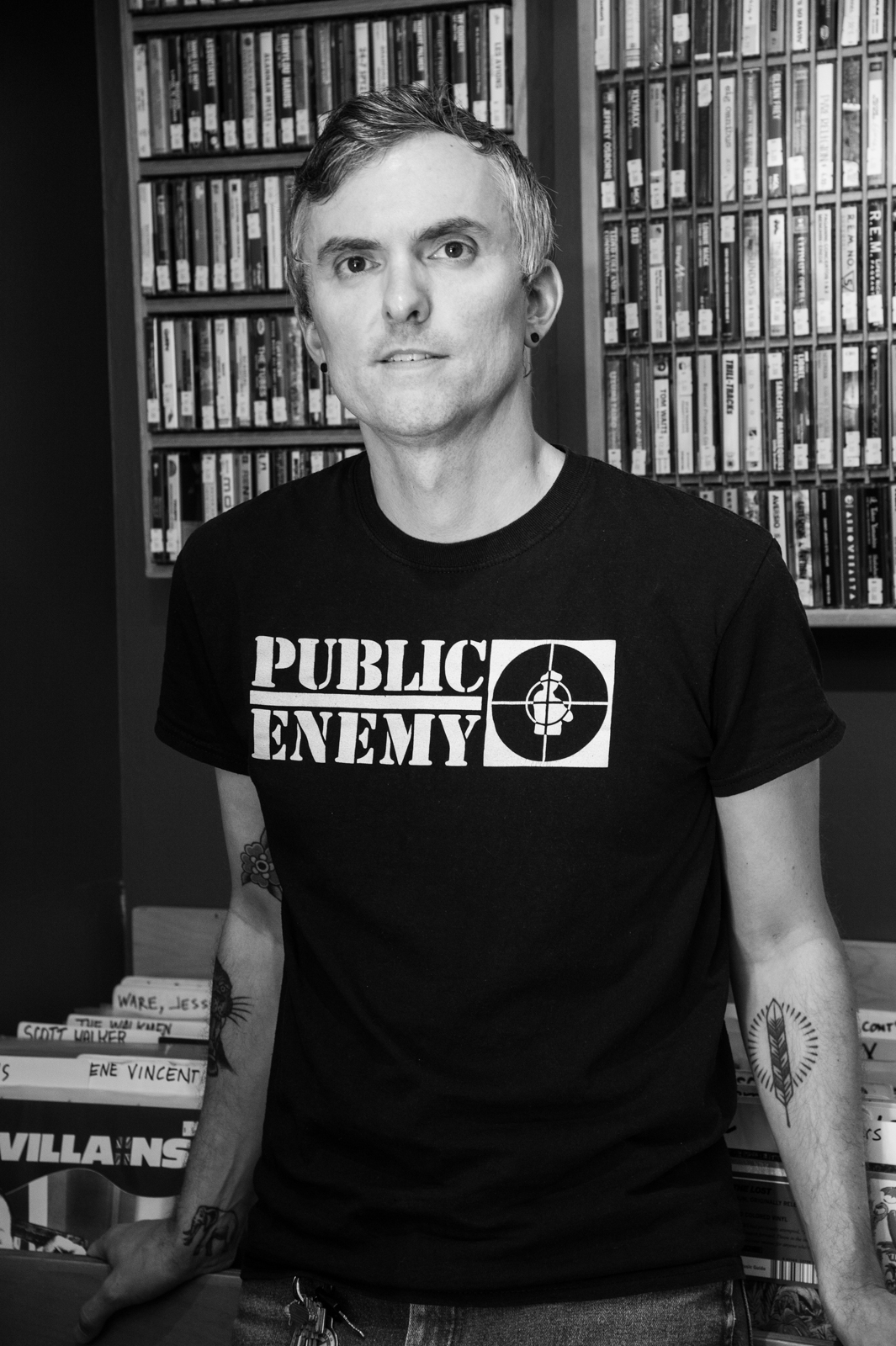 Nixon’s own history includes drumming for rock, funk, jazz and rhythm and blues bands based in Nanaimo, spending a year touring the US with a high energy bluegrass/ Celtic/folk rock band called the Clumsy Lovers, and drumming for Vancouver’s Apollo Ghosts. He too has toured far afield during his time at Red Cat, even traveling to China in 2017 with children’s entertainer Will Stroet.

In addition to supporting his employee’s commitment to their own music, Nixon says that Gowans “is a wonderful guy to work for, and when I started working here seven years ago, it was clear to me that the store fostered an environment that encouraged kindness, unpretentiousness, and respect.” 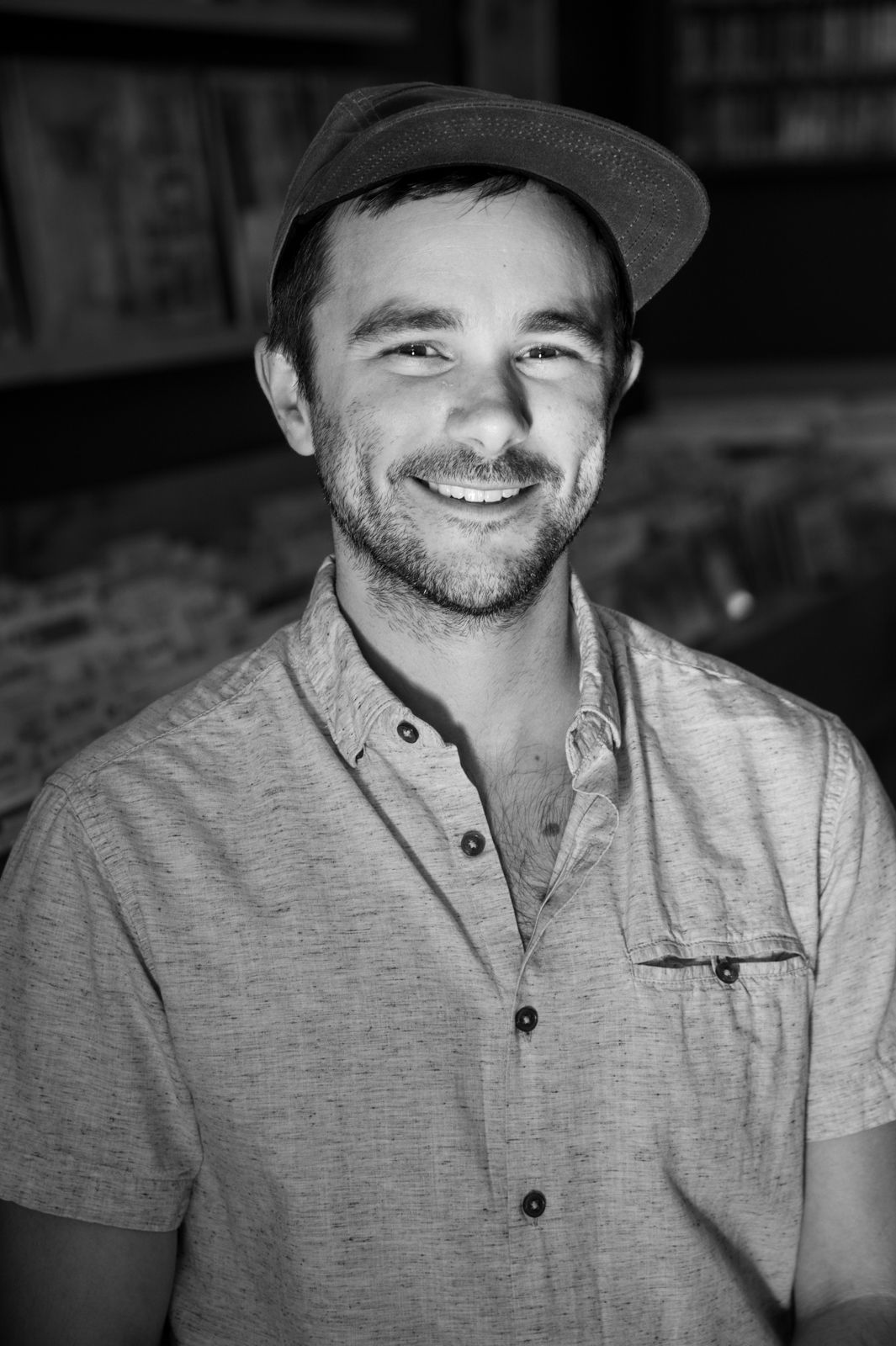 Luke Nixon, a rock, funk, jazz and blues drummer from Nanaimo, squeezed in a tour in China while working for Red Cat.

Nixon’s words are echoed by “the Sunday guy,” Nen Jelicic, on and off with Red Cat since 2008 and with the bands Lil’ Eldorado and more recently Provinces to his name. Jelicic was attracted to the store’s self-description as “run by musicians,” but he thinks the positive work environment is as much down to “what Dave, and previously Lasse, put out there themselves. They are wonderful people. They listen with open hearts.” ⁠

As for Ford Pier, he appreciates the flexibility of the work schedule⁠—he’s taken as long as five weeks off for tours, going as far afield as Germany⁠—and values the convivial work environment and staff discount. But he doesn’t think it’s that unusual to have “an above average complement of local performers” at a record store.

“Wasn’t it Sam’s in the late ’90’s that was crewed entirely by The Black Halos or something? Before that, between Track and Scratch, all of Superconductor were gainfully employed, and there were like fifteen people in that band … many record stores of renown are storied for harbouring local performers who are otherwise unqualified for the adult workforce.”

Ironically, the only person at Red Cat without a current musical project is Dave Gowans—though he did have another band after the Buttless Chaps called it quits, Cloudsplitter, named after a Russell Banks novel. When one of his two children, Olivia, was born, he started writing “quieter songs” to not disturb her sleep.

“Stephen Lyons of Fond of Tigers was always pushing me to play more subdued songs, without the bashing away on guitar that the Chaps did, then he and I started working on songs together. It’s a very quiet album, but I was very proud of that record.”

But that was over ten years ago. Does he have anything else in the works? “I think I’ll probably play again,” Gowans says. “I think I just have to carve out time for it. It might take longer than for most people!”