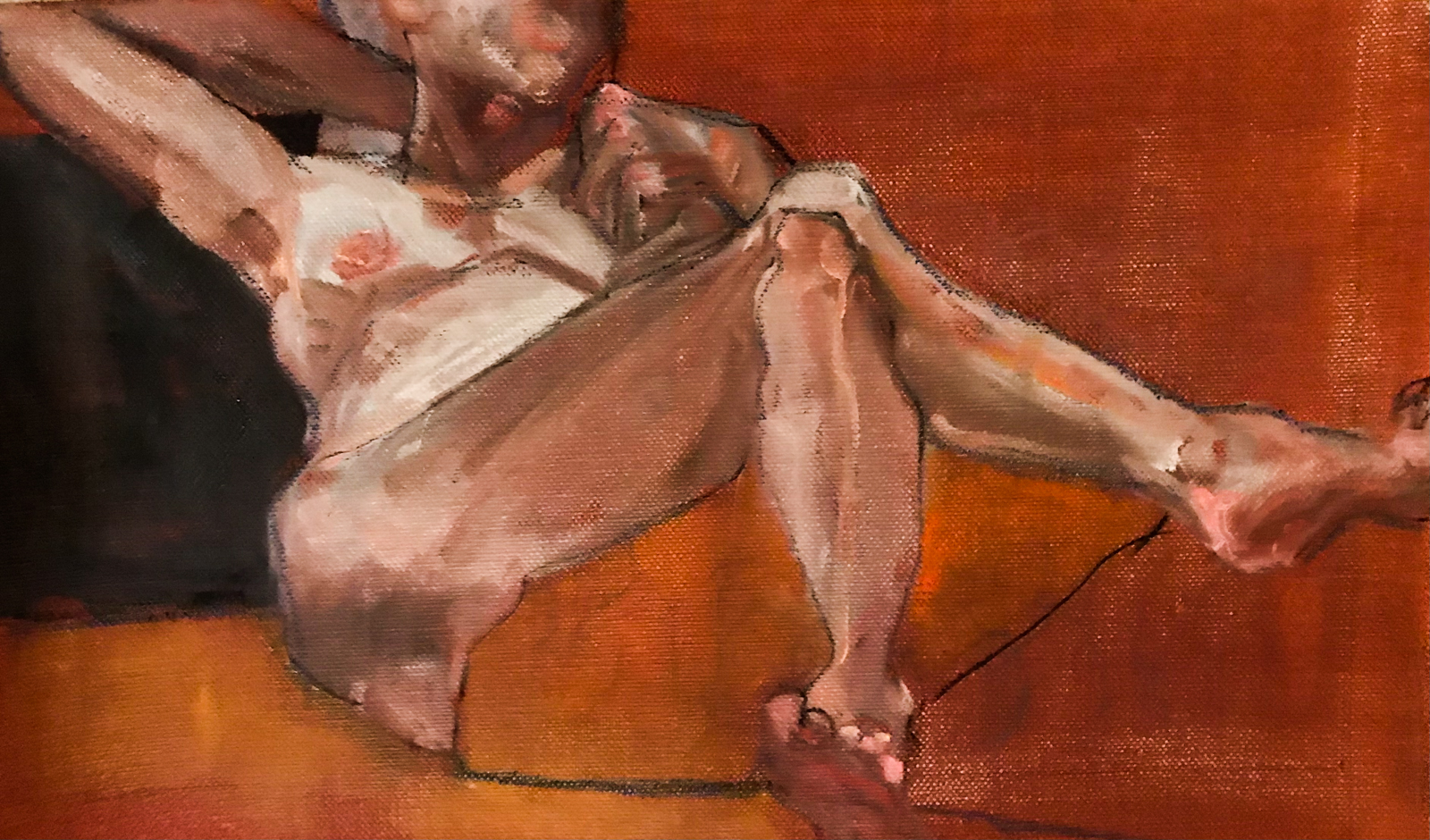 Twenty artists encircle a raised platform inside a spare, windowless studio on Vancouver’s East Side. Some are seated astride drawing benches, a few at easels. All hold an artist’s tool—charcoal, Conté stick, pencil—ready to mark the paper. A 40-something male model enters the room as the session manager announces the sequence of timed poses. The model steps onto the platform, disrobes under bright ceiling lights, and strikes a boxer’s stance. Quickly the artists⁠—some inexperienced, some seasoned⁠—begin drawing his naked form. A timer goes off and the model moves into another pose.

And so it goes for the three-hour session at Basic Inquiry.

Ezra Larsen has been honing his artistic skills at the studio since graduating high school a decade ago. A professional artist, he’s volunteered as session manager and, six years ago, began working as a model. That makes him a triple threat around the studio.

“There was one session when the model didn’t show up,” Larsen remembers. “The session manager said, ‘Does anyone want to model?’” Larsen decided to give it a try—at Basic Inquiry and other studios around the city. “I quickly realized there was a shortage of young male models, purely because of age and gender. Many do it later in life. They are insecure when they’re young.”

Modelling has informed Larsen’s work as an artist. “I like the idea of the model actively collaborating with artists. You are feeling your energy go out there. I know what it’s like as an artist—moving the body in cool poses and being interesting.” 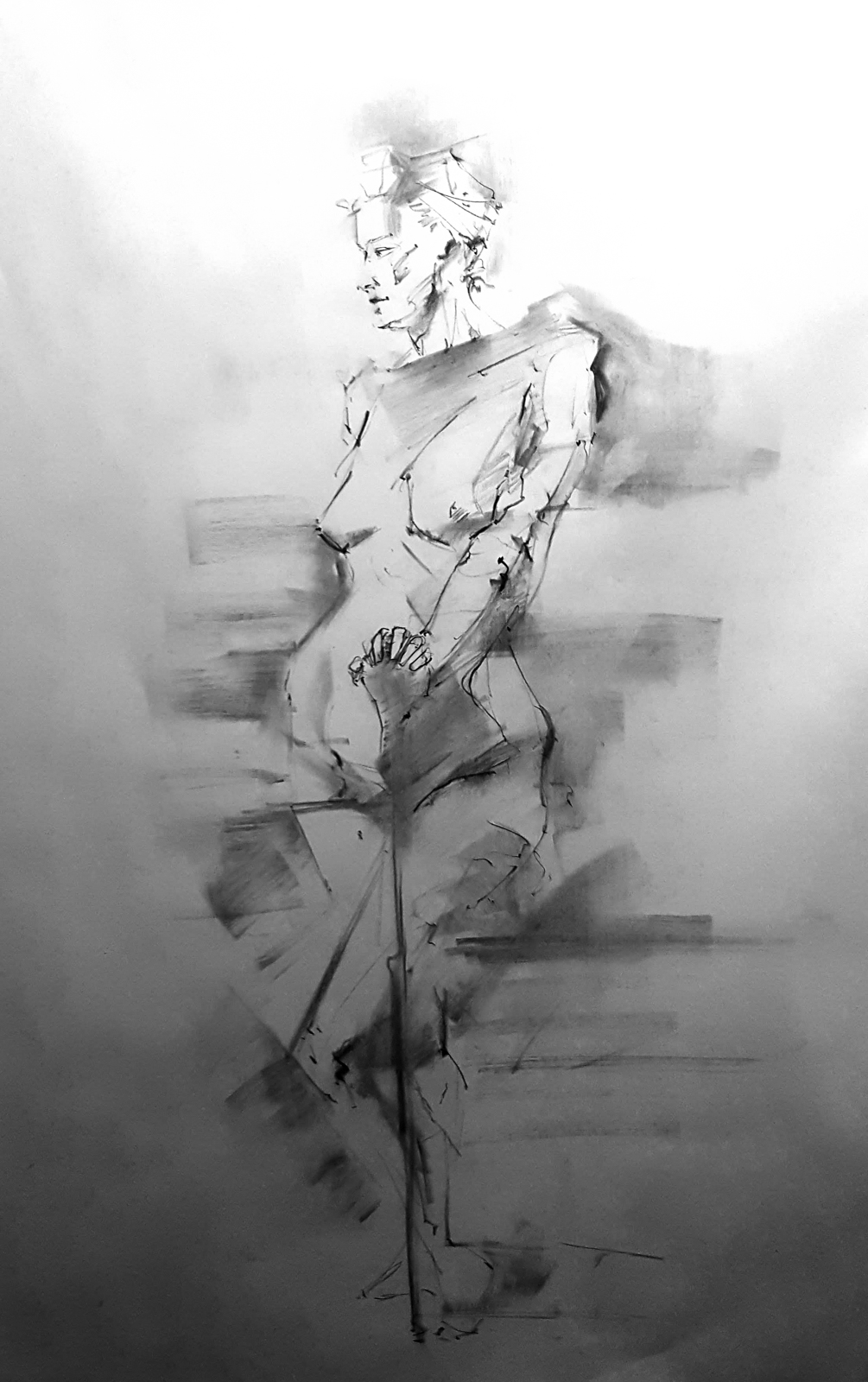 Scores of professional artists have come through Basic Inquiry’s doors since its founding by Gerald Kelly in 1983, as well as amateurs (including this writer), architects, tattoo artists, and art teachers. It’s easy to walk right by the nondescript window front on Main Street, tucked among struggling shops and cafes, with a view to the old railway station. Entrance is by way of a glass door, past shelves of donated art books and around a partition. Cupboards, counters, and sinks line the studio’s back wall, the surfaces cluttered with art supplies—and a tip jar for the model. As a non-profit, Basic Inquiry relies on volunteers and artists’ session fees. Remarkably, it has survived rent hikes, relocation, and the COVID-19 pandemic.

“It’s not about making money,” Larsen says. “It’s encouraging the artistic community in the pursuit of drawing nudes.” 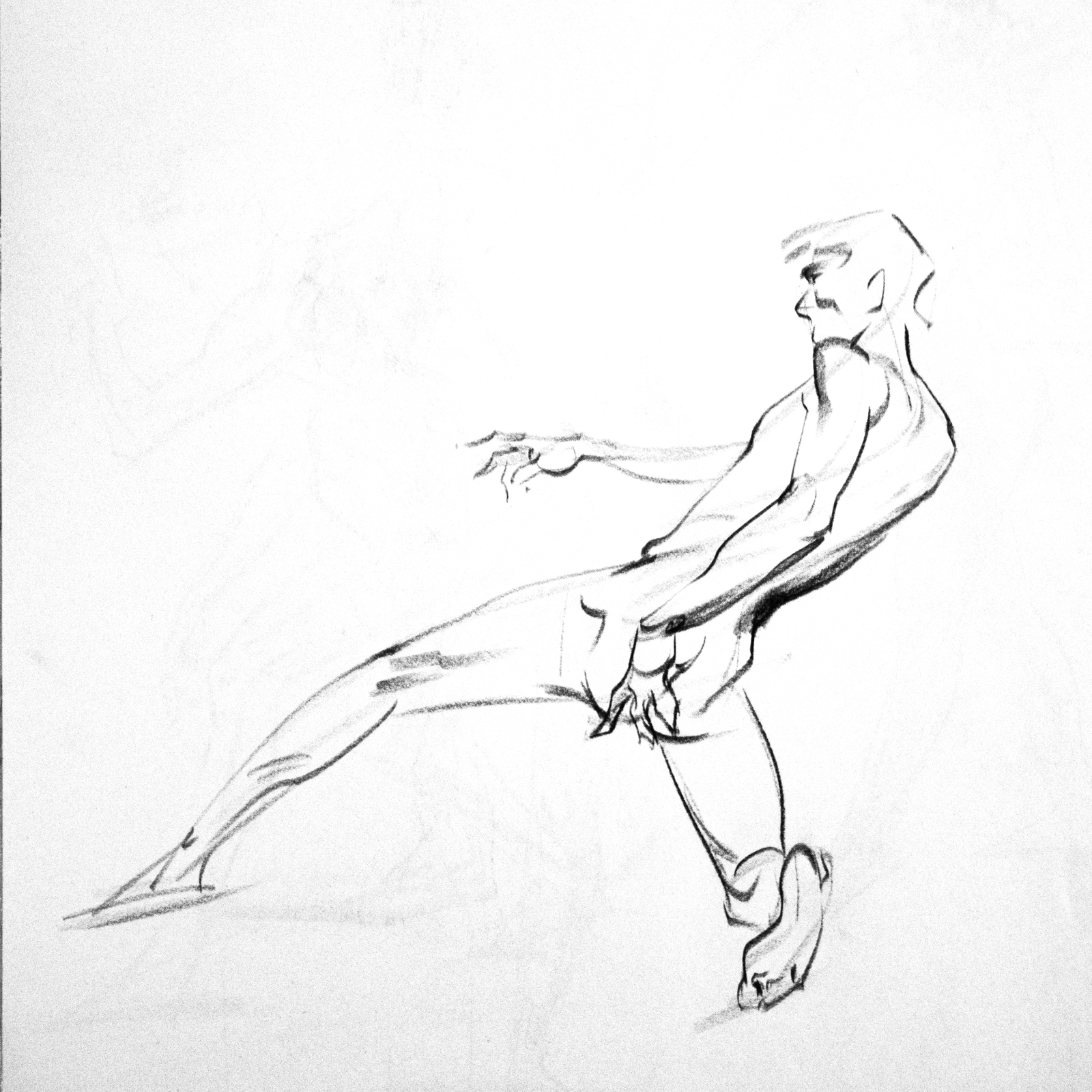 At a Wednesday-night evening session, Larsen recalls a well-known, prolific artist seated beside a person who had never done figure drawing. “Both were doing the same thing,” Larsen says. “There’s no hierarchy. You are there to draw. You learn from someone else.”

Larsen’s father attended Basic Inquiry back when the studio was a block north of its current location, inside a five-storey building near the Georgia Street Viaduct. An elevator with a manual scissor gate transported artists to the top-floor room. Larsen emphasizes the studio’s welcoming atmosphere, both past and present.

Animators are a new breed of artist populating Vancouver’s workforce, and many drop in to Basic Inquiry. Daniel Ding has been designing digital backgrounds and props for animation characters for local “Hollywood North” studios since graduating Capilano University four years ago. During his high school days in Burnaby, Ding attended Basic Inquiry on the recommendation of an art teacher. Now he’s back to practise his drawing skills.

“You have to produce quickly,” he says about his animation job. “You are expected to have high productivity. With figure drawing, you can relax. It’s for yourself and doesn’t require your client’s approval.” 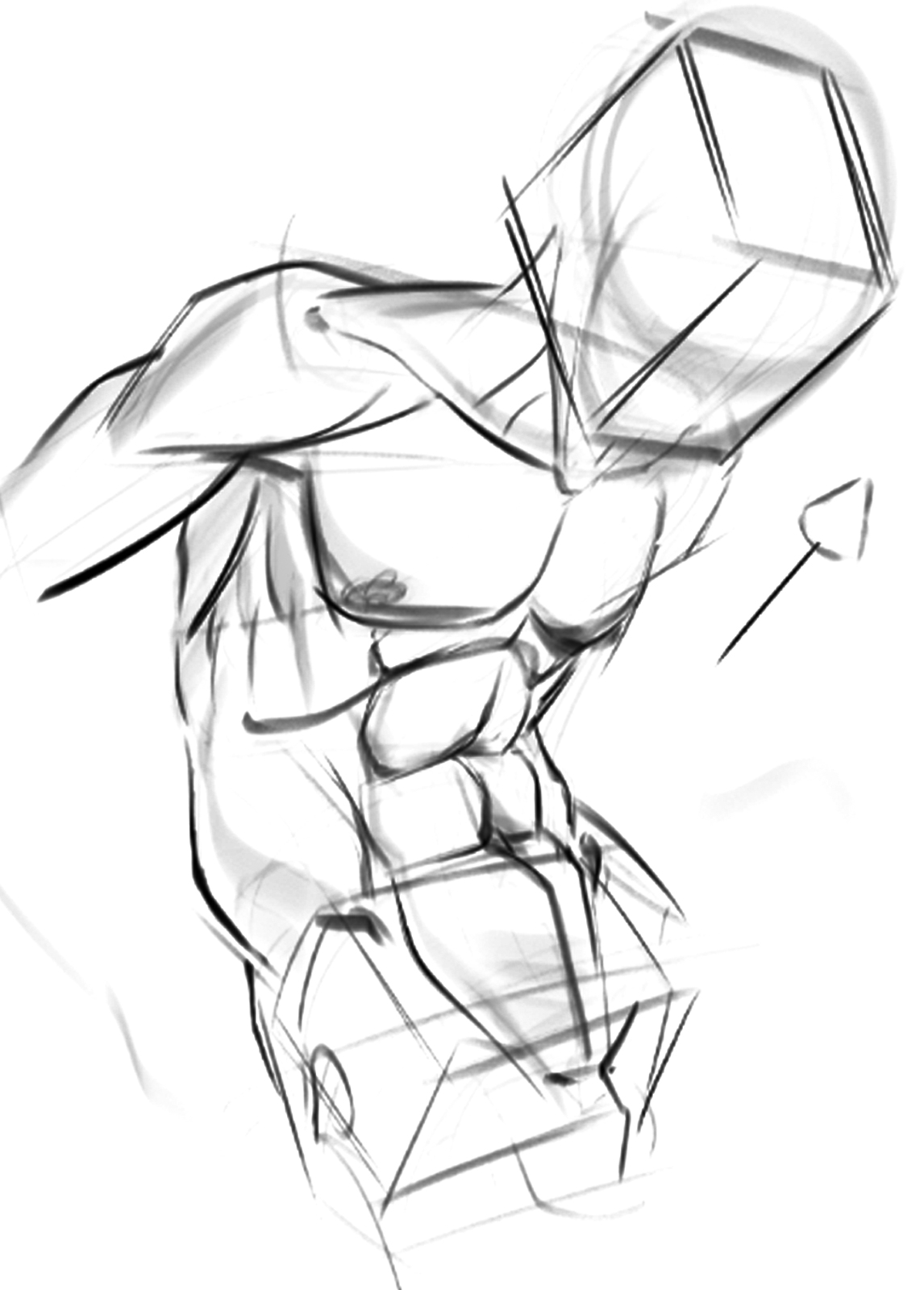 Ding says drawing from a live model allows him to see the figure from different perspectives. “You can look at the entire body instead of the details.” He enjoys exploring various media at studio sessions, learning different ways to draw and working on a canvas larger than a computer screen.

Animation is creative too, he hastens to point out. “You get to see other animators’ impressive work and collaborate and learn techniques such as 3D models.”

Software does make it easier for artists to modify a drawing, Ding notes. “There’s a fear technology will make traditional art less relevant,” he says. “I noticed my skills were decreasing doing [animation] design. Real-life drawing is more unforgiving if you make a mistake. You have to start over or fix it. It’s good training.”

Ultimately, Ding sees the benefits of both the old and the new ways. “Live model drawing is important,” he says. “It inspires animation work.” 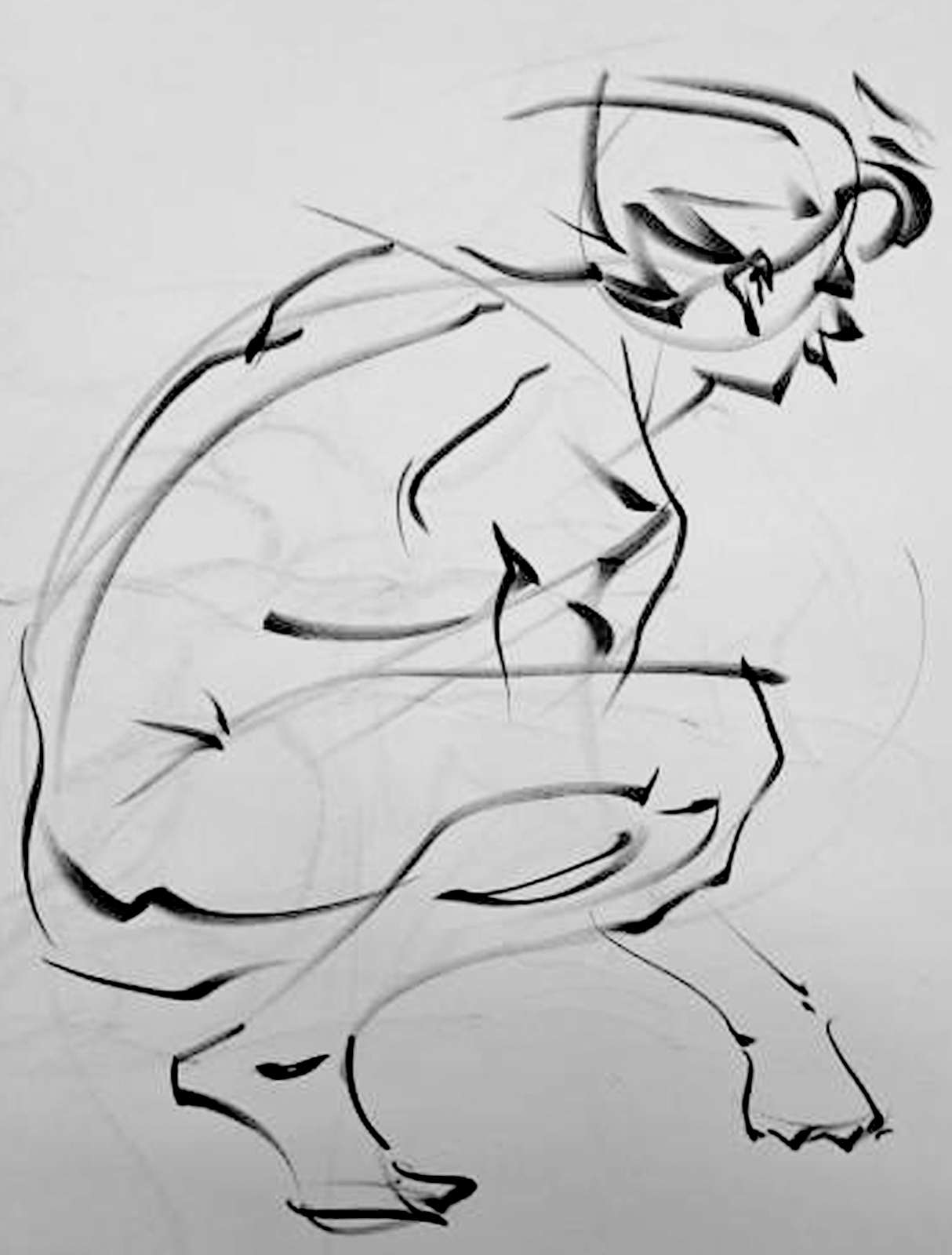 Suzanne Saint Pierre is a retired real estate agent with a long-held passion for art. She’s been a regular at Basic Inquiry since 2010, serving on the board and exhibiting her work on the studio walls. “I have a curiosity about people. I try to capture the personality and energy. Having the whole body exposed is a way to have more information about the person. The way the models hold themselves. The gestures. The movements.”

Saint Pierre has met artists visiting from other parts of the world, including China, Taiwan, and Puerto Rico. “People find Basic Inquiry,” she observes. “It’s a small, comfortable group. They keep coming back.” 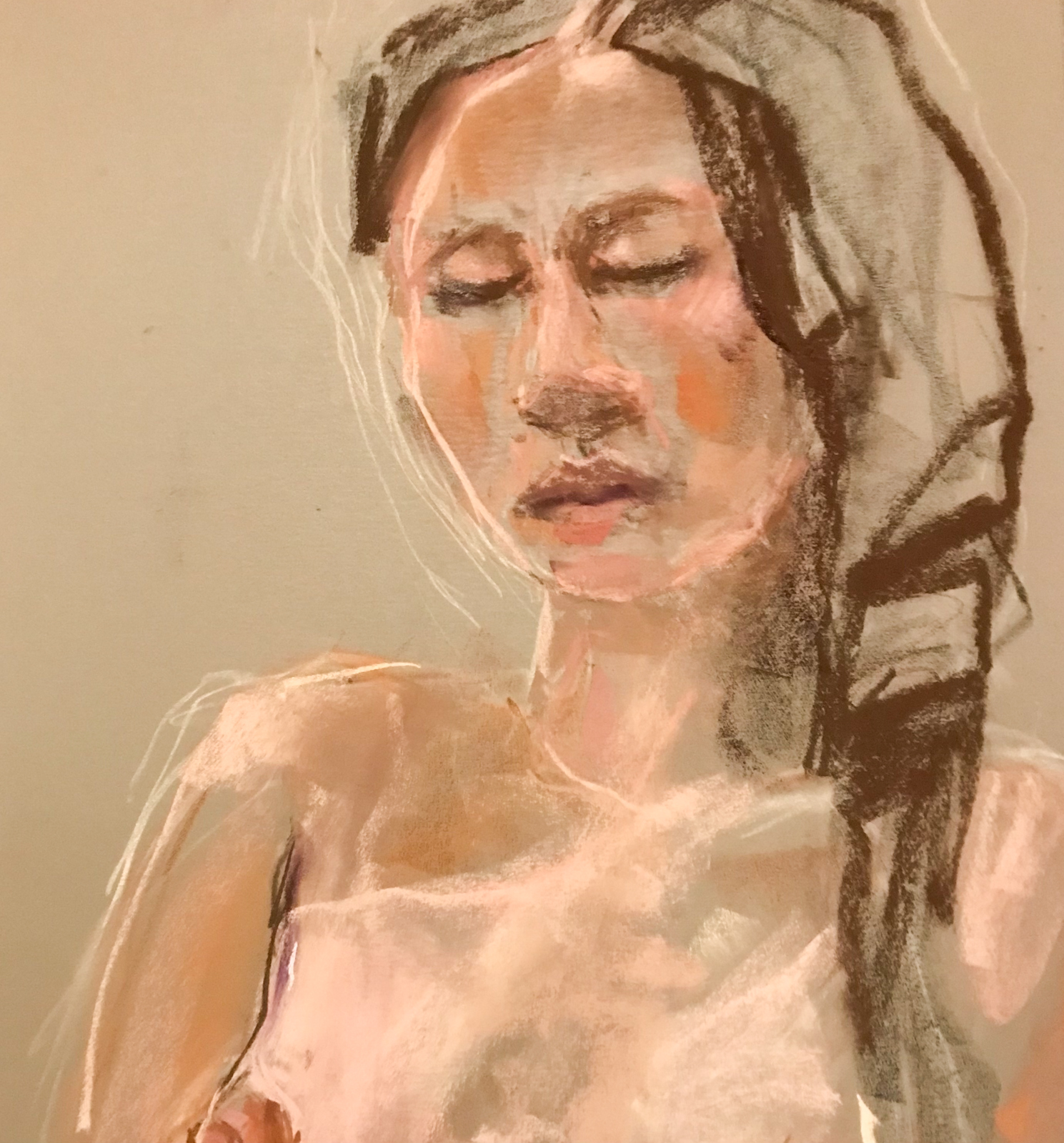 She recalls taking her daughter to the original location near the viaduct. “Years ago it was pretty laissez-faire. A small group of committed people were running it. By the time I started going, a lot more people were dropping in and there were core groups on certain days.”

“Regulars” are slowly returning to the studio, and Saint Pierre counts herself among them. “Figure drawing is like a meditation,” she says. “It’s exhausting too—that level of focus for three hours. Time goes by in a flash.”

Ezra Larsen has recently cut back on modelling assignments, working instead as a scenic fabricator, creating scenery for stage sets and other venues around the city. All his spare time is devoted to creating fine art—much of it figure drawing—and his latest show is part of Vancouver’s annual Eastside Culture Crawl. Still, Larsen always makes time for drawing sessions at Basic Inquiry.

“You do get rusty,” he says. “Not as fluid and precise and quick as you used to be. If I take a month to six months off, I have a bit of a tough time. You have to keep lubricated. That’s why people go.”