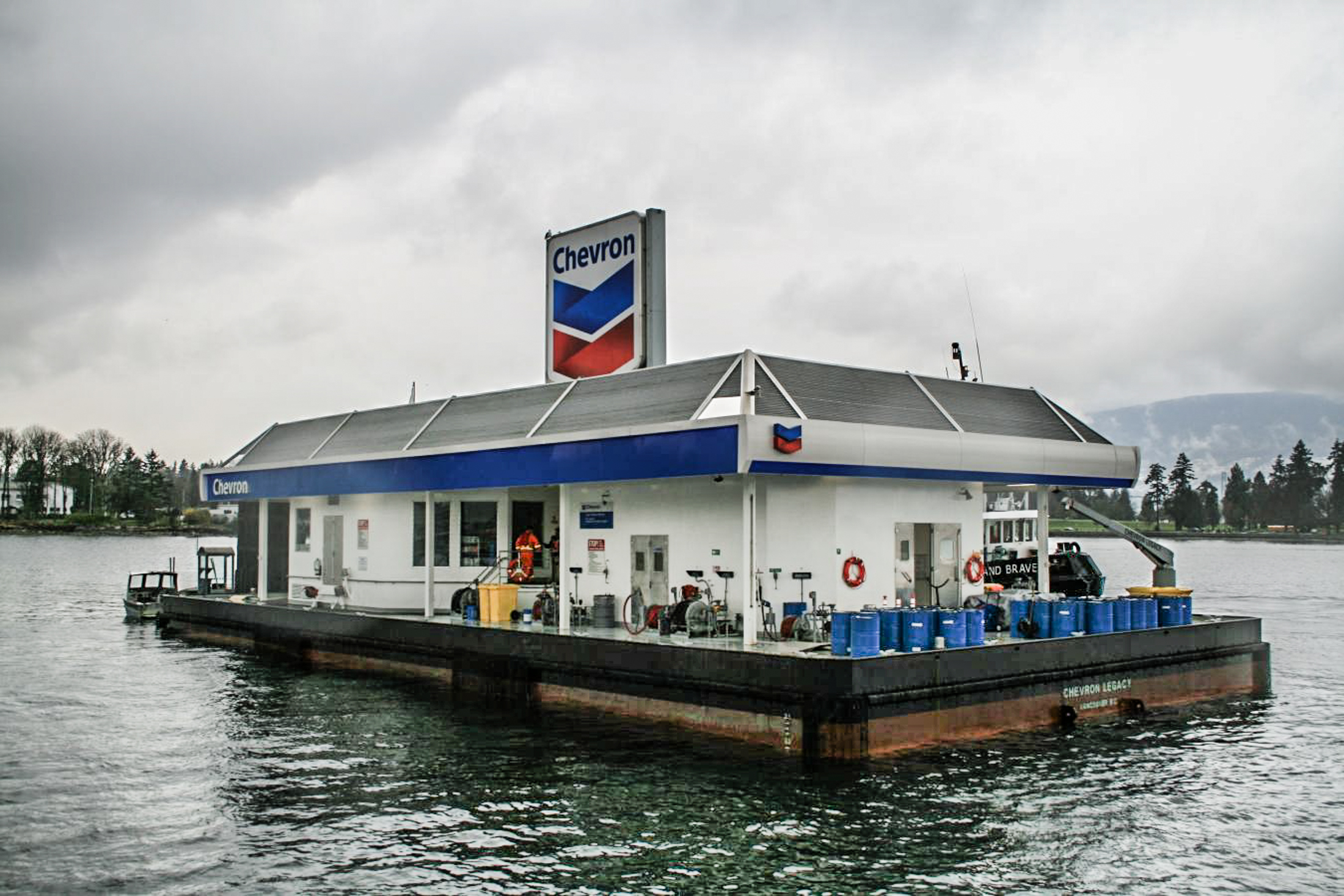 Chances are, if you’ve ever walked the Coal Harbour waterfront, you’ve noticed the Chevron Legacy fuel barge. The floating gas station has been a local landmark (or should we say watermark?), in one form or another, for more than 80 years. Designed by naval architecture firm Robert Allan Ltd. and installed just in time for the 2010 Winter Olympics, the current barge is the third generation since Chevron (originally known as Standard Oil) first entered the marine fuel game back in 1936. And while it was once part of a thriving hub of Coal Harbour stations known as Gasoline Alley, today the barge is a unique creature; not only is it the last of its kind in B.C., but it’s also the only self-contained fuel station left in the Chevron (now called Parkland) organization.

“This is the only barge of its kind—that I’m aware of—in all of Chevron,” says Parkland’s Adrien Byrne. “Even globally, I don’t think they have anything else like this.”

Bart Stockdill, one of the Chevron Legacy’s project leaders, agrees. “It’s a bit of an unusual beast,” he says. “Normally a marine fuel station will have its tanks onshore, and fuel will come out to it by pipe. But here, everything is self-contained.” 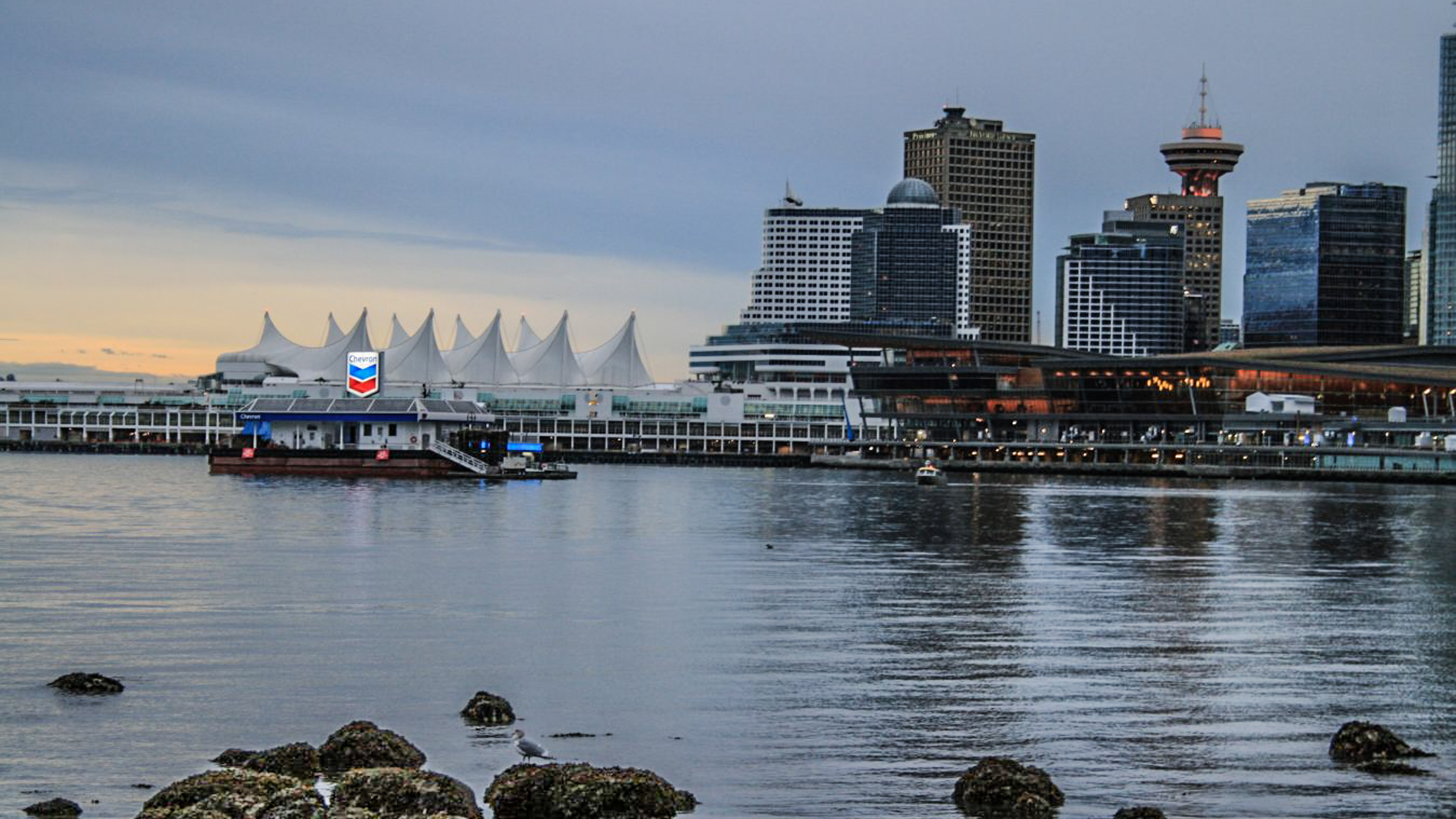 Capable of dispensing a whopping 50 million litres worth of fuel per year, the barge has all the features one would expect from a marine gas station—mooring docks, fuel pumps, and a (limited) Town Pantry—but also includes a spacious crew lounge, pump rooms, fuel storage, and a workshop. It’s able to hold more than a million litres of marine oil and 100,000 litres of gasoline, and, Byrne notes, usually requires refuelling once every week or two. Used by pleasure craft and commercial vessels alike, it was designed with a safety-first mentality; the barge features a double hull, a fire suppression system, and rainwater recycling, and, Stockdill notes with a laugh, it is even earthquake-proof.

“A lot of it was driven by regulation,” he explains. “The shape and the layout and so on, it was all done with safety in mind. It’s essentially a box of tanks with a steel deckhouse on it. And the roof structure and logos were all spelled out by corporate standards. We did the best we could to make it look good, but the first priority was designing it to be as safe as possible.”

Chevron couldn’t have found a better partner than Robert Allan Ltd.; the firm’s relationship with Chevron and its fuel barges goes back more than half a century, when it designed the previous station: the venerable Standard Oil No. 5, which was installed in Coal Harbour in 1959. And, as Robert Allan’s Rollie Webb recalls, back then, they had plenty of company. “As a kid growing up around here, I can remember five or six barges along the shore of Coal Harbour,” Webb muses. “Every oil company had one: Standard, Esso, Texaco, Shell. They all seemed to have one, dating back to a little after the First World War when gas engines started to get used on fishing boats and yachts.” 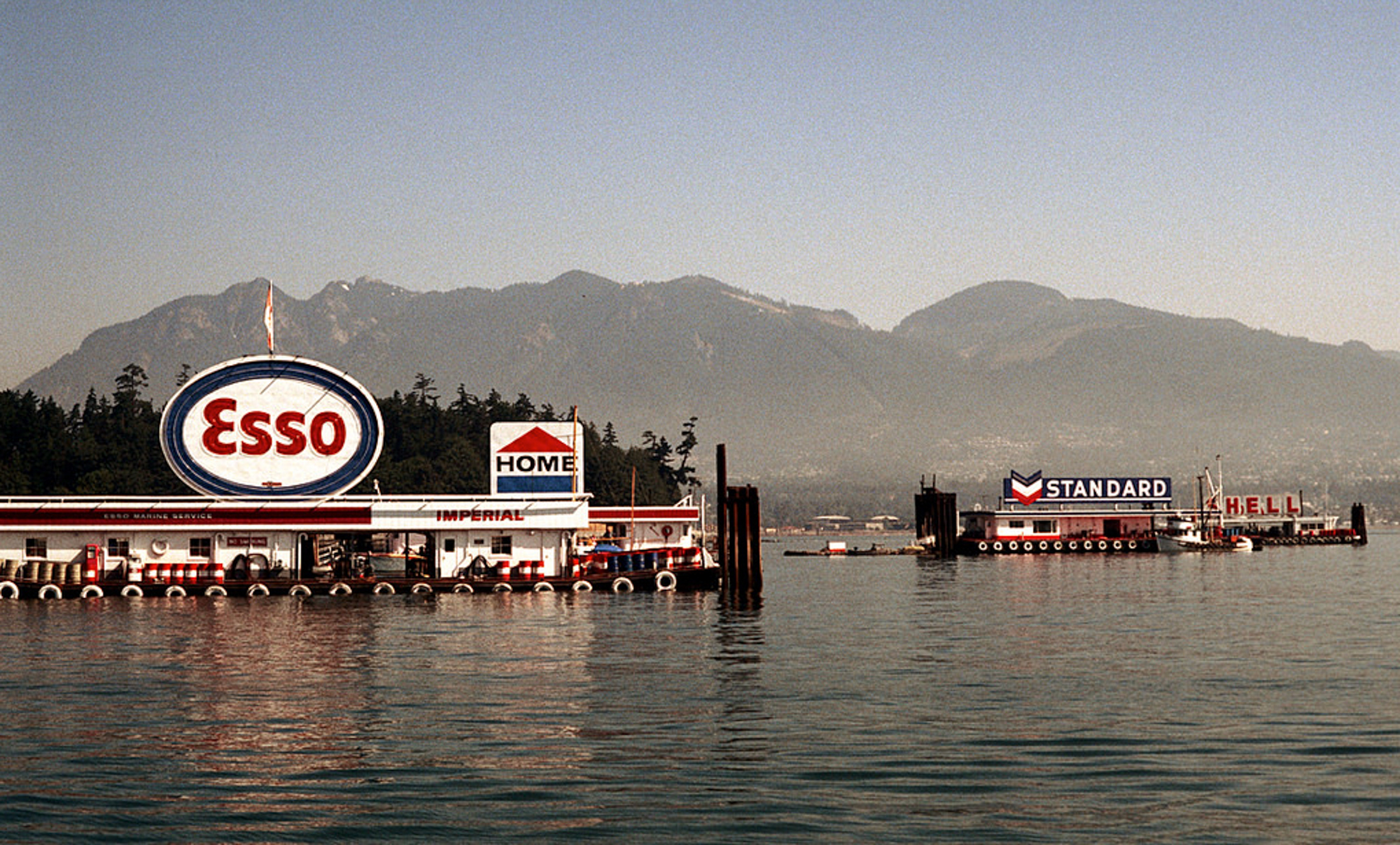 Gasoline Alley in the 1970s. Photo Courtesy by Nick DeWolff.

According to photos unearthed in the Vancouver Archives, floating fuel stations have been in Coal Harbour since at least 1923. The first generation were made of wood (though mercifully, with metal tanks), until steel construction became common after the Second World War. Standard Oil entered the marine fuel game only one year after its B.C. division was established in 1935, and the original barge (known as Standard Oil No. 4) was the work of one F. Bagshaw, a Vancouver architect who also designed the National Machinery Co. on Granville Island. And, as Webb points out, that initial station and its competitors were installed to address a need beyond just the monetary.

“When gasoline engines first came around, nobody wanted to fuel them at their boathouse,” he says. “There were an awful lot of boats that caught on fire and blew up because people didn’t know how to handle gasoline. So it was a bit of a self-protection thing to put these conveniences out where they were a bit removed from the waterfront. That way, you couldn’t start a fire.”

By the mid-1930s, Standard, Shell, and Home Gas had stations in Coal Harbour. Home Gas in particular was a big player in the Vancouver of the ‘30s and ‘40s; not only did it have a second station beneath the Burrard Street Bridge, but it also sponsored both a baseball team and the “Home Gas Sunday Symphony Hour” at the Malkin Bowl. By the time Standard Oil No. 5 was installed in 1959, that area of Coal Harbour was known unofficially as Gasoline Alley, and was home to a total of five marine fuel stations: Standard Oil, Shell, Esso, Home Gas, and Texaco. And while the current Chevron Legacy was built for safety, Standard Oil No. 5’s design would have made today’s naval architects positively apoplectic.

“It was 1959, so there were no real safety requirements,” Stockdill notes. “The old barge was just one plate of steel, with diesel fuel right on the other side of it.” 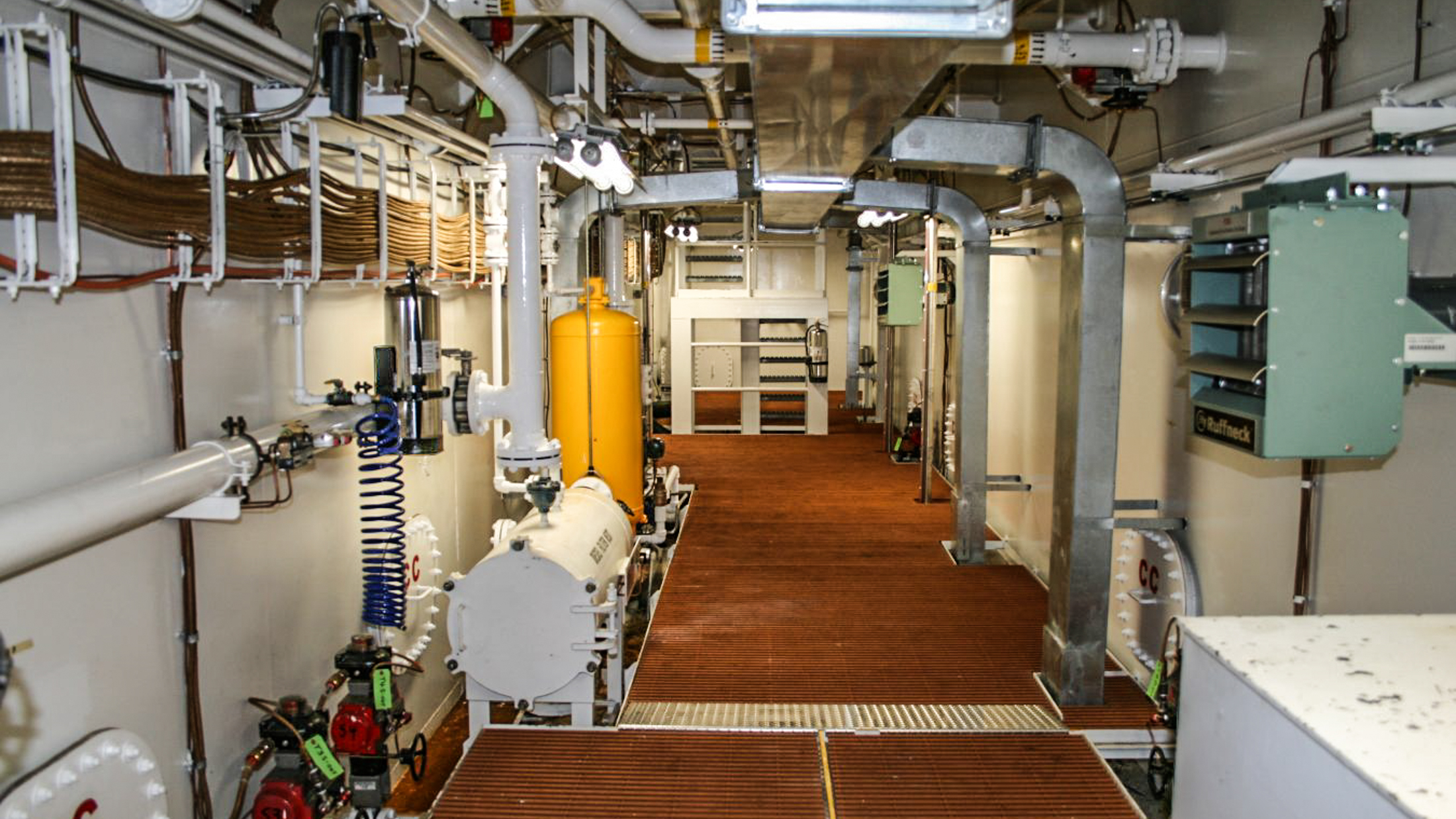 Incredibly, Standard Oil No. 5 seems to have survived without any major incidents. However, at least one other station wasn’t so lucky; in January of 1974, the Home Gas barge exploded, killing three people including the manager and a 17-year-old boy. As the years went on, company after company got out of the marine fuel game, in large part, Webb explains, because of liability concerns. By 2008, Esso—Chevron’s only remaining competitor—sold its marine holdings, including a gas station in Coal Harbour and another in False Creek. Surprisingly, despite having only a single hull, and having been anchored in Coal Harbour since the late ‘50s, Stockdill says that Chevron’s barge was still in reasonably good shape when it was replaced.

And although it’s been almost a decade since the last of its competitors left the marine fuel business, Byrne stresses that Chevron itself has no plans to pull up anchor anytime soon. “There’s no intention of giving it up,” he says firmly. “It’s state-of-the-art. It’s very important to the operation of the port. And it’s also a great ambassador for the Chevron brand. It’s in an excellent location in a beautiful harbour. Locals and tourists alike tend to be drawn to the barge when they’re visiting the Seawall. It’s a Vancouver landmark.”

This article from our archives was originally published on December 12, 2017. Read more stories of Hidden Vancouver.