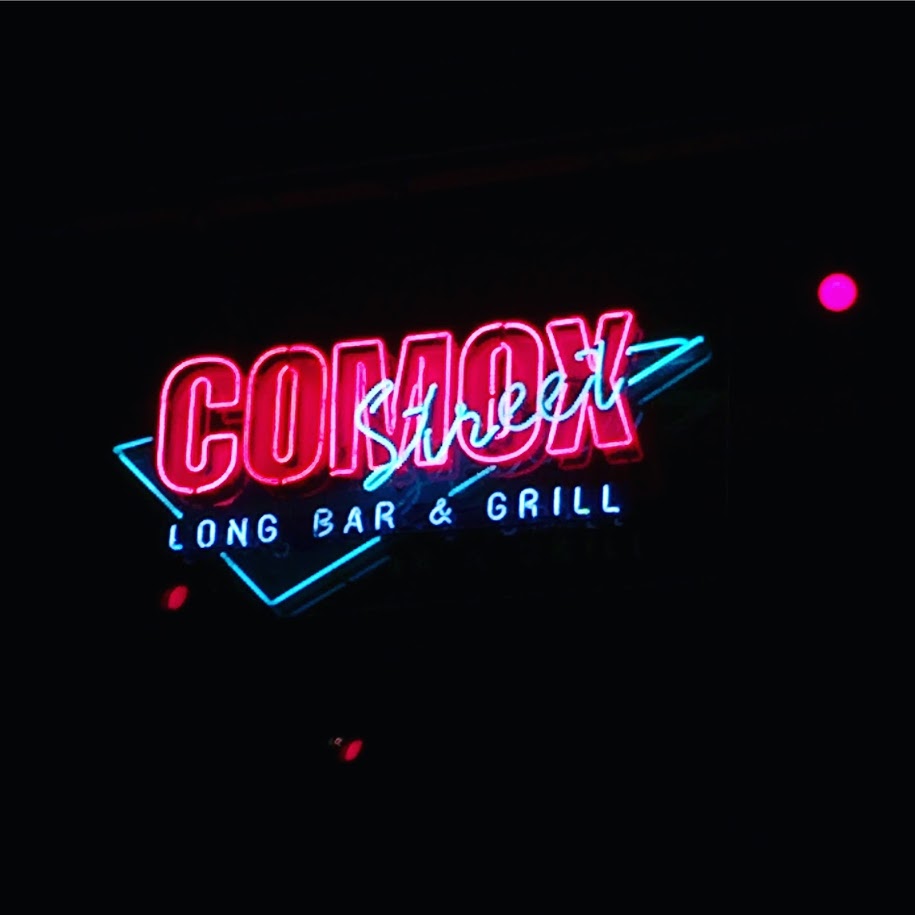 It’s Friday night at the Comox Street Long Bar, and that means karaoke. All the hardcore regulars—a disparate group, ranging in age from their forties to seventies—are at their usual table, scribbling song requests onto slips of paper. Around them, birthday partiers, troupes of old pals, and lone wolves are ordering $5.50 retro cocktails that come in bright, primary colours and taste like mint, cherry, or banana amoxicillin from Mary-Lynne, a beloved employee of the bar for 33 years. Up front, beyond the couches and beneath a section of inexplicably mirrored ceiling, lights tinted the same garish cyan and red as a pair of 3D glasses have been turned on to demarcate the presence of a makeshift stage. The first singer stands within their unearthly glow and takes the mic—he is a septuagenarian regular named Blues, and he’s singing the blues. He is followed by a charismatic thirtysomething known as Beef, who coincidentally performs Elton John’s “I Guess That’s Why They Call It the Blues.” The night is off to a good start.

The Comox is the platonic ideal of a dive bar—the kind of place everyone wants to find, where you’re certain to recognize faces, likely to spontaneously run into friends, and miraculously able to make new ones in spite of urban isolation’s dispiriting creep. Losing it when its location—the Coast Plaza Hotel—closes on Nov. 20, 2017 will be a blow to the West End community, where the bar has been operating, in various incarnations, since 1983.

When what’s now the Comox first opened, it was known as Shampers, “Vancouver’s only Champagne disco bar.” Back then, servers clad in Alfred Sung-designed uniforms served Moet & Chandon and finger-foods developed by students at Emily Carr University of Art + Design to VIP businessfolk with blocky suits and crunchy hair. But by the 1990s, the scene at Shampers had changed for the worse. “It got taken over by certain people,” says Don Murphy, the Comox’s manager of 23 years, referencing a history of drugs and fights. “We changed it into more of a sports bar to make it more welcoming to the neighbourhood.” Pool tables were added, prices were dropped, live music became a fixture, and the bar was re-christened as the Comox in 1996, its lambent teal and pink sign erected over Denman Place.

The changes worked, and Murphy’s vision of the Comox as a welcoming community hub became a reality—to many, it’s an irreplaceable second home. “For the last 15 years, I’ve been there pretty much every weekend,” says regular Mark van Zant, who especially appreciates the Comox’s live music scene as many bars increasingly opt for generic playlist ambiance. “The bands they’ve had… People from Trooper, from Doug and the Slugs, from Prism, Bryan Adams Band… all these Canadian recording artists that play there—you wanna see these guys, you can see them for free at the Comox.”

Indeed, reflecting on the history of a space can reflexively conjure celebrity phantoms—Farrah Fawcett used to come here, so did George Wendt (that’s Norm from Cheers)—but of course, stars are not the point of the Comox, locals are. Van Zant likens the effect that the Comox’s absence will have on its regulars to that of the Dover, a neighbouring pub that shut its doors in March. “There was this whole whack of white-haired people—even older than me, and I’m 55—they would go there on Sundays and dance the afternoon away,” he says. “[The Dover] closed and I just think of all those people in their sixties and seventies, and that was their big social experience of the week, and when the Comox closes I feel the same thing—there’s going to be a lot of people for who it was a regular place and that’s going to be an empty spot in their social life.” Murphy feels the same way: “A lot of these regulars, I don’t know where they’re going to go,” he adds. “They say sometimes, ‘I don’t go anywhere else.’”

The spectrum of people who scale the stairs up to the Comox’s front door, walking by its convex exterior wall of frosted glass bricks and into its Lynchian world of faded luxury, are not necessarily well-represented elsewhere in the city’s nightlife scene. Where else could you imagine that a middle-aged Russian woman who appears each week alone, without speaking or understanding a word of English, would be content to share a sofa with random giddy parties of bachelorettes? Where else would the George in a Beatles tribute band offer you some of his “weed, like the kind we had in the seventies, none of that new, crystallized stuff” when you venture outside? At what other karaoke night do so many people get up and dance to everything from Salt-N-Pepa, to Frank Sinatra, to Shania Twain?

The closing of a good bar makes you think about what is right now, and what will be in the future. “The Comox is going to be missed,” Murphy says, “not just by the staff, but the neighbourhood for sure.” He’s planning a blowout party for Nov. 9, and after the 20th, Murphy plans to take a vacation. “People always say, ‘When you gonna close?’” he says. “And I say, ‘When you see me inside sitting at the bar drinking a beer and you can’t open the door.’”