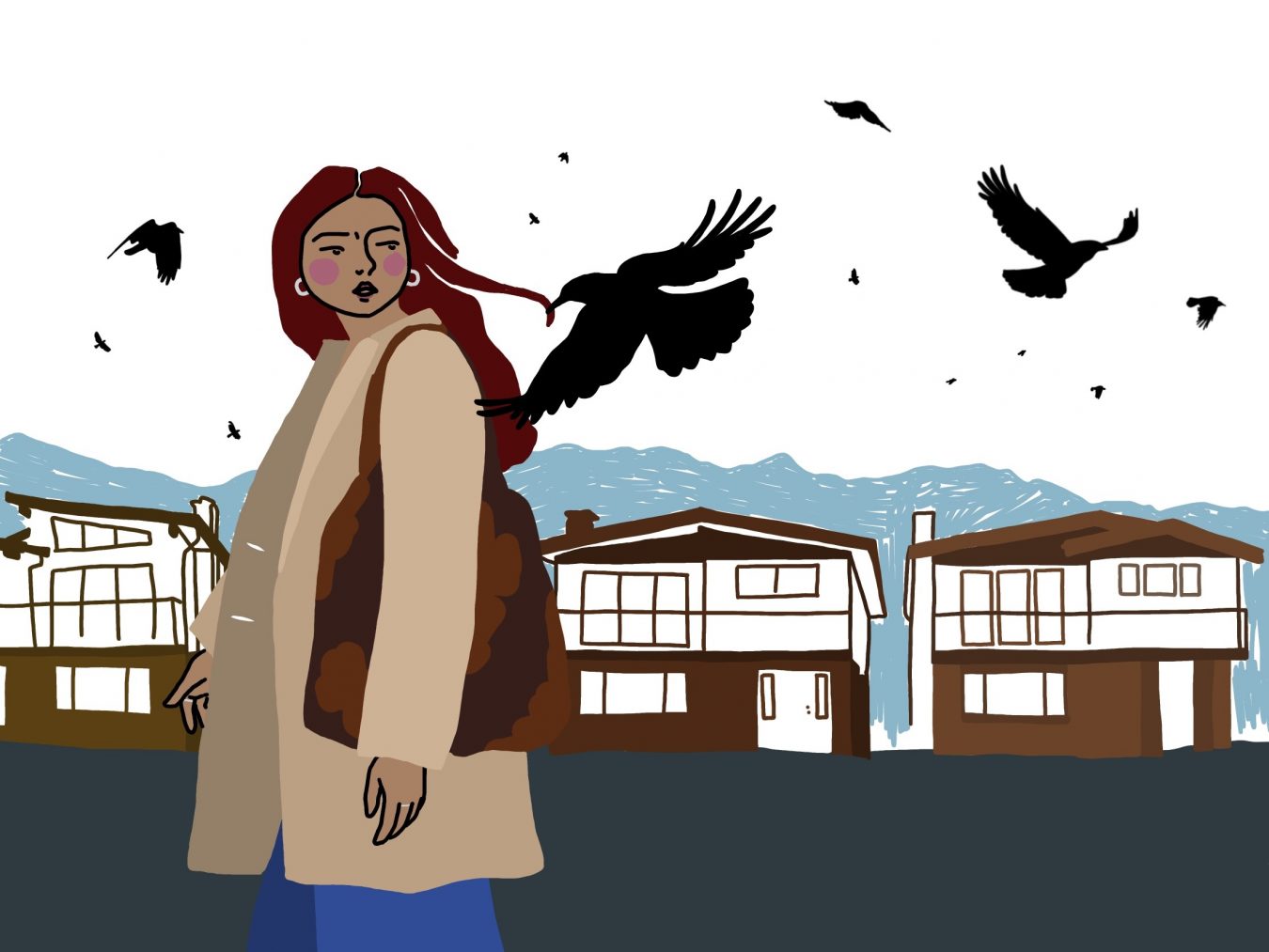 I was working in my apartment one morning when I became distracted by a flurry of activity on my balcony. A crow had landed on my hanging basket and was squawking loudly. “Get lost, dummy!” I yelled. It flew away.

While watering my flowers later that day, I discovered a half-eaten KFC chicken bone in the basket. Looking up, I saw a crow watching me from its perch on a decaying power pole across the street. Was it the same crow? Was the bone a warning? A gift? Its black eyes were ambiguous.

Alfred Hitchcock tells me crows are murderous. Mythology tells me they’re tricksters. Residents of Vancouver, and East Van in particular, have their own stories: local celebrity Canuck the Crow is best friend to (human) Shawn Bergman. One crow is known to follow pedestrians walking down the quiet residential streets between Commercial and Victoria. Thousands of crows fly each night to neighbouring Burnaby to roost.

All these stories had me wondering what the feathered lurkers are really like. So, as a graduate student of literature, I set out to understand them the only way I know how: through a character analysis, like one might do in grade school after reading Frankenstein or Beowulf.

Having many complex character traits, Victor Frankenstein’s tortured and torturous monster is round; Beowulf, our quintessential hero, is flat thanks to all that valiant monotony. What of the crow? One trait is its intelligence: a crow can anticipate future events, make and use tools, and learn skills not only from other crows but also other species, all of which are behaviours seen only in a few animals. Crows have upwards of 30 calls, which can be combined together to create elaborate threads of communication. And they have predilections: they prefer to eat, for example, fries in McDonald’s packaging over fries in plain brown bags.

Crows are flexible problem-solvers, but they also have their rituals: every fall and winter night, between 3,000 to 6,000 crows roost in a city block around Still Creek in Burnaby. Scientists believe they spend the night there for warmth, for safety, and to socialize. During the warmer months, monogamous crow couples build their nests along residential streets and in city parks, and sometimes receive help raising their young from older offspring who are unsuccessful in finding mates.

Like humans, crows enjoy foreplay, sunbathing, and getting drunk. Let me explain. Researchers have noticed crows performing certain rituals before sex: they vibrate their tails, extend their wings long, and make specific vocalizations. And don’t be surprised to see a crow basking in the sun around Trout Lake on hot days; the rays turn the bird’s natural oil into a source of vitamin D. Further, “anting” is the process of a crow squishing ants with its beak and rubbing the insects’ guts over its feathers. The ants release formic acid as they’re crushed, which might deter parasites, although scientists suggest it could also be intoxicating. Nature writer David Quammen wonders if this is a sign of boredom following the crow’s evolutionary success. As in, crows might have Beckettian existential crises about their purpose in life and get drunk to quell their woes—not entirely dissimilar to the young folks inhabiting Commercial Drive and Main Street. I would like to suggest that this, if nothing else, makes the crow a round character.

Does the crow change throughout this story I’m close-reading, or does it remain the same? I would argue that this character is dynamic for two reasons: the first is its ability to develop within its lifespan thanks to its excellent memory. Take, for example, facial recognition. Many of us have been sort of grossed out to learn that crows can identify human faces. But not only will a crow remember me if I scold it while hastily crossing the street—other crows will learn through the defensive bird’s behaviour that I’m a threat. Essentially, if I’m a jerk to a crow (which I try not to be), it will assemble a mob, and that mob will never forget.

But the crow is also dynamic because of its evolutionary success: it has adapted to an environment that humans incessantly change. Crows learn from our shifting behaviour, discover what’s edible in our dumpsters, find ways to survive in shrinking natural habitats, and learn to settle into urban environments.

A good analysis ends by identifying the character’s type, so I’d like to suggest that if the human is the protagonist in this narrative, the crow is the foil.

Crows have been living side-by-side with humans since cave-dwelling times. They were generally considered good in the collective unconscious until the Medieval Period; when people witnessed crows plucking eyes out of fallen soldiers on battlefields, the birds became tied to the supernatural and, eventually, death. A flock of crows became a “murder,” and the negative associations grew from there.

But let’s not forget how violent the Medieval Period was; civilization provided the wounded soldiers in the first place. Today, we provide the dumpsters, the forgotten McDonald’s fries on the streets, the concrete and glass habitats. As a crow’s survival depends on its ability to adapt to human society, doesn’t its behaviour reflect our own? Maybe if we look deep enough into those beady little eyes, we’ll see a reflection of ourselves.

This story from our archives was originally published on April 14, 2019. Explore our Essay archive.