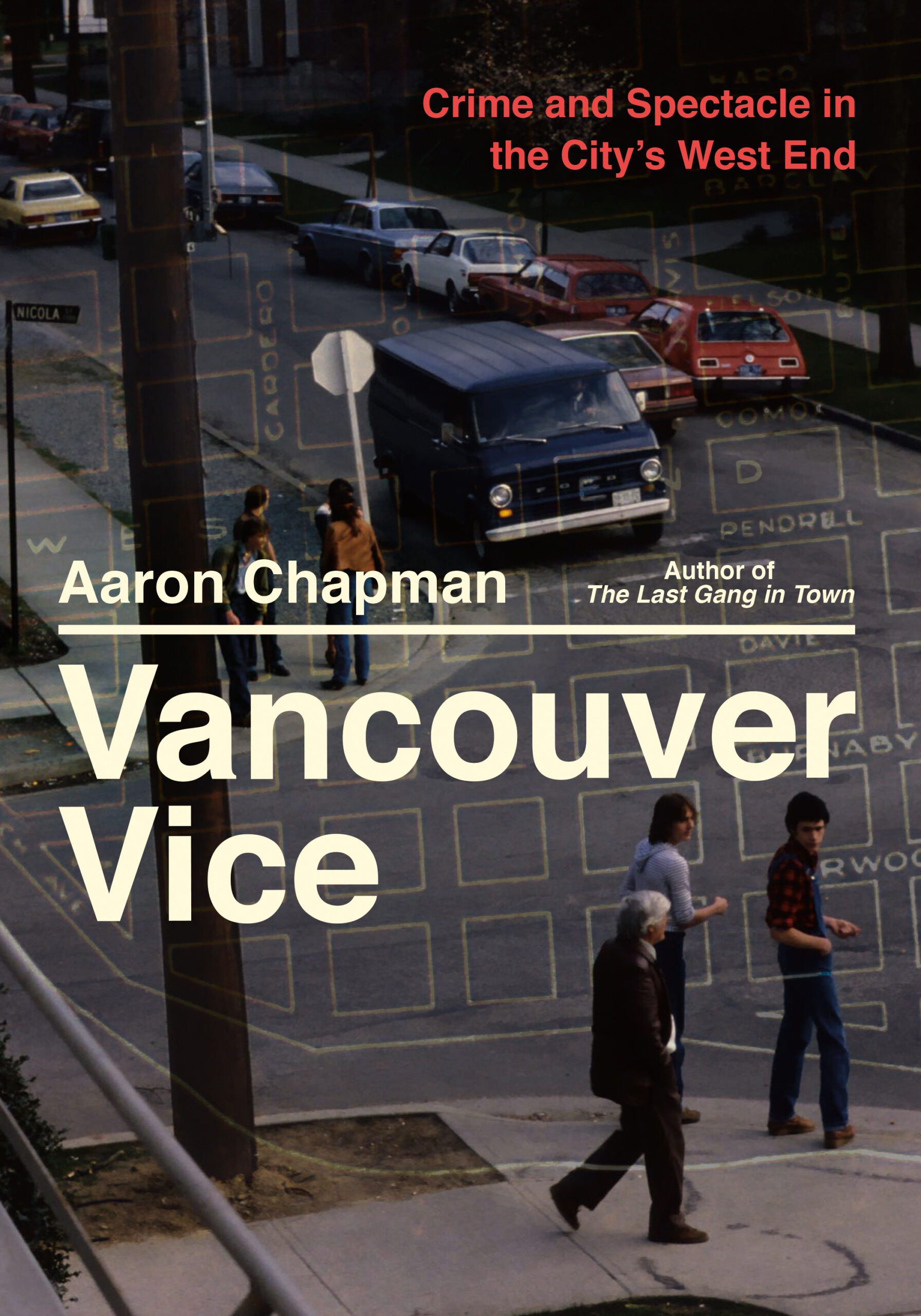 Aaron Chapman’s new book Vancouver Vice explores the dark and seedy side of the West End’s history in the 1960s and 70s. Social change, turf wars, crime, and a looming epidemic keep the tree-lined streets of one of Vancouver’s oldest neighborhoods on edge. Chapman digs deep into the events that brought the now-gentrified neighbourhood into the forefront of public debate in this murder mystery mixed with investigative expose and cultural history.

The closure of downtown Vancouver’s Penthouse Nightclub after a police raid in 1975 is often cited as a cause of the growth of street sex work in the West End. Since the 1950s, the Seymour Street nightclub had a reputation as an establishment frequented by sex workers—a de facto red-light district unto itself. It had been dubbed by a Vancouver Sun reporter of the time as a “union shop for hookers.” By the 1970s, as many as 100 sex workers a night had come to use the nightclub as a working venue—a convenient and safe place to meet customers. “You could pretty much see the ruts that ran like streetcar tracks in the road from the Penthouse to a couple of West End apartment buildings, or to hotels where the tricks were staying,” recalls taxi driver Paul Dixon.

The Penthouse had a well-earned reputation in the city as a popular nightspot for visiting entertainers, rounders, news reporters, and local show business people. The larger-than-life Filippone brothers, who ran the club, were veterans of Vancouver’s entertainment scene, bringing everyone from Louis Armstrong to Sammy Davis Jr. to town to perform. They also had a long history of flouting liquor laws, and an equally extensive accumulation of fines for bootlegging. The Filippones didn’t profit directly from sex work. They simply realized that having these women around was good for the nightclub’s bottom line. Sex workers, along with other patrons, had to pay a cover charge to enter the club. So the additional traffic’s impact on the club’s revenue made it worthwhile for the Filippones to look the other way. However, with the appointment of new chief constable Don Winterton in 1974, and new vice squad head Inspector Vic Lake, both of whom vowed to confront downtown prostitution head on, the Penthouse’s carefree days were numbered.

In the summer of 1975, patrons of sex workers were photographed coming in and out of the nightclub by undercover police hiding in a camper van across the street. Following a raid that December, the Penthouse was shut down, forcing a bitter three-year court battle that the Filippone brothers finally won on appeal. But in more recent years it’s been widely asserted in criminology and local history circles that during those three years the club was shuttered, sex workers were pushed out onto the streets of the West End and ultimately marginalized to other, less safe neighbourhoods. Many police of the era agree. “As far as I was concerned, the Penthouse was never a problem,” says retired detective Grant MacDonald. “Everyone knew what was going on there. But it was controlled there. After the trial, the hookers poured out into the streets all over the city, including to areas that were already dealing with it, but it really became like trying to capture quicksilver to manage it again.”

One of those areas was the West End, which now hosted not only the women who fled the Penthouse but also a growing number of cross-dressing male sex workers. For years police had regularly found male sex workers dressed as women, and occasionally trans women sex workers, along parts of Granville Street, or near Main and Keefer Streets, just outside of Chinatown. By the early 1970s, this was the case along the 1100 to 1300 blocks of Davie Street as well.

In an October 1971 story entitled “Pretty Men with Sex For Sale,” Vancouver Sun reporter Lisa Hobbs noted a rising number of cross-dressing men working in Vancouver, with as many as “100 transvestite prostitutes who streetwalk.” Hobbs noted that many of the residents and police officers she spoke to didn’t care what happened behind the closed doors of West End apartments where sex workers lived or worked out of, but that the activity had become so prevalent on West End streets at night that it was becoming a problem for the community as a whole. Hobbs’s article captured the kind of near-hysterical fear common among many residents of the era, noting that West End sex workers were “turning a residential area into an extension of a cheapside bar, where you don’t care for your teenage sons to wander, where Dad can’t go to the corner grocery without factoring the obscenities of a male tart.” Hobbs characterized one cross-dressing sex worker named John, who worked under the name Diane, as someone who “stops automobiles, bargains openly over a price, and accosts any adult pedestrian male who might prove to be a customer.” Diane, wrote Hobbs, represented “a disturbing element of real perversity.”

Hobbs writes nothing of the extreme prejudice faced by those in the cross-dressing and trans communities—even in the otherwise socially progressive West End—that left many marginalized and with few safe options for employment.

Regardless of the impact the Penthouse’s closure had on street sex work in the West End, the neighbourhood was experiencing massive change by the mid-1970s. A community that had developed twice as fast as the rest of the city was dealing with more than its fair share of growing pains.

In August 1974, thirty-three-year-old Serge Jean Leroux was found stabbed to death in a West End lane—another shocking West End crime that would go unsolved. Police made their usual appeal to the public for information, but with an additional incentive: Alex DiCimbriani, a neighbourhood millionaire and self-proclaimed “Mayor of the West End,” offered $10,000 to anyone who could provide information leading to an arrest.

The kind of character that only Vancouver in the 1970s could produce, DiCimbriani was actually from Ontario. He arrived in 1960 and soon began dabbling in real estate, buying old rooming houses (back in the days when a labourer and maintenance man could afford to do so) and, rather than demolish them, renovating them. His efforts provided needed affordable housing for pensioners and low-income families. By 1967, he had become the landlord of 330 suites and 100 bachelor apartments, with the Province newspaper lauding him as an “enterprising renovator who turns West End potential slums into apartments for a wide range of incomes.”

DiCimbriani’s life story had all the dramatic highlights of a latter-day Horatio Alger tale. The story went that he was born near Toronto and raised by nuns in an orphanage. He later would say that no one adopted him because of a speech impediment caused by his cleft palate. One day, at the age of eight, he was caught stealing an apple from a grocery store by a local policeman who would become his only friend. He said that the police officer had faith in him and secretly paid for an operation for his cleft palate. DiCimbriani said he never forgot the gesture.

By 1974, at the age of thirty-two, he’d risen through the ranks of Vancouver’s social and political set. His property acquisitions had made him a millionaire, and he became a big donor to the Social Credit Party that dominated provincial politics during the latter half of the twentieth century. He made public displays of his influence: he designed his own crest, Erkindale—the name of his apartment complexes—and wore it monogrammed on his blazers. He shelled out $25,000 to host a retirement party at the Bayshore Hotel for Vancouver police chief constable Jack Fisk. He was also a financial benefactor for a variety of West End cultural events. DiCimbriani began to boast to the press that the “Mayor of the West End” (a winking, honorary title that bestowed no power) would run for the actual office of mayor of Vancouver in the next civic election.

It’s difficult to pinpoint when things went sour for Alex DiCimbriani, but his glittering public image began to deteriorate in the mid-1970s as media investigations—particularly in the Vancouver Sun columns of Allan Fotheringham—dug into DiCimbriani’s past and revealed he was not who he said he was.

As it turns out, upon arriving in Vancouver he’d changed his name from Ralph Sims. He was not an orphan. In fact, he’d been brought up as part of a large family in Hamilton. A series of complaints revealed that he was not the enterprising businessman who looked out for the little guy. Rather, he was a hostile landlord who’d had a number of physical altercations with his tenants over the years and once even evicted an elderly woman unable to pay her rent during a hospital stay. While the reward he offered for Leroux’s murder was still up for grabs, DiCimbriani’s political dreams were dashed overnight. The Mayor of the West End never fully recovered.

In the 1990s, DiCimbriani pled guilty to defrauding more than fifty investors, including many of his old Social Credit party cronies, notably Premier Bill Vander Zalm, and eight VPD officers. The dark final blow to his reputation came when he was found guilty of sex crimes involving three boys, aged fourteen to sixteen at the time of the offences, and sentenced to a year in jail. Alex DiCimbriani, or Ralph Sims, or whoever he was, died in 1999. The $10,000 reward he’d offered twenty-five years prior was never claimed, and the murder of Serge Leroux was never solved.