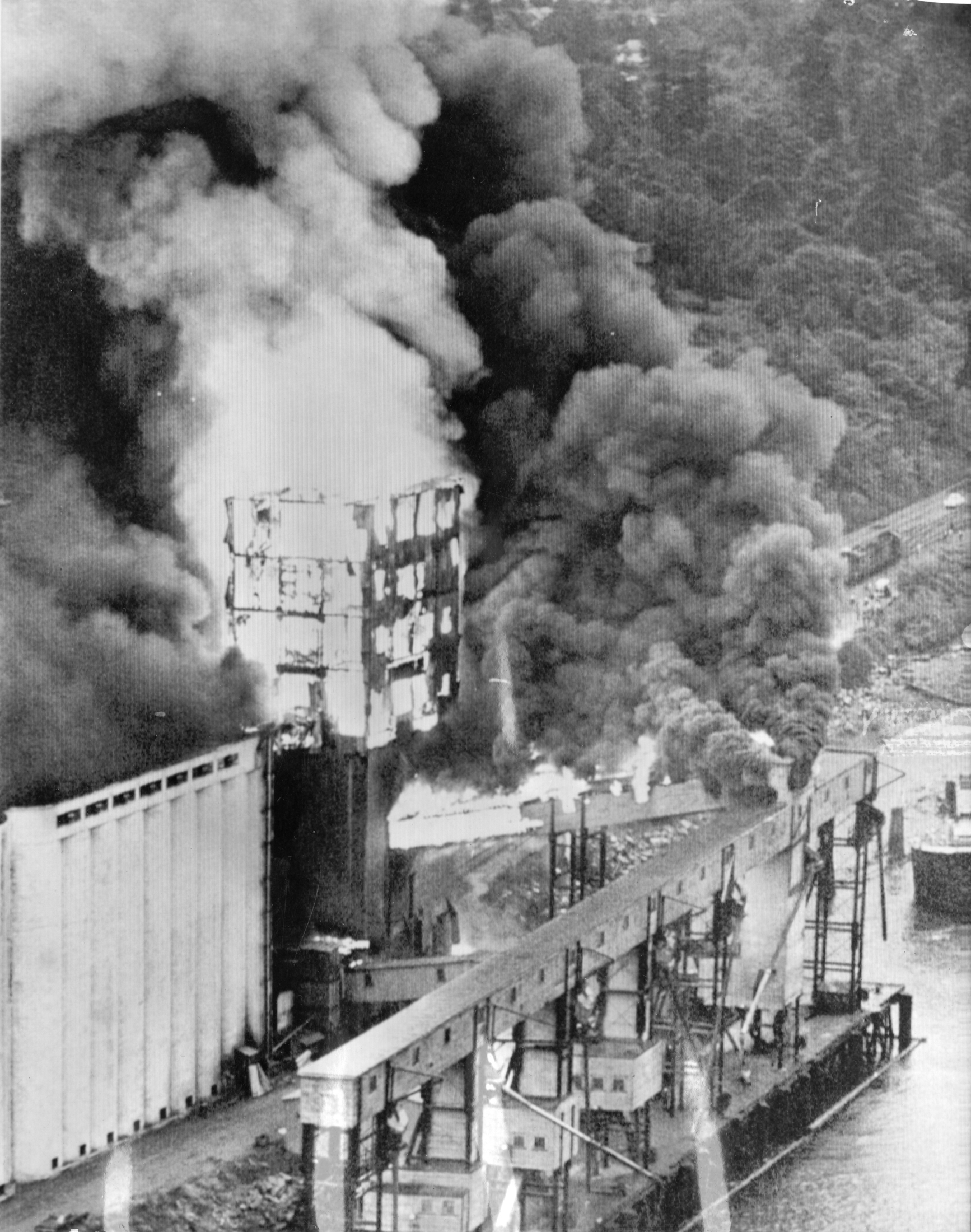 Fire at the grain elevators in 1975. Photo courtesy of the North Vancouver Museum and Archives 16021.

The following excerpt was taken from the chapter “Grain Elevators, a Fire and a Ghost Story” in Vancouver Exposed: Searching for the City’s Hidden History by Eve Lazarus. Permission to reprint this excerpt was provided by the publisher, Arsenal Pulp Press.

A little before 10 a.m. on October 3, 1975, David Samson, an inspector with the Canadian Grain Commission, was walking down the train tracks to the Burrard terminals when he saw a few of the workers he knew moving quickly away from the grain elevators.

“The side of the workhouse terminal had been blown off, and I could see the stairs going all the way up to the top of the grain elevator,” he says. “There wasn’t any real blaze at that time, but that came in the next half hour.” A conveyor belt had caught fire and ignited the explosive grain dust in the elevator. Grain dust, David tells me, is about 35 times more explosive than TNT.

Ed Hooper was standing at the top of the elevator when the fire broke out, and he grabbed a fire extinguisher and tried to put it out. David thinks the second explosion must have killed Hooper because nothing of him was ever found.

The two explosions rocked North Vancouver. Sherri Hunt-Todd clearly remembers hearing them all the way at her house in West Vancouver’s British Properties. David Ferman was on a Grade 4 field trip to the Old Spaghetti Factory restaurant in Gastown. “I remember seeing a bright yellow light through the north window,” he says. “I thought something had blown up in Burrard Inlet, or that a lightning bolt had hit a ship. Then came the sound—a muffled boom—and the yellow light became an orange fireball that blew outward towards us before quickly receding under grey clouds.”

Heather Virtue-Lapierre was watching the fire from the bluff at the bottom of St. Davids Avenue on the North Shore. “The heat was so intense that there was burning barley flying around and it left marks on our truck that was parked behind the sub-station up on Fourth Street,” she says. “The firemen eventually moved us back because they were afraid there might be another explosion. People were hosing down their roofs to keep them from catching fire.”

“The workhouse was made of wood, so eventually the whole thing caught fire,” says David. “Mel Hoey was standing on the grate when the explosion took place. He had these big heavy work boots on, and all the other clothes that he was wearing were burned right off.”

Other men came staggering out of the elevator covered in dirt and burns. Sixteen men suffered severe burns, and four later died in hospital. They were Hoey, 58; John Scully, 56; James Evoy, 42; and 28-year-old Dave Brown.

When registered nurse Liisa Rowat started her 11 p.m. shift on the fourth floor of the Fairview Pavilion at Vancouver General Hospital on the night of the explosion, she found the 18-bed burn unit in organized chaos. The corridors were full of stretchers, and extra staff had been called in so every burn patient could have his own nurse. One patient, she remembers, had burns covering 90 per cent of his body.

Dave Brown was taken to the burn unit at VGH, where, against all odds, he managed to survive for 58 days before dying of his injuries. Then, for some reason, it seems the young man decided to stick around in his room—415.

In 1989, Robert Belyk researched the story as part of his book Ghosts: True Tales of Eerie Encounters. Although 11 years had passed, Belyk was able to find two nurses and a patient who said they had experienced strange encounters with Brown’s ghost.

Staff told Belyk that they heard breathing when no one was in the room. They would feel a presence, see an unexplained shape in the room. The toilet would flush, the lights would go on and off and the room was often freezing cold. Staff said that although it was unsettling, they never felt any danger. The ghost was kind to other burn patients. He would visit critically ill patients and bring them comfort, they said.

The ghost apparently stayed around the burn unit until 1983, when staff moved to new facilities, and the building was torn down two years later.

Eve Lazarus is a North Vancouver-based journalist and author. Her passion for true crime and non-traditional history has led to nine books of non-fiction, including Murder by Milkshake (2018); Blood, Sweat, and Fear (2017); and Cold Case Vancouver (2015).  Read more stories of Hidden Vancouver.