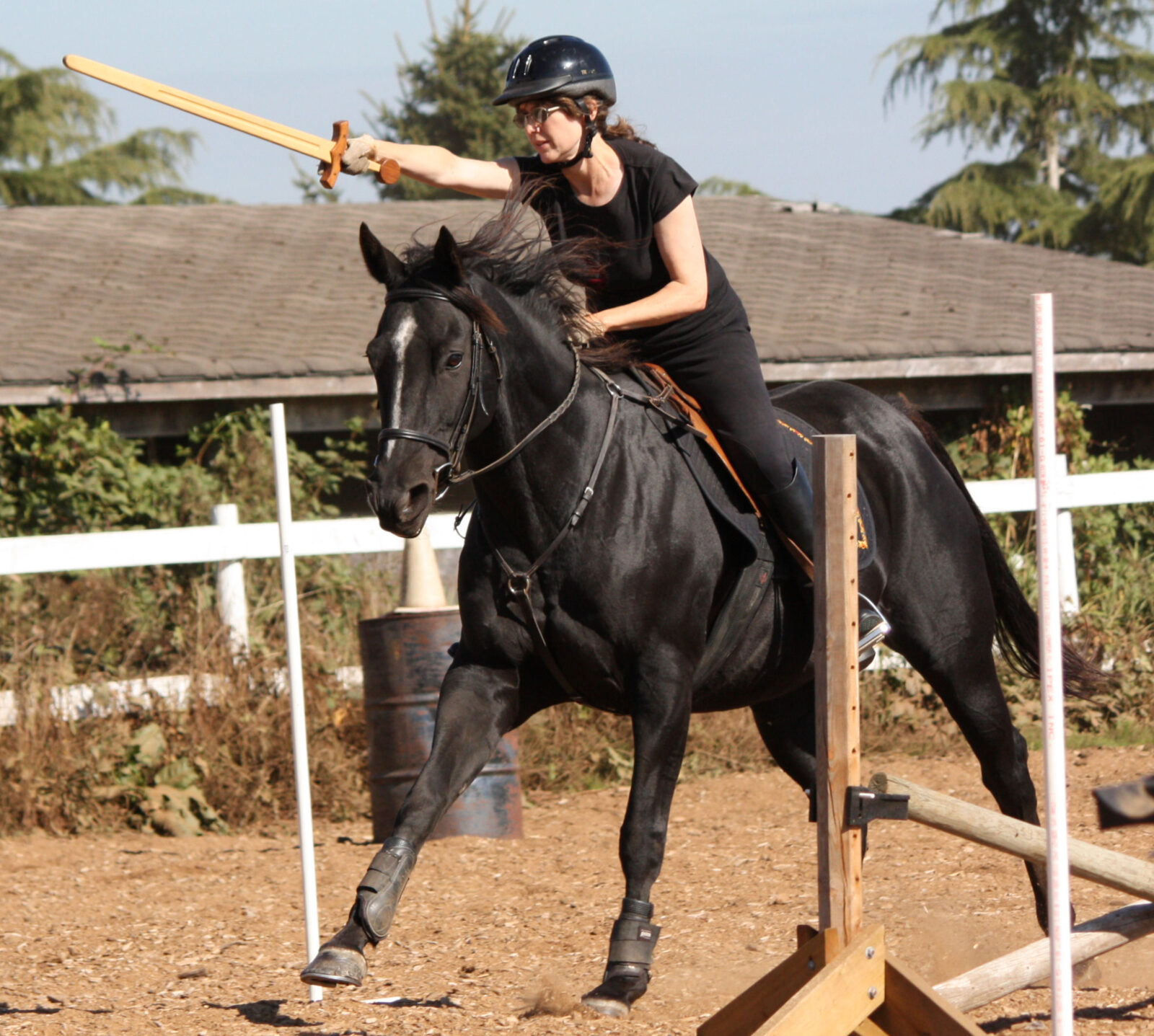 Monday through Saturday, Cornwall Ridge Farm in Langley operates like any other equestrian facility, offering riding lessons and horse boarding. On Sunday, however, visitors may hear the far-off clanging and scraping of steel.  It’s a distinct sound, seldom heard in everyday life, but any fan of fantasy TV shows like Game of Thrones, The Witcher, or Vikings will recognize it: the clash of metal swords.

The blade-wielders are members of Academie Cavallo, a school that teaches 21st-century folk the medieval skill of mounted combat—martial arts on horseback.

Behind the operation is Jennifer Landels, the owner of Cornwall Ridge Farm. She runs the school and, one could argue, is Canada’s queen of mounted combat. Landels grew up in the Interior at Ashcroft Manor so life in the saddle comes naturally to her. She says the first full sentence she ever uttered was, “I want a horse.”

At the age of eight she received her first pony. Through grade school, she raced horses around poles and barrels in equestrian competitions called gymkhanas. By the time she was a teenager, Landels was an old hand at helping local ranchers move cattle. Then came a long break from horse riding. She pursued a doctorate thesis on Arthurian romances, joined an all-girl rock band, and started writing novels. But in 2007, while doing research for a work of historical fiction, The Shepherdess (currently being serialized in Pulp Literature where Landels is managing editor), Landels wanted to find something out about 17th-century rapiers. “I googled it, as you do,” she recalls. “First thing that came up was Academie Duello, and I was like, ‘There’s a school in Vancouver, and I can learn this? Like, for real?’” 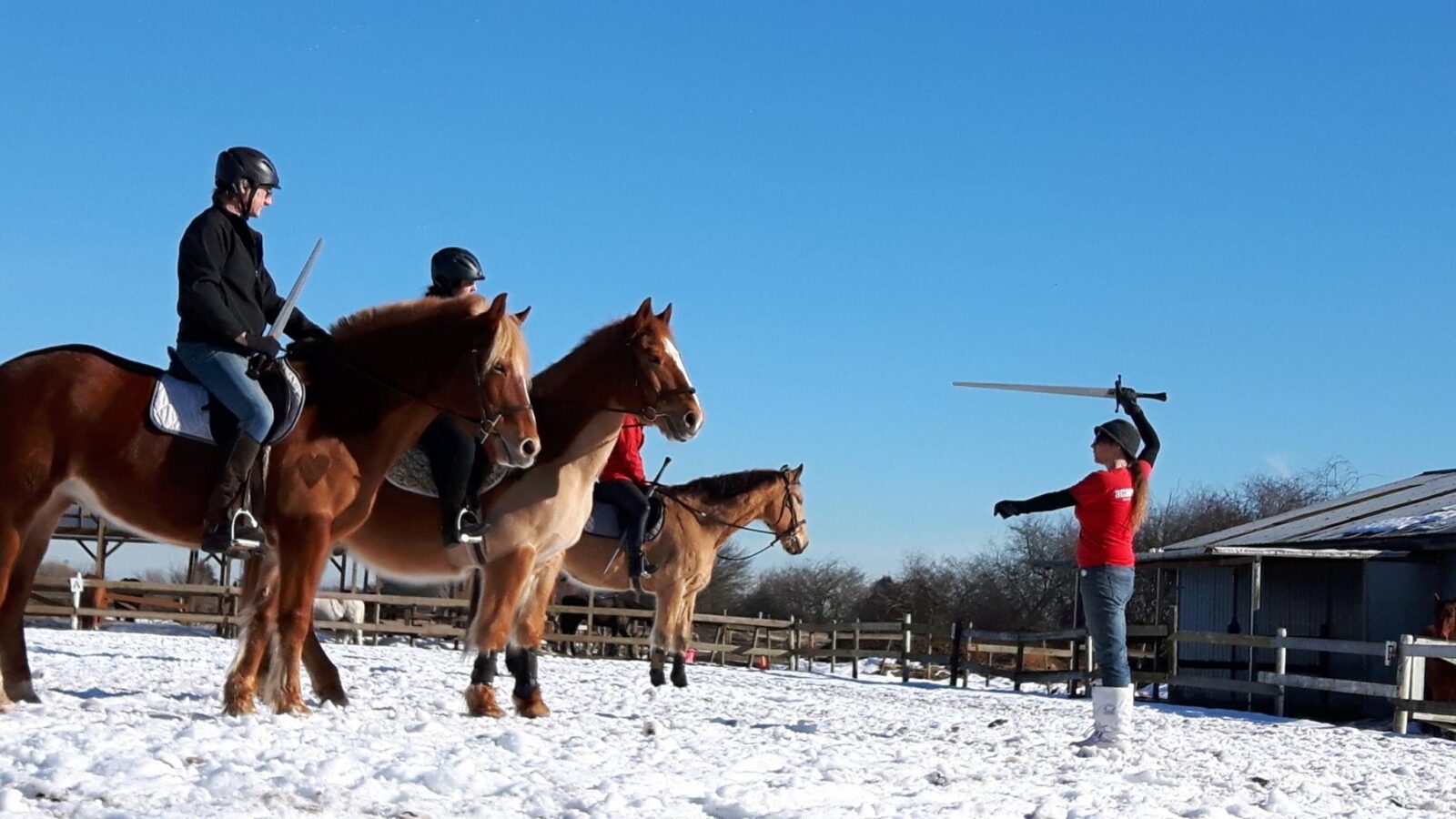 A mastery lesson led by Landels in the snow.

She took an eight-week course at the school run by Devon Boorman and found herself plunged into the world of historical European martial arts, or HEMA. In this sport, participants train in a wide range of European weapons, including rapier, longsword, and spear. Unlike in fencing, the weapons have the weight and stiffness of real fighting blades. Though the edges and points of the weapons are blunted, the strikes taught are designed to disable or kill instead of merely scoring touch points.

In 2010, after a few years of studying and teaching rapier at Academie Duello, Landels proposed to Boorman that the school offer a mounted program. “I put together the riding and horsemanship curriculum, and he and one of the other instructors put together the swordplay curriculum,” she explains.

The program is built on an illustrated medieval how-to manuscript by Fiore Furlan dei Liberi da Premariacco, titled Il Fior di Battaglia (The Flower of Battle). Considered the greatest fencing master of the 1300s, Fiore developed a complete fighting system that covered everything from unarmed combat to daggers to staves to polearms. In his manual, the skills progress chapter by chapter, building upon each other, and at the very top is mounted combat. 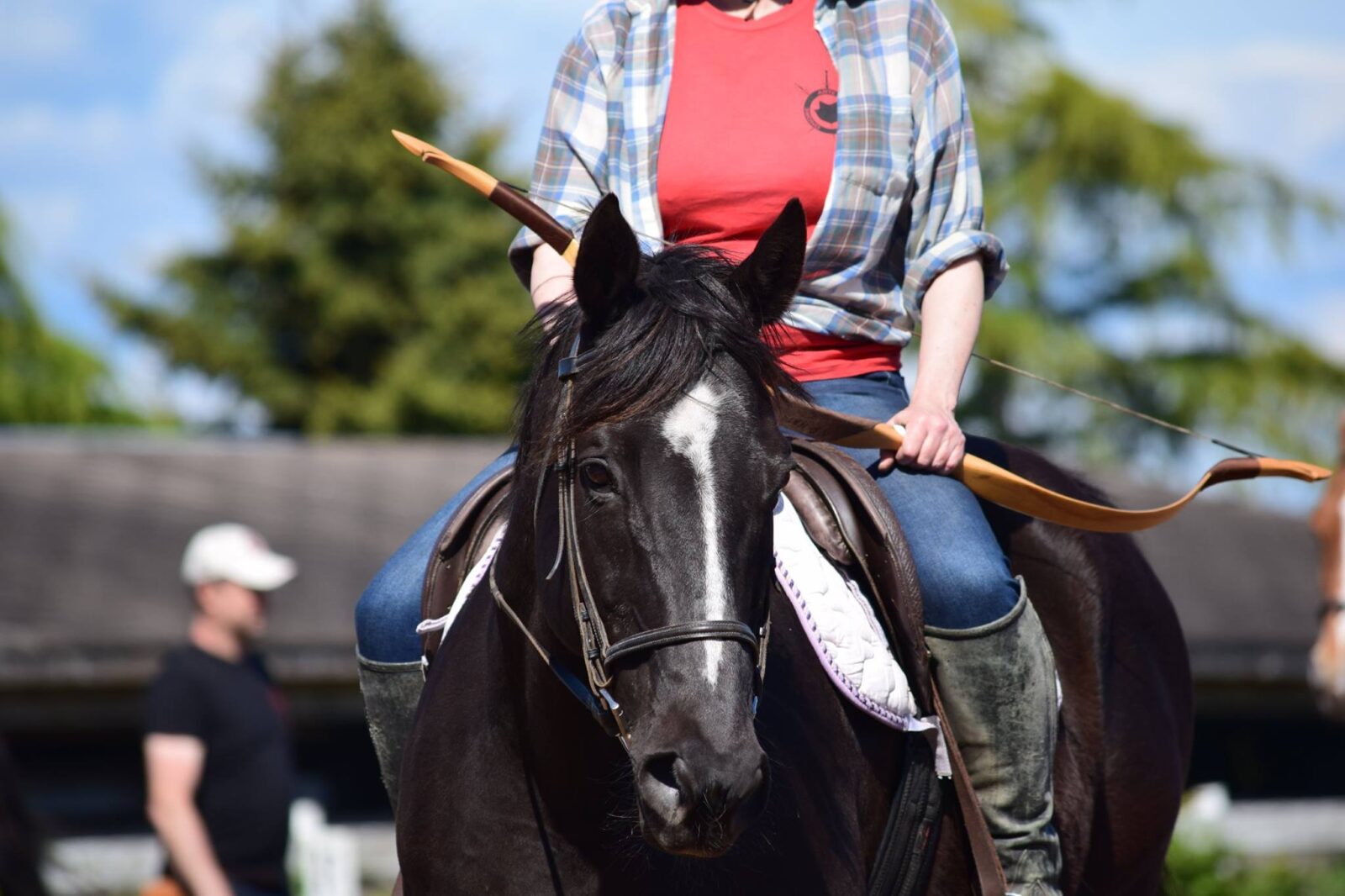 Steel weapons are used only in unmounted drills. Landels says, “Horses don’t get to sign a waiver.” When mounted, students spar instead with synthetic polymer swords. Another concession to safety is that riders wear hockey helmets. “We need helmets that have some fall protection built in,” Landels says. “If you hit somebody in the riding helmet with your sword, they’re going to have to throw their riding helmet out, whereas hockey helmets are designed to take those hits.”

And the blows do come. The highlight of the academy’s year arrives on a weekend in September with Carosella. “It’s a three-day symposium. Two days of workshops and a day of tournament,” Landels says. “There are games, swordplay, and spears.”

The Carosella headline event is the Green Spur Tournament. Two qualified riders face each other armed with nylon longswords within a 15-by-15-metre square. When the marshal yells “fight,” the pair have three 30-second bouts to score hits. Not only are the fighters bringing 500-year-old Fiore illustrations to life, it’s also not a bad way to spend a Sunday afternoon.

“Some days, I’m amazed I was able to create this out of thin air,” Landels says. “I’m happy to keep these arts alive. Not that I hope that anyone ever has to go to battle on horseback ever, ever again. The fact that we can replicate them physically means that it’s a part of history we can experience more vividly, more intensely. It’s not just some abstraction on paper, which most history is.”