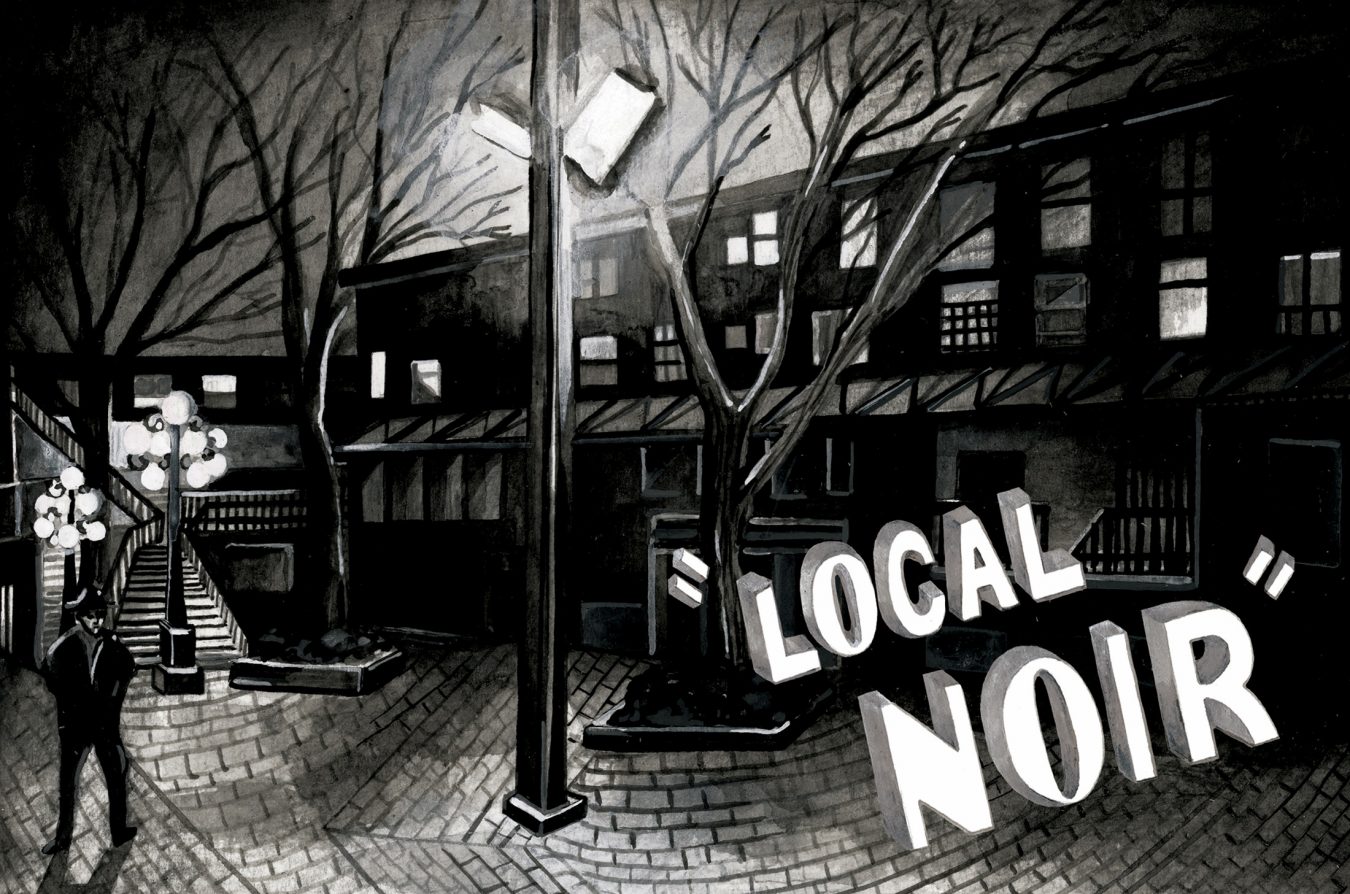 Vancouver writer Sam Wiebe likes to describe crime fiction as the ultimate anti-travel guide. Instead of taking readers on a tour of charming local hot spots, it delivers them to the dark underbelly of a city, inviting them to follow detectives down sketchy streets and back alleys normally hidden from tourist view. According to Wiebe, if you want to really know a city, read its murder mysteries.

The dark side of his hometown is the subject of a new collection of short fiction that he edited for Akashic Press. “You might wonder what shadows could exist in Vancouver, rain-spattered jewel of the Pacific Northwest,” he writes in the introduction to Vancouver Noir, part of the much-lauded global Noir series. “Nestled between the U.S. border and the Coast Mountains, the city’s postcard charms are familiar, even to those who’ve never been here, thanks to the films and TV shows shot in Hollywood North…Vancouver is the so-called City of Glass. A nice place, in any case, much too nice for noir.”

Picture this West Coast destination and minds will likely be flooded with social media snapshots of hikers on mountain peaks, paddlers on sparkling ocean waters, joggers on the Seawall, and yogis in the park—not to mention world-class cuisine and coffee, captioned with aspirational self-help spirituality and energetic Silicon Valley exceptionalism. But as Wiebe points out in his introduction, just below this glossy surface lurks a very different reality: an opioid crisis, missing and murdered women, shady real estate deals, and extensive urban blight. This state of affairs is something he says his generation of scribes is working through—and many have found crime fiction as the ideal genre in which to do so. As such, Terminal City is now a starring character in a series of highly cinematic psychological thrillers. 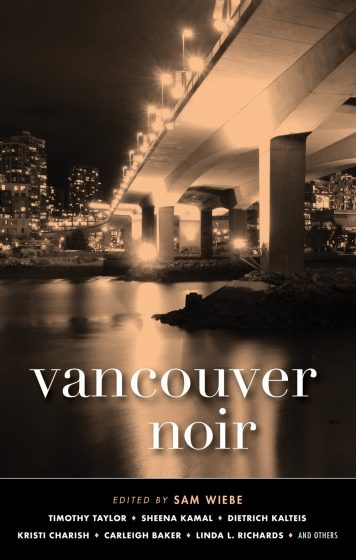 “Crime fiction is such a great balance between entertainment, telling stories, and then also social commentary,” says Wiebe, a former Vancouver Public Library writer-in-residence. “There’s not a lot of other genres that blend those things. It’s a really good way to talk about the place you live, and things that are going on—and make that stuff engaging for an audience.”

He says authors including Laurence Gough and former prosecutor William Deverell set the stage decades ago, but local crime fiction experienced a resurgence around 2013, with outings from the likes of Dietrich Kalteis, along with Wiebe’s own Dave Wakeland series about a brash private investigator. In the years since, the genre has exploded, with a wave of high-octane, plot-driven, Vancouver-based novels winning critical praise, from Sheena Kamal’s The Lost Ones to On the Up by Shilo Jones. Former chief justice Beverley McLachlin is even in on the action, making the leap from the Supreme Court bench to bookshelves with her own debut Full Disclosure, which is also set here.

“I think it’s a really interesting scene right now,” Wiebe says via phone. Vancouver Noir celebrates this idea with chilling short stories from Linda L. Richards (an assassin falls for her target, against the stunning backdrop of English Bay); Robin Spano (a picture-perfect West Vancouver yoga mom drives a frenemy from her child’s playgroup to commit violence); the aforementioned Kamal (a disgruntled downtown drone extorts her corrupt, white-collar criminal boss); and Carleigh Baker (a woman in an abusive relationship camps out in abandoned houses in South Cambie and discovers a body). The theme of real estate runs throughout. “The housing crisis plays such a big role in Vancouver Noir,” Wiebe says, “I was joking, ‘We should call it Housing Noir.’” 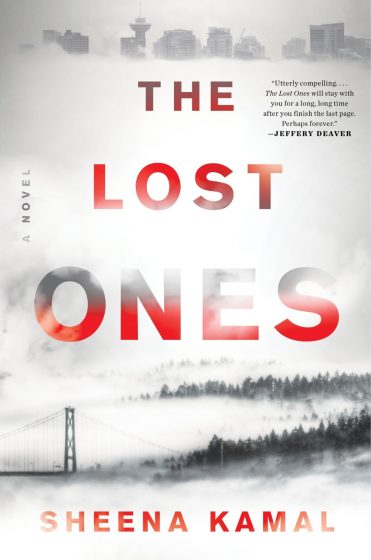 The Lost Ones, published by HarperCollins.

Kamal, who recently moved back to Toronto after four years in Vancouver, acknowledges that she’s been inspired by fellow local crime writers, especially Wiebe. “His latest, Cut You Down, takes the pulse of the city in a wonderful, eye-opening way,” she says. “It’s hard-boiled, P.I. crime fiction, but it’s got a big heart to it.” She says she loves thrillers and crime fiction in general because “there is nothing this genre can’t do. It can go into the personal, and explore domestic mysteries, but it can also be very political.” Especially in Vancouver.

Plus, crime fiction gets to the point, she says, forcing writers to be both engaging and concise. “You can’t really get stuck in being too self-indulgent with your prose,” Kamal explains on a call. “I love that. There’s these characters, and a central mystery, and now you’ve got to make it move.” For her, Vancouver is the ideal muse because it is so dynamic. “There’s so many elements to this city that I find fascinating,” she says. “When people think of Vancouver, they don’t think of the Downtown Eastside, and the poverty, and the income inequality. They think of the beautiful mountains and the ocean and the forest. But there is a living, breathing, pulsing city, and I’m inspired to write it because it’s such an interesting place.” Like so many other cosmopolitan destinations, this city is more than meets the eye.

All told, there can be no doubt that local crime fiction is having a moment, carving out a new, and very different, space within CanLit. “Thinking about Canada, Canada’s literary scene is more ephemeral and philosophical,” Wiebe reflects. “And that can be great.” Still, he thinks a lot of novels have lost the “social aspect” of writing about what is going on with real people residing in Canadian cities today. “Whereas with crime fiction, I think a lot of authors are using it as a venue to specifically talk about those sorts of issues,” he continues. “So, it’s less about the beautiful wordplay and internal thought processes of a middle-aged college professor. And it’s more about what people like you or I are going through living here.” These stories may have dark twists and turns, but then again, so does reality.

From the Archives: This story from our Winter 2018 issue was originally published on January 2, 2019. Read more from our Community section.