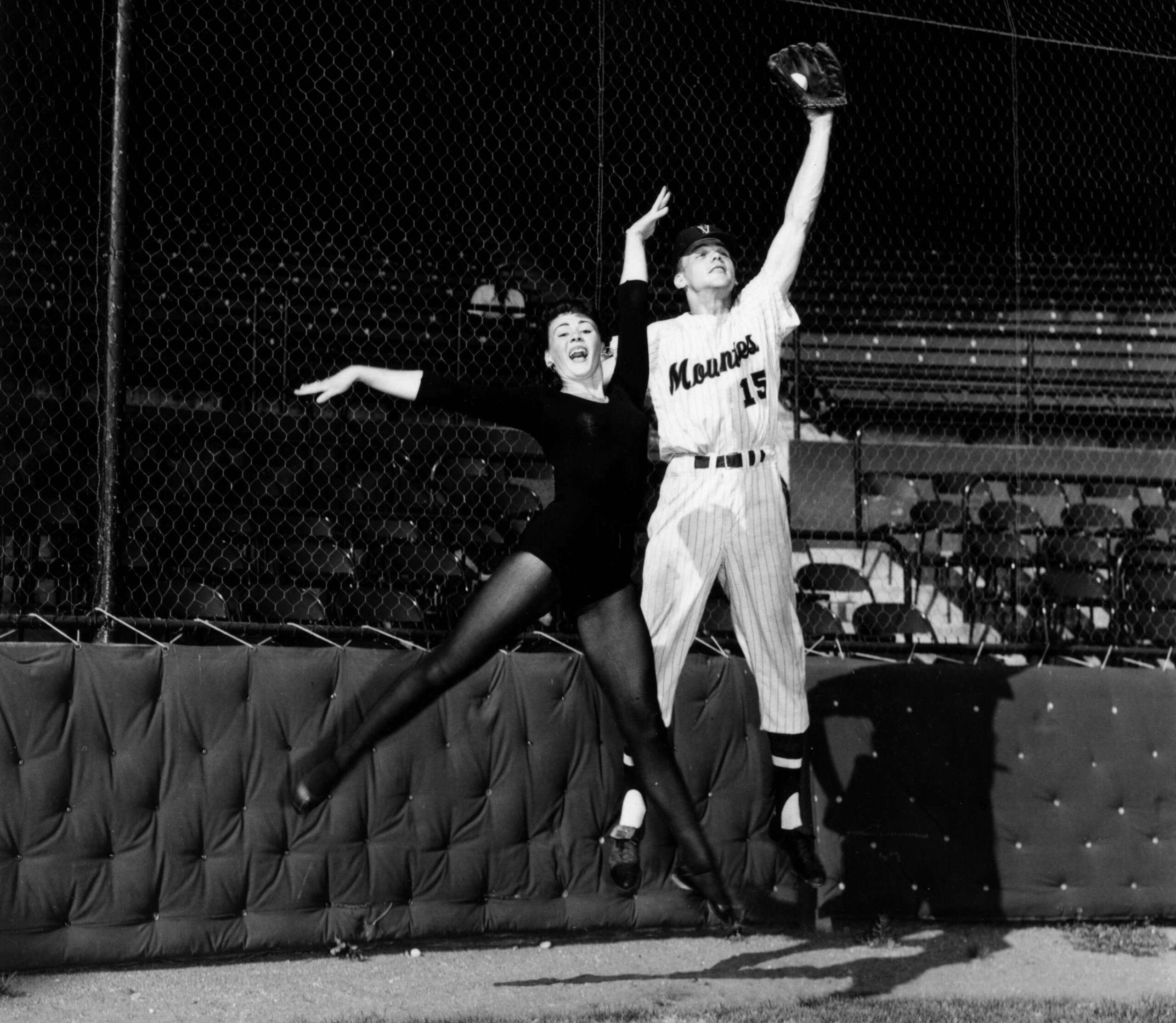 For more than half a century, the photographs remained unseen in a photo album, half a dozen in a vast collection held by impresario Hugh Pickett. The black-and-white images depict balletic interpretations of classic baseball poses: a catcher’s crouch, a pitcher’s windup, a first baseman’s stretch. The ballerinas and the baseball players are in uniform, the dancers in black tights, the athletes in pinstriped flannels.

What was the circumstance? Who were the dancers and who were the players? How did this odd but beautiful pairing of two disciplines come about?

Hugh Frank Digby Pickett grew up in the 1920s in the leafy Vancouver neighbourhood of Marpole, where his father, a steamship agent, had built a home. An indifferent student, he proved a dedicated scholar of Hollywood films, traveling by streetcar to the movie palaces downtown. Decades later, he would save one of those theatres, the Orpheum, from the wrecking ball by recruiting Jack Benny for a fundraiser.

Young Hugh got his first job at the Colonial Theatre, where one of his early tasks was to destroy an accumulation of posters, lobby cards, and promotional photographs. The lad later rued destroying what would have been a valuable collection, and he would in future years become a dedicated collector himself.

In later years, Pickett threw away nothing. That’s how the baseball ballet photographs got saved.

Pickett spent the war as secretary to a brigadier general. He attended the Academy Awards ceremony in 1942 wearing a Canadian Army uniform and later squired the actress Susan Hayward around Vancouver during a tour to promote the sale of war bonds.

After the war, Pickett became a press agent before co-owning Famous Artists, which sponsored appearances by ballets and theatre companies. He brought hundreds of famous performers to Vancouver, helping to thrust a port city onto the world stage.

The busy impresario served as manager to Marlene Dietrich, while also playing a variety of backstage roles for Theatre Under the Stars, also known as TUTS, which produces musicals outdoors each summer at Malkin Bowl in Stanley Park.

Pickett kept everything: tickets, programs, photographs, posters, newspaper clippings. The walls of his home were filled with framed photographs of the stars he called friends. File cabinets in the basement were filled to bursting.

Pickett died in 2006, by which time he had been inducted into the BC Entertainment Hall of Fame and had a star placed in the sidewalk outside the Orpheum on Granville Street. (Yes, the hall was yet another of his creations.) The City of Vancouver Archives quietly let it be known they were interested in Pickett’s collection. After about a decade, Gordon Boyd, who was Pickett’s life partner, agreed to donate materials.

The Friends of the Vancouver City Archives held a gala in the impresario’s name at the Sylvia Hotel, one of his favourite hangouts (the dress code was “cool”; Pickett was famous for saying “tuxedos are for waiters.” He preferred ascots to ties). The money raised covered some of the cost for the archives to process and digitize the collection, which was made accessible to the public in 2018.

A year later, about 700 photographs from the collection were made available online.

Among them were six images of ballerinas and baseball players.

The dancers were identified by name, though the ball players were anonymous. The location, the date, and the circumstances were not described.

After some sleuthing, I am able to name the athletes and fill in the missing details.

Happily, baseball players wear numbers. The players are wearing the uniform of the Vancouver Mounties, a minor-league team that operated from 1956–62 and from 1965– 69. Since home uniforms usually carry the team’s nickname, while road uniforms feature the city’s name, we can surmise the photos were taken in Vancouver. The team played at what was then known as Capilano Stadium, which is today’s Nat Bailey.

So why ballerinas at the ballpark?

A look through Theatre Under the Stars’ productions shows the troupe performed Damn Yankees in the summer of 1958. The musical is a modern retelling of the Faust legend with a baseball background.

So this is how the photo shoot came about. To promote ticket sales, several dancers posed with the baseball players one summer afternoon, likely July 18, 1958.

We know this because the following day, The Province newspaper published on the sports page a staged photograph of James Hurst, the handsome leading man of Damn Yankees, sliding into base while dancer Margaret Grant leaps high into the air to make an umpire’s out call. (Hurst’s father, Don, had been a slugging first baseman with the Philadelphia Phillies in the 1930s.) The posed image is hackneyed in the style favoured by newspaper lensmen of the era.

The publicity shots for TUTS are credited to Artray Limited, a photography company operated by Art Jones. The remarkable images capture the athletic nature of ballet and the artistic side of baseball. 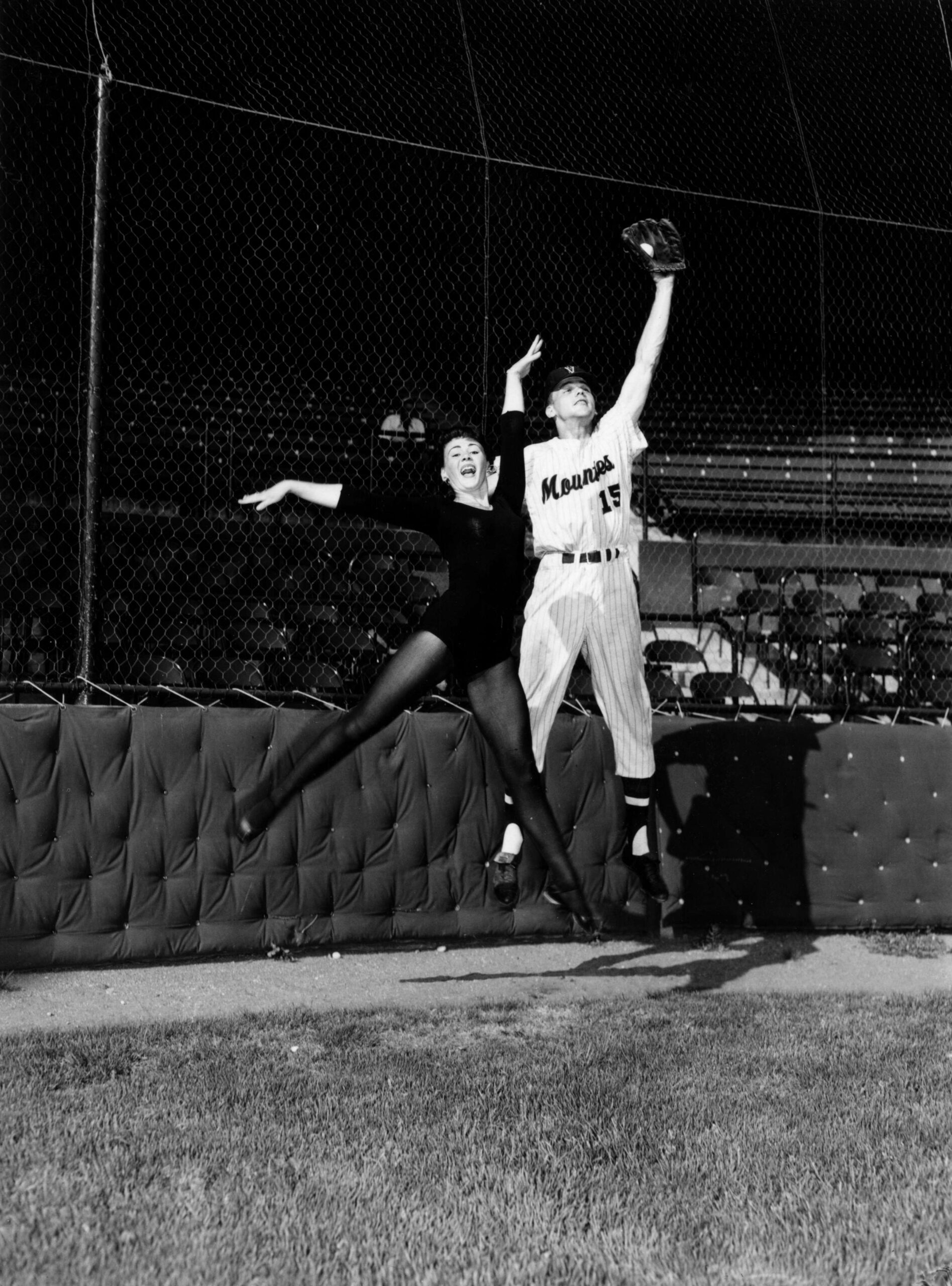 Outfielders leap at the outfield wall to catch a ball otherwise destined to be a home run. Barry Shetrone only got to play 31 games in the outfield for his hometown Baltimore Orioles in the American League, but he had a long career in the minor leagues, including two seasons with the Mounties.

He is paired here with dancer Marina (née Katronis) Ross, who is performing a sauté arabesque.

“It was a difficult shot to get,” she said recently from her home in Winnipeg. “I had to run into it. He just bent his knees and jumped.”

Ross, who was born in Vancouver to parents of Polish and Greek ancestry, joined the Royal Winnipeg Ballet at age 14, later becoming principal dancer. She was a full-time ballerina who took summer roles with TUTS. She married Jack M. Ross, a prominent Manitoba architect with whom she had two daughters. After retiring as a ballerina, she worked with Canadian figure skaters. 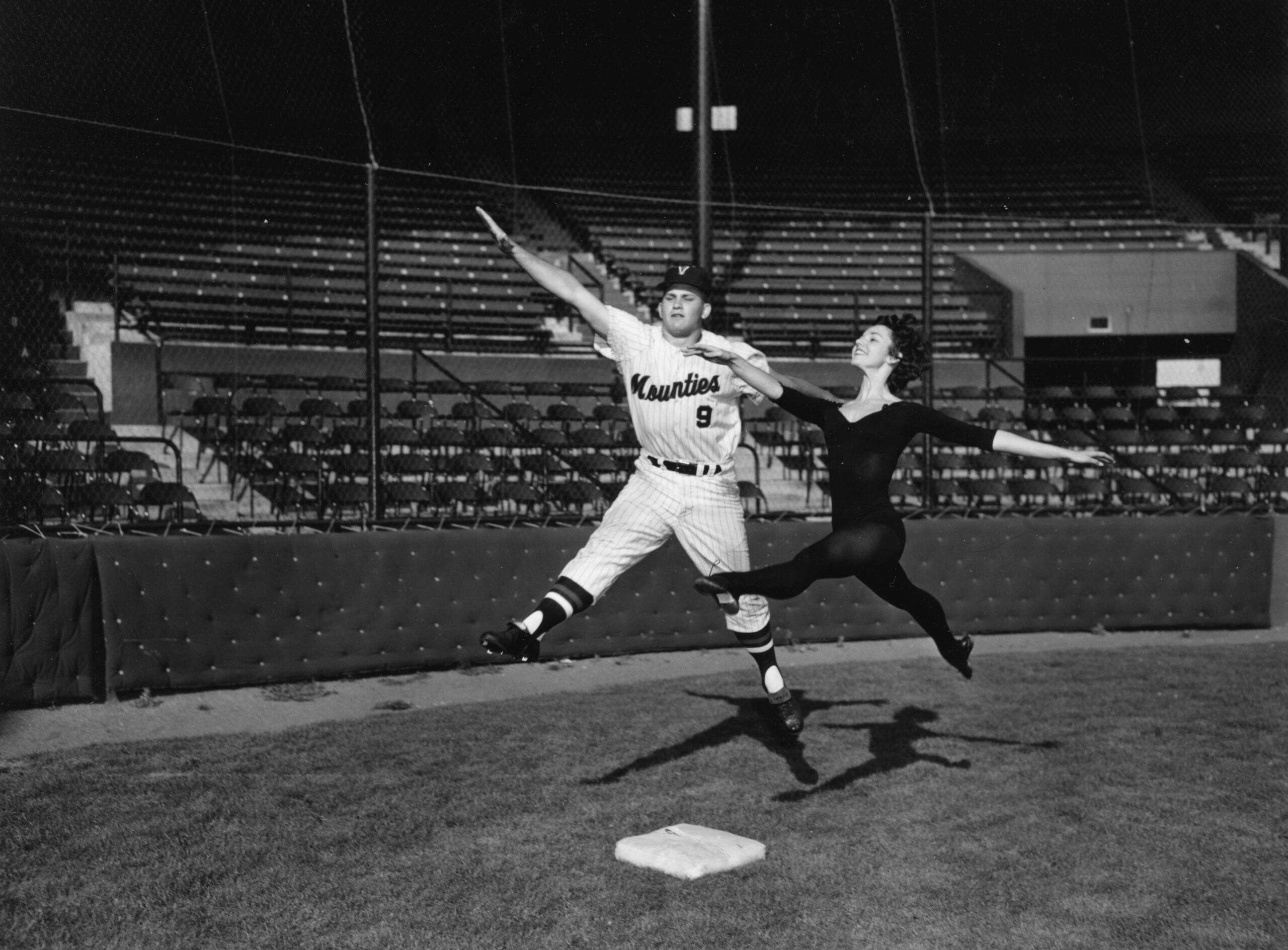 Heather Skerl performs a grand jeté. Skerl and her family survived four years of imprisonment in the Philippines by Japanese occupiers during the Second World War. Her father was a geological engineer for mining companies who died following a helicopter crash in northern B.C. in 1969. She performed in several TUTS musicals in the late 1950s.

Ray (Buddy) Barker, who was from West Virginia, spent parts of four seasons in the major leagues, including 176 games with the New York Yankees. He played first base for the Mounties, hitting 15 home runs in 1958. 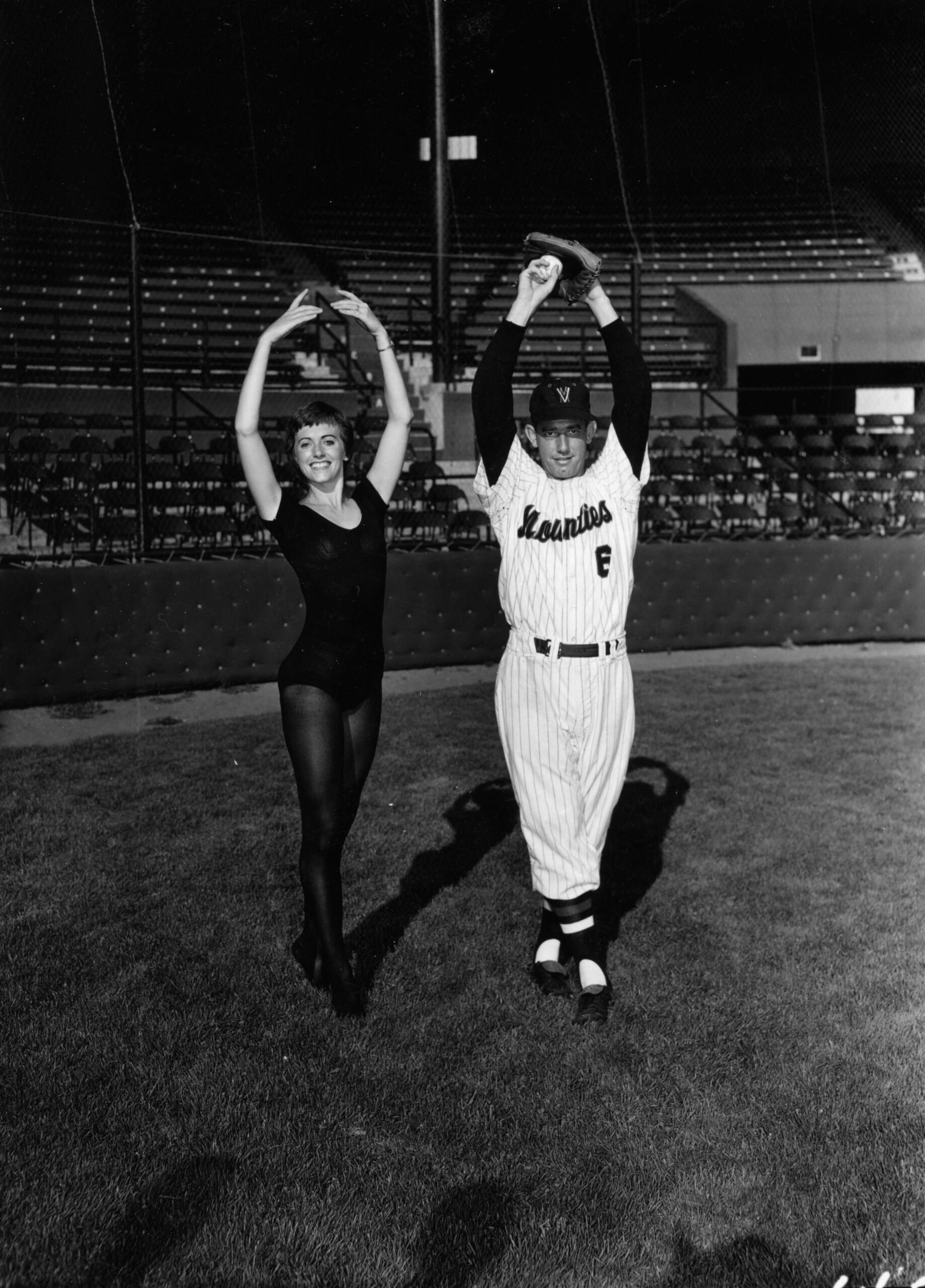 The pitcher’s windup is an idiosyncratic routine sometimes mocked by comedians. George Bamberger, demonstrating here an over-the-head windup, was the best pitcher to wear the Mounties’ pinstripes. Popular with teammates and fans in Vancouver, he went on to become manager of a power-hitting Milwaukee Brewers squad known as Bambi’s Bombers.

Shelagh MacDonald was the wife of John MacDonald, a regular in TUTS shows throughout the 1950s. Her bras en couronne mimics the windup. 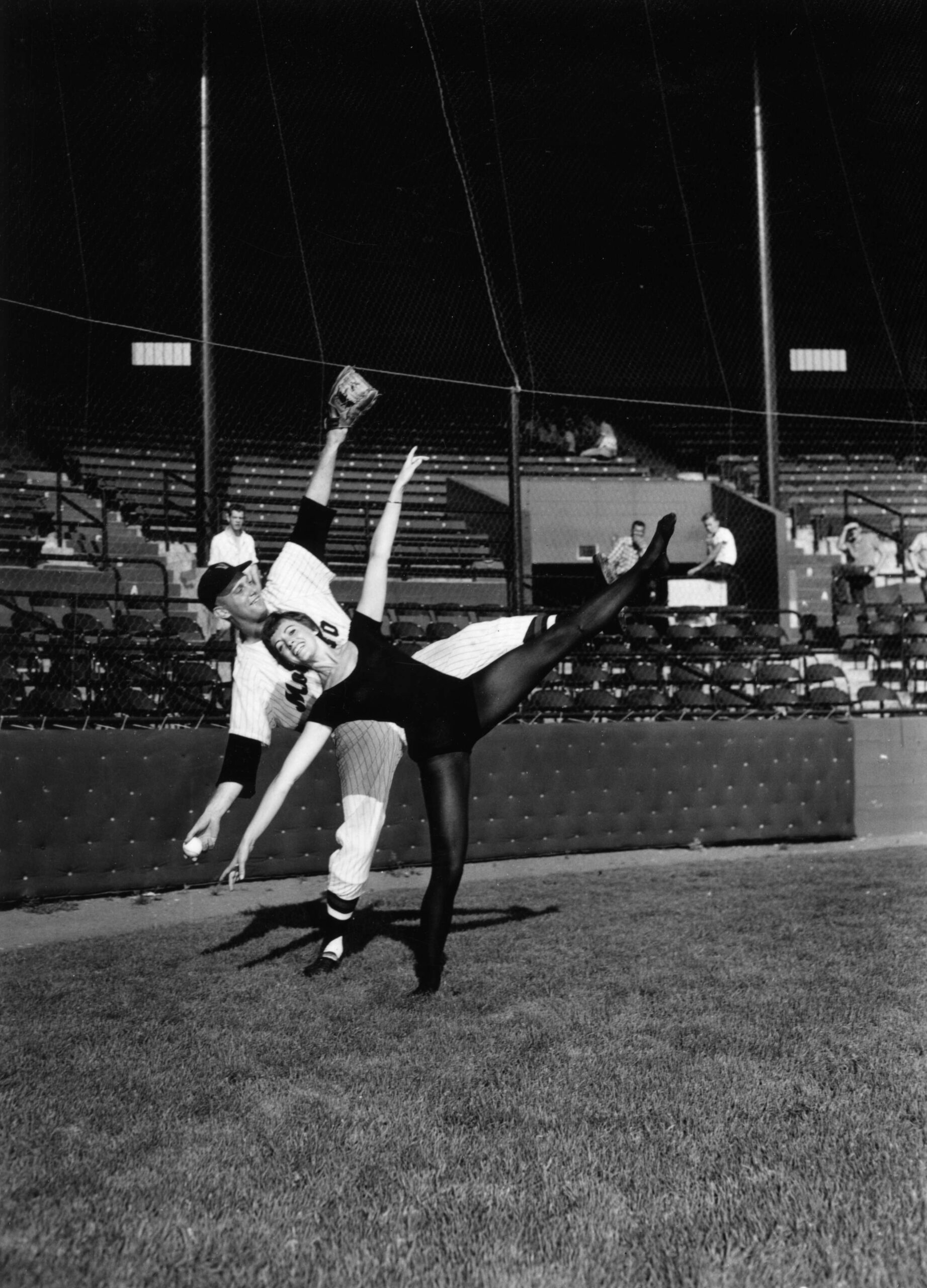 The high-stepping pitcher’s windup is shown here by Joe Frazier, an outfielder and third baseman from Liberty, North Carolina. Frazier appeared in one game for the Mounties as a pitcher in 1958. That’s Shelagh MacDonald imitating him. 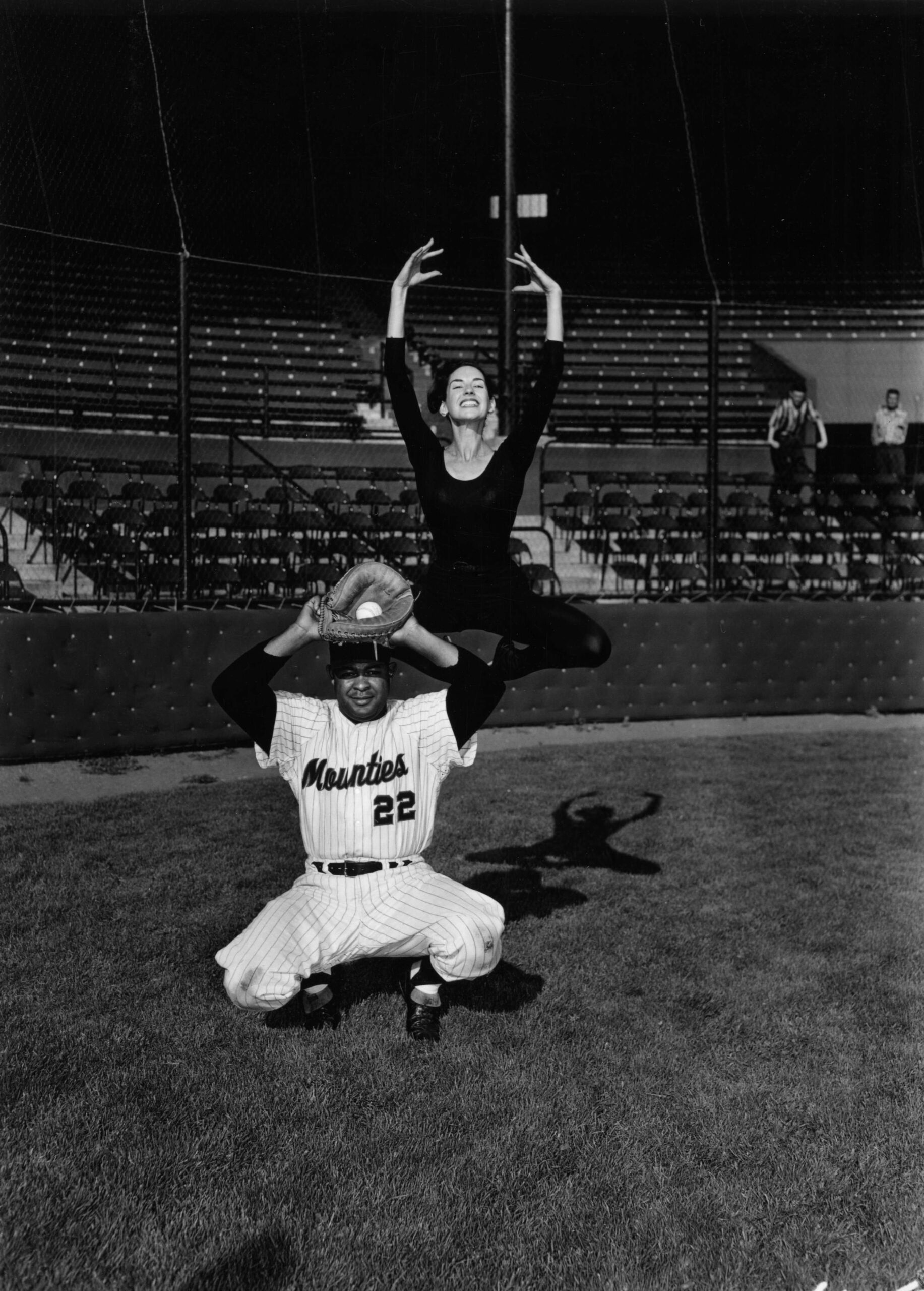 The catcher’s crouch is re-created as a dance move by Margaret Grant. She married fellow theatre lover Bob Sibson less than a year after this photograph was taken. She died of lung cancer at age 59 in 1997.

Charlie White began his baseball career in the Negro Leagues. He played in 62 games with the major-league Milwaukee Braves before winding up in Vancouver for two seasons of a long, minor-league career. He was a fan favourite. 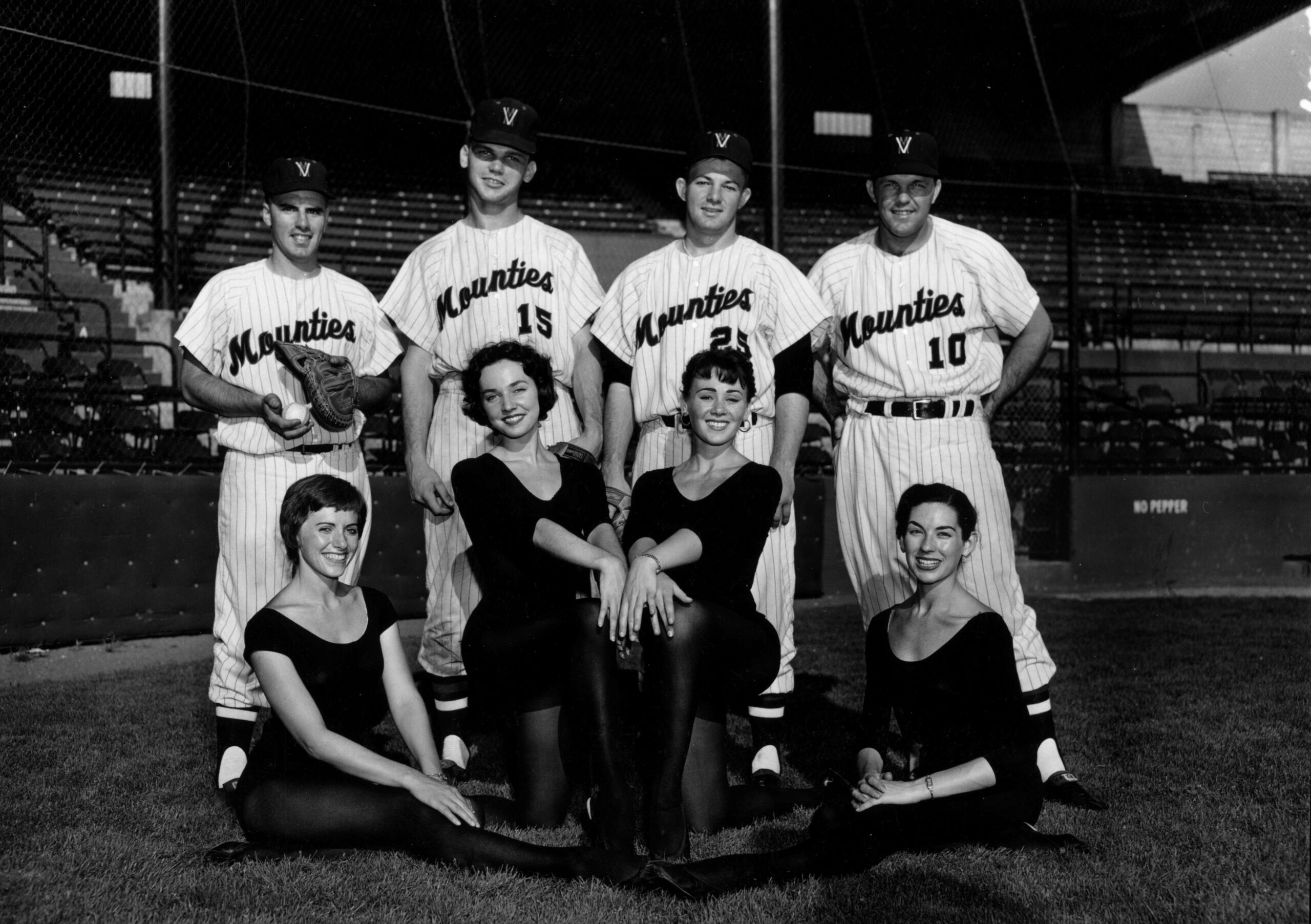 The dancers also appeared between innings of a doubleheader on July 27, 1958, between the Mounties and the Salt Lake Bees alongside leading lady Sally Forrest, a Hollywood movie star. The previous day’s special attraction at the ballpark had been rubber-limbed Max Patkin, billed as “baseball’s funniest clown.”

The end of a show’s run usually only leaves memories and maybe a ticket stub and program. In this rare instance, Damn Yankees left us these forgotten souvenirs of athleticism married to artistry.