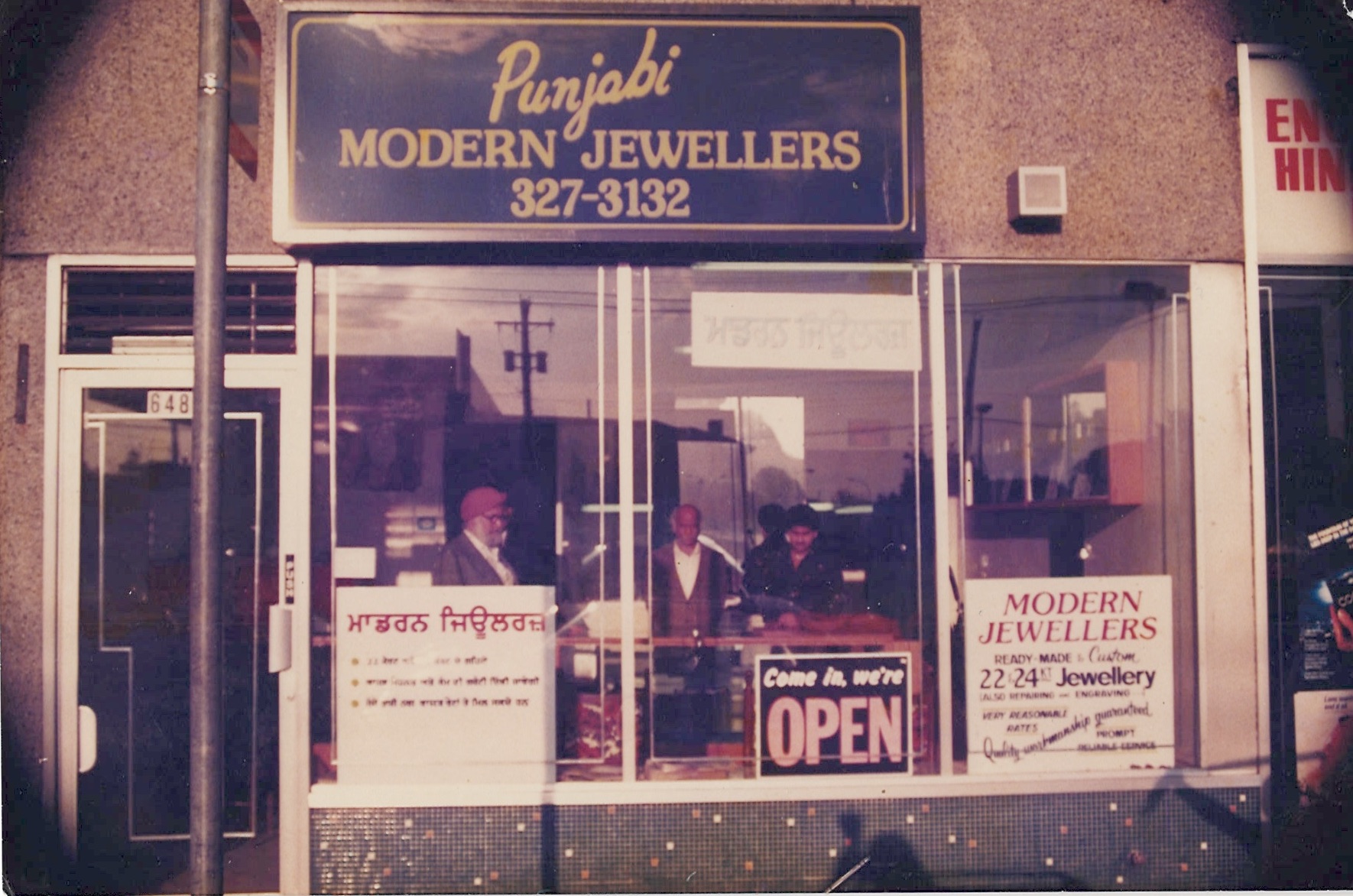 Mrignesh Nanda opened his first jewellery store in the Punjabi Market in 1986. Photo courtesy of the Nanda family.

When Sucha Singh Claire immigrated to Vancouver in October 1969, he arrived with a plan. He was going to start his own business. Before his move to Vancouver, where his relatives lived, he’d lived in Coventry, England, for seven years. He had noticed small Indian stores opening up to serve a growing Indian immigrant population in British cities. He figured there might be a similar demand in his new home.

Searching for the perfect spot for his shop in South Vancouver, Singh Claire settled on 6576 Main Street. It was a short walk away from the new gurdwara then under construction called the Ross Street Sikh Temple. Designed by celebrated Canadian architect Arthur Erickson, the gurdwara—home to the Khalsa Diwan Society—opened in April 1970 to serve a growing Sikh population. Singh Claire opened Shan Sarees and Drapery on May 31, 1970.

“I thought that after going to the gurdwara, the ladies would be interested in coming to my fabric store to purchase some suits and saris. I was right,” says Singh Claire, now 83. “But I had no idea that my shop would eventually lead to something like the Punjabi Market.” 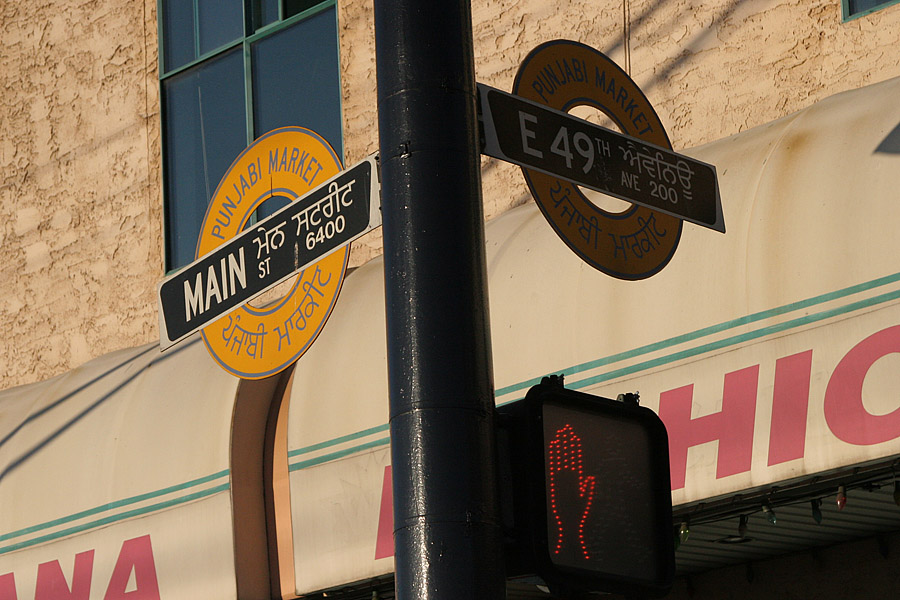 In recent years, the Punjabi Market has lost some of its lustre. An increasing number of South Asians moving to suburbs such as Surrey and new ethnic enclaves springing up in strip malls to serve the growing community have divided the market. However, a new group called the Punjabi Market Regeneration Collective hopes to revitalize the Punjabi Market by honouring its history, beautifying its blocks, and creating a cultural hub to promote both business and arts.

Within six months of Singh Claire opening his store on Main Street in 1970, an Indian jewellery store and an Indian grocery store launched farther down the road. As more people started shopping, more shops started opening on the street. In 1993, after Singh Claire and a group of other business owners lobbied Vancouver City Hall and then-mayor Gordon Campbell, the neighbourhood came to be officially known as Punjabi Market. Street signs in the Punjabi language script Gurmukhi were installed to mark the site. 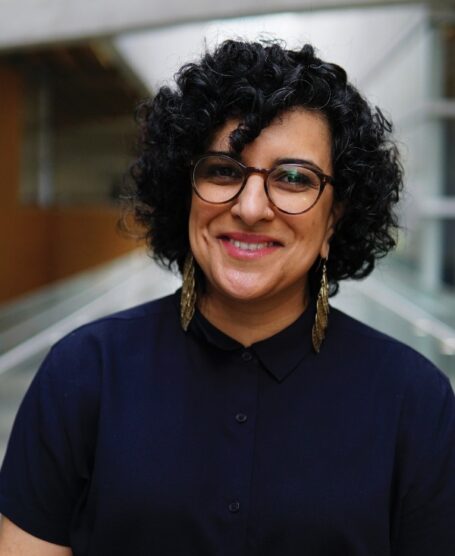 For Jag Nagra, 36, who serves as creative director of the Punjabi Market Regeneration Collective, going to the market was an all-day affair. She grew up in Maple Ridge, and there were no South Asian stores nearby.

“Punjabi Market was where we went for Indian sweets, Indian clothes, and Indian jewellery. It’s funny now when I go to the market as an adult. I see it’s, like, a three-block radius,” she says. “But back then, it seemed like the market went on forever. I remember going back in my early twenties and thinking, ‘Wait! Where did the rest of the market go?”

Even though her memories of the market are jumbled together, those childhood impressions of following her parents from store to store are still strong, she adds. When she steps into a fabric shop or grocery store in the Punjabi Market on her own today, she’s transported back.

“The smells bring me back instantly to my childhood. The smell of fabric and incense burning in the fabric store. They were always so colourful. And we always went to Himalaya Restaurant to have chole bhature. Even now, I crave their pickled carrots. It was such a community-oriented feeling back then. It was a bustling neighbourhood.”

Gulzar Nanda clearly remembers how busy the Punjabi Market used to be in its heyday. Nanda, who is chair of the revitalization collective, is a child of the market. His father, Mrignesh Nanda, had emigrated from India to Canada in 1984. A jeweller back home, Mrignesh quickly found work in the oldest jewellery shop in the Punjabi Market, Bharti Art Jewellers. Within a year, he had saved up enough money to open a small jewellery boutique.

“This is where I grew up,” says Nanda, 30, who now manages Hi-Class Jewellers, the second store his father started (after the first was destroyed by a fire in August 1988). “My school was around the corner. After school I spent time in the Punjabi Market. And now it’s a space that employs me. I’m not just an advocate for the market. This is also my day-to-day profession.” 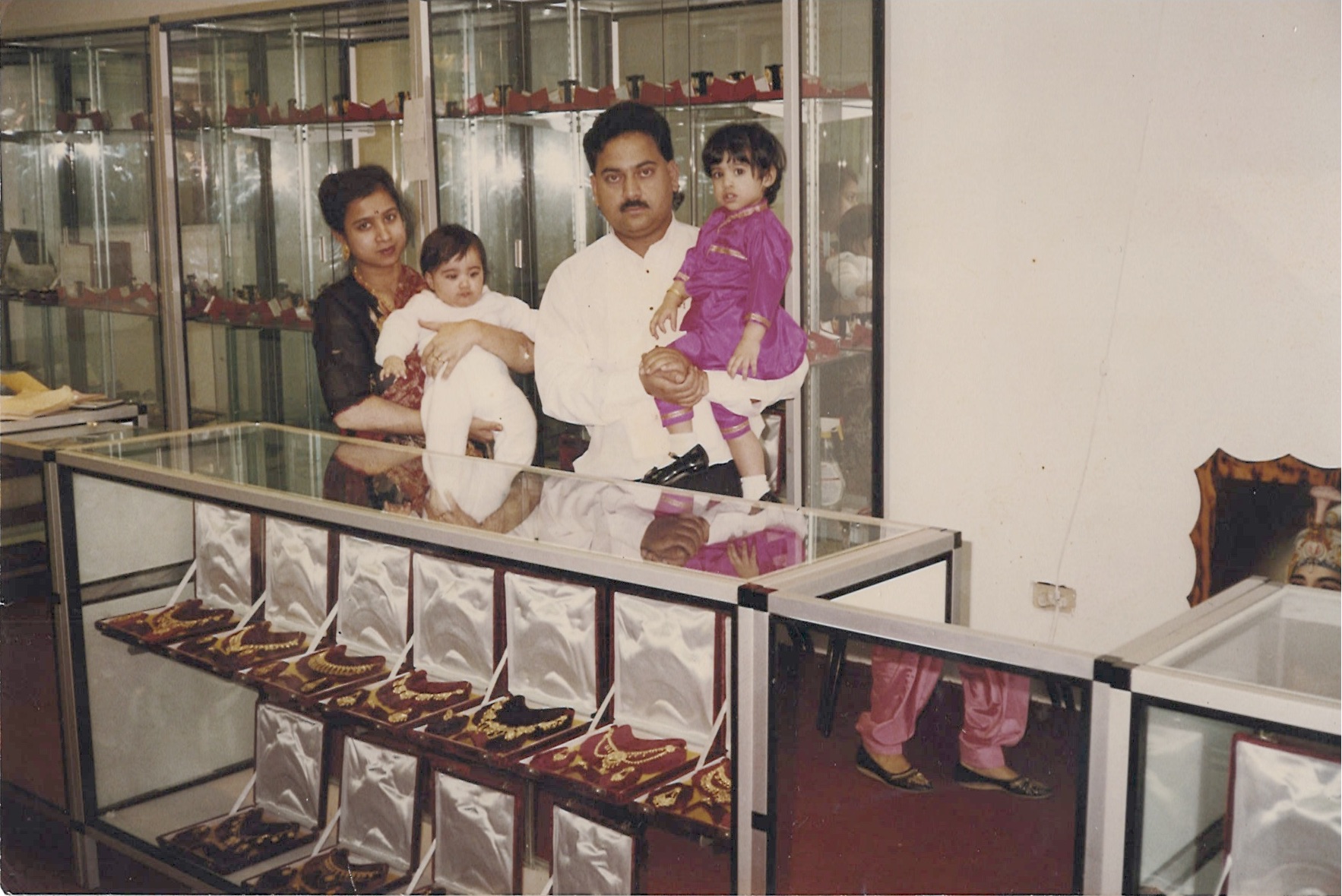 The Nanda family, Seema, Gulzar, Mrignesh and Subah, in Hi-Class Jewellers shortly after it opened on Main Street in 1989. Photo courtesy of the Nandas.

The Punjabi Market was doing well until 2007, Nanda says. The financial crisis in 2008-2009 and increased migration away from South Vancouver to nearby suburbs changed the landscape. There wasn’t as much disposable income to spend, and high rents saw some of the anchor businesses moving away to more affordable areas such as Surrey.

“For a few years, there were a lot of vacancies. It looked quite dilapidated. There were weeds growing,” says Nanda.

There had been some push from the community to get the Punjabi Market more recognition as a tourist destination and support from different levels of government. The community even lobbied for funds to build India Gate, similar to the Millennium Gate marking the entrance to Chinatown. However, when those plans fell through, the community lost its faith in the Punjabi Market’s ability to flourish. 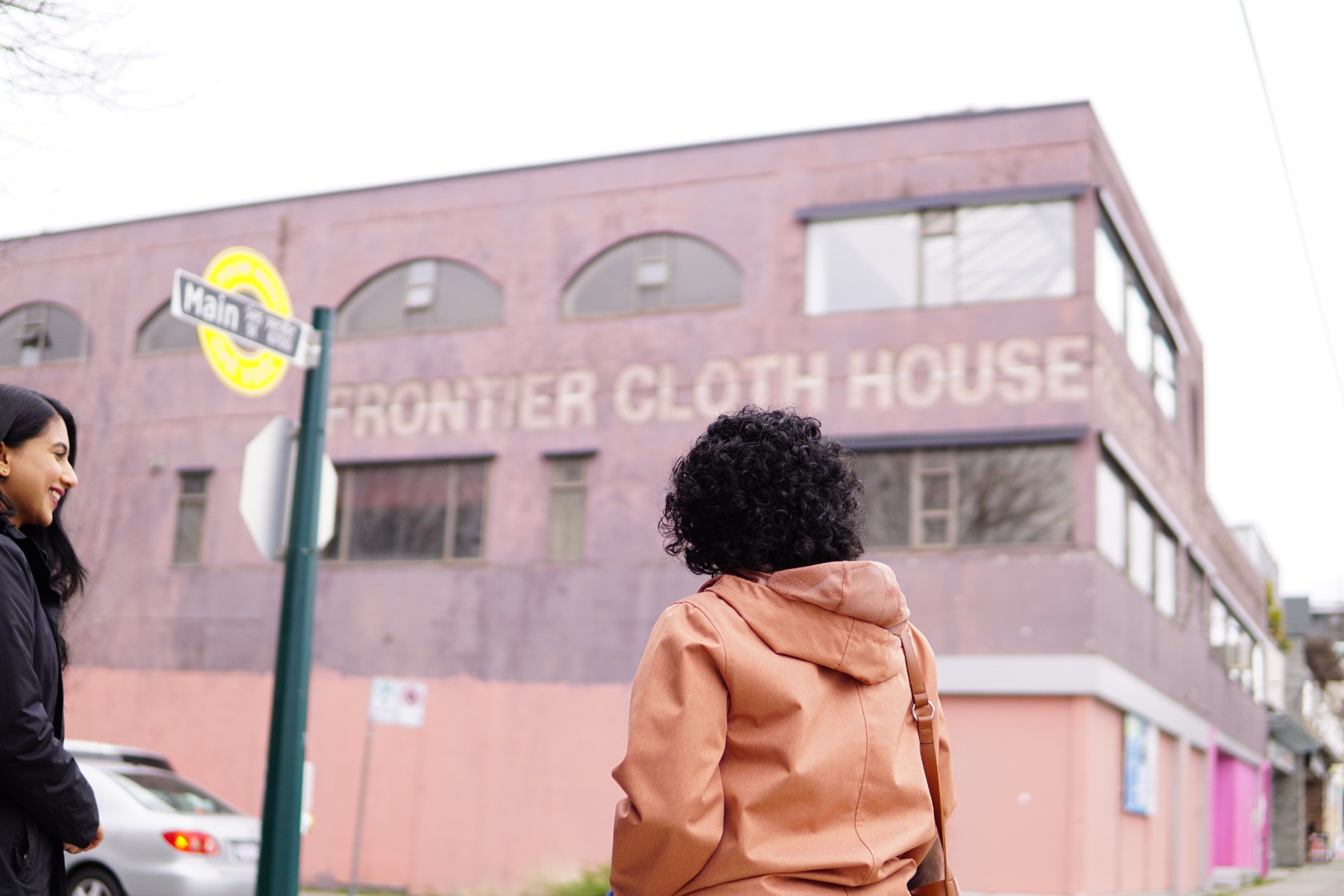 In 2017, after losing his father to complications following a kidney disease and going through a grieving process, Nanda felt a need to reconnect with the Punjabi Market.

“He had provided for my family through this space, he had connected with the community here. I couldn’t lose that. I started talking to people who felt the same way—that we couldn’t let this place fade into obscurity,” Nanda explains.

Thanks in part to an influx of students from the nearby Langara College over the past couple of years, there seems to be renewed interest in the Punjabi Market. Census data shows there are more recent immigrants from South Asia living in Vancouver proper than ever before, adds Nanda. It also helps that the Punjabi Market is easily accessible by public transit and less than a 30-minute drive from Surrey. 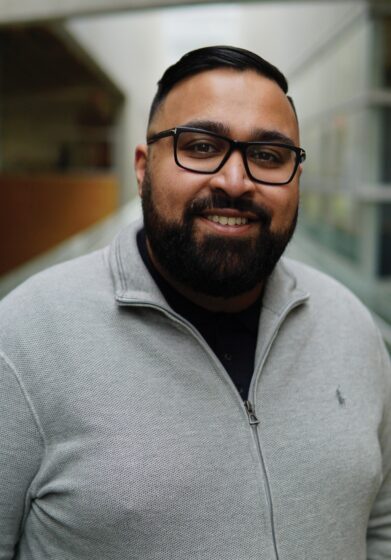 While there may be some tension among new stores opening in the suburbs that are a little more on trend than the culture embodied by a historic space such as the Punjabi Market, the neighbourhood’s new developments may also be bringing about change. From the new six-storey mixed-use building with rental units at the corner of East 49th Avenue and Main Street, built by Orr Development, to the redevelopment project in the works at the other end of the Punjabi Market, the neighbourhood’s face is already changing—even as new businesses such as Roots Cafe, run by a Filipina Canadian entrepreneur committed to preserving the heritage of the neighbourhood, find their own space in the market.

Though Nanda welcomes some redevelopment in the neighbourhood, he hopes any moves toward gentrification will continue to follow a “comprehensive vision that provides protective guidelines to preserve the heritage of the Punjabi Market”—such as the one in place for Vancouver’s Chinatown.

“There is a significant amount of development taking place in Chinatown, but its building form must conform to a very specific policy,” he explains. “We hope the City of Vancouver will prioritize the living heritage of the space when they decide how this space will change. But that’s all TBD.”

For now, the revitalization collective has been actively documenting the history of the Punjabi Market, especially as part of the neighbourhood’s 50th-anniversary celebrations this summer. They produced a film and created social media profiles for people to share their memories of the market.

“The goal is not to make the Punjabi Market like it was in the ’80s or ’90s but to pull on people’s heartstrings a lot. Bring in the nostalgia factor,” Nagra says. “We are trying to revitalize it from an arts and culture standpoint … We want to bring in more storytelling, more street food.”

While COVID-19 has brought some of the collective’s activities to a standstill, Nanda says the collective has more plans for the future, from transforming alleyways behind businesses into lively bazaars, to inviting public art, such as murals and sculptures. The most important part of the process is connecting with the community’s elders, which the collective hopes to resume once social interactions are possible again.

“They are not on Facebook or on Zoom calls,” Nanda notes. “We have to go to them.”