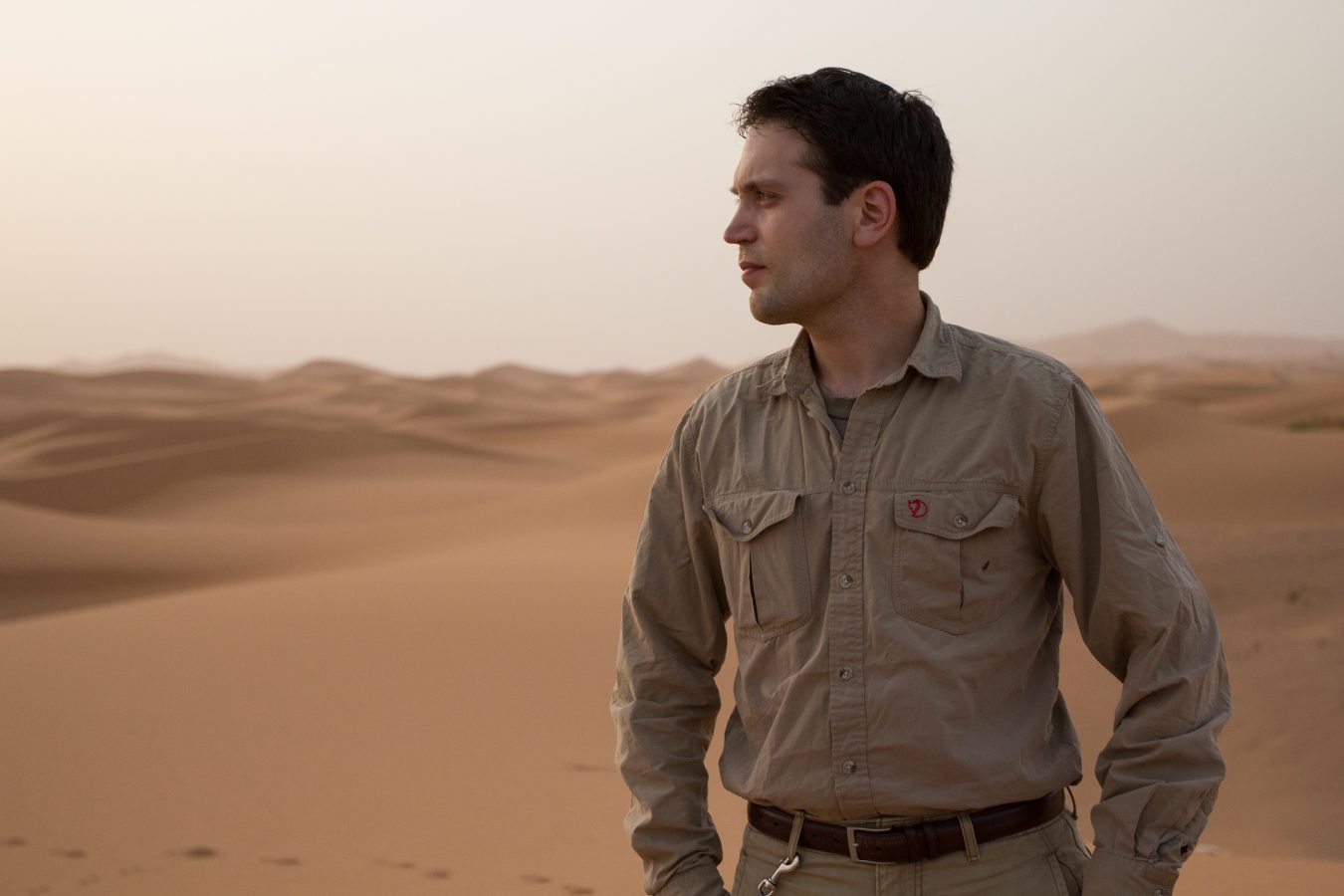 On a cool October evening, renowned German/Moroccan paleontologist and National Geographic Explorer Nizar Ibrahim slowly paces the stage of Vancouver’s Orpheum Theatre before an enthralled audience. Ibrahim’s story of rediscovering the Spinosaurus—the largest predatory dinosaur known to man (even larger than the mighty Tyrannosaurus rex)—is full of more twists and turns than an HBO drama. The true-life tale involves a forgotten scientist, a tragically destroyed discovery, and a hunt for one man in the Sahara Desert—all in the search for an elusive river monster, seemingly lost in time.

“I have described it as the Holy Grail of dinosaur paleontology because it was this bizarre creature we knew very little about,” says Ibrahim, seated backstage at the Orpheum before his talk. “For me, this has been a decade-long quest, and pursuing Spinosaurus became a bit of an obsession.”

Fossils of the Spinosaurus were originally discovered between 1910 and 1914 by German paleontologist Ernst Stromer. During excavations in the Egyptian Sahara, Stromer and his team unearthed a partial skeleton of a unique, semi-aquatic dinosaur. The features of this approximately 50-foot-long creature were very distinct: sharp conical teeth similar to a crocodile, narrow jaws, and an impressive sail-like back made up of long spines (some taller than a human). Stromer named the dinosaur Spinosaurus aegyptiacus, and its remains were later put on display in a museum in Munich. Unfortunately, despite Stromer’s many requests to have them relocated, the fossils were ultimately destroyed due to Allied bombing during the Second World War.

Throughout his career, Ibrahim was inspired by Stromer’s pioneering discovery and eventually embarked on his own mission to find new evidence of this bizarre water-loving dinosaur. In 2008, while doing fieldwork near Erfoud, Morocco, he was approached by a fossil hunter who was selling a box of purplish stones with fossils embedded within. One piece stood out due to its pattern of an unusual milk-white cross-section. “The value of the box was questionable but I decided to buy it anyway,” recalls Ibrahim. “I’ve always been one to piece stories together, and that one bone immediately caught my attention.”

A crucial moment in Ibrahim’s quest occurred when his colleagues at the Natural History Museum in Milan contacted him the following year. Researchers Cristiano Dal Sasso and Simone Maganuco had assembled a partial dinosaur skeleton in the basement of the museum; donated by an Italian collector, the origins of the bones were not certain. Ibrahim was astounded when he visited: laid out on tables, the collection was substantial, and it was clearly, amazingly, part of a Spinosaurus. However, it was the purplish sandstone still encrusted on the bones that truly made him pause. When he raised a piece of spine, he saw a familiar white cross-section, and suddenly he was struck by the possibility that the fossils he had bought in Morocco might belong to this exact same specimen. Ibrahim knew he had to find the fossil hunter who had sold him the box.

“A lot hinged on finding this one man in the Sahara Desert. It was a crazy idea,” he admits. “When I experienced those pivotal moments, it was like a Hollywood movie when you say to yourself, ‘That would never happen in real life.’ During my quest, I realized that real-life adventures can be far more exciting and unlikely than any movie could ever be.”

In 2013, Ibrahim and his colleagues travelled to Erfoud in hopes of finding the fossil hunter. The only information they had to go on was Ibrahim’s distant memory of a man with a moustache. They scoured remote villages and talked to as many local fossil hunters as possible, but no one knew anything about the man in question or the dig site of an unusual dinosaur skeleton.

On the last day of their search, Ibrahim and his colleagues were on the verge of defeat and took refuge at an outdoor cafe table. As they solemnly sipped their tea, Ibrahim looked up just in time to see the man with the moustache walk past. “There are about 50,000 to 60,000 people in Morocco searching for fossils spread out across the country. The odds of finding one person was like playing the lottery, but he did remember me,” says Ibrahim. “It took some convincing, but eventually he agreed to take us to the location, and that was the beginning of how we found the only Spinosaurus dig site in the world.”

Ibrahim later learned that the man had sold bones from the same skeleton to an Italian collector, quite possibly the very one who donated fossils to the museum in Milan. In 2013, colleagues from around the world joined Ibrahim in an epic excavation in the Sahara that uncovered hundreds of fragments of Spinosaurus bones.

Continuing their work in the desert, Ibrahim and his team are still unearthing more Spinosaurus fossils, as well as “many other spectacular new discoveries.” In 2015, Ibrahim became the first paleontologist to become a TED fellow, and he continues to share his story with audiences across North America. To commemorate the discovery of what was believed to be lost forever, Spinosaurus has now been immortalized in a life-sized, anatomically-precise skeletal model at the National Geographic Museum in Washington, D.C.

A diehard explorer at heart, Ibrahim plans to travel to far-flung places in the Sahara that have never been visited by scientists before—but says the quest to find the Spinosaurus will always remain his “perfect adventure.”