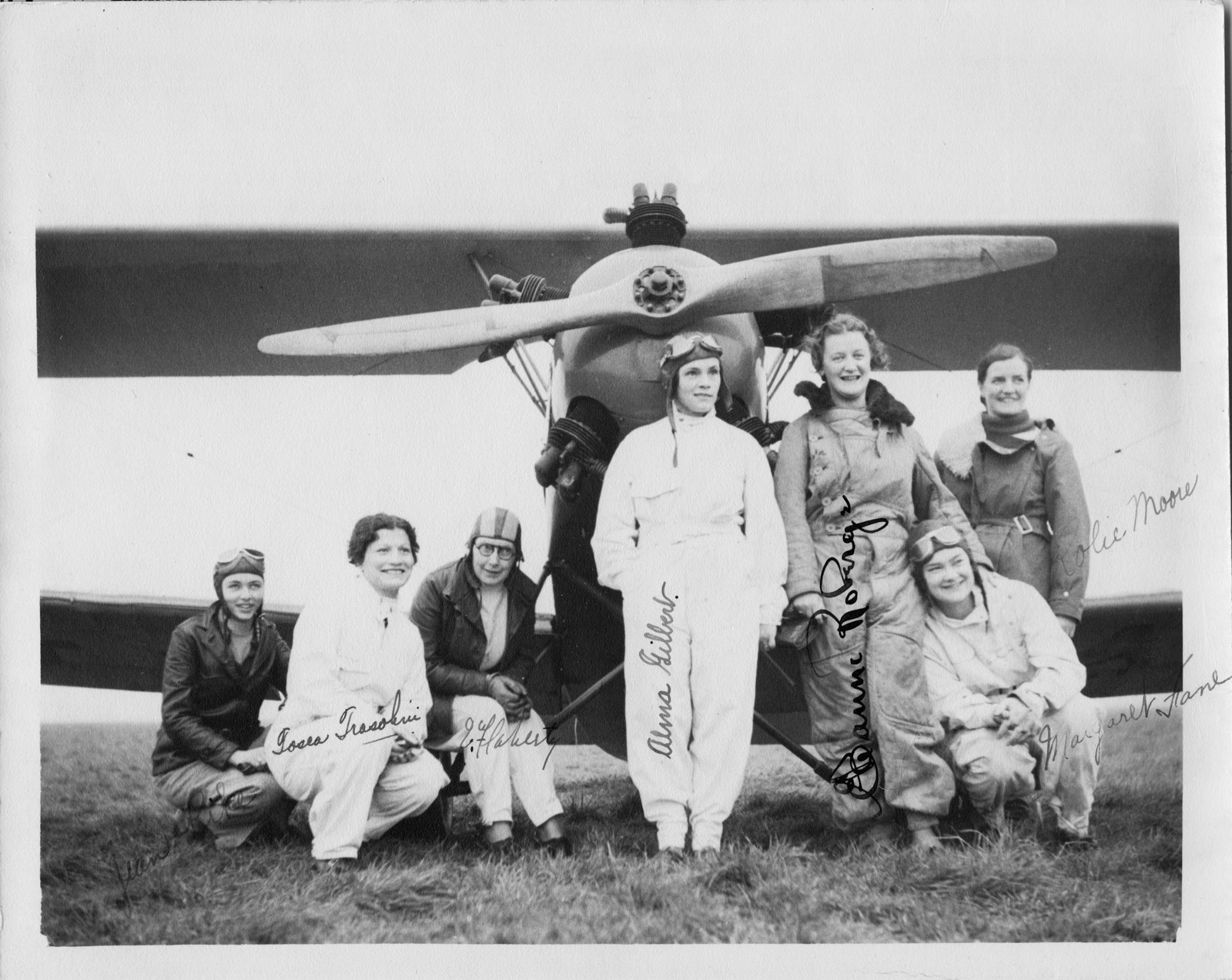 On a wet and miserable November dawn in 1936, Tosca Trasolini took off from the small Sea Island Airport south of Vancouver aboard a Fairchild trainer. The sky was black with a low ceiling and the ground was covered by a foggy haze.

Trasolini was still buzzing in the air when Margaret Fane coaxed a Golden Eagle off the runway and into the wet sky. Both pilots wore leather jackets and helmets, their eyes protected by goggles, as the elements battered them in the biplanes’ open cockpits.

The pilots, part of a group of seven, each took 15-minute turns in the air—their ambition was to keep at least one aircraft in the sky from sun-up to sundown, a feat yet to have been accomplished in the early days of aviation in British Columbia.

Next off the ground was Rosalie (Rolie) Moore behind the controls of a Fleet. She was followed by Jean Pike in a Gipsy Moth, Betsy Flaherty in the Fleet, Elianne Roberge in the Gipsy Moth, and Alma Gilbert in the Fairchild.

Even as the women endured the elements, proving they had the stamina and the skill to do the job, some male pilots on the ground insisted blind navigation would lead to a catastrophe.

In the end, happily, the men were wrong. When Fane landed just after sundown at 5:02 p.m., the pilots had succeeded in becoming the first women in Canada to complete a dawn-to-dusk relay.

The stunt was designed to showcase their belief that a woman’s place was in the sky every bit as much as in the home.

“Of course we are happy to have done it,” Trasolini said afterward.

The club did not yet have a name. Its members had met after Fane visited with some of the founders of the Ninety-Nines Club for American women pilots, including the famed aviatrix Amelia Earhart. When Fane asked to establish a Canadian chapter, she was told the country had too few possible members. She returned home disappointed, but the Vancouver flyers persevered by forming their own club. They soon called themselves the Flying Seven. 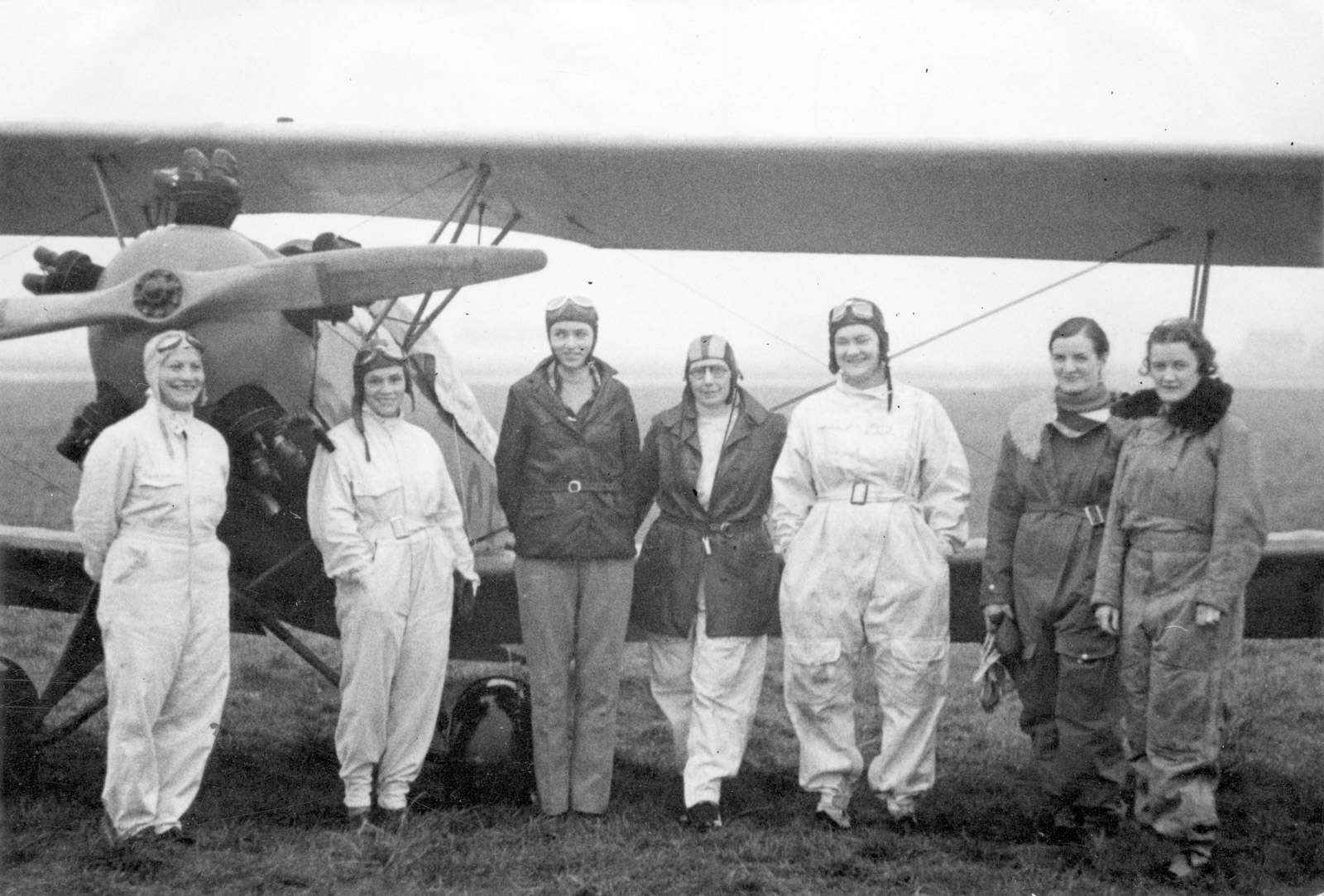 The Flying Seven in 1936. Image courtesy of the Vancouver Archives.

“To join the Flying Seven, you had to have a flying licence,” Elianne (née Roberge) Schlageter told historian Chuck Davis in 1980. “We wouldn’t take learners. All the girls were experienced. I started flying in 1929 and stopped in 1963. My licence is No. 678, and I still have it.”

They promised to hold future stunts to encourage more women to get their pilot’s licence. In time, they even adopted a smart-looking uniform of culottes with a silk blouse worn beneath a wool jacket, the outfit topped by a distinguished Glengarry cap, all in grey.

When war broke out in 1939, the women tried to enlist as pilots. After being rebuffed by the air force, they turned their attention to fundraising to help the war effort as much as possible.

On a fair June afternoon in 1940, the routine of an ordinary Vancouver workday was interrupted by the wail of air-raid sirens.

A trio of airplanes flew by lazily, high overhead. The buzz of their single engines was distorted on the ground by a stiff breeze.

Without warning, each plane dropped its payload. The sky was filled with scattering pamphlets, paper chaff dispersed by wind and gravity over downtown.

The pieces not blown into the harbour fluttered down into the city’s business section. The handbills proclaimed: “Smash the Nazi.” The patriotic pamphlet encouraged civilians to get behind the war effort. “Swing in behind Vancouver’s Air Supremacy Drive,” it read. “Give dimes or dollars to buy our boys more planes.”

The same stunt was then repeated over New Westminster. More than 100,000 “bomphlets” were tossed overboard by the high-flying air crews.

Members of the Flying Seven posed for a photograph in front of an airplane while wearing white, one-piece flight suits. They all flashed a thumbs-up. Another year would pass before Winston Churchill would popularize the now familiar two-finger wartime salute meaning V for Victory.

Alas, a stiff northeast wind and a city ordinance forbidding flights lower than 3,000 feet caused much of the raid’s assistance to be blown into English Bay and Burrard Inlet.

It was June 19, 1940. The front page of the Vancouver Sun that day included a photograph of “Axis ‘Big Shots’” Hitler and Mussolini, while the eight-column banner headline proclaimed: “U.S. Warns Hitler: ‘Hands Off Americas.’”

At Woodward’s, summer turbans available in white, rose, blue, navy, or black cost just $1.95. A 20-piece Fiesta dinnerware set was available for $2.98. A nine-room house at West 8th and Vine in Kitsilano was for sale at $2,750, or about twice the cost of a year-old 1939 Lincoln-Zephyr sedan. If those eye-popping prices were too much, one could imbibe from a pint of rye for $1.70.

The pint-sized members of the Sun Ray Club enjoyed the comic adventures of hillbilly Li’l Abner, boxer Joe Palooka, and caveman Alley Oop. The Hunchback of Notre Dame was showing at the Stanley, while matinee-goers needed only 20 cents to catch a screening of Henry Fonda starring in The Grapes of Wrath. Fonda was also one of the stars along with Alice Faye and Don Ameche in Lillian Russell, which was to open the next day at the Capitol. 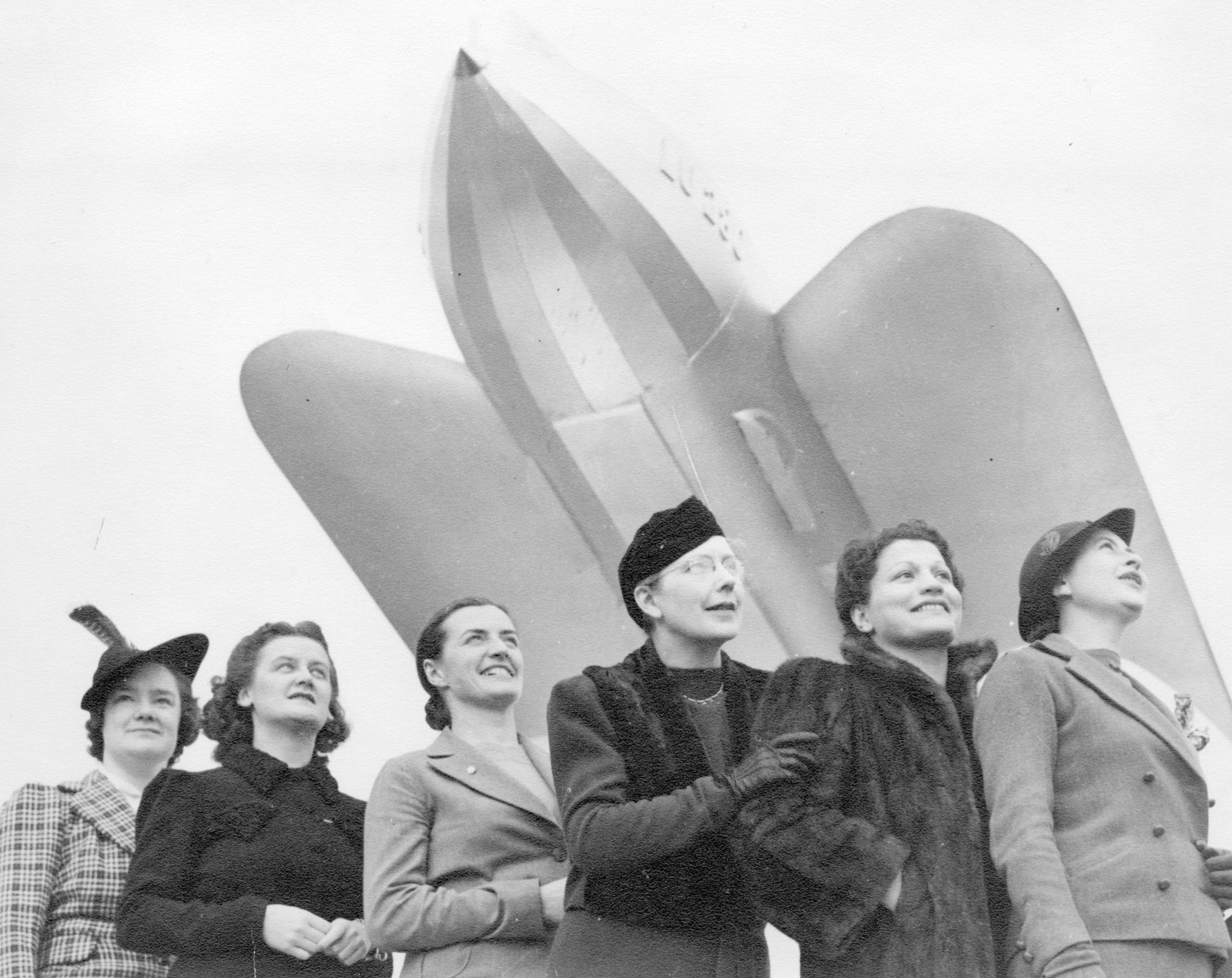 Six of the Flying Seven, circa 1940. Image courtesy of the Vancouver Archives.

The Flying Seven’s support of the Air Supremacy Drive was a success. A large crowd flocked to a variety show at the Orpheum that included a 16-piece orchestra. The Seven worked the aisles during intermission, selling chocolates.

In the end, more than $100,000 was raised, enough to purchase eight Tiger Moths for use at No. 8 Elementary Flying Training School, which was established adjacent to the Sea Island Airport where the Flying Seven first announced their presence to the city. (The old airport is now the site of the South Terminal of YVR.) Commonwealth pilots from around the world got their training on those planes before going off to fight fascists.

The Flying Seven organized training courses of their own. They rolled up their sleeves and got their hands greasy while teaching airplane maintenance to other women. They gave instruction in the fine art of packing a parachute. Some graduates then joined the Royal Canadian Air Force Women’s Division to contribute to the war effort in non-combat roles.

Three of the original members of the Flying Seven wound up in California after marrying. Margaret Fane garnered headlines in American newspapers as the operator of a radio station for the Bridge River & Cariboo Airways. She was posted to the isolated gold-rush town of Zeballos on Vancouver Island, where her other duties included bookkeeping, reservations, handling freight waybills, fuelling the floatplanes, and protecting the stocks of liquor in an office where gold was left out in the open. (There was no way to escape from Zeballos with gold, while a distilled potable was portable and, in the hands of loggers and miners, not likely to be recovered.) More than once, she wound up in the water while attempting to load a drunken logger aboard a float plane. In time, she returned to Vancouver, where she became an executive with Canadian Pacific Airlines.

After retiring, she lived in a home in Richmond within sight of airplanes taking off and landing at an airport larger than she could ever have imagined in 1936 when she once took part in a dawn-to-dusk patrol to herald the arrival of an all-women aviators club. Even when she could no longer pilot a plane, she could watch others soar into the sky.