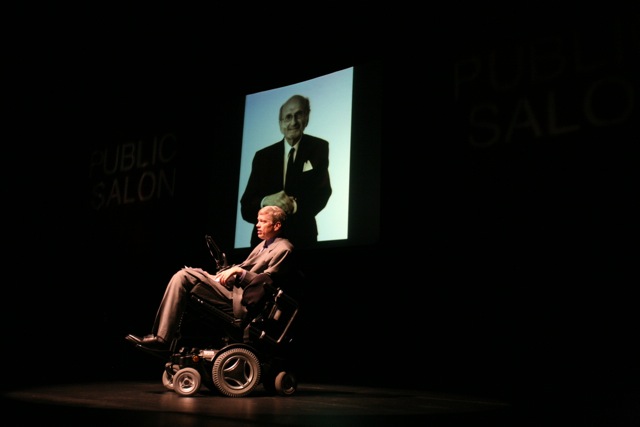 Vancouver recently played host to some of the world’s brightest influencers and thinkers during the 2015 TED Conference, but the city is also home to another speaker series—former mayor Sam Sullivan’s Public Salons—which some have dubbed the “100-Mile TED”. The nickname, a reference to local journalist J.B. MacKinnon’s popular book The 100-Mile Diet: A Year of Local Eating, is rather accurate. Sullivan’s Salons—during which eight people get up on stage and speak for seven minutes—emphasize local ideas and people, focusing on what makes Vancouver a progressive metropolis. “It’s wonderful to see the new thinking that is going on [here],” says Sullivan, who was mayor from 2005 to 2008 and is now the MLA for Vancouver False Creek.

The salons began humbly as private dinner parties hosted by Sullivan and his wife, Lynn Zanatta. The couple found themselves intrigued by many people in the city who they did not know personally, so they began renting out a room at the Opus Hotel and inviting a handful of these interesting people for dinner—all the guests had to do in return was speak for a few minutes on a topic that they were passionate about.

The discussions and connections that came out of those dinners were stimulating, particularly for one regular attendee named Abraham Rogatnick, an architect and professor. “He was the one who said, ‘Well, what you’re doing is you’re hosting a salon,’” Sullivan recalls. “I’d never even heard of that.” A mentor to Sullivan, Rogatnick explained that the tradition dates back to, perhaps most notably, the French Revolution. Inspired by the dinners, Rogatnick suggested that Sullivan and Zanatta make their talks open to the public. They explored the idea, but it wasn’t until Rogatnick died in 2009 that the couple decided to turn his vision into reality.

“We talked about it [and thought], ‘Why don’t we, as a tribute to him, do something like he’d asked?’” Sullivan says. They held a few speed lunches, where each guest had three minutes to speak, and then in June 2010 they decided to rent out the Playhouse Theatre and give each person seven minutes. “We thought, ‘Well, let’s just try. Go all out, one for Abraham.’” That first night the 668-seat theatre, to their surprise, was packed. Since then, there have been 21 Public Salons at the Playhouse, featuring an array of speakers from CEOs to writers to philanthropists to entrepreneurs to artists.

Presented by Sullivan’s Global Civic Policy Society, the Salons are described by Zanatta as “introducing Vancouver to itself”. Many people feel more connected to the city and community after attending an event, according to Sullivan. What he hopes to do with the Salons is show Vancouverites that big thinkers aren’t just flying in for TED—they’re right here, all around us, all year. “We’re really learning how remarkable Vancouver is,” says Sullivan. “How different it is from many cities.” Surrounded by pioneering minds, it is easy not only to stay in love with this city, but perhaps to fall in love with it over and over again.