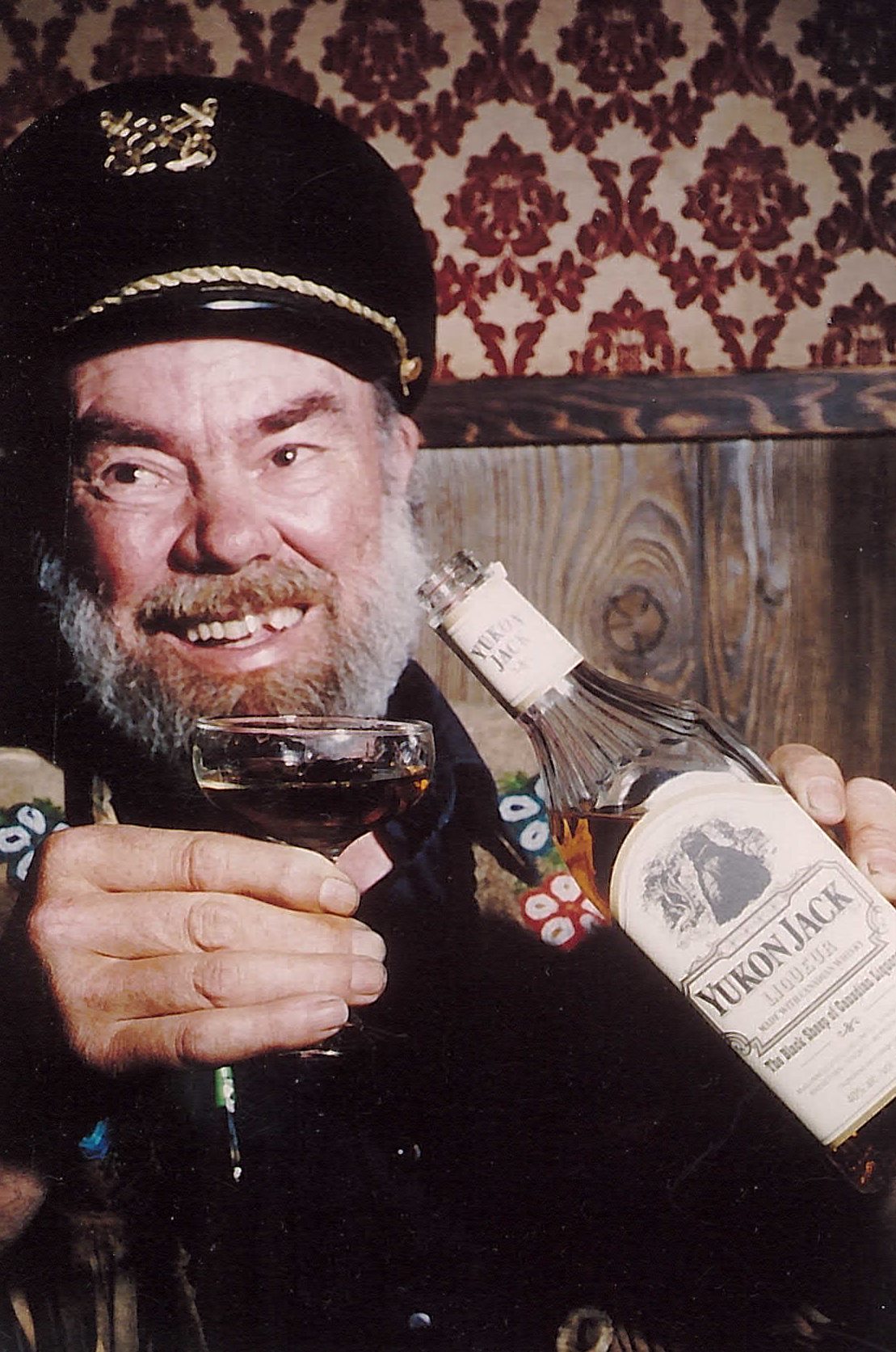 Captain Dick raises a glass in an undated photo. Photo courtesy of the Downtown Hotel.

The Yukon is a wild land of fertile imaginations and desperate schemes. It is a place of myth, legend, and reinvention. The territory is also where an ordinary Richard Stevenson from a backwoods New Brunswick hamlet can transform himself into Captain Dick, the River Rat, a bushy bearded, fringed buckskin-wearing, sailor’s cap-doffing character who seemed to have sprung from a stanza of one of Robert Service’s sourdough poems. 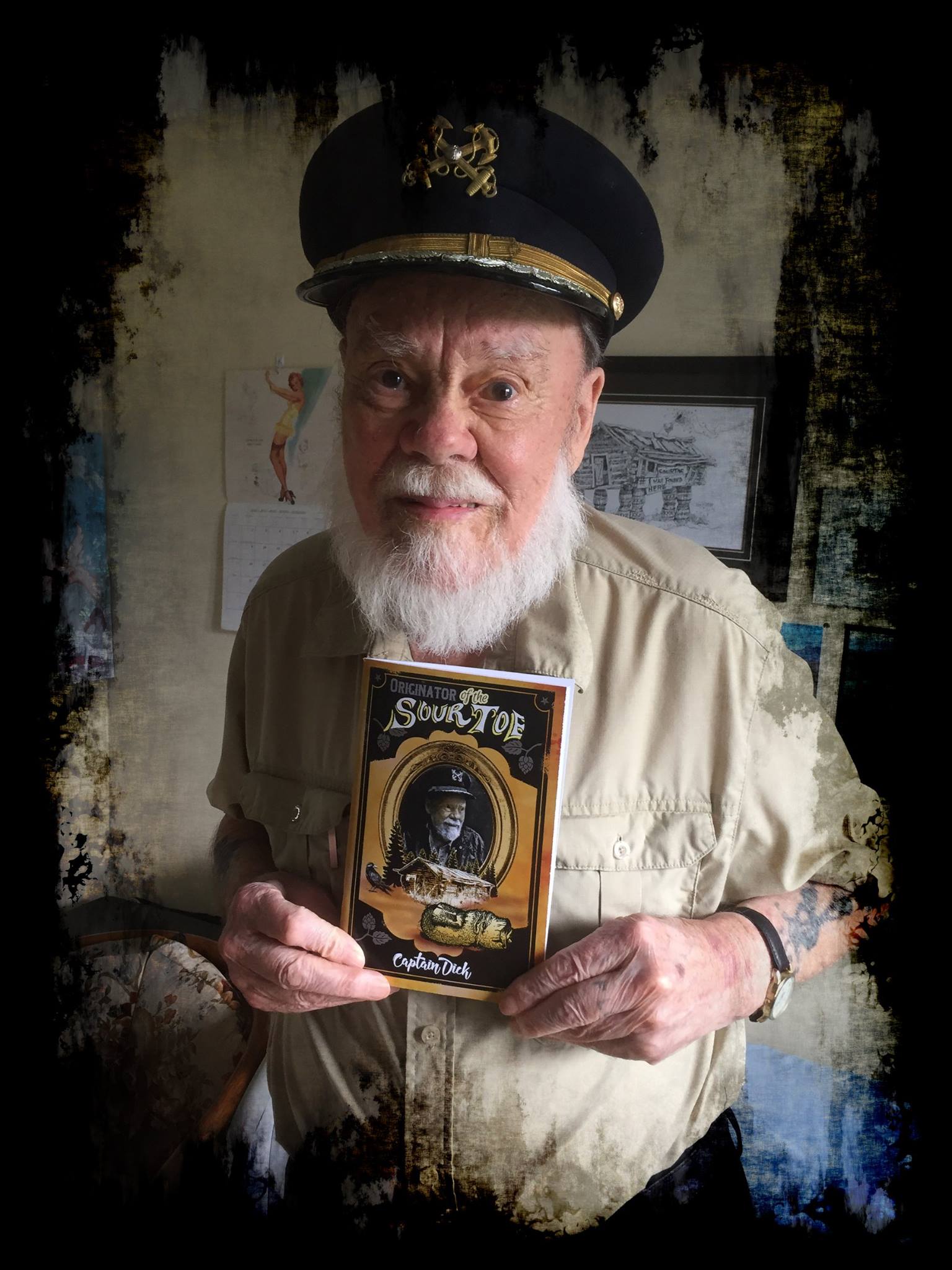 Before he became Captain Dick, the young man hitchhiked across the country to find work, falling timber as a logger and riding as a cowboy on the Alberta rangeland. Both were dangerous and paid just enough to keep a man on the job, so he hitchhiked north to seek his fortune, like so many before him, in the gold streams of the Klondike. He arrived in 1956 and never left.

He failed to strike a mother lode despite spending several seasons immersed in icy water panning for nuggets. He made an honest living, of sorts, entertaining tourists aboard the 60-passenger Yukon Lou, a sternwheeler he operated along the Yukon River.

He never abandoned the hunt for a get-rich-quick scheme. He sold eight-foot-square mining claims to southerners for $5. He tried selling a cache of old gold rush-era beer bottles at $3 a pop. During the Pet Rock craze in the 1970s, he peddled Yukon Wild Rocks from an actual Klondike gold claim, and organized a Miss Nude Yukon beauty pageant, billed as the first of its kind North of 60, but it was a bust as he sold only a single ticket. He was better at generating publicity than revenue.

One of his ideas panned out. Captain Dick bought a tin-roof shack at the mouth of Sixtymile River from an old fur trapper and rumrunner named Otto Lykens. Back in the 1920s, Otto and his brother Louie smuggled liquor into Alaska during Prohibition at the behest of thirsty miners. The brothers made their runs during snowstorms so as to make it difficult for police to track them. On one run, Louie soaked his foot. By the time they got home, a frostbitten big toe threatened to turn gangrenous. Fortified with rum, Louie’s toe was removed and here the story takes many different paths. Either Louie removed it himself, or his brother did so. It was either sawed off, or axed off, or shot off (with either a pistol or a .30-30 rifle), or chopped off with horse snippers and cauterized with a red-hot iron. In any case, the brothers did not dispose of the toe. Captain Dick found it in a pickle jar in the shack, preserved in salt. 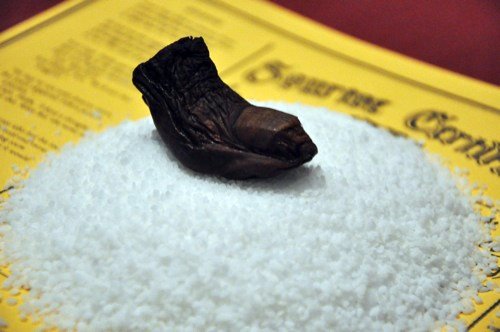 An idea struck the captain “like a bolt of lightning after about 10 rounds of beer” with cronies at the Sluice Box Lounge in the Eldorado Hotel, he told a reporter in Dawson City in 1973. To mark the 75th anniversary of the 1898 Klondike Gold Rush, he invented the Yukon Sourtoe, a cocktail with a kick. Champagne was poured into a beer glass. The bartender, using ice tongs, plucked the mummified toe into the drink. Without blindfold, eyes open,  Captain Dick sipped the bubbly, the toe bumping against his lips. Thus was born the Exalted Order of the Yukon Sourtoe.

One of the first to follow suit was Lyn Hancock, the author and photographer of There’s a Seal in My Sleeping Bag, who managed to drink the champagne despite the presence of “one very large, very old and very ugly big toe.” Others followed, including a federal cabinet minister and Pierre Berton, who pronounced the Sourtoe to be a “disgustingly delicious drink.”

Princess Anne was invited, but demurred. The 725th person to be inducted into the Order, a place miner from the Lower Mainland by the name of Gary Young, was so drunk he fell off his stool and accidentally swallowed the toe.

Another toe was procured for $100 from Alice Lawrence of Fort Saskatchewan, Alta. That toe was lost during a renovation. A trapper from Faro, Yukon, donated toe number three. In turn, it was swallowed by a Royal Canadian Legion member as the drink was making a money-raising tour of London, Ont. Toe number four, resulting from a lawn mower accident, was stolen by Texans and later recovered by the Royal Canadian Mounted Police.

Over time, several spare toes were accumulated. The drink changed as champagne was replaced by any drink of choice, with Yukon Jack, a liqueur, favoured. The venue changed, too, as the cocktail is now served at the Sourdough Saloon at the Downtown Hotel, where patrons recite the club’s membership motto: “You can drink it fast, you can drink it slow, but your lips must touch the toe.”

By the time Captain Dick died on Nov. 14 at 89, some 93,000 people had tried his concoction. “I thought maybe only 10 or 12 people would ever do it,” he told CBC Radio two years ago. The old captain had one final request. He wanted his own toes to be preserved for future imbibers.