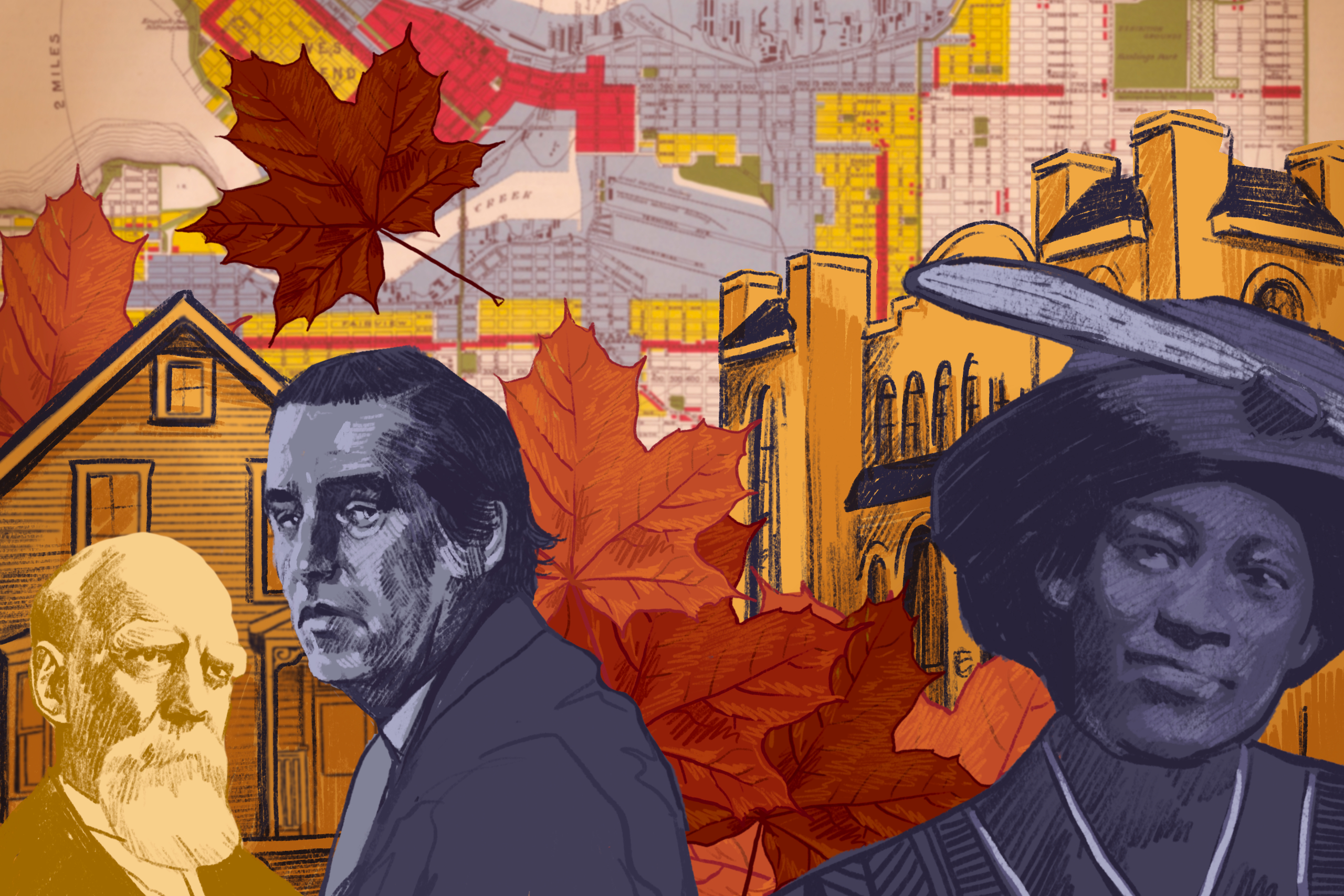 This story is the second in our series on the hidden history of Vancouver’s neighbourhoods. Read more here.

On January 9, 1972, as Vancouver Mayor Tom Campbell crossed the newly inaugurated Georgia Viaduct⁠—replacing a crumbling structure with the same name built in 1915⁠—he was met by protestors who kicked and spat on his limousine. The construction of the elevated roadway had destroyed Hogan’s Alley, the city’s historic Black community in Strathcona, and was the first step in the construction of a freeway to downtown Vancouver that would further decimate the area in the name of urban renewal.

On realty websites, Strathcona is known for its historic Victorian and Queen Anne–style homes, with their gabled roofs and recessed porches, buffed to a multimillion-dollar sheen, belying its proximity to grittier areas such as Chinatown and the Downtown Eastside. (The city lumps together all three neighbourhoods, along with False Creek Flats, which holds Emily Carr University of Art + Design, as Strathcona, but this essay will speak only of the area bordered longitudinally by Gore Avenue and Clark Drive and latitudinally by Hastings and Strathcona Park.) Throughout its history, the neighbourhood, known until the 1950s as the East End, has organized to repel efforts to demolish it and displace the many marginalized communities to which it has given refuge.

Before European settlement, the area was a Coast Salish camp known as K’emk’emeláy, meaning “big leaf maple trees.” Afterwards, a neighbourhood eventually grew from the establishment of the nearby Hastings Mill in 1865. In his 2008 revisionist historical novel The Man Game, Lee Henderson describes the “greenish-black smog hanging loose from the brick smokestacks” of Hastings Mill on present-day Dunlevy Street, and the beaches below it “strewn with [salmon] carcasses idling in the waves of the tide.”

From an early collection of shacks around the mill, the settlement saw buildings erected at the turn of the 20th century that stand to this day. This includes ​​Lord Strathcona Elementary on Jackson and Keefer, which was built in 1897 and named, like the area, after the Scottish-born businessman who drove the last spike of the Canadian Pacific Railway. In 1911, when Strathcona was the hub of Jewish Vancouver, the city’s first synagogue (until then, rented houses were used for worship) appeared on Heatley, off Pender. A larger synagogue, built in 1921, incorporated the original structure. And in 1917, Alfonzo Benedetti, an immigrant from Abruzzo, Italy, by way of Ellis Island, opened an eponymous business. Still owned by the family a century later, Benny’s Market remains the place to go for capicollo sandwiches. In the decades that followed, meeting places were built for emerging communities from Russia, Portugal, Croatia, and the Ukraine.

What survives from Strathcona’s casts in stark relief what has disappeared. Hogan’s Alley, a narrow T-shaped path that ran between Union and Prior Streets, and was bounded by Main and Jackson on each side, formed the heart of Vancouver’s Black community from around 1910 onwards. Neighbourhood landmarks included the African Methodist Church Fountain Chapel (co-founded by Nora Hendrix, whose grandson, guitar god Jimi Hendrix, lived in the area with her in the 1940s) and the Pullman Porters’ Club, a hangout for Black railway porters who worked at the nearby Great Northern Railway terminal. A three-room establishment with oilcloth-covered tables, Vie’s Chicken and Steak House welcomed stars such as Lena Horne, Billie Holliday, and Sammy Davis Jr. and remained open until 4 a.m. “There was no liquor licence so folks would bring their own along,” recalls poet Adelene da Soul, granddaughter of owners Vie and Bob Moore.

Among the marginalized communities that found sanctuary in Strathcona were the economically disenfranchised. In the aftermath of the 1929 stock market crash, “hobo jungles” formed in pockets of the neighbourhood, including a settlement of laid-off immigrant workers in the city dump, now Strathcona Park.. These makeshift communities were all demolished, and its residents evicted, by the city in fall 1931—the official excuse was the spread of typhoid.

It was only natural for this area to also become a site of working-class organizing. In November 1933, when the Workers Ex-Servicemen’s League (WEL), a group with Communist party links that advocated for social housing and higher wages, gathered at Lord Strathcona to prepare for an Armistice Day rally, they were met by mounted police officers who “let loose with curses and clubs.” Decades later, in 1971, the Militant Mothers of Raymur blockaded the rail line that ran through the neighbourhood to protest the trains that crossed the path their children took to school. The pedestrian overpass that was built to meet their demands was renamed after these residents of the Raymur Place housing project, many of them single mothers and Black, in 2020.

After Strathcona was rezoned as an industrial area in the 1930s, making it difficult for residents to obtain mortgages or make home improvements, city council noticed the decline. Their plan, conceived by UBC professor Leonard Marsh in a report called Rebuilding a Neighbourhood in 1950, involved bulldozing large swaths of the area to construct social housing and park space. When the first phase was implemented in 1962, MacLean Park on Jackson Street became a housing project. Almost as if to maximize destruction and displacement, a block of expropriated residential homes nearby were then torn down the following year to make way for what is currently named MacLean Park.

The next phase of displacement, an eight-lane freeway, was stopped only through opposition by the Strathcona Property Owners and Tenants Association (SPOTA, a group co-founded by Walter and Mary Lee Chan, and their daughter Shirley). In November 1967, when 500 people crowded two city council meeting rooms to protest the freeway plan, Mayor Campbell mocked the uproar as “a tempest in a Chinese teapot.”

Largely made up of the Chinese community that dominated Strathcona by the 1960s, SPOTA halted the misguided destructiveness of slum clearance and prompted the city to seek input from residents to refresh existing streets and build a new community centre. SPOTA, through its offshoot Strathcona Area Housing Society, then set about creating infill housing units in previously demolished areas. The result, designed by the architect and civic builder Joe Wai, combined the cost-effective, utilitarian ubiquity of the Vancouver Special with the tall, narrow shape and pitched roofs of the area’s existing single-family homes. The Joe Wai Special is now a familiar, distinctive facet of the neighbourhood’s architecture.

“For at least a century there have been two Strathconas in Vancouver,” writer and housing activist Nathan Crompton writes, “the Strathcona of urban elites and the Strathcona of the working class.” Despite the million-dollar homeowners, 38 per cent of its population belongs to the bottom 10th of Canadians in income level, over twice that of the city as a whole (15 per cent). The neighbourhood is also home to a still-sizeable but shrinking Chinese population and many artists and cultural workers.

Meanwhile, the Georgia Street Viaduct, which may forever live on as a Deadpool shooting location, has been slated for demolition since 2018, with plans for a Black Cultural Centre to atone for the erasure of Hogan’s Alley. These conciliatory plans occur alongside the forced eviction of a tent encampment in Strathcona Park in 2021—with the spread of COVID-19 as an excuse—90 years after the city forced out another group of people for fear of disease. As efforts to acknowledge the errors of the past distract us from others repeated in real time, an observation Hogan’s Alley Memorial Project co-founder Wayde Compton makes in an essay about Hogan’s Alley comes to mind: “We remember in the present tense.”