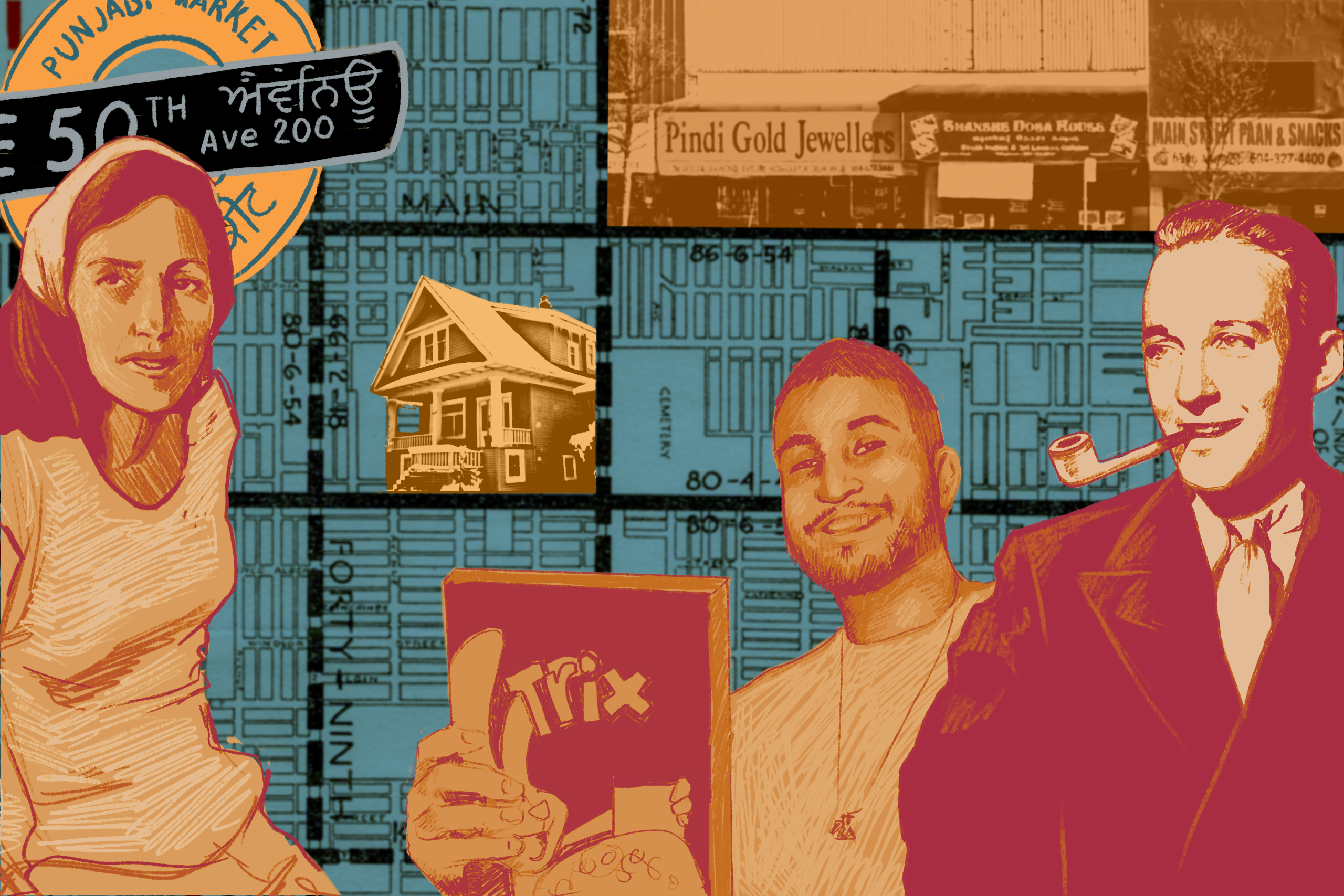 This story is the fourth in our series on the hidden history of Vancouver’s neighbourhoods. Read more here.

In a city of strenuously ignored disparities, east and west is one division Vancouver locals enjoy playing up. Like their high-end electric vehicles, Westsiders emit a spectral hum of satisfaction with their shady, tree-lined streets and intergenerational wealth. Those on the east side are louder about their civic pride, displaying Ken Lum–inspired East Van onesies and coffee mugs in their homes within walking distance of microbrew pubs and farm-to-table restaurants. And yet as home values exceed nosebleed levels on the east side, there doesn’t seem to be much difference between east and west, except for perhaps tattoo acceptance levels and the length of beards.

As CBC municipal reporter Justin McElroy wrote in 2018, “In public amenities, in demographics, in political representation—the more significant difference is between north and south.” Take, for example, the original South Vancouver neighbourhood, Sunset, where census information and election results reveal an area that is poorer, more culturally conservative, more family oriented, and more ethnically and linguistically diverse than those closer to downtown. Despite two lively commercial strips—South Hill and Punjabi Market—and a large, beloved recreational area in Memorial South Park, the area captures little outside interest. And because most of it was developed from dense forest into farmland much later than downtown and downtown-adjacent areas, there’s also a dearth of heritage buildings. All these factors mean that, if Vancouver were the United States, this neighbourhood would be the flyover region.

The north-south rift has existed for over a century, ever since the Municipality of South Vancouver was incorporated in 1892, with its municipal hall built at the foot of Wilson Street (now East 41st Avenue) and Fraser Street (formerly North Arm Road), to connect downtown Vancouver to a bridge that led to Lulu Island. South Vancouver spanned all the land south of 16th Avenue, as well as west side areas such as Point Grey and Kerrisdale, whose residents grew tired of South Vancouver’s more austere governance and later broke off to form their own municipality. In those early days, dairy farms and orchards surrounded the “village” on Main and Fraser streets. New streetcar lines and a land-tax policy that encouraged building led to a population boom. “Many of these homes were distributed haphazardly across the district, interrupted by stretches of stump-infested vacant lots,” Daniel Francis observed in Becoming Vancouver: A History.

In 1929, South Vancouver (along with Point Grey) was absorbed into Vancouver and was booming by the end of the Second World War. In 1945, the growing neighbourhood of Sunset⁠—between Knight and Ontario streets south of 41st Avenue⁠—which already featured a bowling alley and Sears department store on Fraser Street, demanded new amenities. Schoolchildren rallied for a community centre, carrying signs that read, “We Are Not Delinquent Yet!” and “We Want a Gym, But Our Chances Are Slim!” Bing Crosby came to the rescue. After being courted by a couple of Sunset residents, the White Christmas star performed for an audience of 9,000 at the Vancouver Forum on September 22, 1948, broadcast on more than 200 radio stations in the U.S. and Canada and raising $32,000. The Sunset Community Centre, founded in 1950, still displays a picture of him.

Around the same time, Germans and Russian Mennonites flocked to the area after the war, radically shifting Sunset’s demographics. Mennonite and Lutheran churches—some offering German-language services—are still found in the neighbourhood, but Sunset’s current demographics have more to do with successive waves of immigration from Asia.

South Asian immigrants in the 1970s founded Punjabi Market in the blocks around 49th Avenue and Main Street, where one can still find vegetarian buffets, saris, and gold jewellery. Although suburban migration has bled this commercial drag’s vitality, leading to revitalization plans, the area’s annual Vaisakhi parade is one of the few events that draws people from outside the community. Later waves of immigration also brought residents from the Chinese diaspora, Vietnam, and the Philippines.

Even though Sunset is a quiet, almost staid place, it keeps its own cache of buried trauma. Few people remember that Pat Lowther, a rising star in Canadian literature, lived in a mustard-yellow house on East 46th Avenue. On the brink of wider acclaim in 1975, the 40-year-old mother of two girls went missing. Her poems, with titles such as “To a Woman Who Died of 34 Stab Wounds,” in which she wrote about domestic violence in stark, plaintive imagery, proved prophetic. “Everything here’s a weapon,” she wrote in “Kitchen Murder.” “i pick up a meat fork, imagine plunging it in, a heavy male thrust.” Her body was found outside the city three weeks after her disappearance. Her husband, Roy, described by true-crime writer Eve Lazarus as a “failed poet and teacher,” was later convicted of her murder. Lowther’s memory is honoured by an annual poetry prize in her name given by the League of Canadian Poets.

More recently, in 2020, the neighbourhood was the site of the murder of Amin Shahin Shakur, nicknamed “Snackie Chan,” the 30-year-old co-proprietor of cannabis dispensary THC Canada and Dank Mart, a bodega that specializes in imported snacks and candy in Punjabi Market. The man accused of killing the entrepreneur will stand trial in 2023.

Dank Mart remains in business, but its on-trend offerings contrast with the more traditional, independently owned markets and restaurants in the area. Walking down South Hill, one can dine on anything from pho to Spam sandwiches to Indian street food. Grocers offer bargains on “ready to eat” produce and lemon-flavoured pistachios. “They know with their hands / and noses the value / of all things grown / They will make you a bargain price / on overripe cantaloupe,” Lowther wrote in a poem entitled “The Chinese Greengrocers.” The only thing that’s hard to buy is a bag of rice under 40 pounds. Although it’s never been a destination for Vancouverites from downtown, the residents of Sunset have no reason to leave.