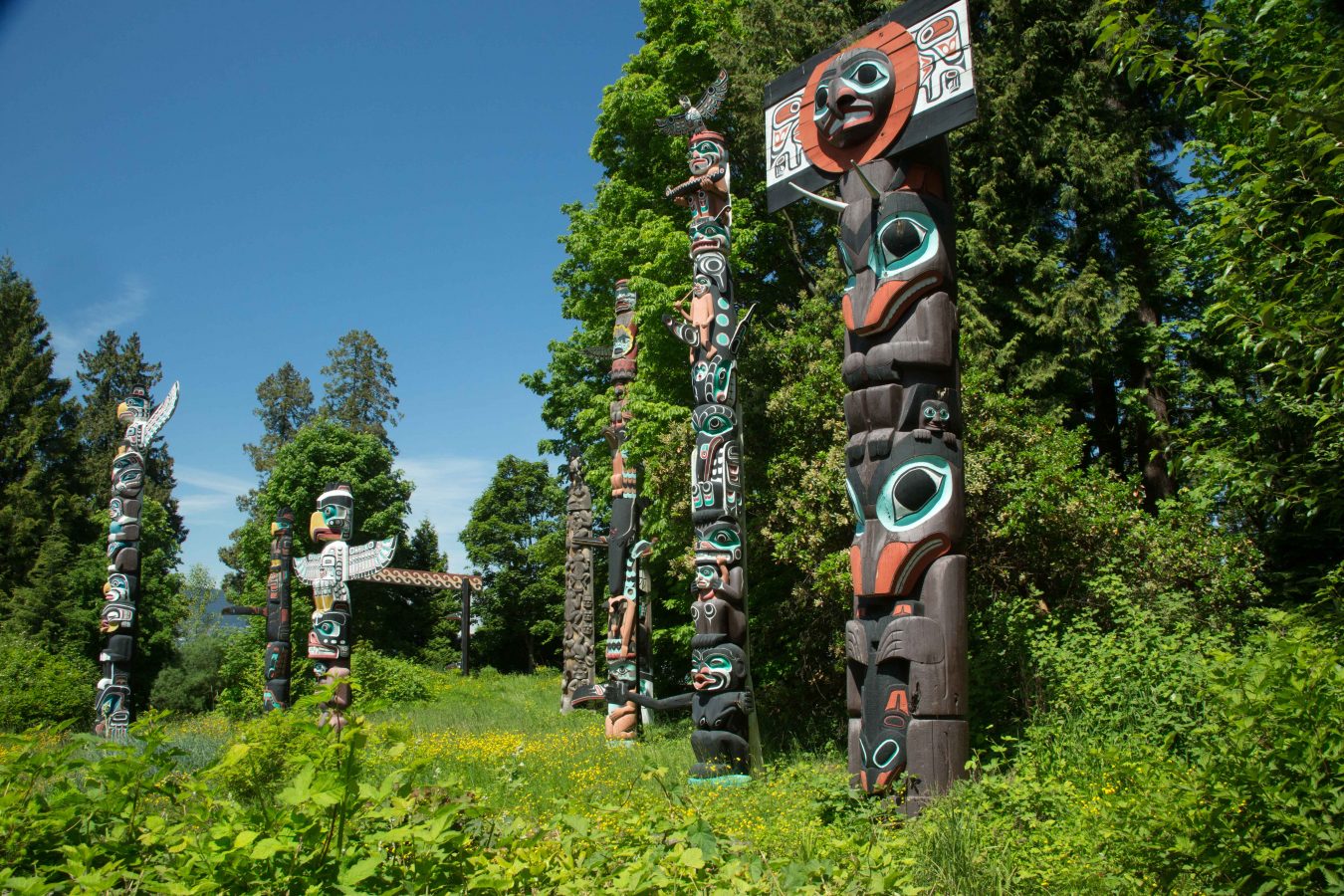 What do hidden treasure, a Scottish stonemason, and a pint of Guinness have in common? They’ve all played a role in making Stanley Park into an enchanting, world-renowned destination.

Spanning over 400 hectares on the edge of Vancouver, Stanley Park is one of North America’s largest parks. During childhood, a trip here means visiting the Vancouver Aquarium to see colourful fish and resident beavers, or hopping on your first-ever Christmas train. As an adult, it becomes an outdoor playground, a place to strap on the rollerblades and glide along the Seawall under the summer sun.

The Musqueam, Squamish, and Tsleil-Waututh First Nations occupied this area for more than 3,000 years. By the 1860s, settlers had begun selectively logging the land, and the British Royal Engineers had declared the peninsula a naval base. In 1886, just after the City of Vancouver was born, the federal government made the massive forest a city park, taking on the name Stanley after the Governor General Lord Stanley before opening in 1888.

Deep in the forest, the often untold stories that helped make the park what it is today, sit waiting to be told. And thanks to Forbidden Vancouver Walking Tours, these tales can be discovered during its two-hour Secrets of Stanley Park excursion.

Taking a stroll along Brockton Point on the southern edge of Stanley Park, we visit a site that is green for more reasons than one. In the summer of 1942, two robbers took to the Bank of Montreal on the corner of Prior and Main in downtown Vancouver and stole $56,000. “A woman shows up to the Vancouver Police station and announces that one of the robbers was her boyfriend,” says Glenn Tkach, a guide for Forbidden Vancouver Walking Tours. “Before dying in a gun fight, he lets her know that more than half the money is buried in Stanley Park near a cricket pitch beneath heavy undergrowth. The police find nothing. And no one has ever found anything ever since.”

This has led many to believe that there is hidden treasure somewhere in Stanley Park’s forest.

Jumping on the Seawall (keep right and keep a safe distance!) means passing by several historical gems. Facing northeast and looking over Coal Harbour is the famous Nine O’clock Gun, a 12-pound naval cannon that lets off a massive boom at the strike of 9 p.m. (now 7 p.m. to support frontline workers) every evening. Cast in 1816, the cannon was a gift from England.

“It arrived in Vancouver in 1898,” says Tkach. “Prior to that, it was in Nanaimo.” The 200-year-old cannon can be heard as far away as New Westminster and occasionally, deep into the Fraser Valley. “It takes three minutes for the sound to reach Mission, which is of course a two-hour drive away,” Tkach continues. “It’s more of a tradition when it’s done now. And it’s set off with an automatic timer.”

The creation of the Seawall itself is attributed to a Scottish immigrant named James “Jimmy” Cunningham. Cunningham spent 32 years breaking his back moving massive granite rocks down to the waterfront, cutting and forming them into the outer Seawall. “He could be found at all hours of the day or night, legend has it, working on that Seawall,” says Tkach, describing how construction began in 1931. “Great stretches of it really were formed single-handedly. Sometimes, he was out there in his pyjamas.”

During the Great Depression, Cunningham employed young men who were desperate for work. “Hundreds of men worked for a dollar a day.” But he also had an agreement with the naval base: “Sailors who were caught coming home in the wee hours after a wild night in Gastown were sent over to Cunningham’s the next day in the form of free labour—which is not the kind of work you want to do on a hangover,” Tkach says.

The stones for the Seawall were sourced from all over, but what Tkach finds most interesting is that some came from an East Vancouver graveyard. “He persuaded Mountain View Cemetery to donate broken or unused tombstones for the project, so at random places here and there, you were actually walking over grave markers of the dead,” he says. “Still to this day, there are grave markers and tombstones in there.”

Cunningham died before the Seawall’s completion, but now there is an annual James Cunningham Seawall Race that commemorates his innovative idea to create a family-oriented space along the water.

Heading northwest along the Seawall, spot one of the most prized man-made gems in Canada: the Lions Gate Bridge. The 473-metre structure takes us back to 1927, when a renowned Vancouver engineer, Alfred James Towle Taylor, approached the City of Vancouver with plans to build a bridge connecting the hills of West Vancouver and downtown. Taylor’s plans were not very well received by the general population, though, who voted against the bridge construction as it meant carving roads through the beloved park.

“After his initial attempt to get the bridge built, he more or less stormed off huffing and puffing to Britain,” says Tkach. There, Taylor began schmoozing with the elite population, including the Guinness family (yes, that Guinness). They eventually formed the British Pacific Properties Ltd., and Taylor then returned to West Vancouver with a little more clout (and maybe a hangover), diving headfirst into the second proposal for the bridge development in 1930.

Today, with the help of the Guinness family (after purchasing most of the lots on West Vancouver’s slope, naming it the British Properties), the Lions Gate suspension bridge is an Historical Sight of Canada. Many have admired the bridge for its beauty in fitting right into the natural landscape—thanks to its emerald green colour—and it is said that since Taylor’s death in 1945, a bit of his legacy lives on in the structure. “Nobody knows which of the two, but one of the lions contains a box of paraphernalia,” says Tkach. “Next to his baby shoes, there are his journals going over all the drama to get the bridge built.”

Turning back to Brockton Meadows, tall totem poles stand, crafted by Indigenous artists from nations such as Alert Bay, Haida Gwaii, and the central coast River Inlet. Starting in the 1920s, the totem poles were placed here by the Vancouver Park Board with the hopes of re-creating a sense of Indigenous settlement, having displaced the area’s original inhabitants.

There were Indigenous villages throughout Stanley Park, Tkach notes.

“The greatest one was Whoi Whoi,” he says, adding that another community at Brockton Point was notable for its mixed-race population. “Portuguese Joe was a member of the community, and lots of other European settlers integrated with the First Nations community, rather than trying to colonize them.”

In the 1800s, settlements of more than 100 First Nations people still resided in what is now Stanley Park; by the 1930s their remaining inhabitants had been deemed “squatters” by the city’s park board, and all but one evicted. Though Stanley Park is a defining part of Vancouver, it should not be forgotten what it has meant to those who were here before European settlement. Take a moment to admire the craftsmanship of the totem poles, with their intricate details and bright colours.

Spilling out onto the Pacific Ocean, Stanley Park’s wild forest is a locus of adventure and admiration. Lined with multiple beaches and an outdoor pool, home to the high-society Rowing Club, Tea House, and musical Malkin Bowl, it will continue to help form memories for generations to come. But the stories of how this place came to be should not be forgotten—because it is often these overlooked histories, hidden amid the trees, that are the ones worth listening to.

This story from our archives was originally published on Jan 17, 2018. Forbidden Vancouver Walking Tours will restart on July 1. Read more Community stories.