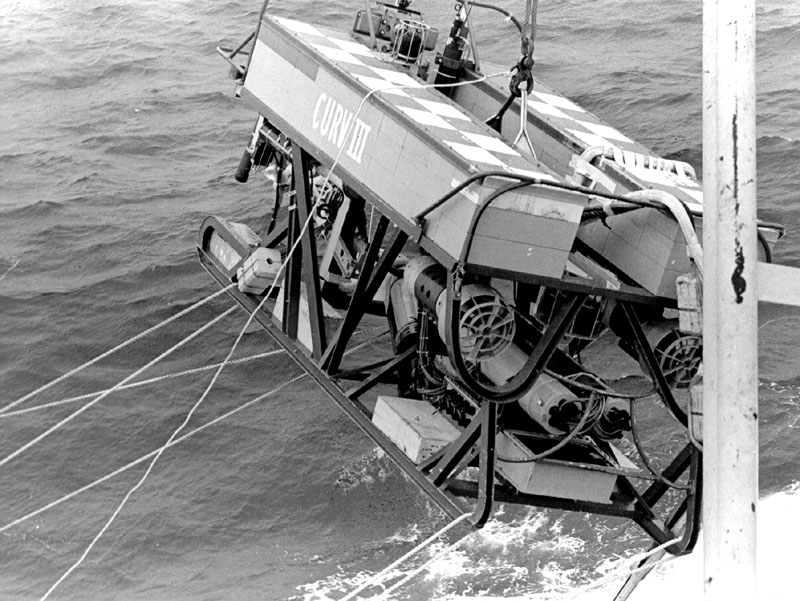 The CURV-III submersible played a key role in the dramatic rescue of the Pisces III, as told in The Dive. Courtesy of the Naval Information Warfare Centre Pacific.

In his new book The Dive, award-winning journalist Stephen McGinty reconstructs the minute-by-minute race against time to locate the submarine Pisces III and execute the deepest rescue in maritime history. In this excerpt, McGinty tells the story of how the Pisces was first built and tested by three Canadians, one of the country’s greatest contributions to maritime technology.

The Pisces submarine, which would revolutionise undersea work, was invented by three divers from Vancouver, so casual in their appearance as to be dubbed the ‘T-shirt boys’ and who tested their invention, unwittingly, in the exact location and time where the US Navy were deploying anti-submarine torpedoes. Pisces is therefore a testament both to the success of the T-shirt boys’ design and the failure of the US Navy’s new prototype to seek and destroy her.

Al Trice was softly spoken and in the early 1960s looked like Steve McQueen. A native of Vancouver, the pipe-smoking Trice had been introduced to scuba diving, then in its infancy, by a former British Navy frogman and was quickly hooked. At the time commercial divers dismissed the aqualung as ‘mouse gear’ and its aficionados as ‘frogs’, preferring the heavy steel helmet and fixed oxygen line of traditional ‘hard-hat’ diving’, but Trice became a master of both systems, able to switch comfortably between the two depending on the nature and demands of the job. It was a versatility that was to make him popular with contractors and earn him a reputation as one of the most respected divers on the Pacific Coast.

Don Sorte was six foot two, with rugged good looks and an ill-fitting toupee that he liked to hurl onto the dance floor when particularly invigorated by a nightclub soundtrack. He had three poodles, each dyed a different colour—rose, blue and yellow—and each answering to ‘Tiger’, a novel nomenclature that he believed saved time. Call one name and all three came running. In the early days of scuba, Sorte was paid by police to retrieve accident victims from the depths but warned not to pick their pockets—they needed the wallets for identification. A move into commercial hard-hat diving was more lucrative, enabling him to eventually commission a self-portrait in which he is seen genuflecting to a giant dollar bill.

Together Trice and Sorte worked as a team on deep dives, and it was the Barge 10 accident that convinced them of the need for a commercial submarine capable of safely working at extreme depths. In 1964 the barge, loaded with heavy bunker oil, had sunk to a depth of 330 feet, and its retrieval was then considered the deepest salvage operation in the world. Trice performed the first solo dive to survey the scene. This was to be the first of dozens of highly dangerous ‘bounce’ dives that involved spending as little time on the bottom as possible, followed by a long, slow and arduous ascent to the surface, then hours in a decompression chamber. At 300 feet the amount of nitrogen—from the air breathed from the aqualung—forced into the blood stream by the atmospheric pressure of water has the equivalent effect of downing four or five large Scotches, and divers could do stupid things while ‘drunk’ or ‘narc’d’ on nitrogen, including taking off their aqualung. By the end of the salvage job Trice and Sorte were spending as little as 14 minutes actually ‘on site’, and Trice knew there had to an easier, safer solution. Why couldn’t a submarine do these jobs? 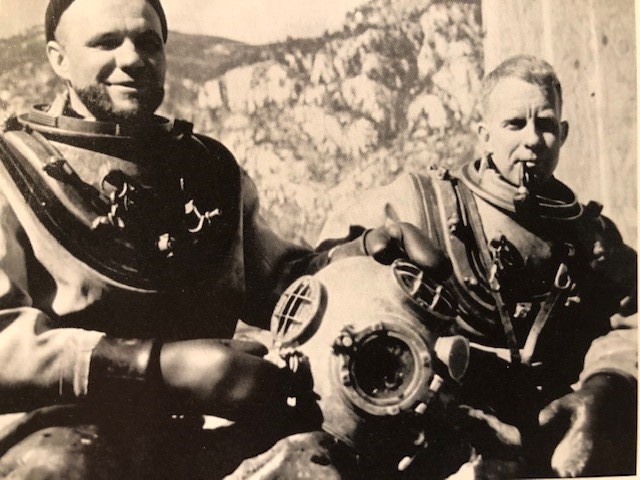 Divers Don Sorte and Al Trice, the pioneers of the Pisces submersibles. Courtesy of Al Trice.

The reason, in 1964, was that commercial salvage submarines didn’t exist. The nearest equivalent was the Denise, the small submarine used by Jacques Cousteau and launched from his support vessel Calypso. Cousteau and his ship had been travelling along the US West Coast that year, and the extensive TV and newspaper coverage that followed in the wake of the French undersea explorer had caught Trice’s attention. Then there was the Trieste, designed by the Swiss scientist Auguste Piccard, which in 1960, piloted by his son Jacques and the American Don Walsh, reached the bottom of the Challenger Deep, a trench in the South Pacific over six miles deep. Yet despite its world-record-breaking achievement, the Trieste was unsuitable for any kind of commercial work, so Trice concluded that it would be necessary to build what he could not buy.

On a road trip inconceivable today, in our world of corporate secrecy and nefarious industrial espionage, Trice and Sorte drove down the length of California stopping off at the research laboratories of America’s leading companies—Lockheed Martin, Westinghouse Electric, General Dynamics and General Mills—each of whom were developing their own portable submarine but were generous or foolhardy enough to show round what they saw as a pair of enthusiastic amateurs in sneakers and scruffy T-shirts, rather than dedicated competitors. At Lockheed’s aerospace research centre the pair were even treated to a demonstration of a moon buggy five years before Neil Armstrong and Buzz Aldrin would put one to use. Yet although inspirational, the visits revealed no key secret beyond Trice’s conclusion that the final design had to be small enough to fit in the hold of a cargo plane and a small- to medium-sized support vessel.

On the road home the pair stayed with friends in Seattle, where they met the other figure in what was to become their subaquatic troika. Mack Thomson was a nudist and amateur diver, devoted to technical journals in the way other men were to Playboy and Sports Illustrated. He had made his own drysuit by stitching the plastic material harvested from baby mattresses onto a pair of thick long johns, and although he paid for a second-hand oxygen tank, he had built his own regulator. On one dive he experimented with attempting to surface at speed by using compressed air to blow up his suit, an unwise idea that introduced him to the ‘bends’, the painful and potentially fatal condition when bubbles of air form in the bloodstream.

Thomson had studied Auguste Piccard’s designs and was aware the cabin had to be the heart around which everything else was constructed. He also had a friend, Warren Joslyn, who worked as a stress engineer at Boeing and who, after initially describing their plan as ‘impossible’, then set about proving himself wrong. It was Joslyn who produced the engineering specifications for a design centred around two spheres, the larger of which would house the crew and their equipment. A sphere was capable of achieving the most equitable distribution of the ocean’s pressures, and Joslyn was confident his design could reach depths of 1,650 feet (500 metres). The figure laid down by the US Navy for any private commercial submarine operator who wished to bid for contracts retrieving torpedoes from test ranges was 1,970 feet (600 metres). If it could reach 500 metres, it could surely go to 600 metres.

Vancouver Iron and Engineering built the spheres for $50,000, and they were then moved to an empty back room in a mushroom cannery, with the ‘rent’ paid in sweat as all three helped to load crates of tinned mushrooms onto delivery trucks. When Thomson designed a part, Trice would deliberately drop it onto the cannery’s concrete floor; if the part was robust enough to survive the drop they moved on to the next stage. Shortage of money forced the team to be creative. The carbon dioxide scrubbers, for instance, were powered by a small motor liberated from a Singer sewing machine that belonged to Thomson’s wife.

The initial plan—to build the sub in three months on a budget of $20,000—was impractical. Fifteen months and hundreds of thousands of dollars later, Pisces had yet to touch the water and when first introduced to her new environment the sub did not float level. The tail was too heavy, a problem finally solved by packing in fishing floats to increase her buoyancy. Communication was also a problem. Radio waves won’t pass through water, and, while sound waves can carry for hundreds of miles, they refract and bend as they travel. The team discovered that the support ship Hudson Explorer had to be directly above Pisces to ensure comprehensible communication as the refraction was minimal on the vertical plane. Despite all these issues, Pisces was finally ready for an open-water trial at depth.

The decision to test their submarine in a missile range was not deliberate. The Strait of Georgia was an open body of water close enough to the port of Vancouver for ease of access, and from there the Hudson Explorer and Pisces moved to the Jervis Inlet, which offered the necessary depth. On arrival on a December morning in 1966 the team discovered a US Navy vessel was firing anti-submarine torpedoes, and although the captain was unwilling to cancel the tests to accommodate a few commercial divers and their miniature submarine, he agreed to what both teams considered a clear distance; to take a break during their descent and to alert the crew of the Hudson Explorer when a torpedo was in the water. To ensure safe passage Mack Thomson, the test pilot, also wore his lucky ‘007’ James Bond sweater, although the descent would test the nerves of even the most seasoned secret agent.

Communication was patchy, but at 660 feet word came down that a torpedo had been fired and that he should switch off all equipment, so in nervous silence Thomson, who even closed his hand over his wristwatch to silence the ticking, listened as the sound of the projectile drew ever closer—then passed on by. Only then did he continue the descent on a test dive. The troubles continued: one of the two smaller 16-inch compartments used for ballast and trim control imploded due to the pressure at 1,400 feet, he struggled to release the drop weight and when he finally surfaced hours later than planned, the Hudson Explorer struggled to find Pisces in the dark. Yet despite its troubles, they were all considered fixable, and the submarine’s test dive was viewed as a success.

It would not be long before Vancouver’s T-shirt boys could sail into the open market as the proud inventors of the most affordable and versatile miniature submarine in the world.