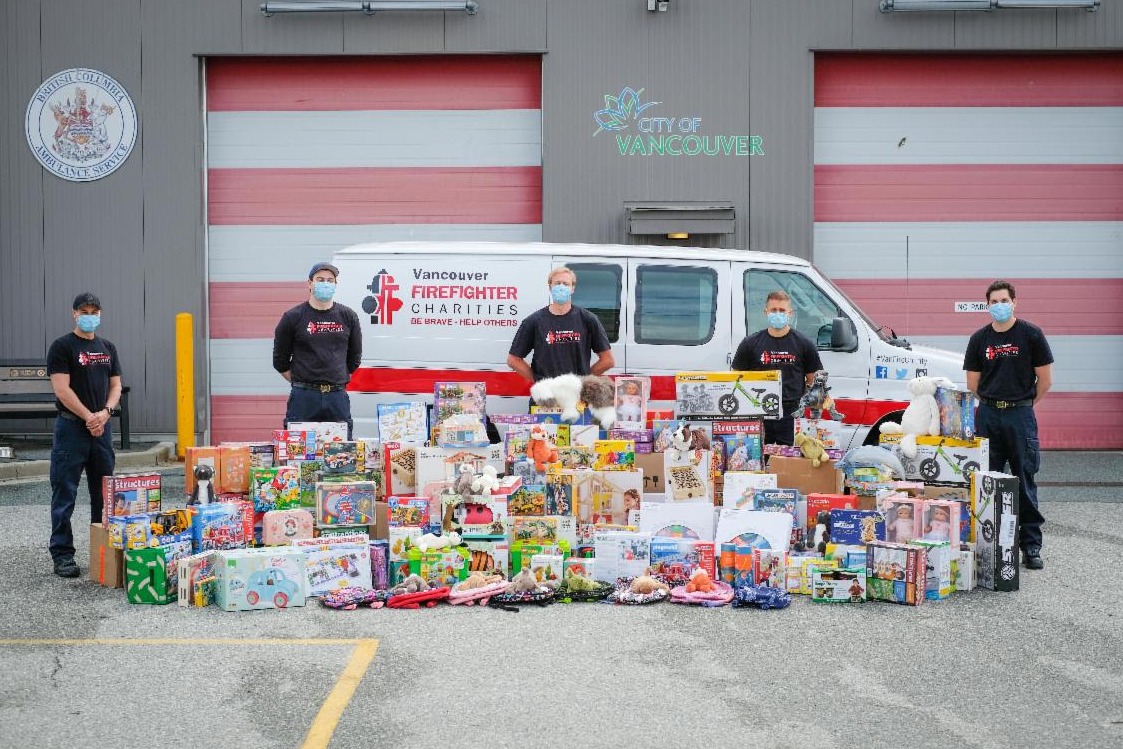 As if firefighters didn’t do enough for us already—first responders to 911 calls, willing to run into burning buildings to save us—it’s clear the desire to help others runs deep in this calling. Take the latest initiative from the Vancouver Firefighter Charities (VFC): it has moved up spending for its annual holiday Toys for Kids program from the usual winter months shopping spree to now, to help local businesses struggling with loss of income from the COVID-19 crisis.

“This year we recognized that a lot of our local businesses were struggling from the fallout from the pandemic, and that it would be a worthwhile and noble effort to support them through this,” says James Docherty, full-time firefighter in Vancouver’s Chinatown and volunteer executive director of VFC. 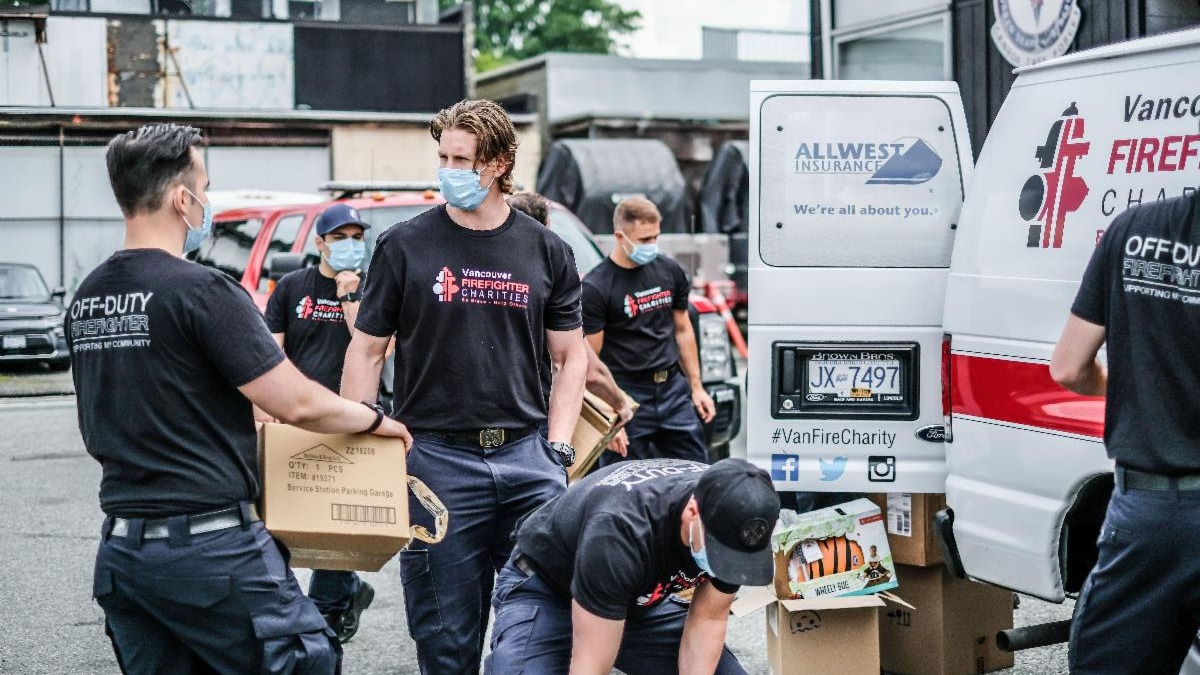 “We identified some local toy and sports shops that have been excellent stewards in the community—they’ve consistently given back, whether it’s been toys, sponsored sports teams, et cetera—and we’ve gone out and purchased a little over $65,000 worth of toys and sports equipment that’s going to be given out to families in need in time for the holiday season.”

Though VFC has been involved with holiday toy drives for over a decade, it launched its own Toys for Kids initiative in 2016. It is just one of several children and seniors’ programs run by VFC, and generates around $100,000 of gifts each year alone. Like the other programs, it is funded via a combination of peer donations from the 800 unionized Vancouver firefighters (Docherty says 87 percent of union members give their own money), gifts from the Lloyd and Elsie Campbell Foundation and Vancouver Foundation, and direct donations from the general public. Because it is volunteer-run, and members are scrupulous about making every dollar count, VFC keeps overheads to a minimum; according to Docherty, the last fiscal year saw just under 6 per cent administration and operating costs.

“We really work hard to make sure we get the maximum value we can back to the community,” he notes. “We want to make a tangible difference.” 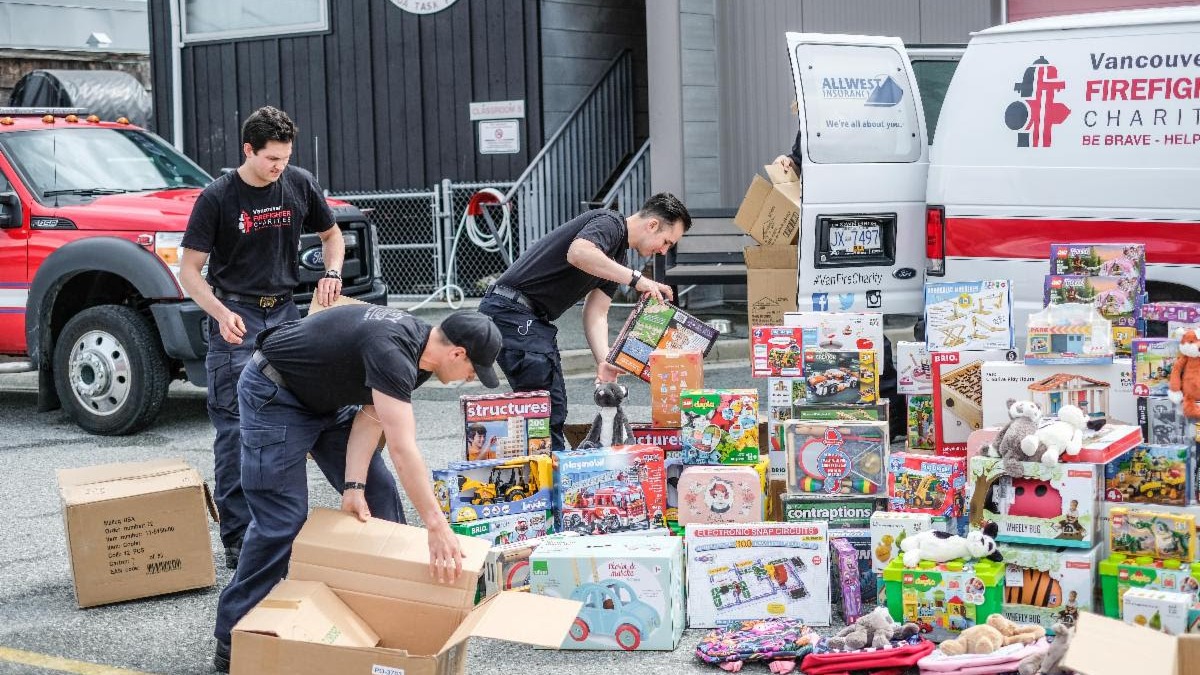 Though the charity has worked with big box retailers in the past, benefiting from the ability to generate more toys for the same dollars, Docherty—who took over as executive director in January 2019—says that VFC has switched the premise of the program to focus more on quality gifts. Through a partnership with the Lower Mainland Christmas Bureau, needs of specific families are taken into account.

“With the smaller businesses, we’re not looking to make the best deal to get the most toys,” Docherty explains. “We’re looking at getting quality toys and sports equipment that are going to benefit families in need—and not end up in the trash.

“We re-evaluated our program to look at what kids really want and we see that a toy for a younger child might be $20, whereas an older child or teen gift could be upwards of $200.”

Anyone interested in donating to Toys for Kids or one of the other programs (Snacks for Kids helps to feed 2,500 children across 50 Vancouver schools, for example) can do so directly through the VFC website. Docherty is hoping to raise more than $100,000 for this year’s toy drive, and is also busy preparing to ramp up the school-based programs once the Vancouver School Board is running at full tilt again. Meanwhile, VFC is keeping busy.

“We are small and able to pivot quickly, and that’s something we are really proud of,” says Docherty. “When this COVID-19 crisis hit, we were able to react very fast—almost instantaneously—when things started shutting down. We were able to start giving out hampers, gift cards and care packages to Vancouver’s most vulnerable. Our people love helping other people and we have been able to keep doing that over the past three months, without any gaps in our service.

“I grew up in Vancouver,” he adds. “And it’s very humbling and an honour to work with people every day who truly do wonderful things.”