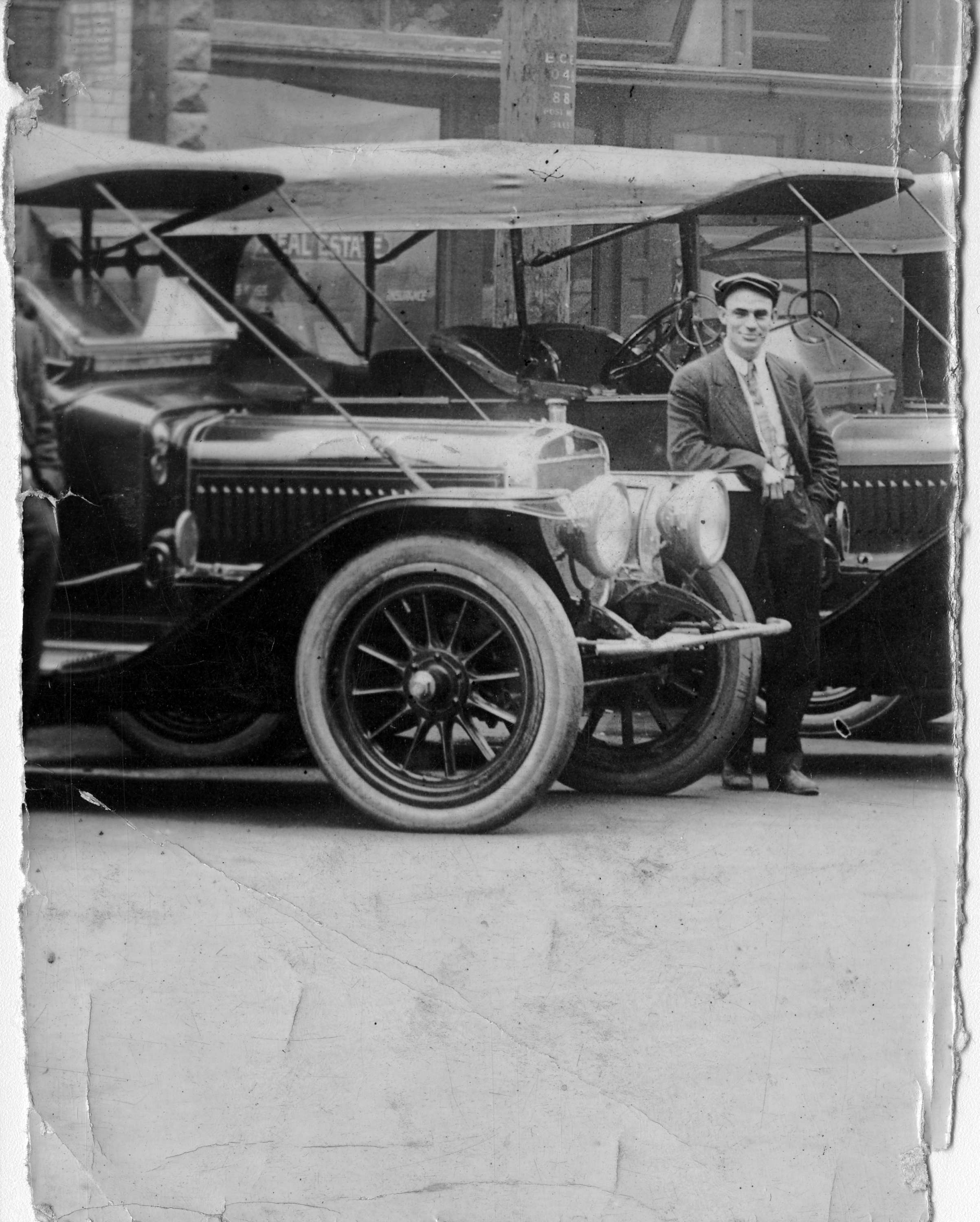 Harry Hooper standing beside a car, 1911. Photo courtesy of the City of Vancouver Archives.

Harry Hooper’s hunger for speed drove him to court many times. He raced bicycles along Vancouver’s unpaved streets—and was fined $10 for reckless “scorching.” The arrival of the first horseless carriage allowed “Handsome Harry,” as he called himself, a chance to display his leadfooted daredevilry. Why, the speeding scofflaw was once clocked going 30 miles-per-hour (48km/h) when the limit was eight (13km/h). The newspapers named him “Lightning Harry.” 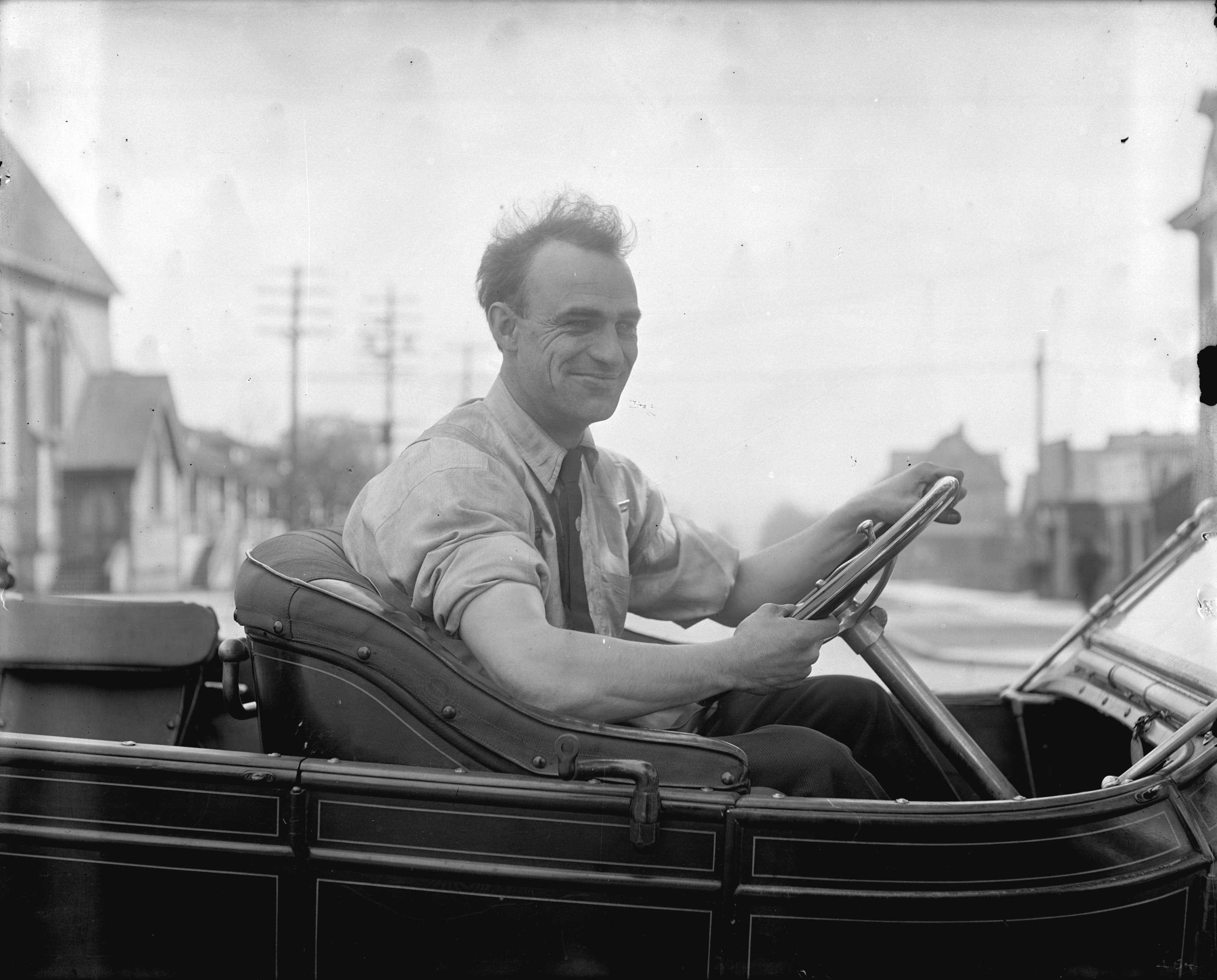 Handsome Harry Hooper in car, 1910. Photo courtesy of the City of Vancouver Archives.

Hooper was hired as a chauffeur by a railway magnate. Later, when he came into an unexpected inheritance, he purchased a fleet of automobiles to form Harry Hooper’s Auto & Taxi Co. Ltd. Hooper, who was not averse to telling a tall tale, claimed to be Vancouver’s first taxi driver (a possibility) and first owner of a taxi company (not likely). In any case, those drivers soon-to-be-offering ridesharing in the city can trace their roots to Handsome Harry.

A headstrong fellow with a gift for self-promotion, Hooper hustled all his life. Around 1903, he drove a coughing, sputtering, two-cylinder Ford Model A Runabout. While in the employ of John Hendry, president of the Vancouver, Westminster and Yukon Railway, he piloted an Oldsmobile in the first motor tour around Stanley Park. Eleven cars started yet only five finished the 12-mile (19-km) route with Hooper coming second. In 1910, Hooper carried a letter from the Daily Province newspaper to Seattle, setting a land record by covering the distance in 10 hours, 21 minutes. He then broke his own mark by completing the return journey in 9 hours, 12 minutes. 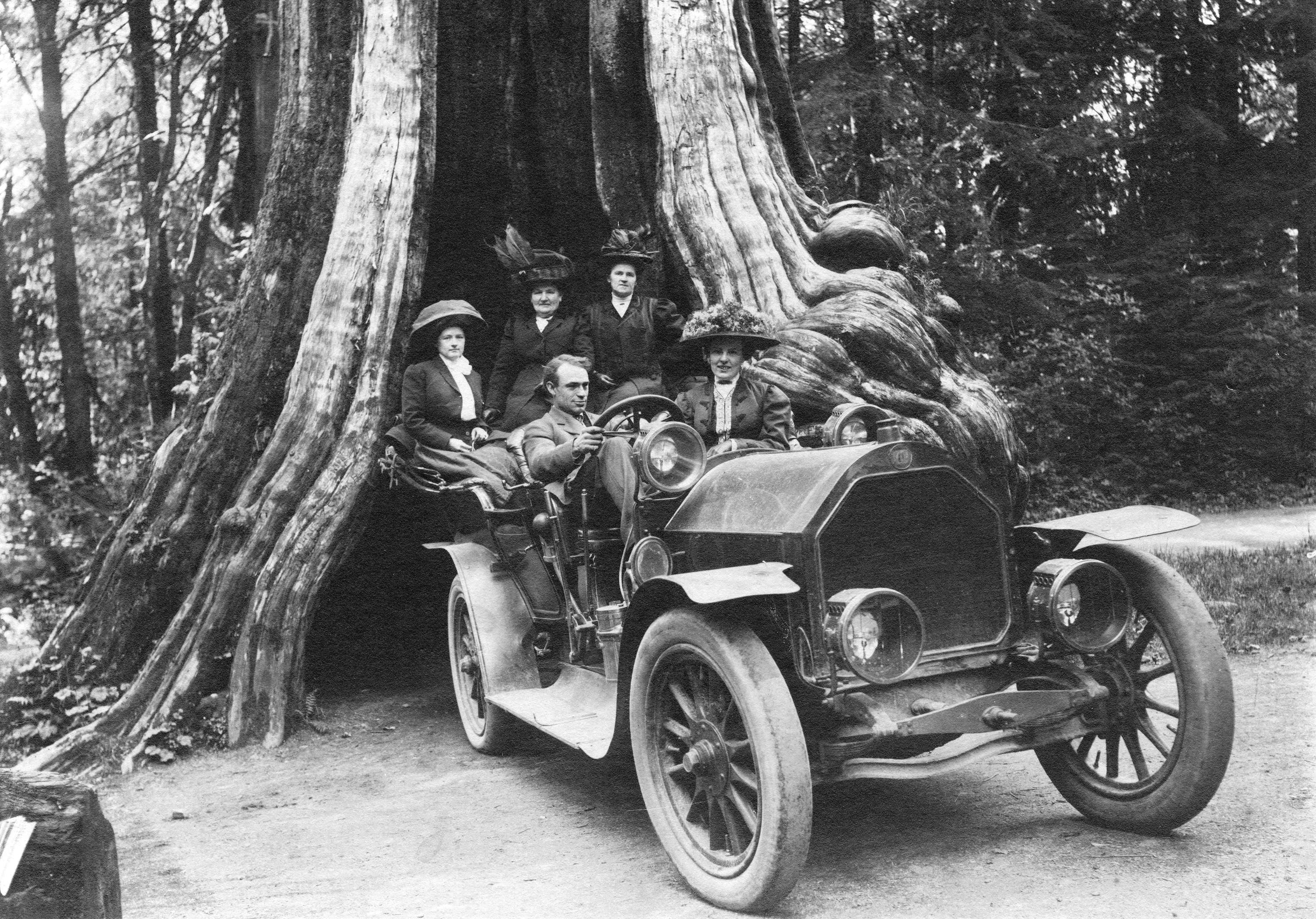 Harry Hooper and his sightseeing car in front of the Hollow Tree in Stanley Park, 1910. Photo courtesy of the City of Vancouver Archives.

Hooper raced cars for more than 30 years, beginning with an air-cooled Franklin on Hastings Park’s half-mile dirt track where—for a day—one-horsepower thoroughbreds were replaced by 12-horsepower vehicles. In 1919, Hooper raced a Stutz Bearcat owned by R.J. Duncan, managing director of the Vulcan Iron Works, against a newfangled flying machine in an exhibition at Minoru Park in Richmond. The car, nicknamed the Vulcan Kewpie, narrowly lost to a biplane in a running start along a length of a Hastings Park straightaway. 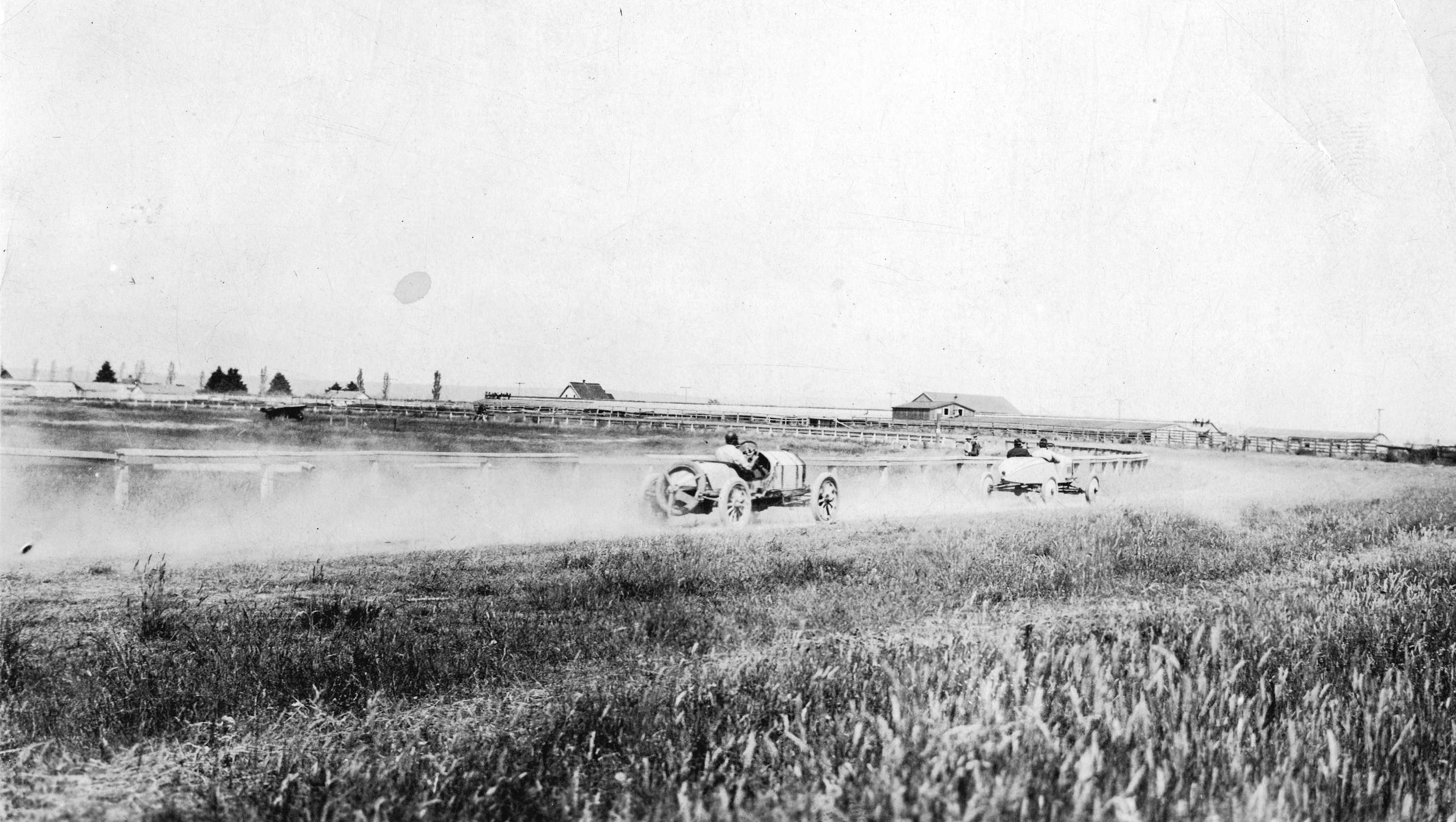 Harry Hooper in the last car at the Brighouse Racetrack, 1911. Photo courtesy of the City of Vancouver Archives.

Despite his many legal infractions, Hooper was hired by the Vancouver Police Department and soon enough he was racing fire engines, dispatch cars, and arrest wagons through city streets. Eventually, he was lured up the Fraser River in search of gold and the kinds of riches unavailable to a mere taxi driver.

Hooper spent the hard Depression years homesteading in the Cariboo, hunting deer and moose, growing fruits and vegetables, fishing for trout and sturgeon. He planted and ground his own wheat. He declared himself “too tough for a grizzly bear to tackle.”

Dressed in moccasins and a fringed buckskin suit of his own making, Hooper returned to the city after the outbreak of war in 1939. He claimed to have been rejected for service by the air force. Instead, he sought recruits to join him along the Fraser River north of Williams Lake between Soda Creek and Dog Creek, where he insisted fortunes were to be made. “Don’t let anyone kid you—the gold is still there,” he said. 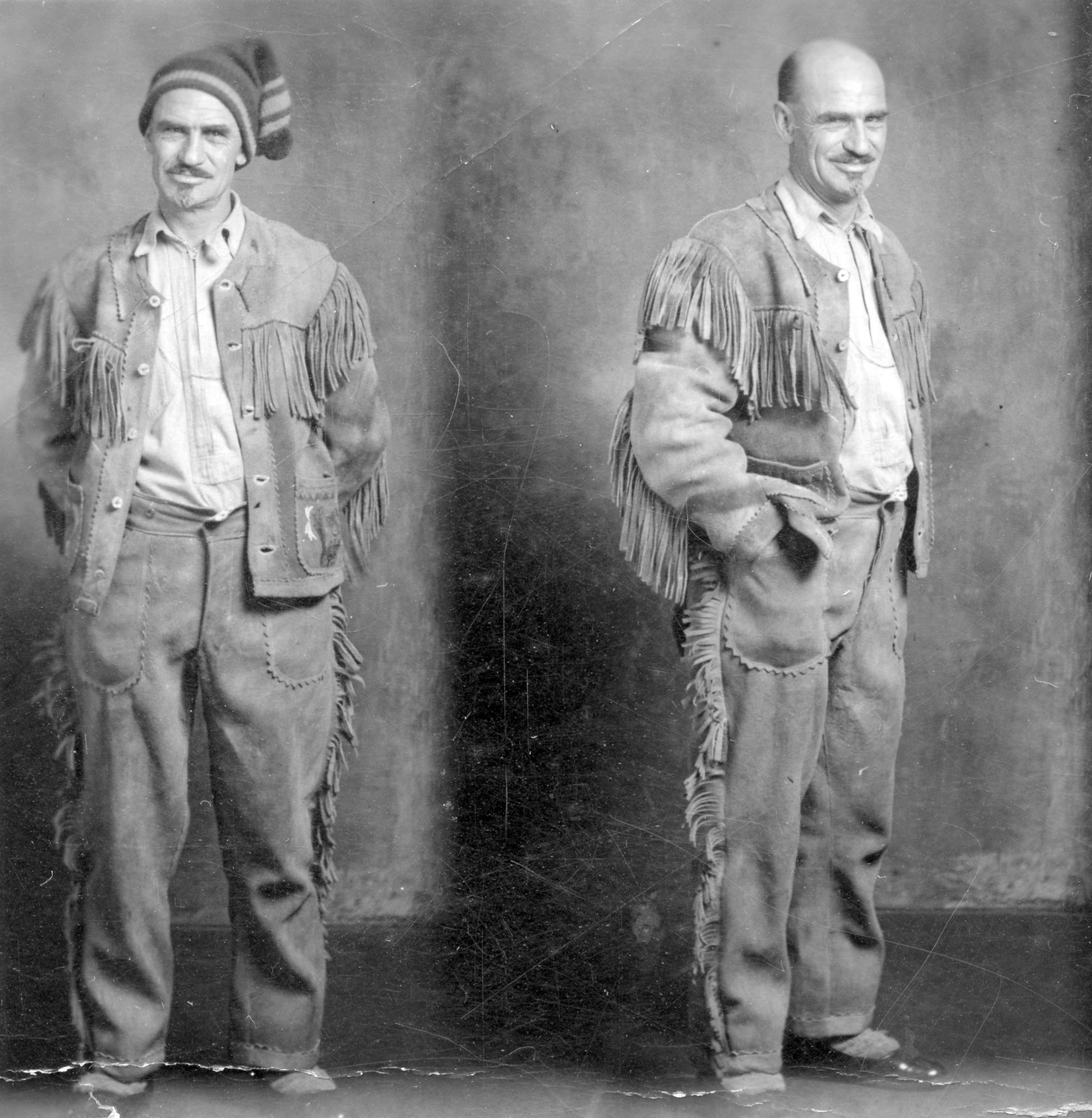 Harry Hooper in studio. Photo courtesy of the City of Vancouver Archives.

He had few takers for his placer-gold scheme, forcing him to abandon his primitive freedom for life in the city. He took a room at the Abbott Mansions, a name grander than the quarters on offer, while labouring during the war as a shipbuilder. He sold carnival tickets and worked as an elevator operator, earning extra money by touring parks, pools and movie houses to show off tricks performed by his dog, Dirty Face.

Hooper was ordered to retake a driver’s test in 1953, a decision he considered a humiliation. “After 50 years without an accident, this happens to me,” the 72-year-old driver complained.

He died alone in a cheap office room he was using as a residence. With no relatives in the city, his body was donated to the anatomy department at the university. 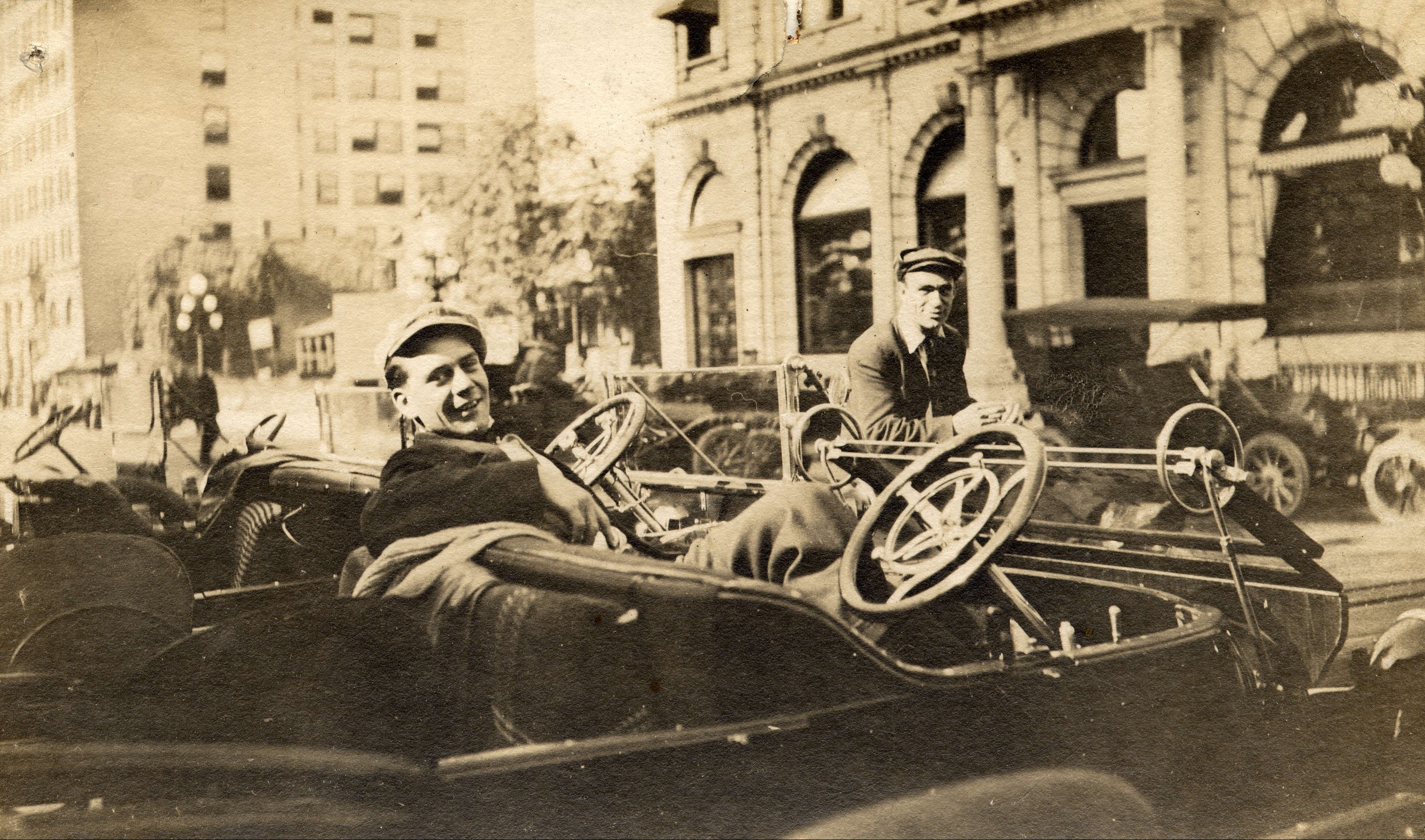 Harry Hooper in his taxi on Hastings Street, 1910. Photo courtesy of the City of Vancouver Archives.

Taxi driving attracts eccentrics, fabulists, and strivers seeking the independence of self-employment. A hack in Victoria constructs crosswords for the New York Times when not ferrying passengers. W.P. Kinsella, too, drove cabs before conjuring his Hobbema stories and a tale about Shoeless Joe Jackson. May those who offer ridesharing lead lives half as interesting as Handsome Harry’s.