In her new book, Hand Drawn Vancouver: Sketches of the City’s Neighbourhoods, Buildings, and People, artist Emma FitzGerald takes an intimate and detailed look at our city, with more than 100 sketches completed on location. From the majestic seawall to the everyday buzz of city life, she captures the essence of Vancouver and its neighbourhoods with colour and humour. Here is an excerpt from her book, reprinted with permission from the publisher, Appetite by Random House, a division of Penguin Random House Canada. 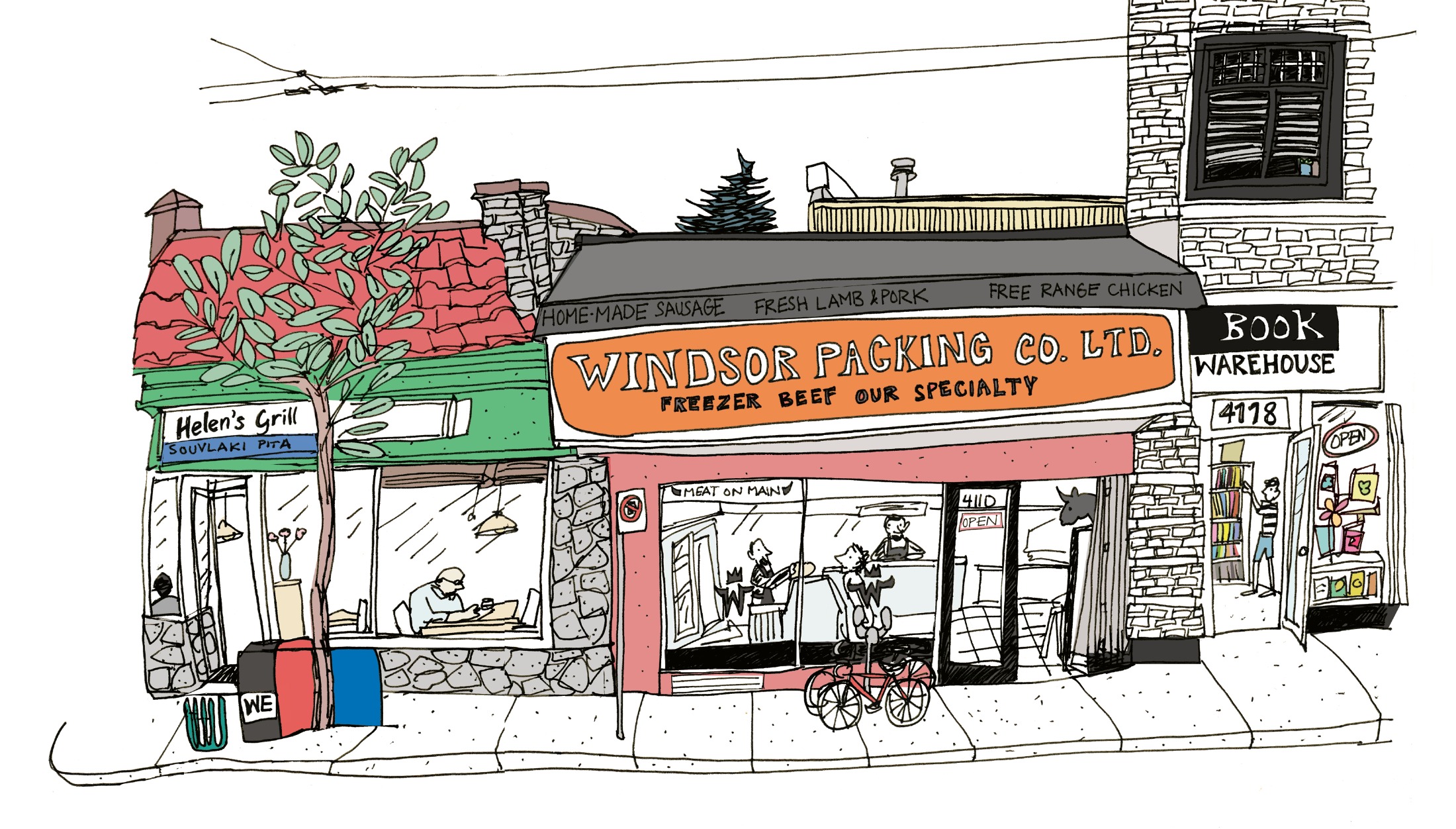 I moved to North Vancouver aged seven. I was no stranger to moving by the time we arrived, so it wasn’t a surprise when soon after settling in, we moved again to West Vancouver. Or that I later attended high school on the west side of Vancouver, all the way over two sets of bridges.

My daily commute to school, an hour each way in the backseat of the car, was an education in the geography of the city. We passed through Dundarave and Ambleside, stalled in traffic at Park Royal, went over the Capilano River reserve while crossing the Lions Gate Bridge, and then were momentarily surrounded by trees in Stanley Park. It was often a quick drive through the West End and Downtown, seemingly before anyone else was awake, then over the Burrard or sometimes Granville Bridge, through Kitsilano, all the way to Dunbar—only to do it all in reverse at the end of the day. Looking out of the window, I discovered that each neighbourhoood had its own unique architecture and population, and they became endlessly interesting to me. 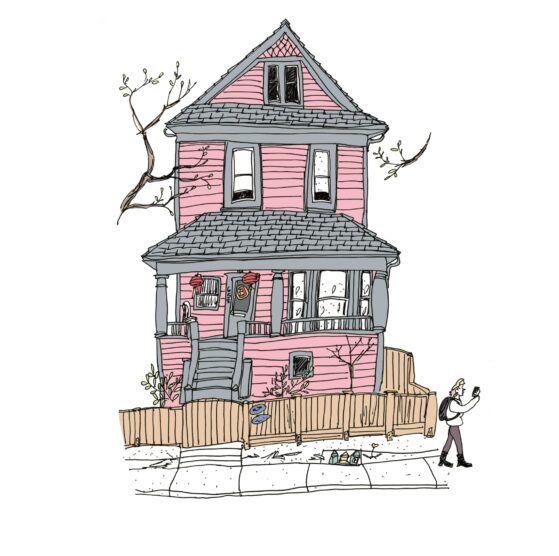 Later, while studying Visual Art at the University of British Columbia, just past Point Grey, I spent more of my free time on Commercial Drive and Main Street. I taught art classes on Granville Island and in Strathcona, and even painted a mural in Hastings Sunrise. The more I explored Vancouver, the more my understanding of it grew.

After my undergrad I moved to Nova Scotia, where I wrote and illustrated two books based there. Returning to Vancouver after 14 years of living away, I relearned the city in the process of making this book. Instead of visiting an archive, my research was conducted on the city’s streets, with pen and paper in hand. Sketching on location is a way of learning a place—not just its sights, but also its smells and sounds as the world continues its hum around me. I was drawn to places where community naturally forms, as well as the places that had left a mark on me, knowing that if they had survived the passage of time, they must be special to others as well. 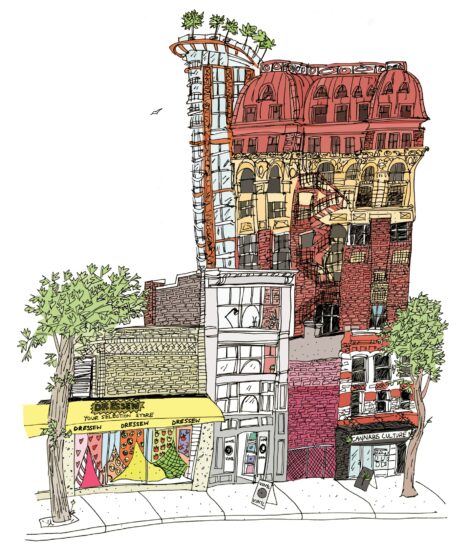 I colour my drawings later, digitally, and excavate both my notes and my memories for text. Some of the stories you’ll read in this book are from the people I’ve met while sketching, or snippets of conversation I overheard. I’ve tried my best to respect the people and places I have portrayed, and I acknowledge that any mistakes are my own. For some, Vancouver is a place you can ski and sail in the same day. For me, it’s a place I can eat a steamed bun from a Chinese bakery while watching the sunset on the Pacific, swim with harbour seals within view of the city’s glass skyscrapers, and wander through back lanes and beaches. Whether you are a visitor or resident, I hope that you see some of “your” Vancouver in this book, and take it as an invitation to make more of your own discoveries in this remarkable city.

Across the street, a woman paints the base of a condo building. She stops to make a call to the building superintendent. “I want to make sure I have the right grey.” 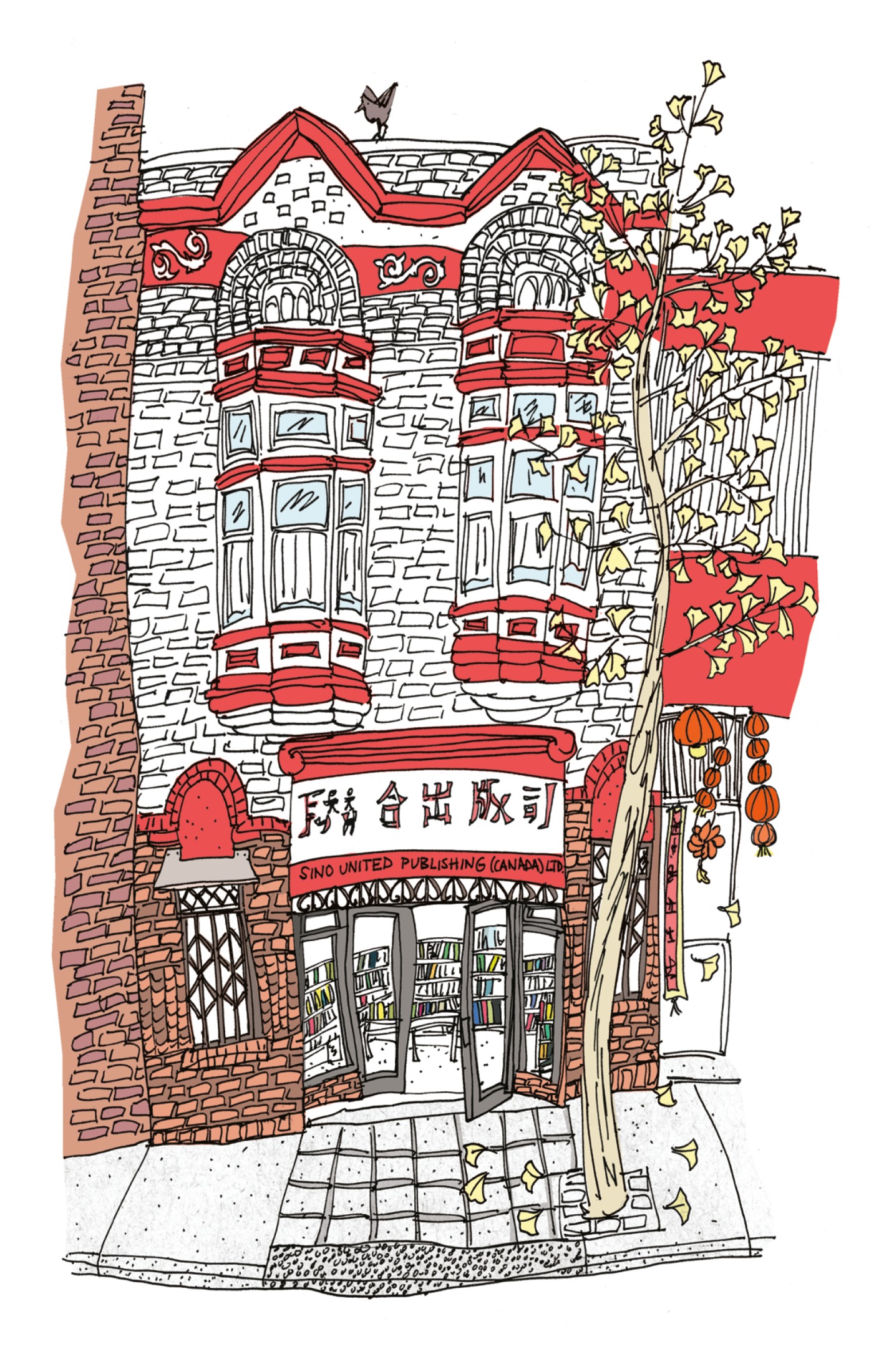 “What about me?” asks my server as I sketch at the very busy New Town Bakery in Chinatown. Then she laughs and says, “You should draw my boss, Susanna.”

She gestures to a woman in glasses behind a tower of steaming buns, kept warm in their baskets. I grin and go for it.

As she leaves to attend to another customer, I try again.

She returns, and this time she grins. “Yep, that’s Susanna.”

Nearby sits a circle of gentlemen. Their meals are long gone, but their tea and conversation are still going strong. 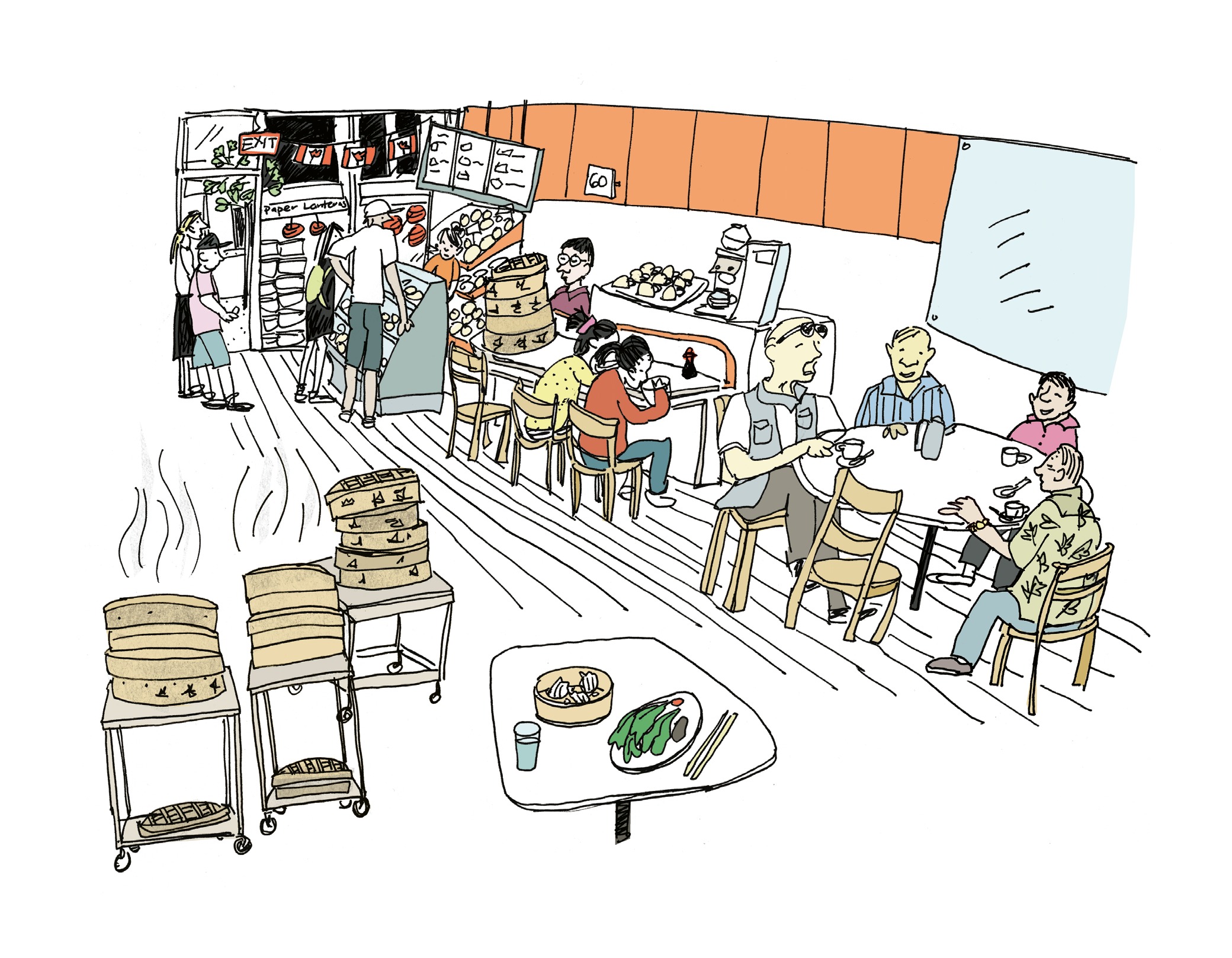 What is now Main Street and Union Street used to be Hogan’s Alley, a black community near the (still existing) train station, where many black men worked as porters on the trains. Some of the original black settlers in BC who had farmed on Salt Spring Island moved there. The neighbourhood was razed in 1970 to make way for the Georgia Street viaduct, which will also soon come down. 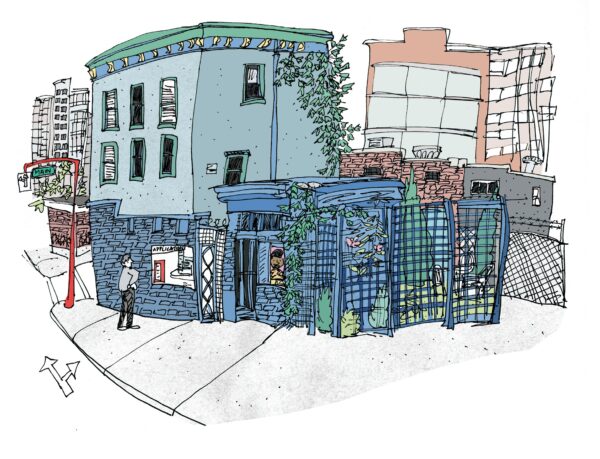 The only structures left from Hogan’s Alley are a blue building on the corner that is said to have been a boarding house, and a small brick building that was adjacent to the famous “Vie’s Chicken & Steak House” where Jimi Hendrix’s grandmother Nora used to work. Jimi used to come up from Seattle to visit. Later, there was a Jimi Hendrix shrine at the site, but both buildings were slated for demolition as I drew. In a victory for the community, affordable modular housing has since been built, named “Nora Hendrix Place” to honour her memory.

UBC campus has changed so much since I studied here in the early 2000s. It is a relief that Wreck Beach, the clothing-optional beach at the very tip of the campus, is largely unchanged. You can still find lots of bare bums, wild salmon burgers, and the nicest sandbar for skimboarding. Also remaining are the many stairs to get down and up again. I count 502. 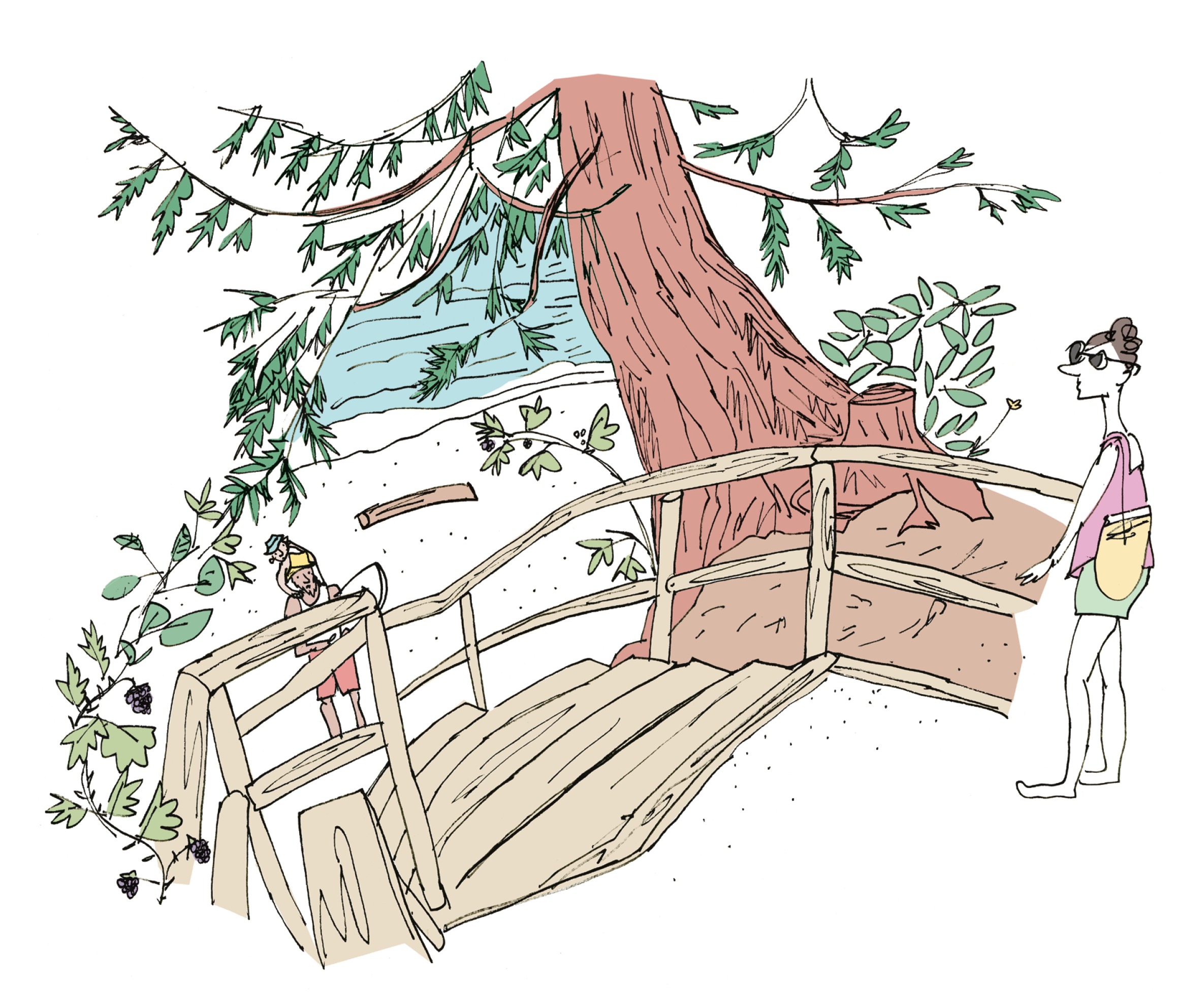 Once on the beach, people stake out their own Gardens of Eden in hammocks and even small wooden structures. My favourite place is at the base of the receding cliffs, a little ways around a point.

An airplane takes off into the sky above, reminding me of my first week living in a UBC dorm, when I woke to my clock radio and the news of 9/11. I came down to the beach often in the days that followed, to clear my head. The planes, usually so frequent, were nowhere to be seen, as air traffic ground to a halt across North America. 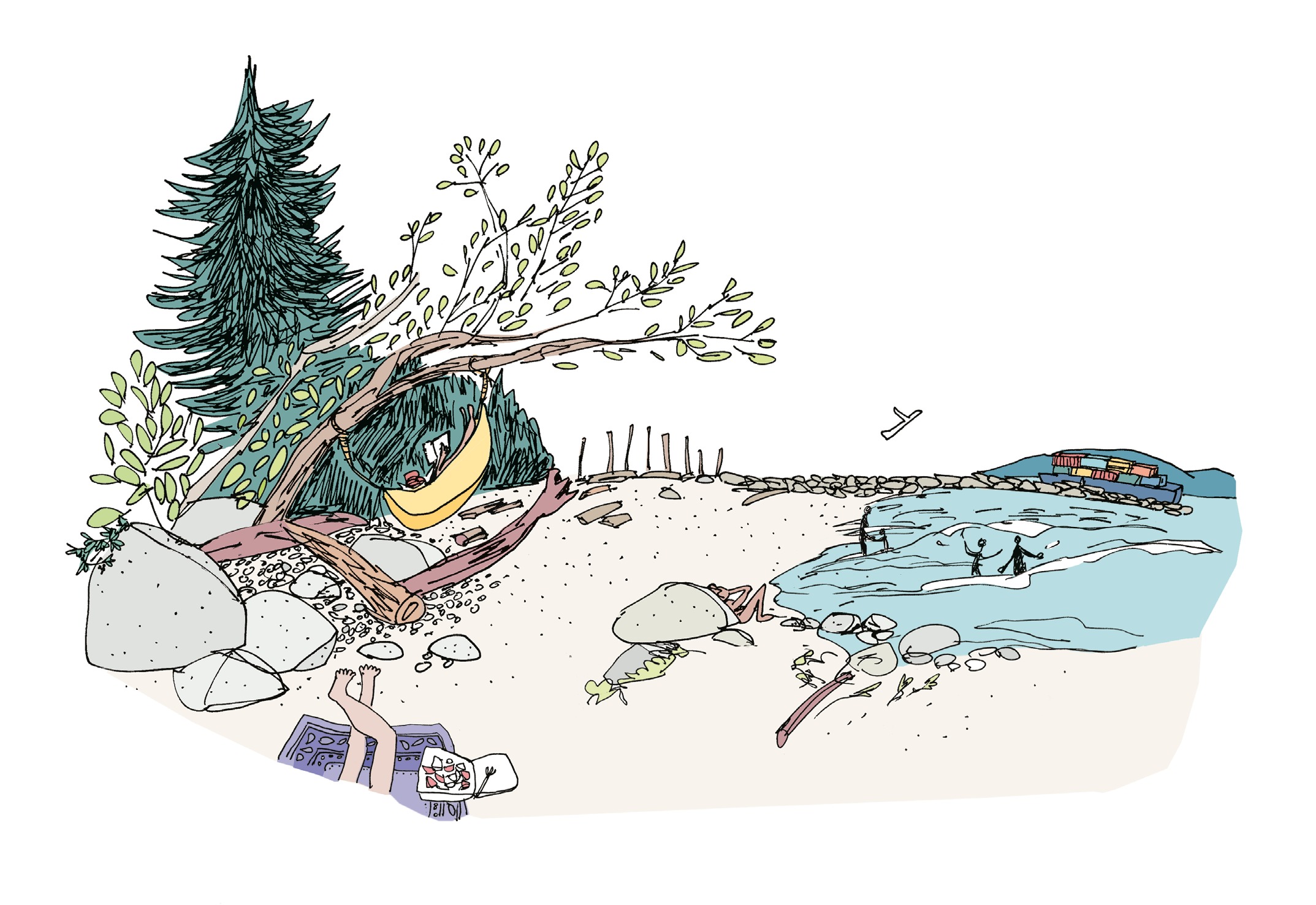