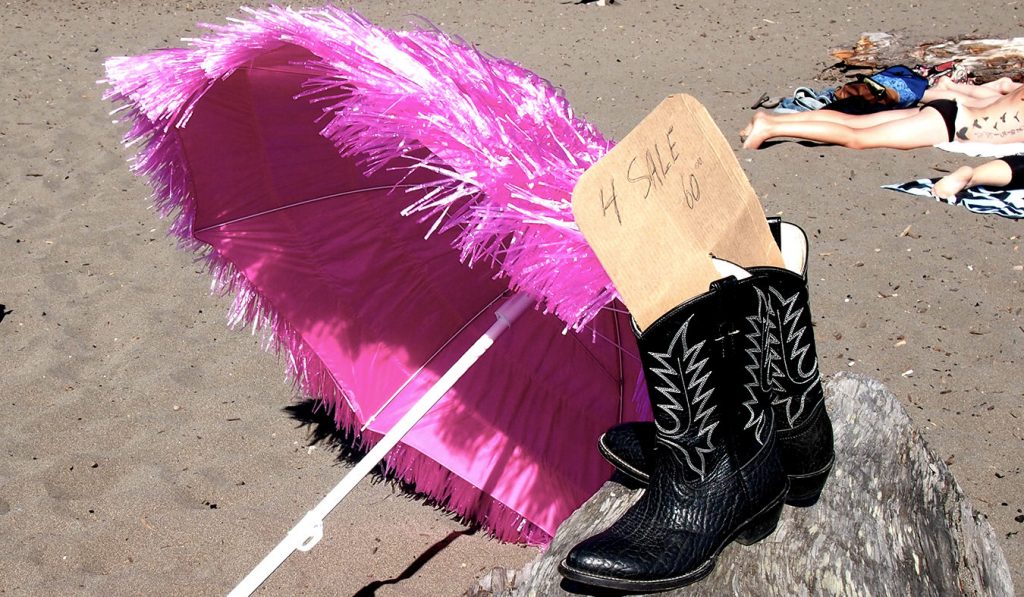 A line of cops is trotting down the long staircase that leads to Wreck Beach. Far below, whistles and bird calls can be heard up and down the beach. “Listen to that,” one cop says. “They’re signalling already. How do they do that?”

But by this time the cops know the drill. When they descend on Vancouver’s most famous clothing-optional beach they know they are essentially entering another world. That staircase is key. Without the long descent—473 stairs, apparently—and gruelling climb back up to Northwest Marine Drive, Wreck Beach would never have been able to take shape as it has, an alternate society with its own rules—pace the occasional police visit.

I wasn’t sure what to expect on my first visit. Media reports about Wreck like to mention drug use, sexual trysts in the bushes, perverts ogling naked regulars. I was expecting a certain amount of sleaze. What I found at the bottom of the stairs was Judy Williams, head of the Wreck Beach Preservation Society and the unofficial mayor of Wreck, collecting signatures for a petition (about banning jet skis I think). “The cops are good actually,” Williams said. “They were down here quickly yesterday when somebody drank too much and hurt himself badly. They’re generally pretty cool.”

At first blush the beach scene I found appeared to function as a sort of time-capsule paradise, as if the 60s counter-culture ethos had never imploded in drugs and disillusionment and the hippie Garden of Eden dream had truly come to pass. Music, food, a wide array of tie-dye merchandise, and people in various stages of undress, not unlike more public beaches, if you overlooked the smattering of exposed genitalia (which is probably the polite thing to do). Bags of trash sat at the base of the stairs for people to carry up on their way out. The vibe was more comfortable family gathering than frat party.

Rachel works on the beach. She sells sea shells by the sea shore, and coconuts too. She used to work at a cafe I frequented but no more. “I just like it better down here,” Rachel says. “What better place to work?”

The dress code is certainly more casual. Probably too casual for me—during my visit I remained one of the “textiles,” those with clothes. Fair-skinned Scot that I am, Wreck Beach will likely never be my preferred hangout. But long may it prosper. Every neighbourhood ought to function so well. And if nothing else Wreck Beach is keeping our police force in tip-top shape.