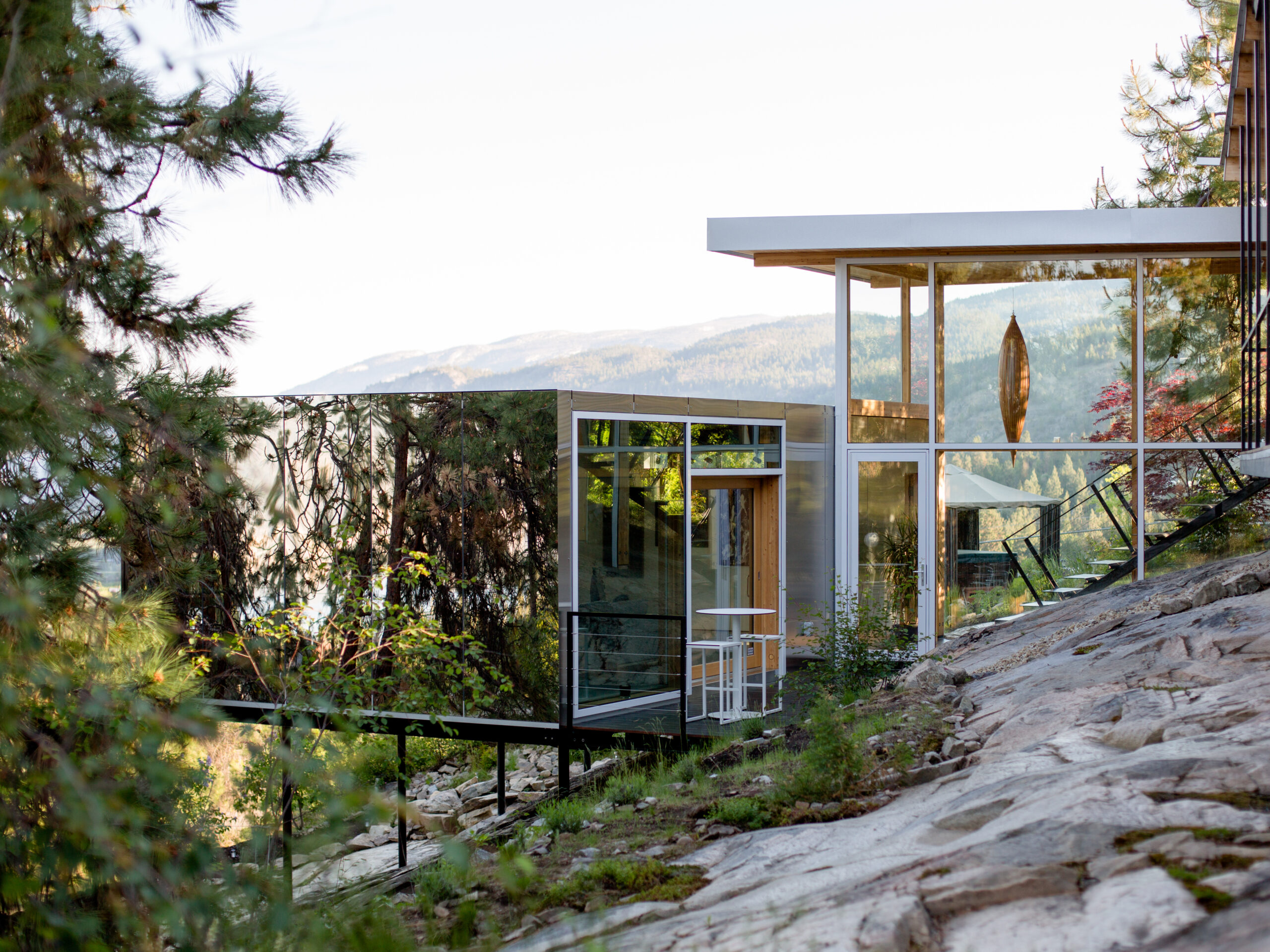 About 20 years ago, when Florian Maurer designed a site-specific house for himself and his wife, Erica, in verdant Naramata in the Okanagan Valley, he considered it perfectly complete. To use the term of his native language, it was a gesamkunstwerk, a total work of art. He created a series of interconnected pods of glass and corrugated metal, centred around an outdoor courtyard and built to the famously high standards of his native Germany. He positioned the circulation corridors outside, so despite a footprint of less than 2,000 square feet, the house felt spacious. “We lived very happily and comfortably in the house—or better, ‘village,’” he recalls. “It made sense to us because it afforded protection, privacy, and controlled views: not being held hostage by what the neighbours choose to put in front of you.”

Changing life circumstances compelled the Maurers to sell their beloved home a few years ago. The new owners, a couple who recognized and appreciated its inherent design values, wanted a small addition: a multipurpose space and private art gallery to display their collection. And they wanted the original architect to take it on. Maurer prides himself on positioning his structures so they seem to grow out of the landscape in a way that nothing can be added or subtracted. So his initial response was a terse “What do you need more space for?”

Once he recognized that their request was for art, not greed or resale value, he and his design team at f2a architecture agreed to design the adjunct space. During this time, he began a multistage move to Europe and retired from his partnership at f2a. Austin Hawkins, the f2a principal who later assumed the role of project architect, assisted with building-code issues and design review. 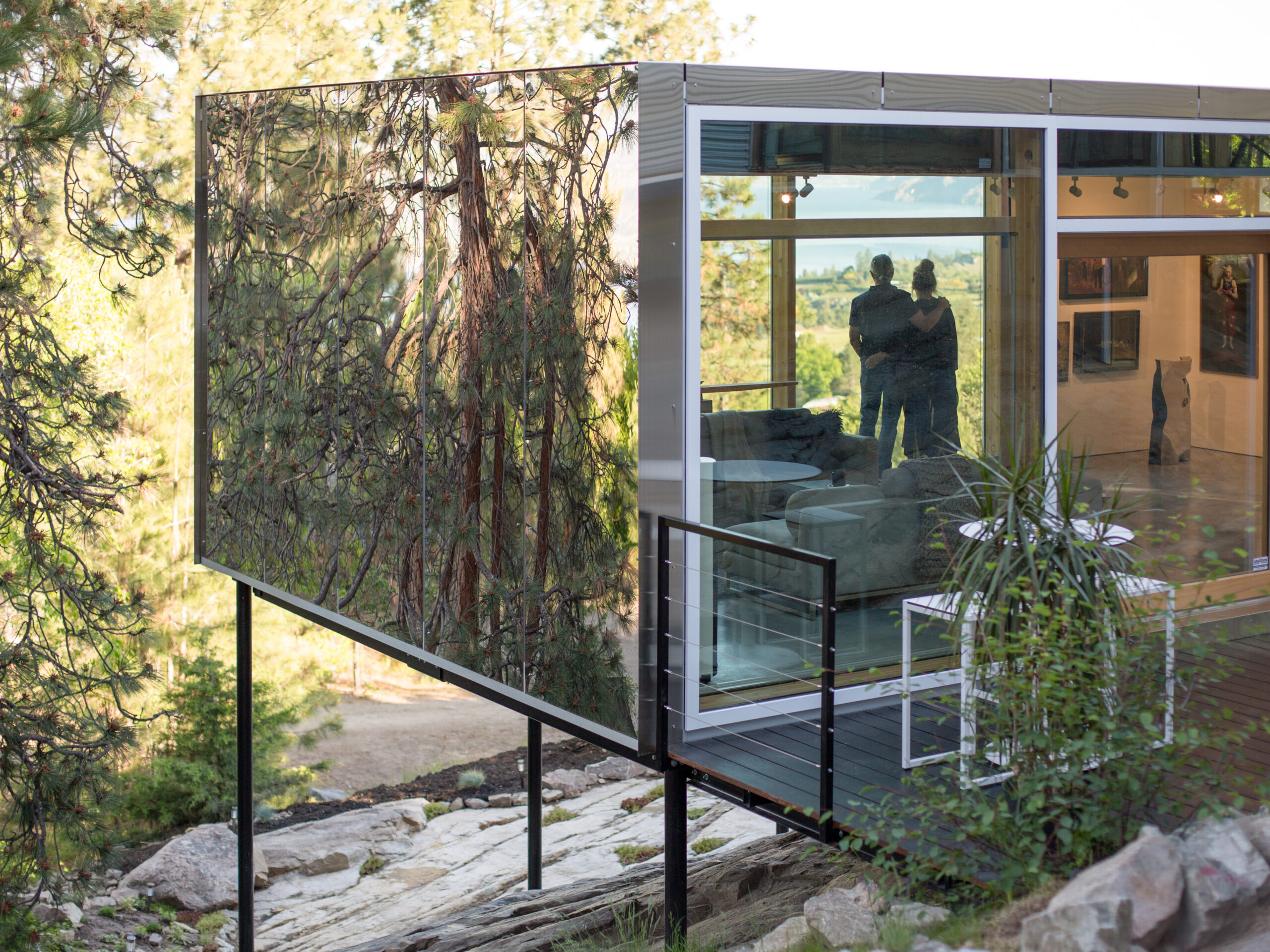 The façade and roof panels of the new room has a burnished patina—oil canning—which reduces the hazard to flying birds.

Hawkins oversaw the construction of the carefully detailed structure on the lower slope of the property. It was the only viable spot, according to Maurer, since it would be unthinkable to disturb the beautiful mature pines that cover the southern slope of the site, and the steep drop-off of the terrain allowed the addition to be low enough to maintain lake and mountain views from the living room.

The result is an almost-standalone 600-square-foot art gallery-cum-media room perched on a steel base, with glulam beams and structural insulated panels forming the superstructure. “The bedrock allowed a light, almost floating structure on slender steel posts, with minimum site impact,” Maurer says. The new volume boasts floor-to-ceiling glass interspersed with structural insulated panels along its two long walls and is sheathed with reflective metal on the south façade, as well as on its roof. For landscaping, the owners removed five feet of soil to expose the underlying bedrock and planted low-maintenance succulents in the surrounding land.

The metal cladding has an environmental as well as an aesthetic purpose, reflecting heat away from the structure during the region’s blazing hot summers. Still, the architects acknowledge that it entails a different kind of environmental cost. When it originally appeared in the online design press, bird lovers expressed concern about its highly reflective surface. Hawkins points out the trade-off: their small-scale, low-impact approach saves much more bird habitat than the usual paradigm of clear-cut lots around huge houses.

And since the house’s construction, the façade and roof panels have acquired a burnished patina—“oil canning” as Maurer calls it—which has reduced the hazard to flying birds.

Inside, the space is spectacular: a surreal oasis of contemporary art alternating with jaw-dropping views of striated bedrock, pine and cedar, water and mountain. Small stacks of art monographs, from Gerhard Richter to Fred Herzog, attest to their well-honed taste. One of their paintings, Quebec artist Mark Lang’s Tendons of the Heart, sits on a rolling track: the owners can instantly convert the gallery into a media room by sliding the painting to one side to expose a wide-screen television installed behind it. The room’s automated blinds lower with the push of a button, completing the transition. 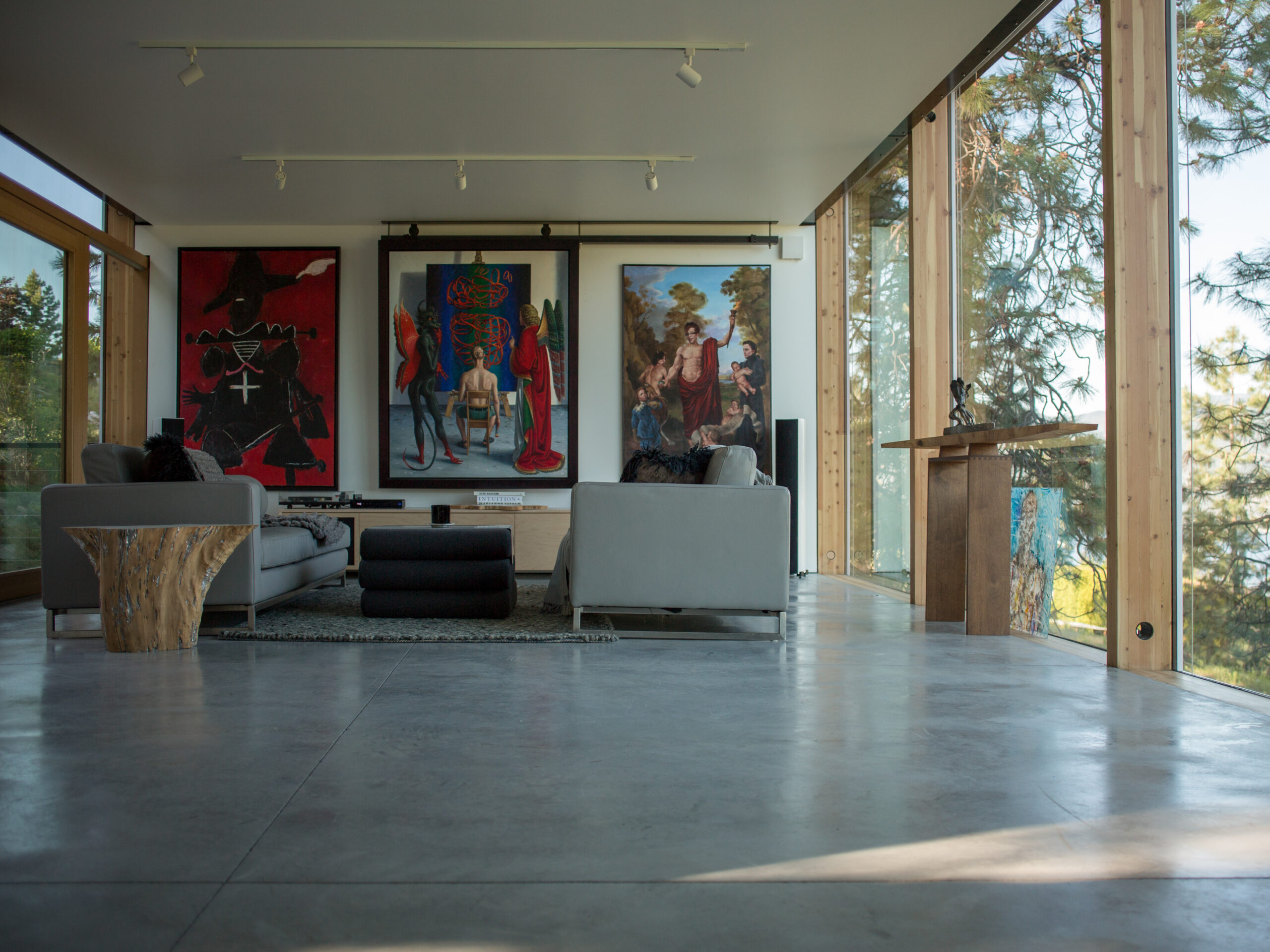 The paintings can be slid aside to reveal a widescreen television to convert the gallery into a media room.

The owners—and Maurer—would have been content to build the gallery addition as a separate standalone structure, but a local bylaw required it to be attached to the main house. They had to build an enclosed hallway attaching it, which frustrated Maurer as it expanded the home’s footprint by 14 square metres. The design team left the corridor unheated to minimize its environmental impact.

“For us, it’s been a research-and-development opportunity,” Hawkins says. “We think a rich life can be lived in a small dwelling close to the land. Life can be more luxurious, full of art and culture, than life in a cavernous mansion.”