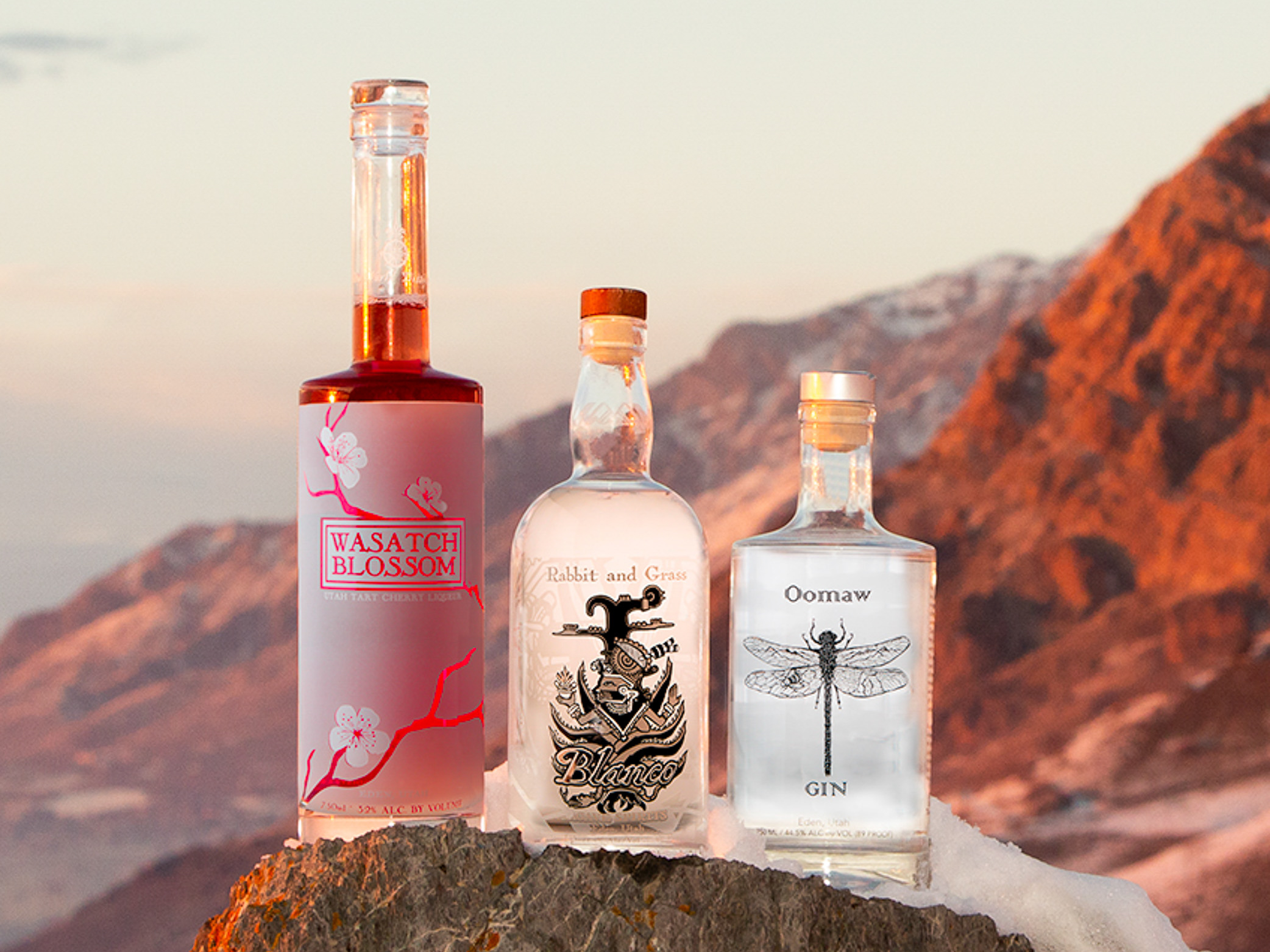 As I take a sip of New World Distillery’s Wasatch Blossom cherry liqueur, I brace for the syrupy sweetness I associate with cherries.  Instead, a sharp tartness from the Montmorency cherries strikes my tongue, balanced the next moment by a slight sweetness from agave nectar. I immediately want a second sip.

Instead I swirl the liquid luxuriantly in my glass, mimicking the connoisseurship of the distillery’s owners, Chris and Ashley Cross. Outside to the west of Eden, Utah, the peaks of the Wasatch range cocoon the distillery from the bustle of Salt Lake City and the desert sprawl of the Great Basin. Inside, personalities clash. One half of the room evokes a Star Trek set—three silver tanks impose on the psyche, adorned with bulging knobs that control temperature, taste, and time.

The tanks are Chris’ pride and joy. “We got them shipped in from the Netherlands,” the master distiller says, fondly patting the containers of the spirits New World sells—vodka, gin, and even a bourbon (perennially sold out.) He and his wife, Ashley, have reason to be proud; almost six years after they turned their decades-long hobby into a fully functioning distillery, it is enjoying success as a tourist destination. 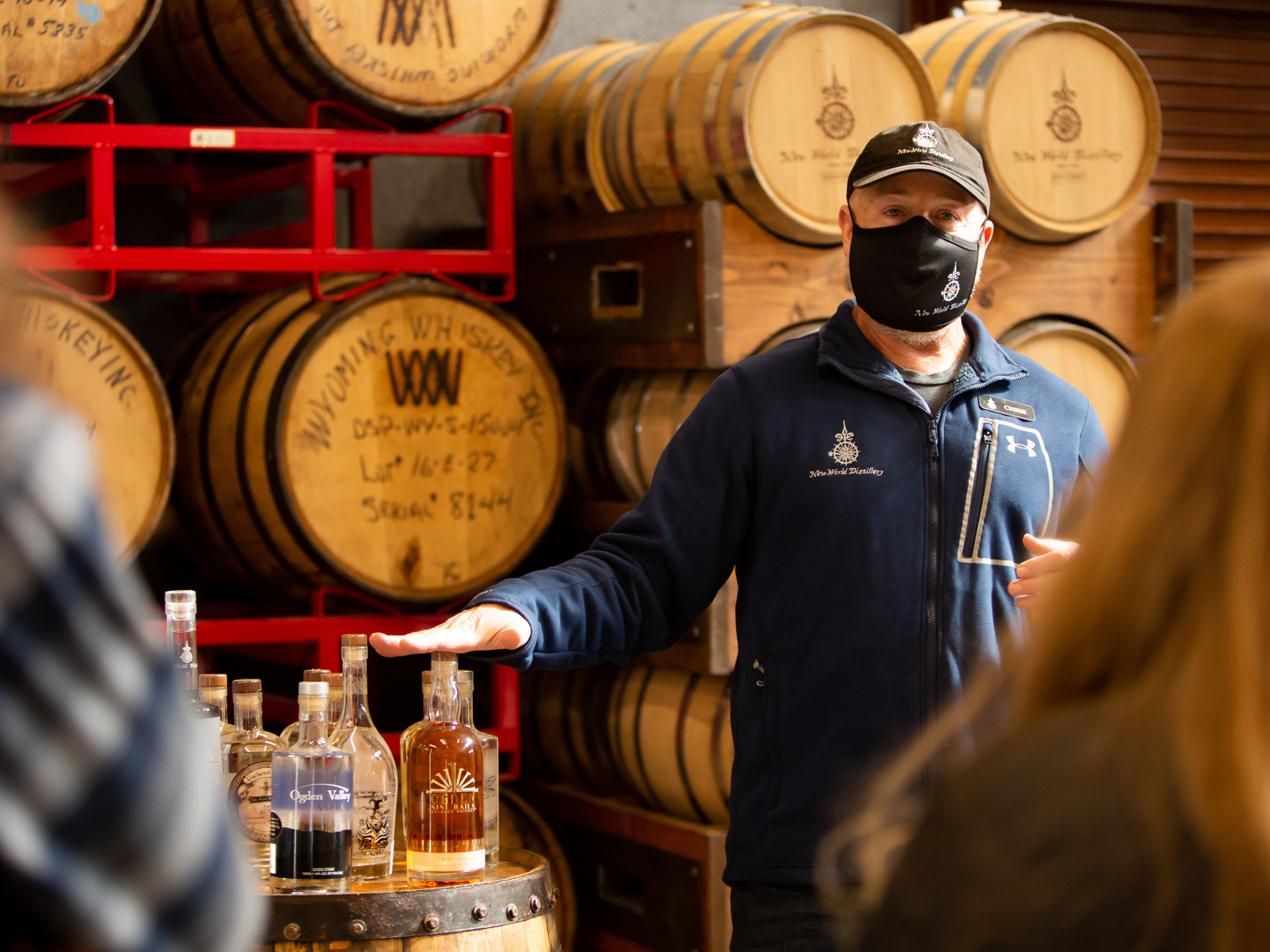 Christopher Cross, 55, explains his process during a distillery tour.

Moving past the silver tanks, I’m led around to the other half of the room—a curio shop. Glass in every shape and size is piled high, stacked in boxes and stamped with shipping hieroglyphs. Bottles—tall, squat, curved—filled with ruby, golden, and silver liquids stand at attention on the bar, their caps replaced by slender metallic pouring spouts. Along their midriffs is an eye-catching kaleidoscope of label designs: a dragonfly, dark mountains, a humanoid with multiple arms, each with a story to tell.

One in particular holds my interest: the Wasatch Blossom cherry liqueur.

The thin-necked, cylindrical bottle glows red through what first look like cracks on the glass. On closer inspection, the branches of a cherry tree are cleverly etched as negative space on the bottle. Only a sliver of red liquid peeks up above white blossoms that decorate the tips of the branches, asking to be unbottled and poured. 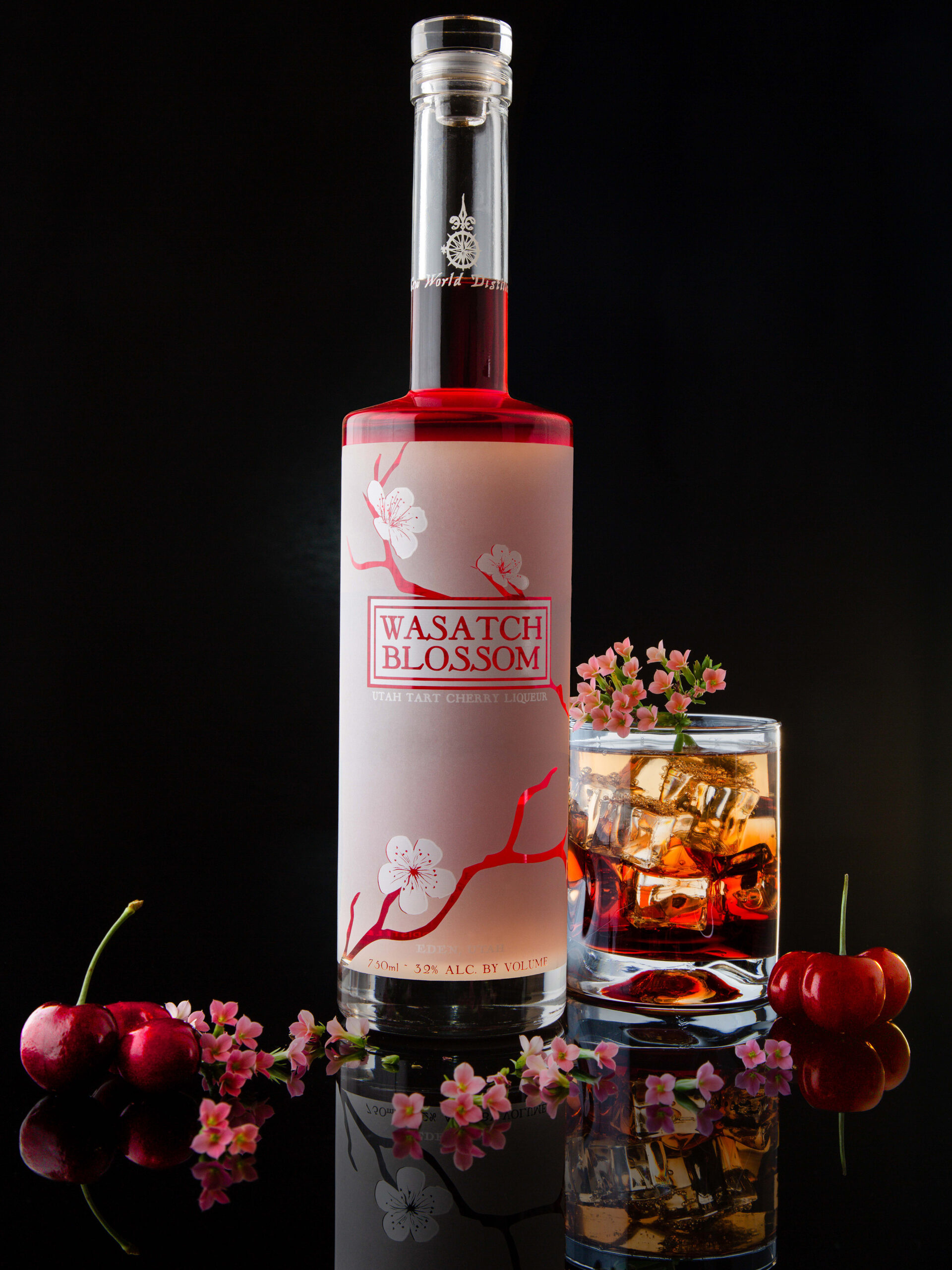 The bottle is a piece of art. But its artist, Amelia Haselman, is sitting hundreds of miles away in Vernon, B.C., and has never met the Crosses in person. Their collaboration reflects a connected world in which craftspeople who share little in common except the same artistic language create something greater than the sum of its parts. And they met by accident.

In 2016, eight months before the Crosses were set to open the doors to their distillery, their label artist in Salt Lake City had an unexpected emergency. Faced with an unrelenting deadline, they looked for a new artist, finding one in the creative director of the in-house label team of their packaging company, Universal Packaging. Haselman had worked there since 2007, and by then, there wasn’t much to the job she didn’t know.

Transferring art to a bottle design is a whole process, Chris says. “There’s rules—labels have to be approved by the federal government—so it was very helpful to have an artist that was familiar with all the requirements.”

But it wasn’t just industry knowledge the Crosses found in Haselman. They also found someone who understood their vision.

A quirk of making spirits in Utah—which has some of the most restrictive alcohol laws in the United States—is that there’s far less competition on the shelves at state-controlled retail shops. And with the hyper specific, local labels Haselman designs, New World stands out—and appeals to their main audience, the minority of the population that enjoys a good drink in Mormon country.

Take New World’s vodka, named after the Ogden Valley where the distillery is located and towering Mount Ogden to the south. 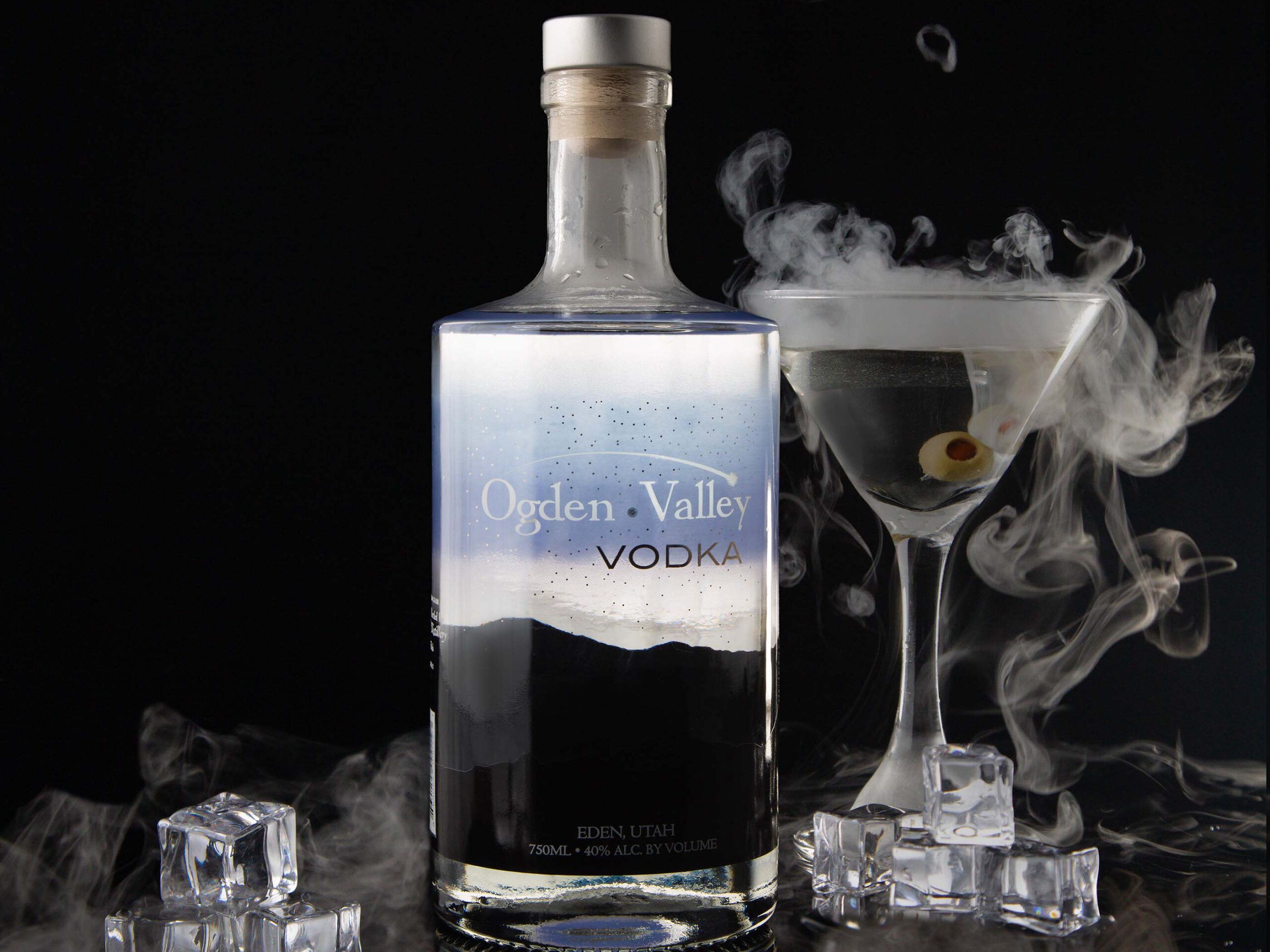 The Ogden Valley vodka bottle displays a mountain range with a special place in locals’ hearts.

“We drove all around Ogden Valley and took pictures of all the major mountain peaks,” Chris says, “so she could incorporate that 360-degree design on the bottle.”

There are indeed wraparound dark mountains on the bottom of the bottle, silhouettes drawn by Haselman from pictures sent to her. But there’s a twist—the silhouette is transparent, revealing the vodka in the bottle. “It magnifies those mountains and really brings them forward,” Haselman says, chuckling at my squawk of surprise.

“She entertained our whims,” Chris says happily. “People walk in and recognize that they’re actually the local mountains that surround the bottle. It’s a really great design.”

Haselman had a hand in designing most of the labels on New World’s products. Her favourite idea—though she insists they are all “her babies”—ended up on the Nine Rails bourbon. The name comes from Ogden’s Nine Rails Creative District, and their own homage to the Nine Muses of Greek mythology. Haselman incorporated a pattern reminiscent of decoration on ancient Greek pottery, but on closer inspection, negative space forms railroad spikes, paying tribute to Ogden’s history as a major railroad centre. 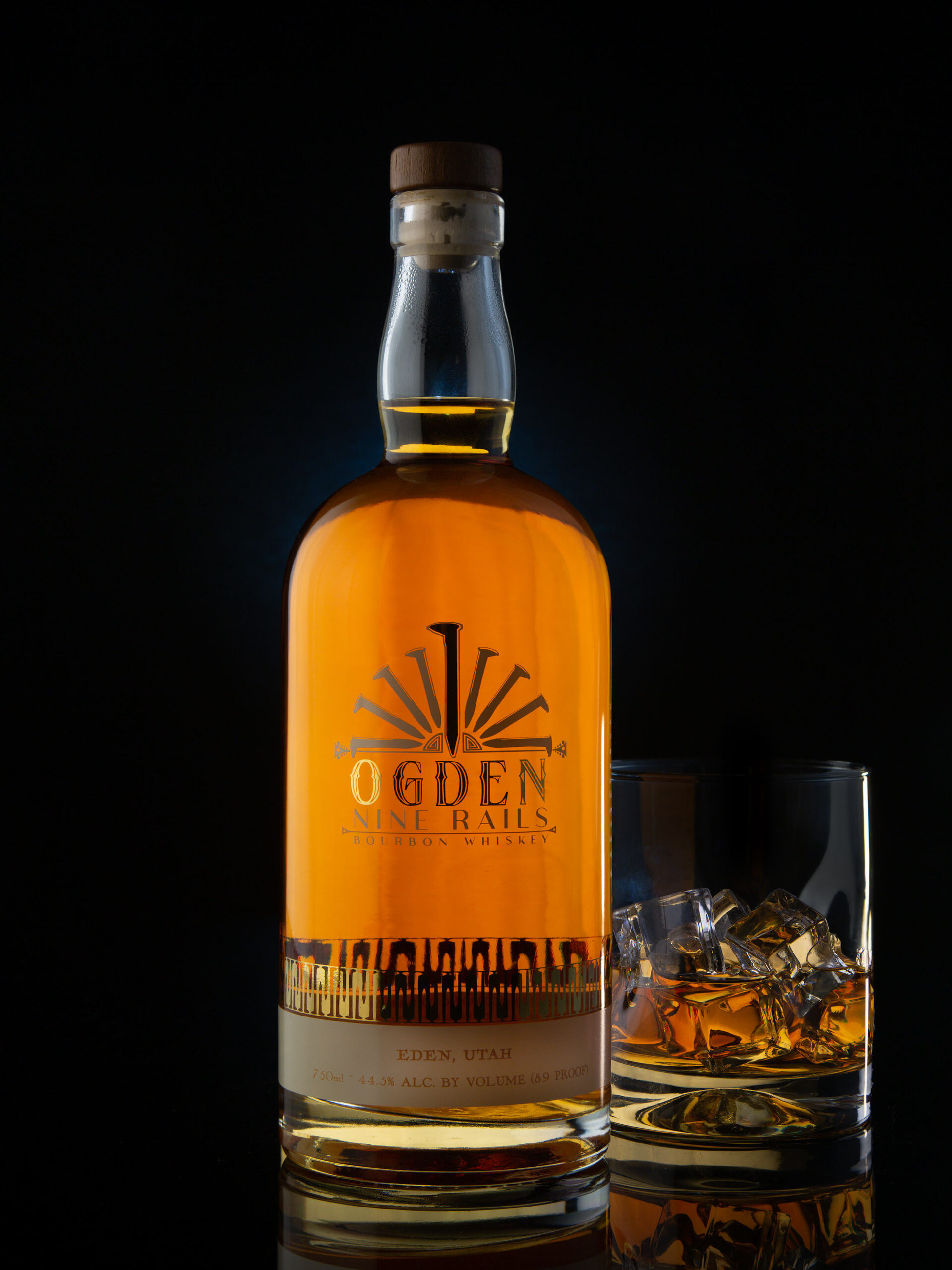 The perennially sold out bourbon is only available at New World Distillery.

“That one was fun,” Haselman says. “It’s almost like a hidden symbol in there. And Chris and Amy’s reactions when they got these bottles and filled them just warms my heart.”

The negative space and twists in labelling that Haselman cultivated for New World culminated in the Wasatch Blossom bottle, which she designed from the ground up.

Chris didn’t want “just another bottle with a bunch of cherry blossoms,” Haselman laughs, or even have cherries on it. 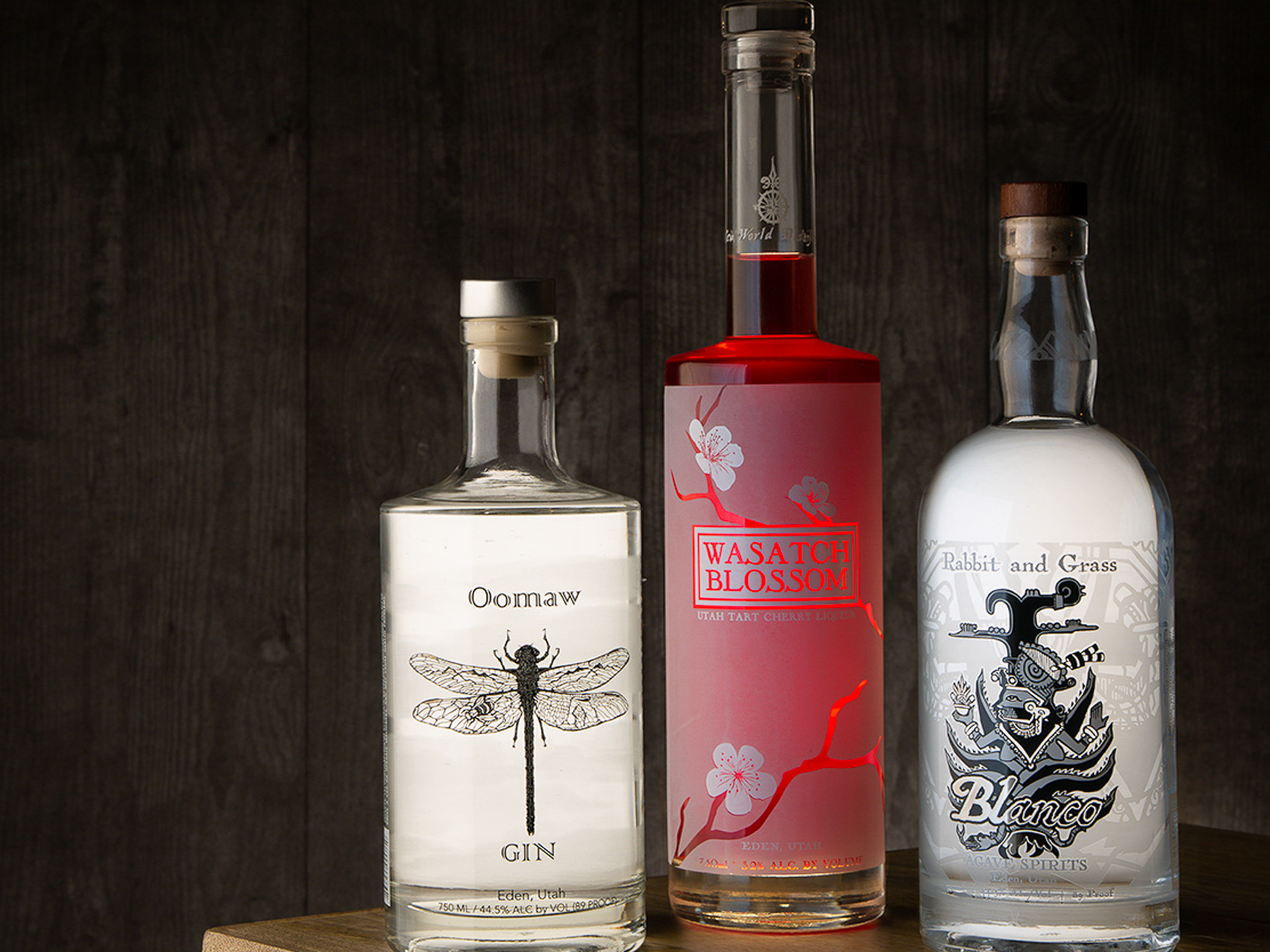 “I wanted to limit the colour palette to just the white on the edge. I didn’t want it to compete with the design.”

“It’s one of our favourite designs,” Chris says, and he makes a point to mention his designer during tours. For Chris, Amy Haselman’s contributions stand alongside his own work of distilling wizardry.

Haselman values the trust Chris has put in her talents and expertise. “The stories are so esoteric, and he gives me so much freedom,” she says.

Despite her long association with New World, Haselman has never visited the distillery in Utah. But she’s determined to go down to meet her partners soon. “They’ve invited me,” she says with a touch of familial fondness. “I will get down there.”

She’s only ever tasted one of the spirits from the lineup: the Wasatch Blossom cherry liqueur.

“I thought it was going to be sweeter,” she confesses.

Read more about design and spirits.