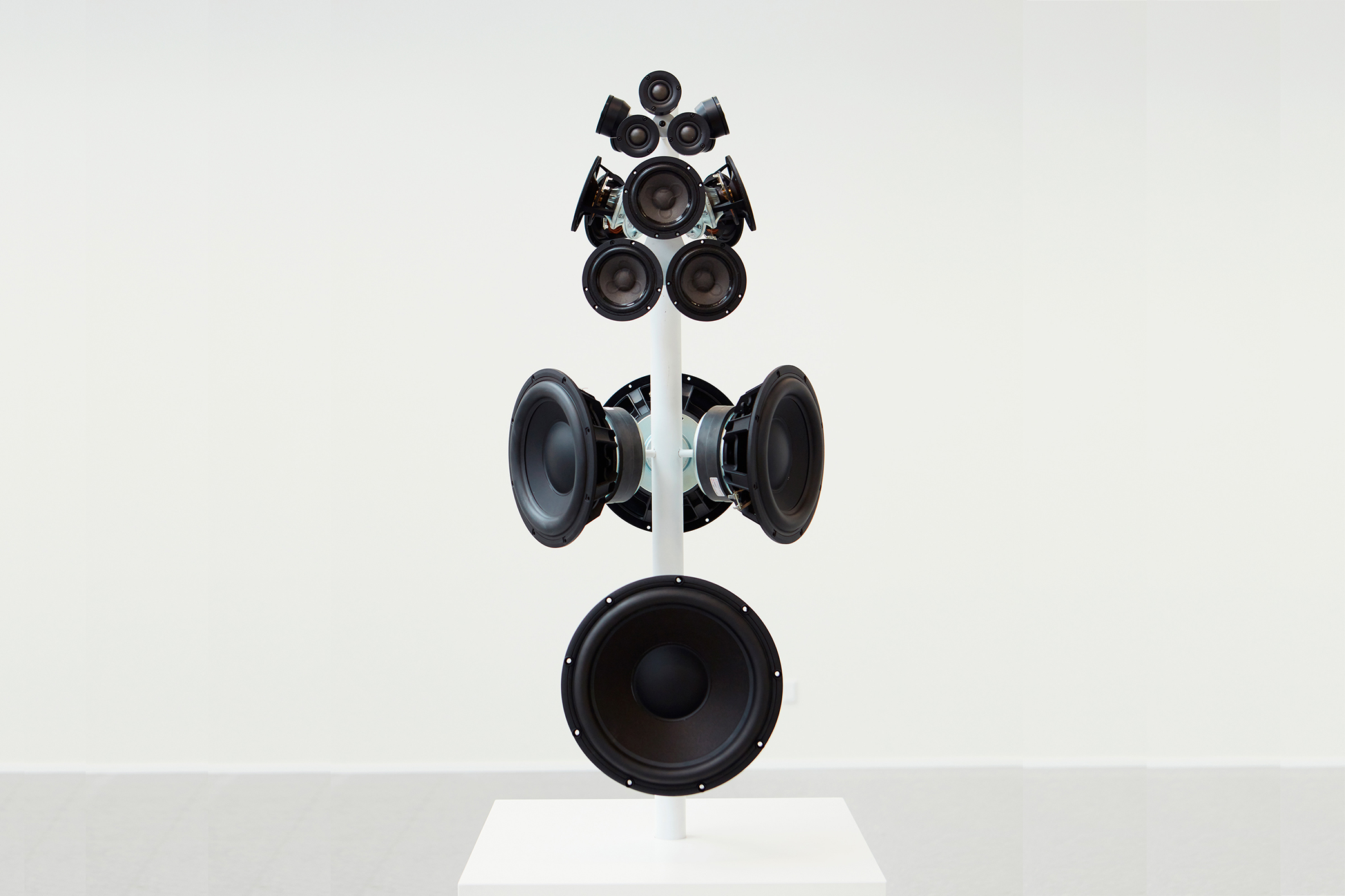 Four thousand miles from home, a smartly dressed and chatty Canadian places his chair carefully on an X in the centre of a room and prepares to listen. That’s Geoff Martin’s job: to listen, to understand, and to explain the science of sound.

“A lot of what I do is sit on the X and listen to music and then talk to the engineers to describe the problems I hear,” says Martin, a “Tonmeister” for Bang & Olufsen. “My hearing itself isn’t special but I am able to describe what I hear. It’s like a chef, who doesn’t just say something is sweet but can ascertain between different levels of sweetness.” A Tonmeister is somebody trained in both music and engineering; they can read a score as well as comprehend electronics. It’s a combination that helps Bang & Olufsen create some of the best-sounding—and the best-looking—audio equipment available.

Born in Newfoundland, Martin now lives near Struer, Denmark, a sleepy town in the middle of nowhere that you can reach via prop plane from Copenhagen. Struer has a nice harbour, a local museum, and a population of around 10,000, but it’s also home to Bang & Olufsen. From here, B&O has taken over the world, with more than 500 mono-brand stores located in cities from London to Monaco, Shanghai to Tokyo. Their first Vancouver flagship opened on the corner of Howe and West Hastings last summer. Bang & Olufsen think the city is a natural fit. “We feel Vancouver has a kinship with those Danish sensibilities of caring about design, material, and craftsmanship,” says Ulrich Wohn, B&O’s managing director for North America. “There is also a deep appreciation of brands and quality and the finer things.” 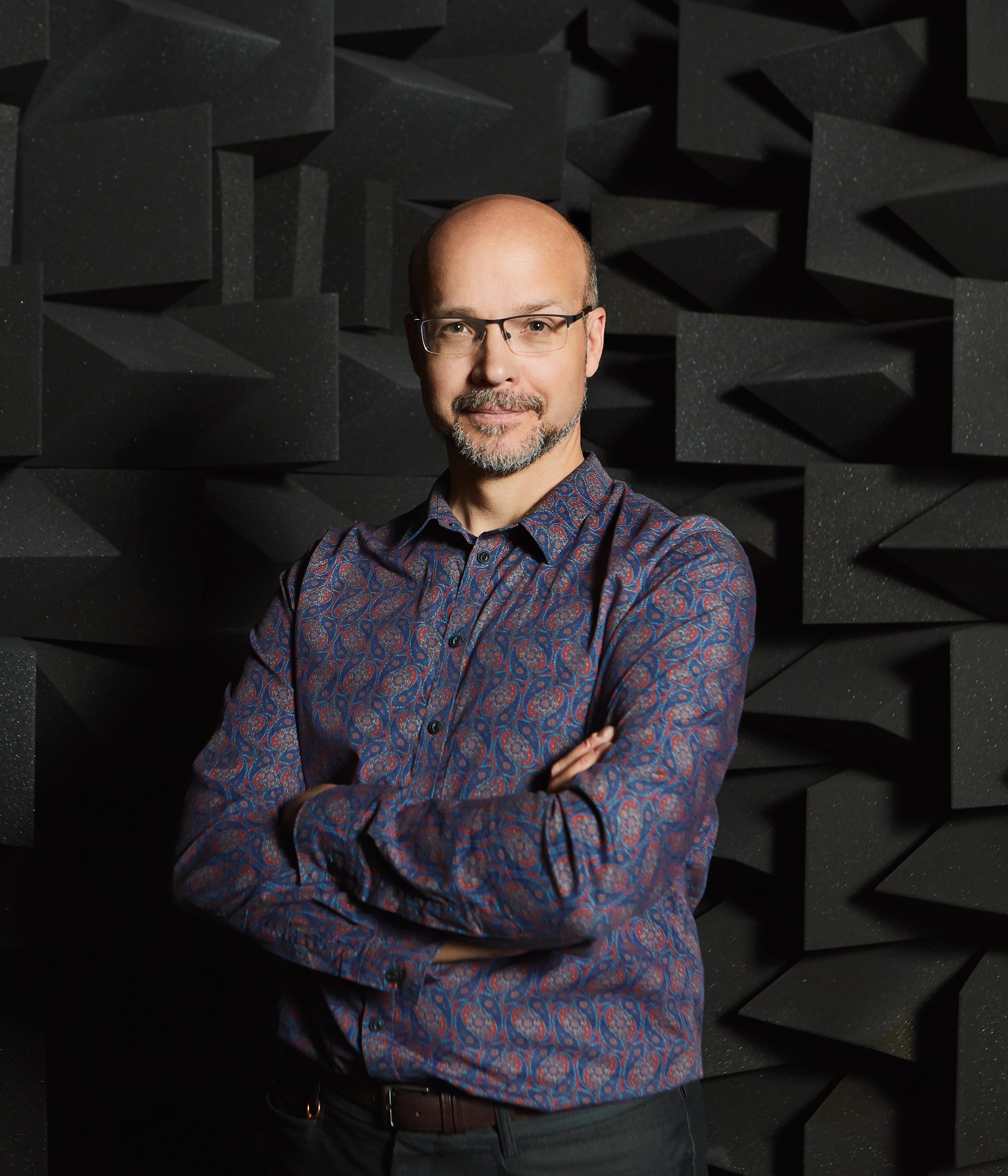 Although he has lived in Denmark since 2002, Martin says he still misses Canada “terribly.” Growing up in Newfoundland, his family would sing folk tunes in gatherings that saw music as central to their sense of community, entertainment, kinship, and tradition. He began playing piano at six and earned a Bachelor of Music from Memorial University of Newfoundland—a qualification also obtained by his two sisters, who both teach music at university level and are married to musicians.

But Martin also loved math, and at McGill University in Montreal he merged the two interests by taking a PhD in acoustic simulation, designing software that could demonstrate what a concert hall would sound like before it was built. That understanding of music and electronics is the foundation of his work with Bang & Olufsen. His job, essentially, is to make sure the sound that comes out of the speakers is the same as what was heard in the studio as it was being recorded.

Bang & Olufsen were founded in Struer in 1925 by Svend Olufsen and Peter Bang. At the Olufsen family home, the pair began making radios, before adding televisions and other pieces of audio-visual equipment. They were always innovative—their first invention allowed radios to be run from the mains rather than batteries—and by the 1990s, B&O was a synonym for craftsmanship, sound quality, and groundbreaking design. The company never left Struer, which now calls itself the “City of Sound.” The local museum is filled with B&O products. There are rare items, such as the only surviving example of a Bauhaus-influenced radio gramophone from the 1930s. And there are classics, including the slender, tall Penta speakers—mini-skyscrapers that changed the rules by showing that speakers could be sleek and elegant rather than squat and boxy.

The current HQ is an old B&O assembly factory on the outskirts of Struer. The staff canteen has a grand piano—unusually, perhaps, a present from the employees, who all chipped in to mark the company’s 75th anniversary—and a wall of headshots comprising the 1,407 workers who have served more than 25 years, headed by Bang himself (Olufsen died six months short of marking that milestone). Next door is Factory 5, an aluminum plant where the company’s signature material is manipulated into new and exciting shapes. Product designers come here to experiment with new finishes and designs, and engineers use 3D scanning technology to inspect finished pieces and ensure they are of sufficiently high standard. The demands are exceptional: to take one example, every remote control is milled from a single piece of aluminum and polished by a robot for precisely eight minutes before it is deemed acceptable.

B&O’s focus on design began in the late 1950s. The aesthetics of Danish furniture were becoming increasingly refined, but radios still occupied bulky wooden cabinets. B&O looked outside the company for help, bringing in designers—most significantly Jacob Jensen and the very influential David Lewis—who experimented with shapes and materials, and began removing unnecessary buttons or dials. The results were transformative, turning radios, televisions and hi-fis into aesthetically desirable objects for the first time. The process is still largely design led, which explains the extraordinary shapes of B&O products like the conical Beosound 2 or the hexagonal, wall-mounted Beosound Shape.

“It’s an evolving discussion between design and acoustics,” says Martin, as he looks at prototypes of recent speakers. “Most products are primarily design driven and we have to make them sound as good as possible, but for the big speakers the acoustic team are able to set the parameters and the designers make it pretty.” 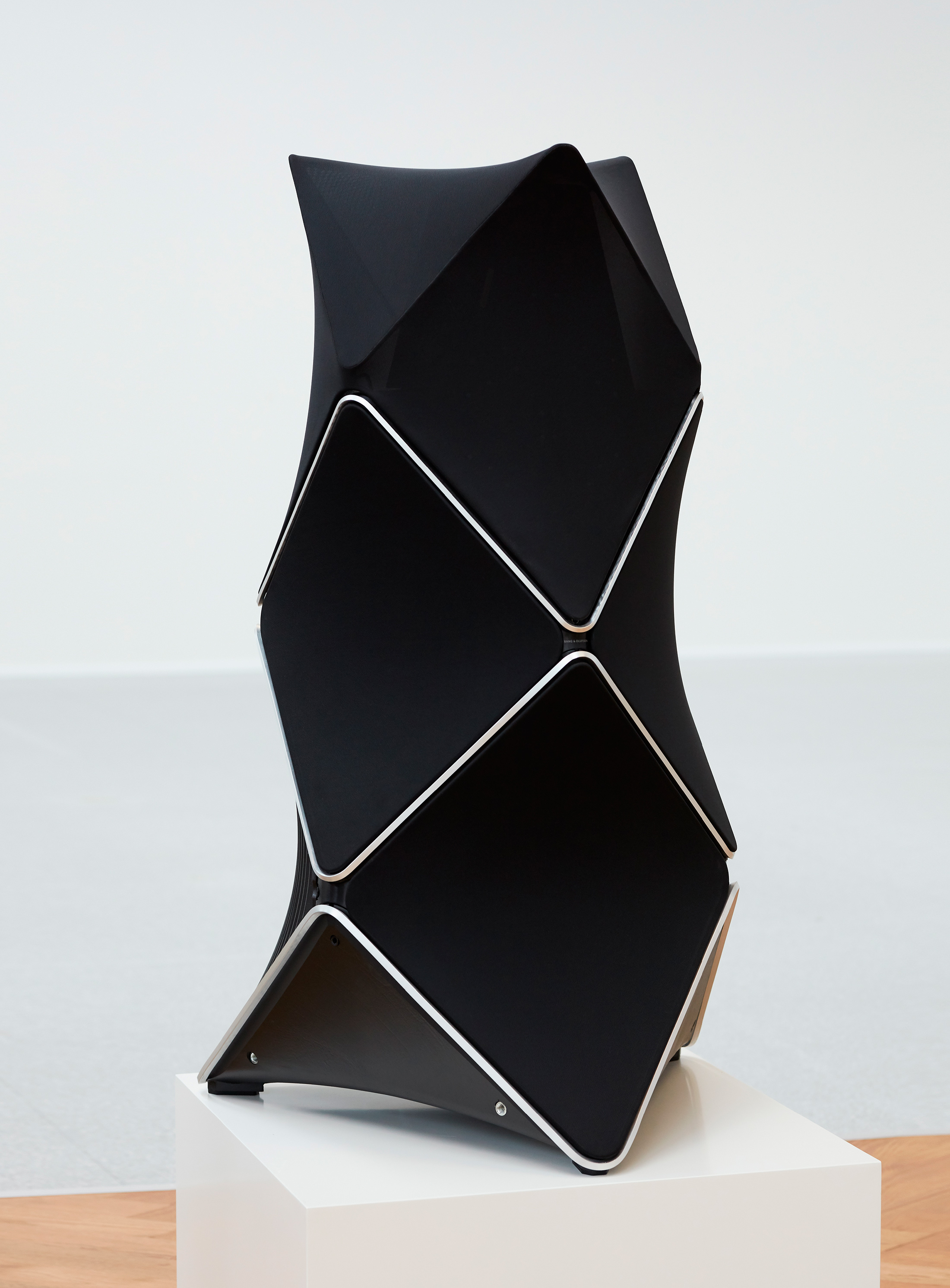 The most recent landmark speaker is the Beolab 90, which Martin spent years perfecting—his wife calls it their “third child.” Martin gives a demonstration in the listening room, a sonically sterile environment designed to eliminate interference from outside or distortion from surfaces. The only sound in the completely soundproof room is what comes out of the speakers. Inside, music can be played very loudly, while outside, no one hears a sound. B&O has to anticipate how customers might use their equipment. Sometimes that means spending two weeks playing German techno and Punjabi rap at full volume to ensure they won’t overheat.

The Beolab 90 is the world’s most innovative loudspeaker for audiophiles. It can be set to have a narrow “sweet spot” and an external mic that first detects the acoustics of the room, and then makes adjustments. “The idea is that the speaker doesn’t control the room but adapts to it,” says Martin. “We want the listener to hear what was made in the studio and the biggest problem is sound reflection off the wall. We can’t change your room so we use the speaker to make the entire frequency range as narrow as possible.” This narrow beam can be moved depending on where the listener is located.

Most customers don’t line their walls with acoustic tiles or place their sofa on an X in the precise centre of a carefully delineated symmetrical space, so the Struer complex has other areas to help engineers understand how their speakers might work in real life. In the Virtual Reality Lab, they recreate what different speakers can sound like in different rooms, or in cars (with windows open or closed) or through headphones on airplanes (with children crying or PA announcements). They can conjure up the sound of the world’s four best concert halls, or experiment with noise-cancelling technology that automatically adjusts for different types of aircraft. Another door leads to the BeoHome, a physical recreation of a modern apartment complete with working kitchen, bathroom, elegant Danish furniture, home cinema and the full range of integrated B&O products. There’s a (superb) coffee machine, a fridge filled with Champagne, and a home cinema with three different speaker installations for surround sound. The space doubles as a great venue for staff movie screenings. 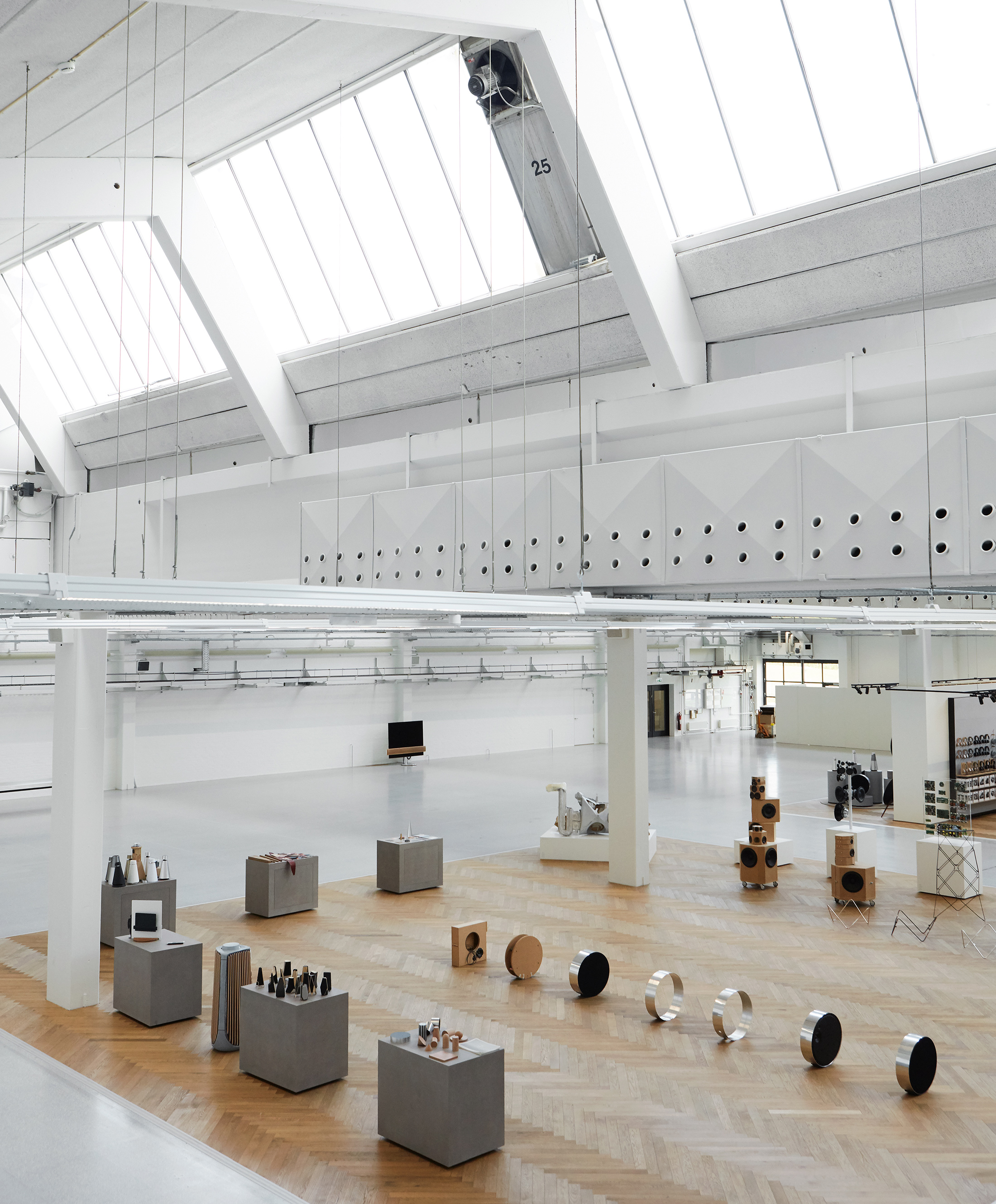 In the centre of the Struer office is an area that allows designers to experiment with store layouts. These concepts will soon find their way to Vancouver. Ultimately, the plan is to “go deeper” with a second or third store in the city at some point in the future. “West Hastings has gone through such a rejuvenation it is now a hugely important part of the Pacific Northwest, let alone Vancouver,” says Wohn. “Being in really good company in this very accessible area ensures we are relevant to the community. The other important part of opening up in a new city is making sure we express ourselves and build a place we can socialize. We can bring people in and also carve out private areas for listening and to discuss the best location for our products in customers’ homes. It’s important we get that right for people and we need the right space in the store for that to happen. Vancouver is a dense city and has so much to offer in terms of culture, and we really think of our audio systems as a celebration of those aesthetics.”

This article is from our Summer 2019 issue and was originally published on June 12, 2019. Read more in Design.