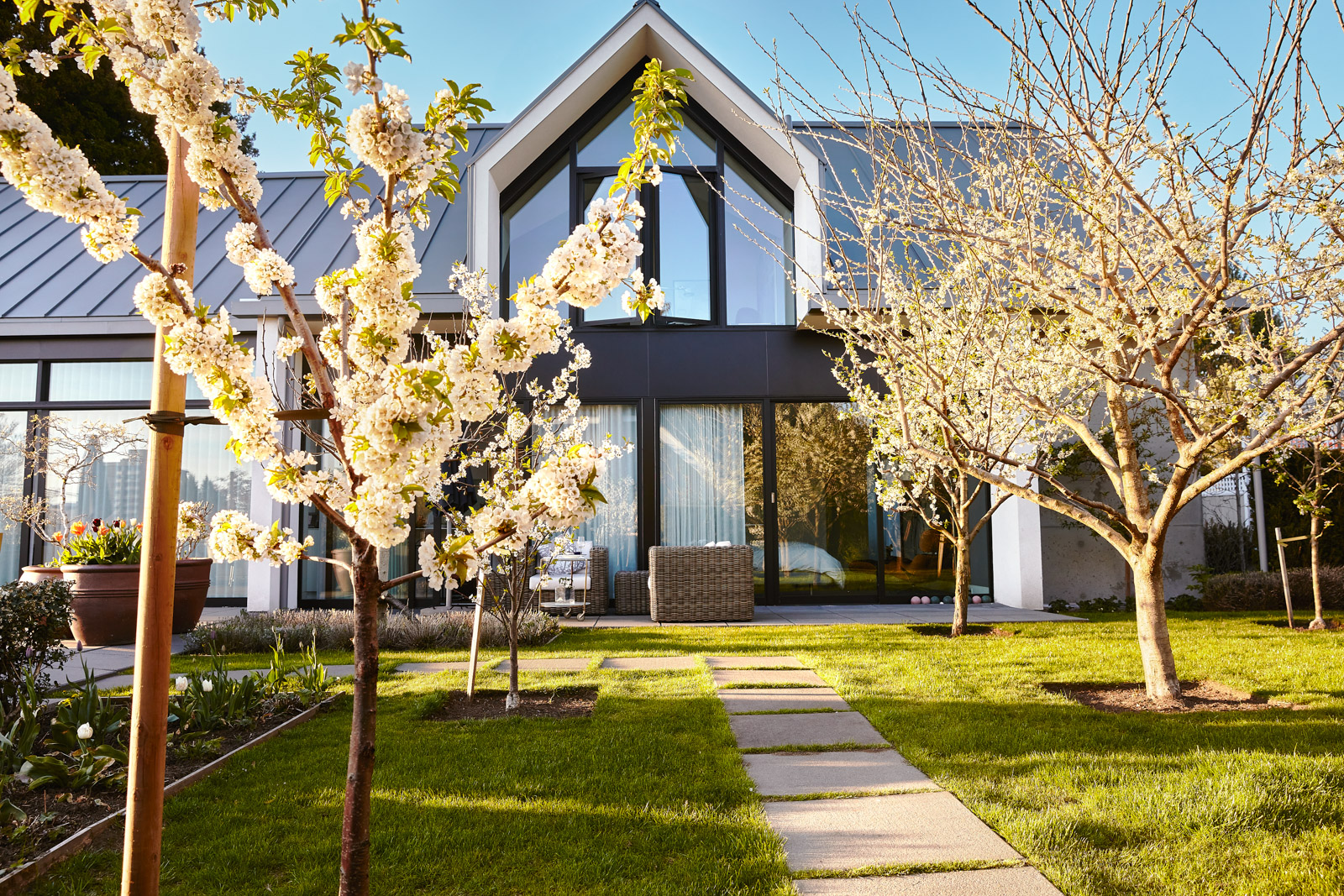 If you are at all familiar with the residential work of the late, great, local architect Robert Burgers, you know that he designed multiple, masterful, modernist houses for himself and his clients on some of West Vancouver’s most naturally gorgeous, more topographically tricky building sites.

So you might think it strange that the house featured here, which is the final place he built to share with his wife and design partner, Marieke, is situated on a viewless corner lot in a more central part of the community rather than out in the wilds straddling an outcrop overlooking the inlet, as a few of the duo’s previous dwellings did.

But there was a method in the Burgers’ locale change, and no, it wasn’t just because they were seniors and wanted to shorten their distance between shops and services.

Smitten by summers spent helping their daughter cultivate fruits and vegetables on her acreage in the Okanagan, the energetic couple was keen to replicate that experience in a more urban setting, and you can’t plant fruit trees on rock.

A flat patch of earth is the preferred choice when you want to grow things to eat, and the Burgers established the perfect plot on this site by lifting the rear of the property to allow for both a street-level garage with a terrace on top and an intimate orchard beside it. 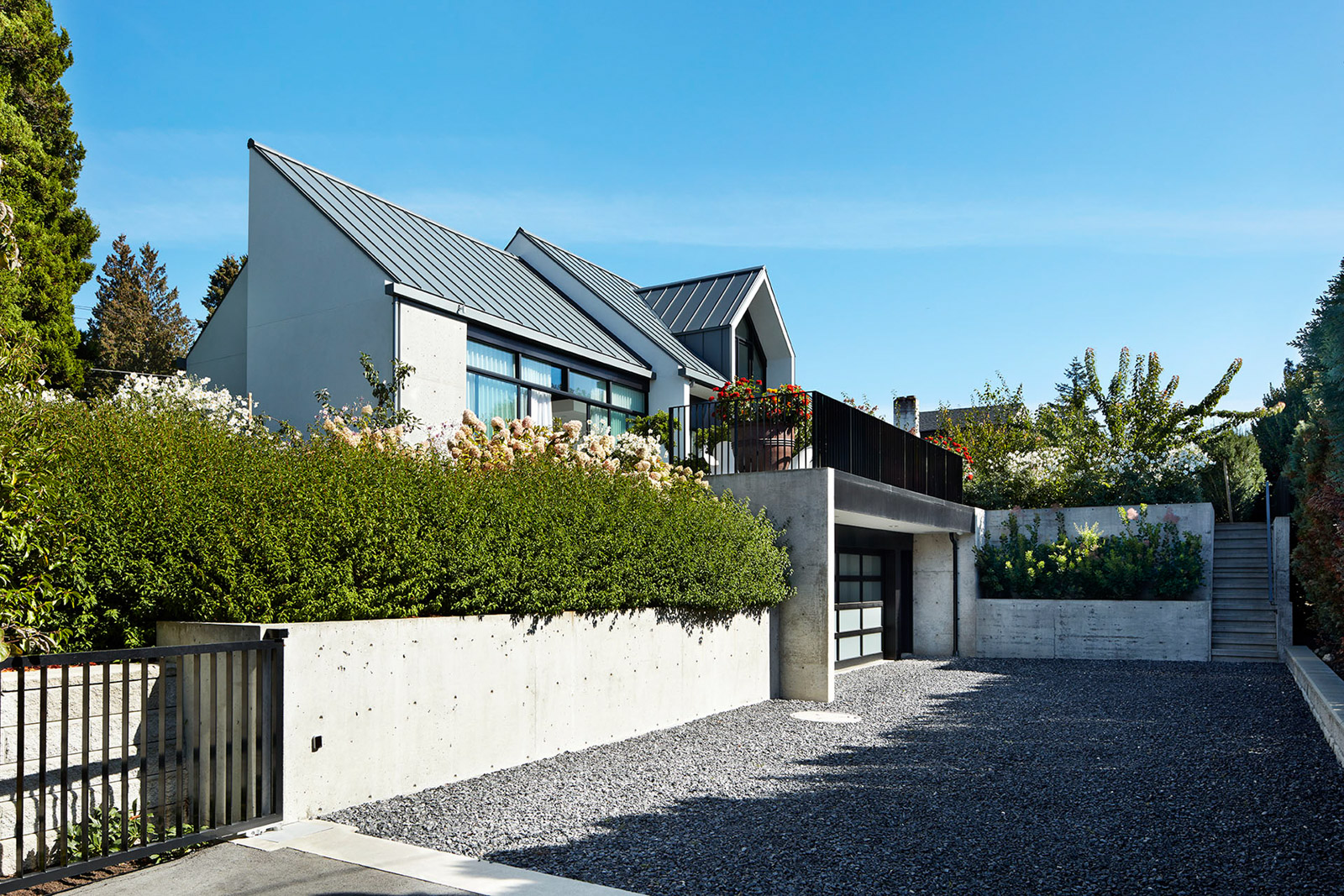 All good things to eat

The Burgers’ urban orchard is a bumper producer consisting of 22 fruit trees—including peach, pear, plum, cherry, fig, and multiple heritage apple varieties—planted in two separate parts of the garden. It is mesmerizing in its scale and rhythmic in its layout, a magical experience just off the kitchen where perfectly spaced trees pruned to just the right size put tasty tree-ripened fruits within easy reach of their grandchildren. 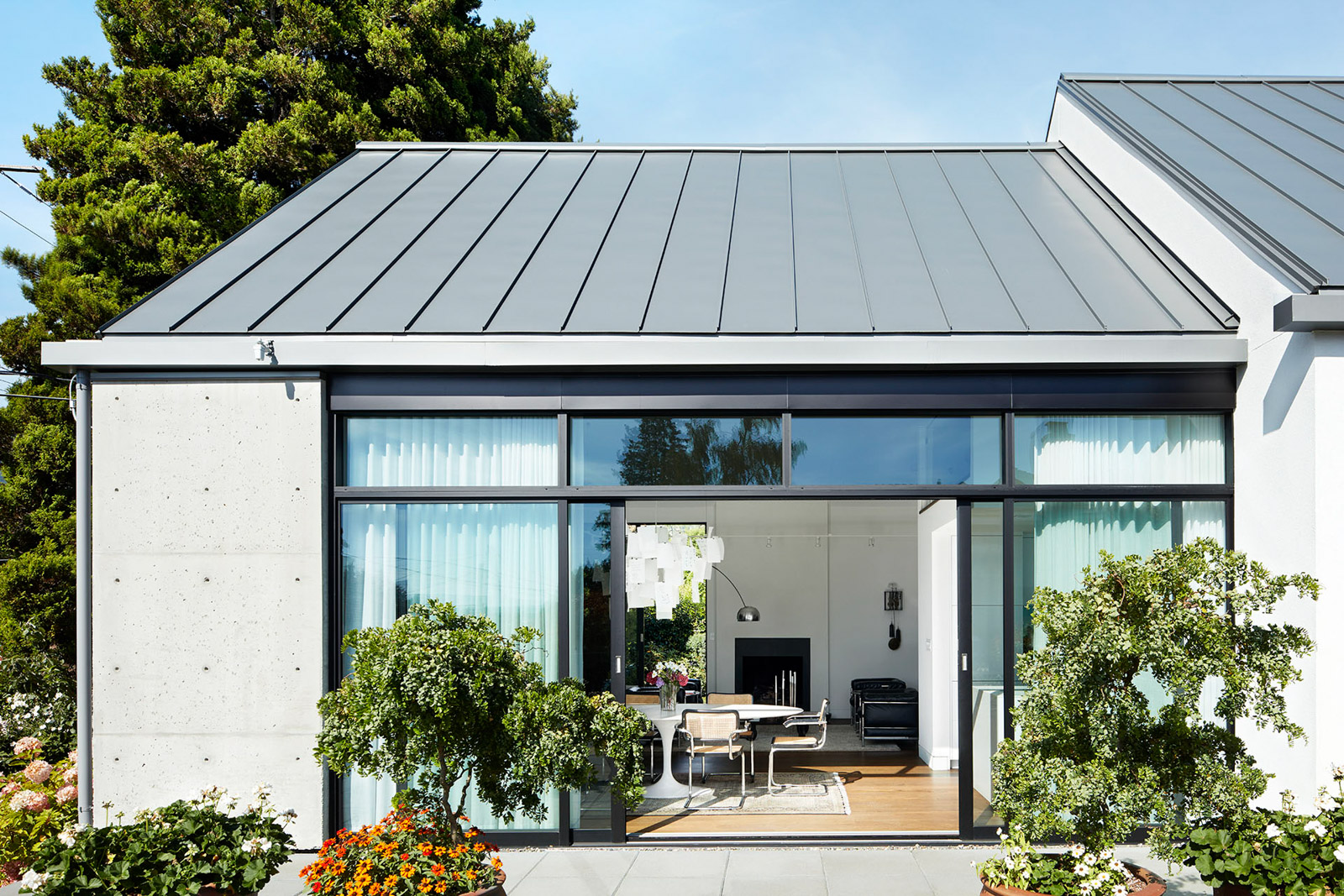 Every gorgeous city farm deserves a beautiful farmhouse, and the high-design-minded Burgers reached back into their own past growing up in Holland to find the architectural vocabulary for theirs. Their Dutch treat is a refined West-Coast-influenced version of a classic Netherlands farmhouse. From the street, the residence reads as knowingly Dutch, albeit with a modernist twist: the steeply pitched steel roof with minimal overhang and the unadorned noise-cancelling concrete facade are a few of the visual giveaways; the rear, on the other hand, is a regionally inspired exuberance of windows that look out at the garden, including sweeping glass sliders that maximize access to the outdoors, which is a signature Burgers design move.

Inside, the farmhouse story continues with the dramatically high ceiling and an airy, integrated floor plan. “A few years ago, people were talking a lot about making ‘great rooms’ as if they were a new idea,” Marieke says, noting that a classic farmhouse typically consists of one big open room where most family activities occur, and confirming that this is the way they like to live.

The ample 22-foot-high ceiling that peaks over the living and dining areas builds on the homestead narrative before dropping to a more conventional city height in the kitchen, a manoeuvre that contributes to the cozy atmosphere you notice immediately when working in this space. This lower ceiling is also the base for a quiet second-floor sitting area with a glass railing that draws your gaze down into the livelier zones of the house. 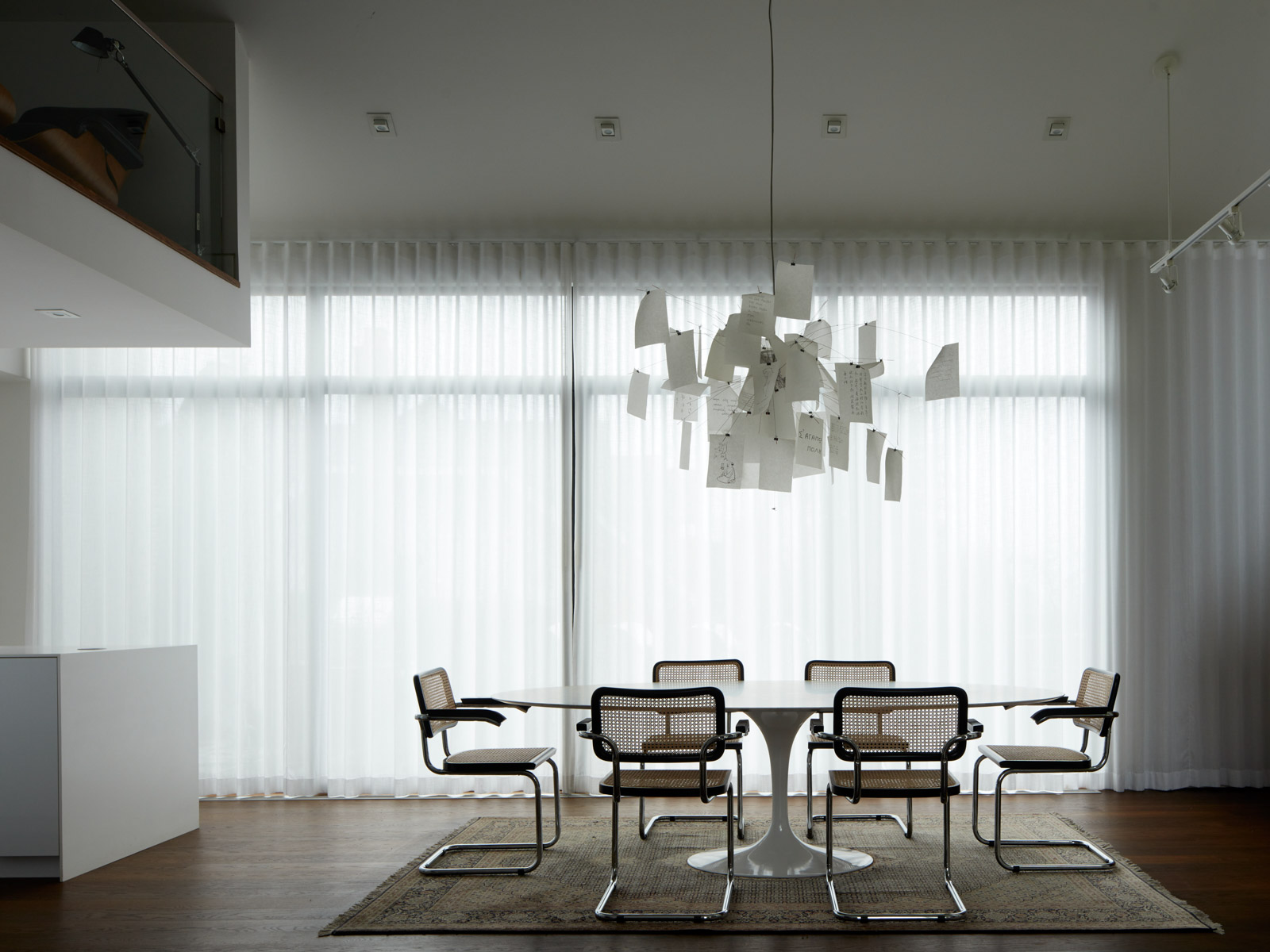 Over the last 50 years, the Burgers have designed a dozen homes for themselves in and around West Vancouver. Through all that time and with each of their moves, the couple has added to their impressive collection of modernist furnishings.

Their latest interior features furniture and lighting by 20th-century design icons including Ludwig Mies van der Rohe, Eileen Gray, Eero Saarinen, Marcel Breuer, Philippe Starck, Gae Aulenti, Achille Castiglioni, and Ingo Maurer. These pieces are mixed in with family heirlooms, such as the ancient Murano glass chandelier in the foyer, plus antique cabinets unearthed on road trips throughout Europe and large canvases painted by the couple’s daughter, Bobbie Burgers. Marieke has juxtaposed these elements in a way that is comfortable, looks sharp, and feels timeless. 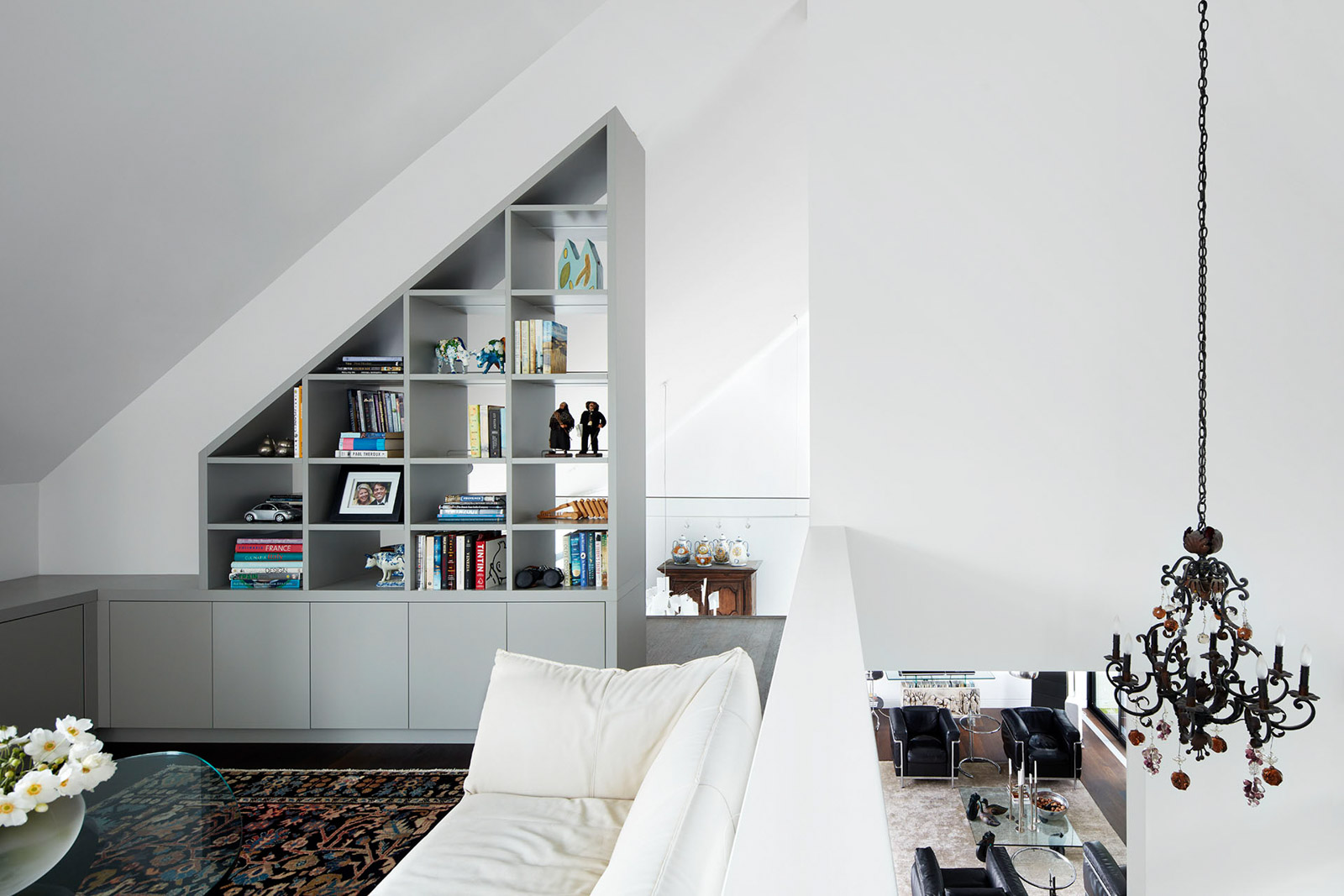 For all of its attractiveness both inside and out, the Burgers’ “roost,” as Marieke refers to the couple’s “back to the land” experiment, needed to be more than a piece of well-executed eye candy.

“We wanted this place to be as sustainable as possible,” she says, and that meant finding an environmentally friendly way to water their very thirsty orchard.

The couple’s son Cedric, an architect who partnered with his father on this project and now heads up the family’s design practice (where Marieke remains involved, too), worked to ensure the roof captures rainwater and superfilters it through underground tanks before sending it up to the sprinklers that keep the Burgers’ beautiful garden quenched. 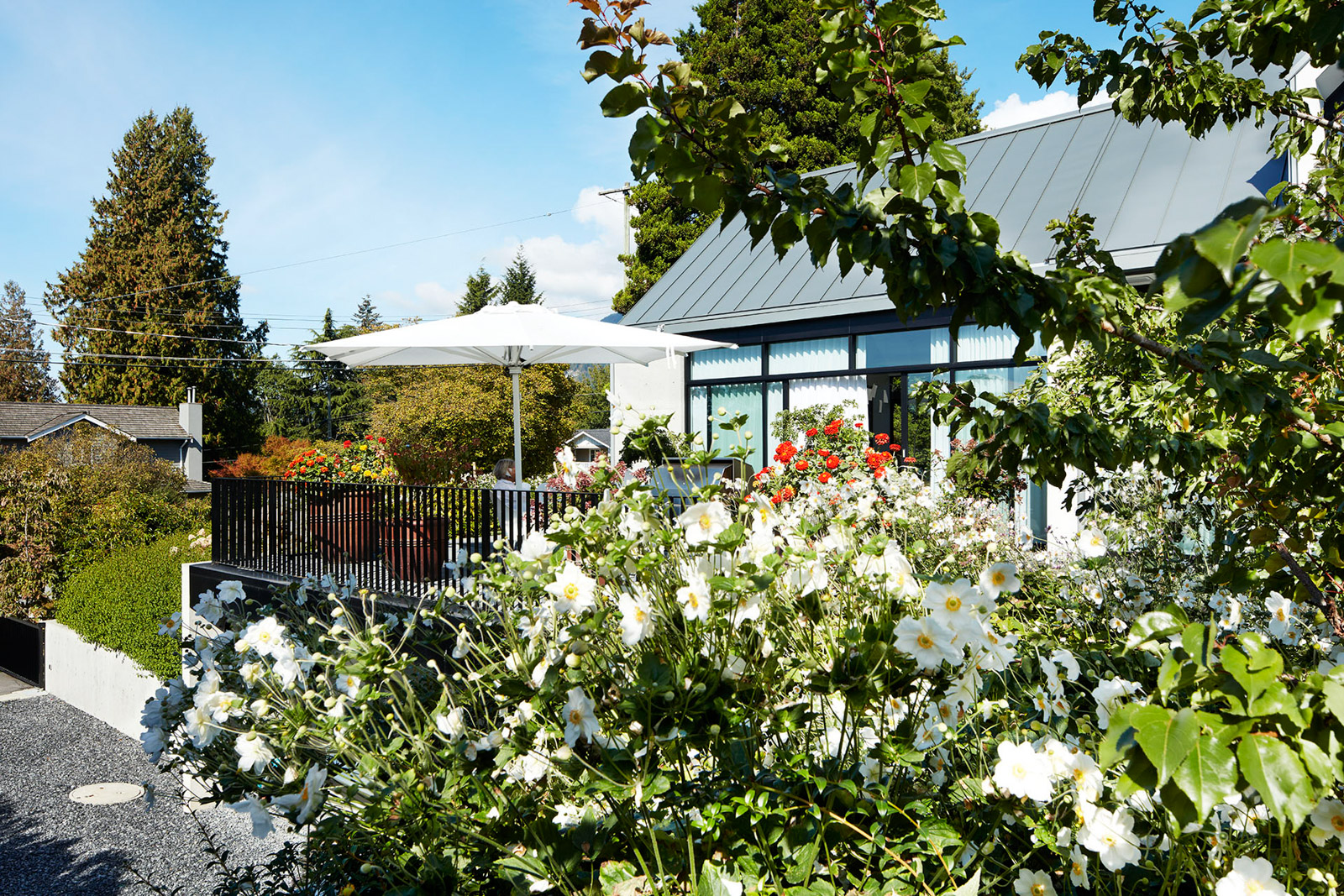