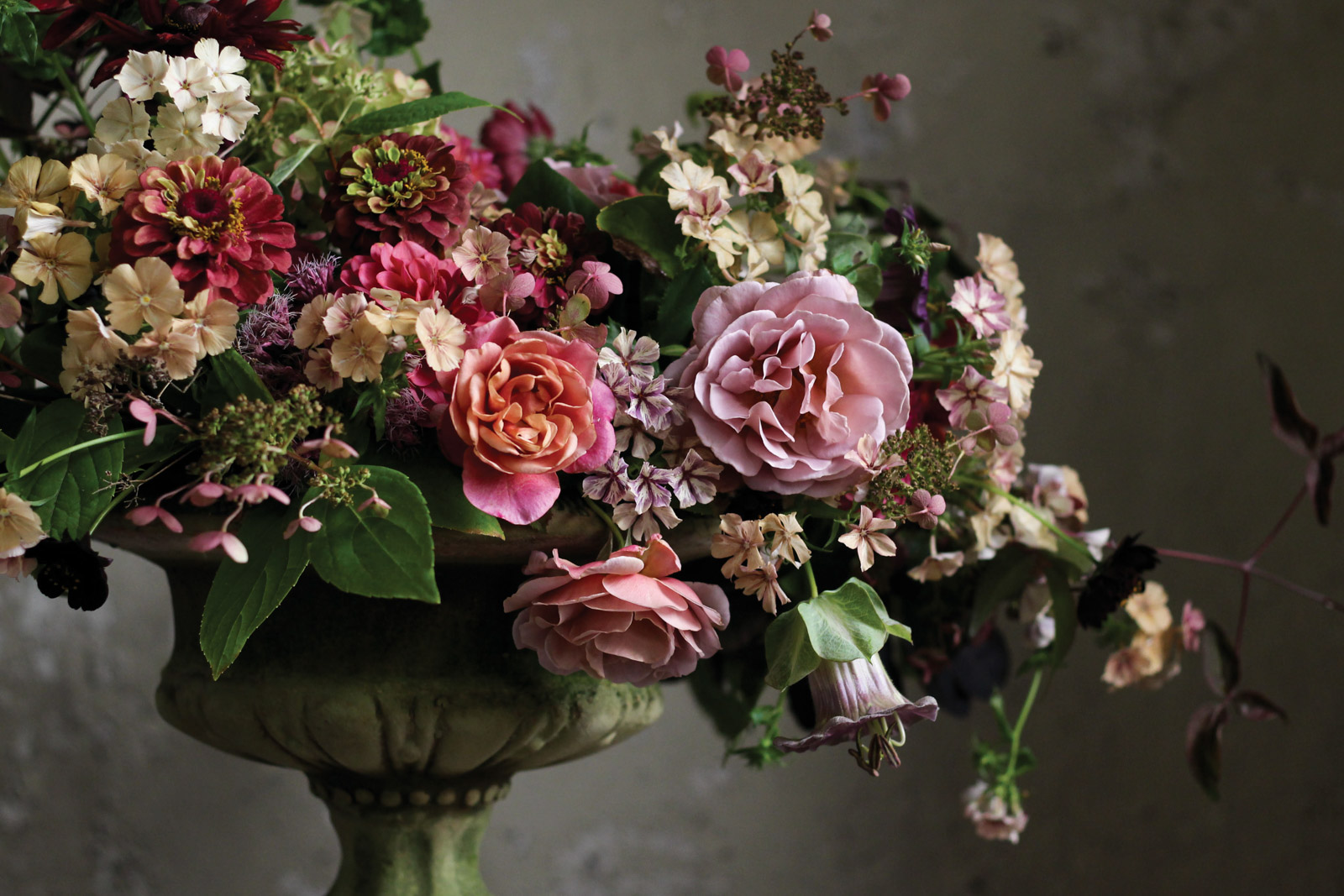 For all its splendour, floristry has a surprisingly ugly side. Behind the ruffled peonies and whimsical baby’s breath is an industry that, in many cases, celebrates the natural world while simultaneously damaging it.

“It is a little bit of a dark industry,” says Becky Feasby, Canadian ambassador for the global Sustainable Floristry Network and owner of Calgary’s Prairie Girl Flowers, where she runs workshops on sustainability in floral design. “Because what you see out there is so much beauty, and it all seems to be a real reflection of nature, but it’s not in many cases.”

From the carbon footprint generated by flying in faraway flowers to the harmful chemicals often used and the way many bouquets are finally packaged, the industry has some soul-searching to do, say a growing number of florists now striving for sustainability.

First, there’s the demand for specific varieties that we can’t always grow in the northern hemisphere and are therefore sourced from countries with southern climates such as Colombia, Kenya, and Ecuador. “People have totally lost the connection to seasonality,” Feasby says.

In 2018, environmental researcher Brandon Graver estimated that flying roses from Colombia to America emits approximately 360,000 metric tons of CO2 every year. “To put this number into context,” he writes, “according to the U.S. Environmental Protection Agency, a forest larger than the area of Houston would be needed to sequester that amount of carbon.”

The floristry industry’s global supply chain is “really problematic,” says Christin Geall, author of Cultivated: The Elements of Floral Style. “For example, the top place that Russia buys roses from is Ecuador. Even though they’re grown in Africa, a lot closer to them, it’s cheaper for them to buy Ecuadorian. So everything is shipped all around the world.” 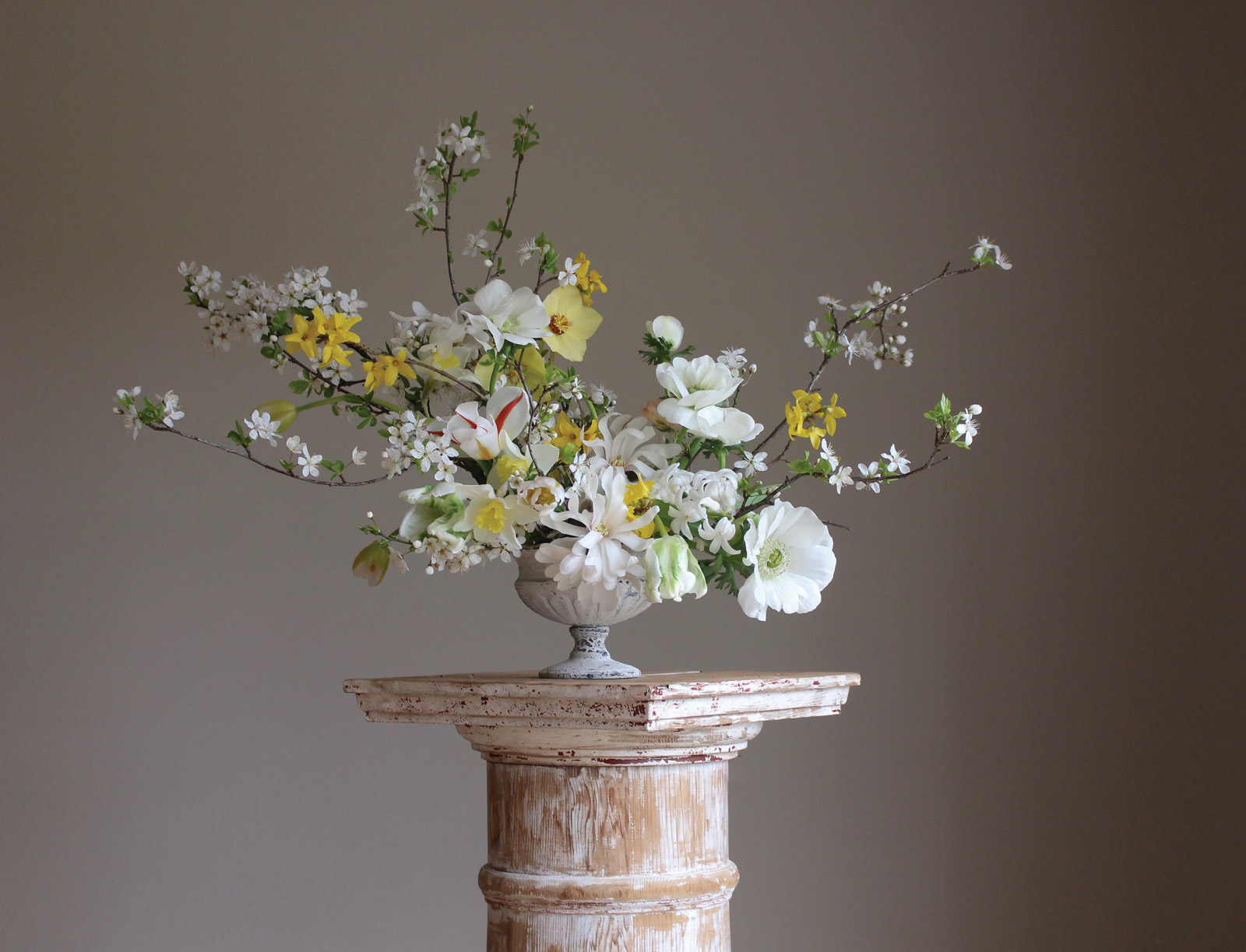 While there are year-round growers north of the equator, many, including Feasby, are critical of the energy required to heat their greenhouses whose impact may be equivalent to or even worse than imported flowers. “The only sustainable flowers are local and field-grown,” Feasby maintains.

And then there’s the mountains of waste. From unrecyclable cellophane sleeves to individually wrapped roses, traditional floristry has a plastic problem, with an estimated 100,000 tons of plastic waste produced every year.

The most worrisome of these plastics is floral foam, a material used to anchor stems in elaborate arrangements and which breaks down into microplastics that become part of the soil or ingested by sea life. “If there’s one thing you could do to be more sustainable, it would be to get rid of floral foam completely,” Feasby says.

One toxic trend that has gained popularity in recent years, thanks largely to minimalist and plant-crazed Pinterest and Instagram accounts, is decorating with bleached and dyed plant materials. Greenery, like the deep emerald leaves of Italian ruscus, are stripped of their colour in favour of a more airy, delicate style. And while the result is admittedly pretty and conveniently long-lasting, the process requires extensive use of a cocktail of harmful chemicals. 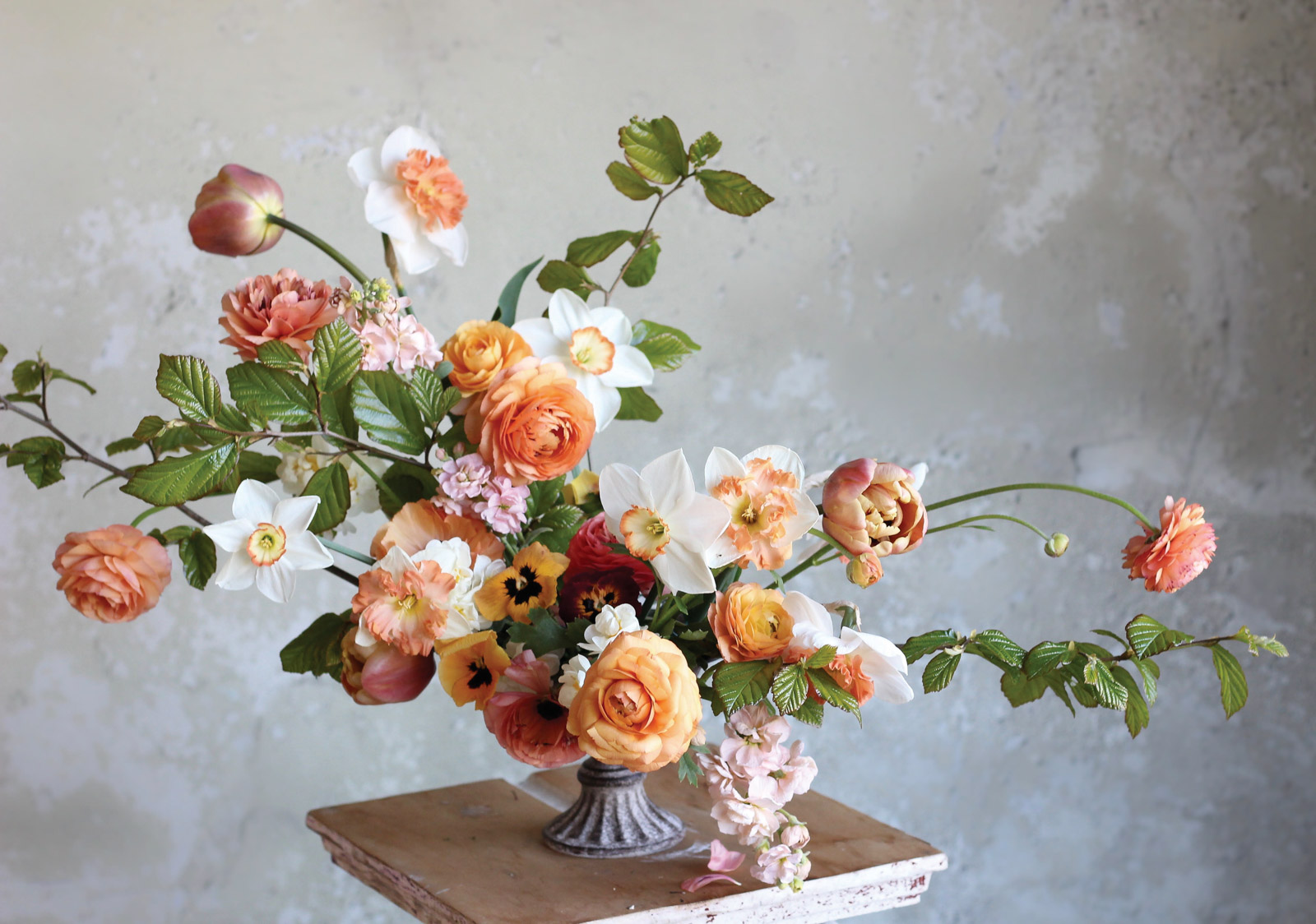 While the current design aesthetic favours a more romantic look, “that real hipster-looking stuff” is concerning, Geall says. “If you’re using dried pampas grass or some of that really light and pale grassy-looking stuff, those things have actually been bleached and plasticized in some cases.”

But if the environmental implications of a simple bouquet can seem overwhelming, it doesn’t mean you have to stop buying flowers altogether. An increasing number of florists are helping the industry grow in a more sustainable direction, and a handful of them can be found right here in Vancouver.

When Full Bloom does purchase flowers from overseas, co-owner Chelsea Leach says she chooses growers who are Rainforest Alliance or VeriFlora certified. “It does become difficult. That’s where we look to Holland—they have really high standards in how they grow their flowers.”

Leach is transparent about the concessions the studio occasionally has to make. While Full Bloom generally uses moss instead of floral foam and avoids bleached products, sometimes using foam is unavoidable, she says. “Like being on a diet, you don’t want to say I can’t eat anything; you’re going to want to have a chocolate every once and a while. As long as it’s not a main staple in my shop, I feel like I’m doing my job.”

Last fall, Kamila Alikhani launched Bloomiér, a zero-waste flower service in West Vancouver. Alikhani was inspired to start her own business after seeing first-hand the alarming amount of waste produced in the flower shop where she worked part-time. She says her employer, like other florists, was under constant pressure to keep the storefront stocked to appeal to customers, filling the space with blooms that wouldn’t all get purchased. 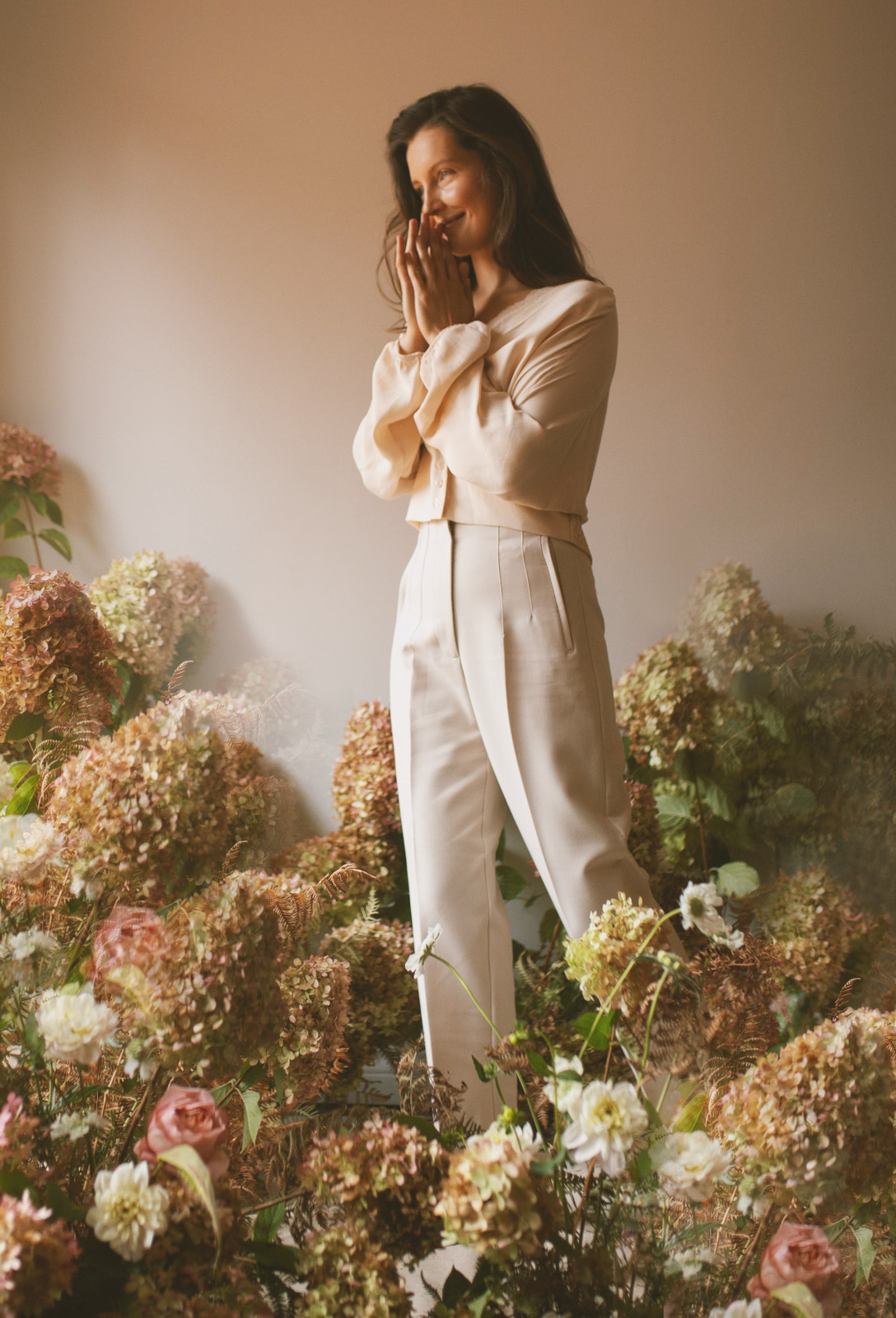 Determined to create a different model, Alikhani made Bloomiér a subscription-driven private studio to avoid excess organic waste. When she does have leftover bouquets from an event or photo shoot, she donates them to seniors homes and hospices.

Bloomiér also sources from local growers, including the Front Yard Flower Co. and Vancouver’s Nogori Flowers, and avoids using floral foam and plastics—though, like Studio Full Bloom’s Leach, Alikhani admits she’s not perfect. “I had to say out loud that we do use some imported flowers because you would not be able to survive as a business in the winter.”

Alyssa Sager, founder of Kitsilano’s Hawaiian-inspired Leis de Buds, is also on a mission to shake up traditional floristry. “Why would something fly from South Africa, Malaysia, the Middle East, to Vancouver, B.C., just to die in a vase a day later?” She refuses to purchase flown-in florals, opting for those that can be driven instead. 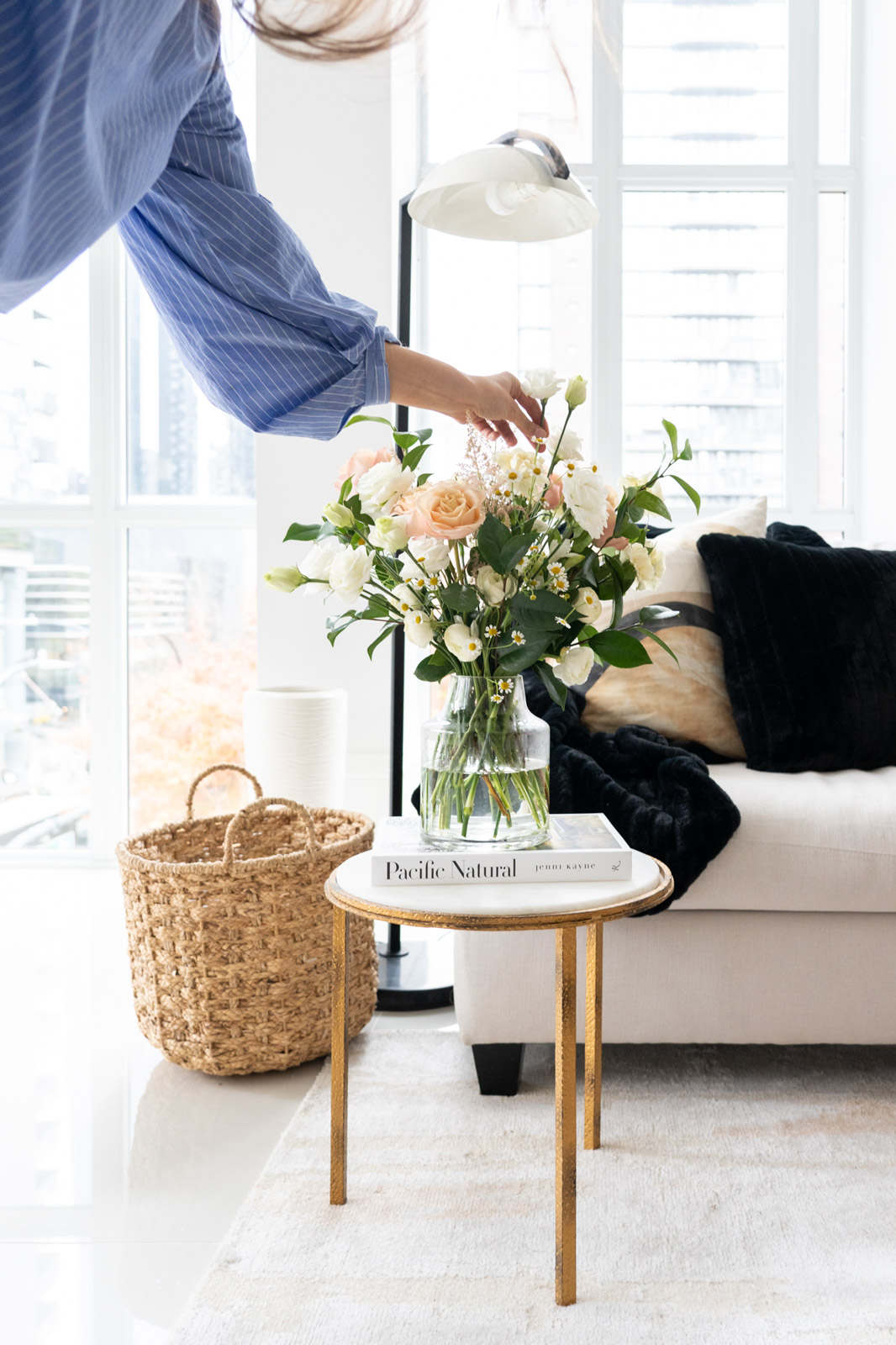 Whenever possible, she sources local field-grown flowers, but when that’s not an option she looks south—you won’t find stems from outside North America at Leis de Buds.

Prioritizing seasonality means Sager often finds herself saying no, both to wholesalers offering her product from overseas and to customers looking for exotic or out-of-season blooms. “There’s an easy way and there’s a hard way, and I’ve never taken the easy way. It’s just not my style,” she says.

All Leis de Buds arrangements are wrapped in 100 per cent recycled paper, its stem wraps and flower food sachets are backyard compostable, and the lei boxes are made of plantable seed paper. Sager has also sourced a new, fully degradable alternative to floral foam.

When customers request flowers Sager doesn’t offer, she sees it as an opportunity to talk to them about how floristry typically operates and why she does it differently—making a point to do so without virtue shaming. More often than not, people are receptive, she says. 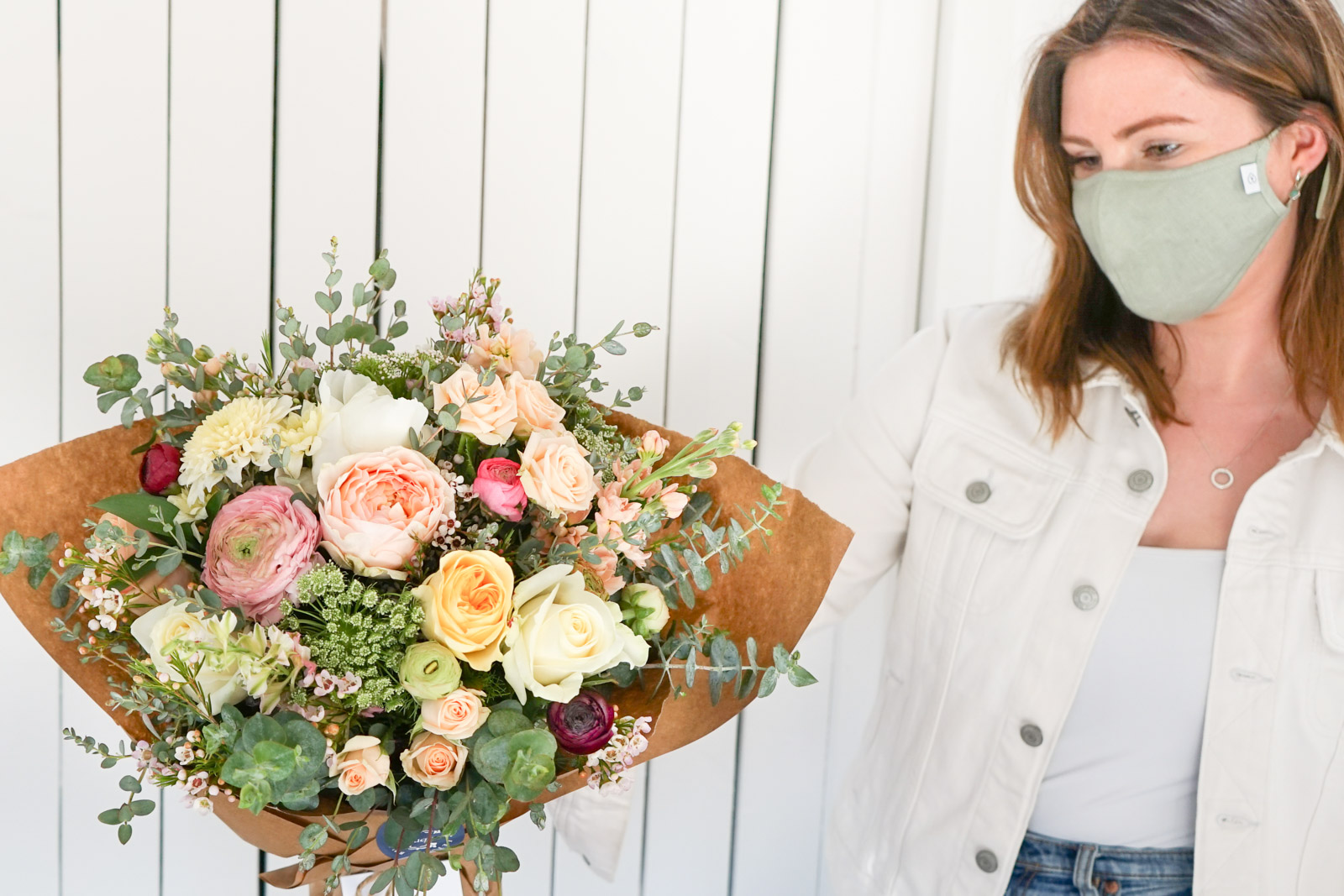 This public education is an important piece of the puzzle for the sustainable flower movement. “Consumer education is really slow to happen and needs to happen,” author Geall says.

The floral industry is far behind food,” she notes. “While the slow food movement has progressed, the slow flower movement, while it has started, isn’t the same… People expect a lot more from flowers—they expect them to last a lot longer than the arugula they’re going to serve for dinner.”

While these conscious florists are playing an important part, chances are if brides continue to request unseasonal bouquets, and influencers keep promoting their bleached arrangements on social media, there will be businesses willing to sell that to them. But Sager is optimistic, pointing to younger generations who are demanding more responsible business practices from all industries. Eventually, other florists will have to evolve to keep up with ethical expectations—not to mention the increasingly urgent needs of our planet.