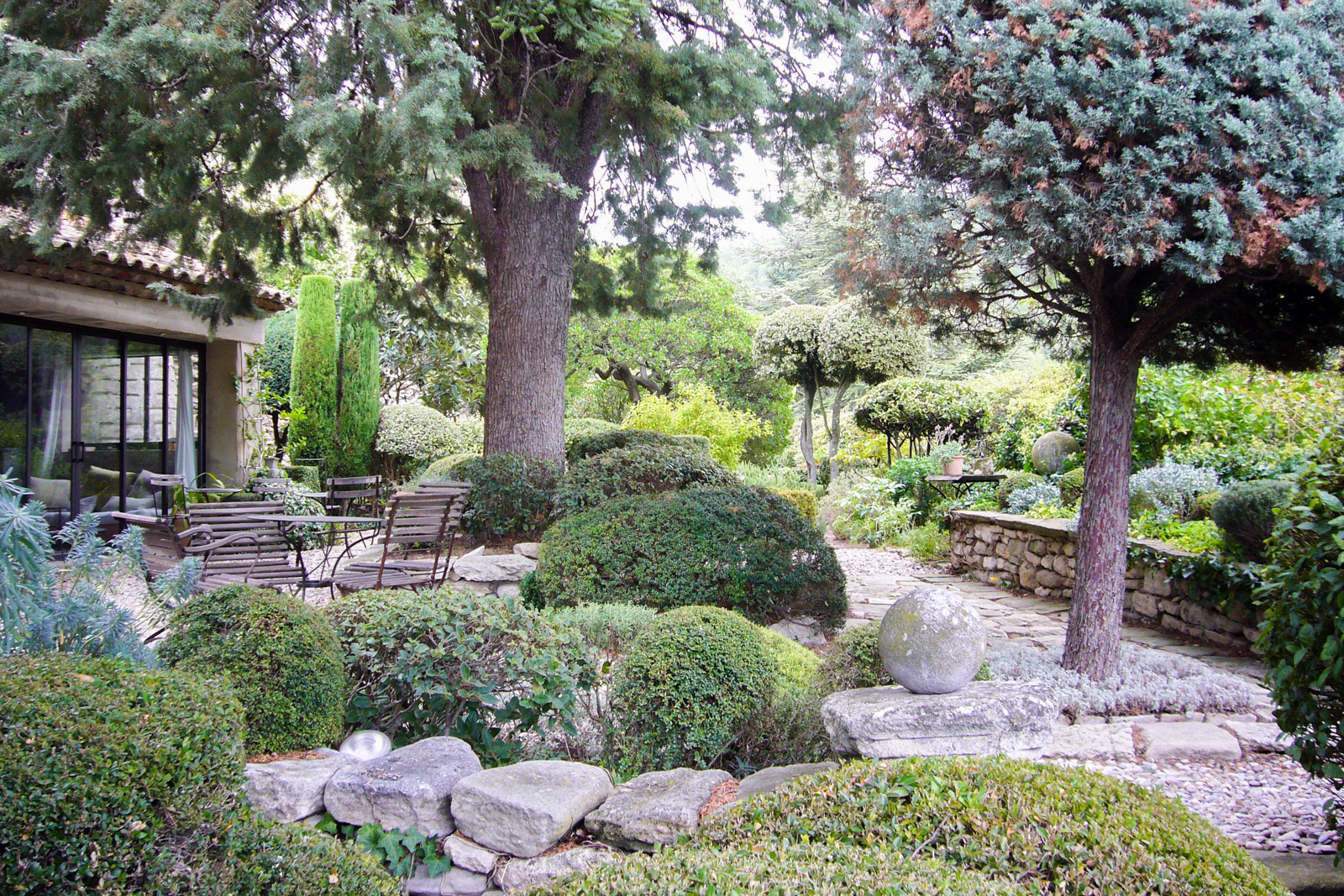 The French garden of La Louve. Photo by David Pfeiffer.

When enthusiasts profess their love for French-inspired gardens, they are usually talking about one of two distinct styles separated by 350 years of history. The first is the formal French garden of the 17th century, the exclusive purview of kings and their courtiers (think Versailles and its precursor Vaux-le-Vicomte) whose divine mission was subjugating nature, a practice reflected in vast decorative landscapes laid out geometrically and featuring, among other extravagances, cascading staircases, intricate parterres, elaborate fountains, and statuary.

For all their jaw-dropping grandeur, the elements of formal French gardens hold little sway over 21st-century North American gardeners—with the exception of maybe their two most frequently hijacked features: the iconic Versailles tub and the parterre, which is easy to shrink and replicate, even on a duplex lot.

The modern, more everyman-scale Provençal-style garden can be traced back to 1986 and La Louve, a terraced affair in Bonnieux, one of most picturesque hilltop villages in Provence. 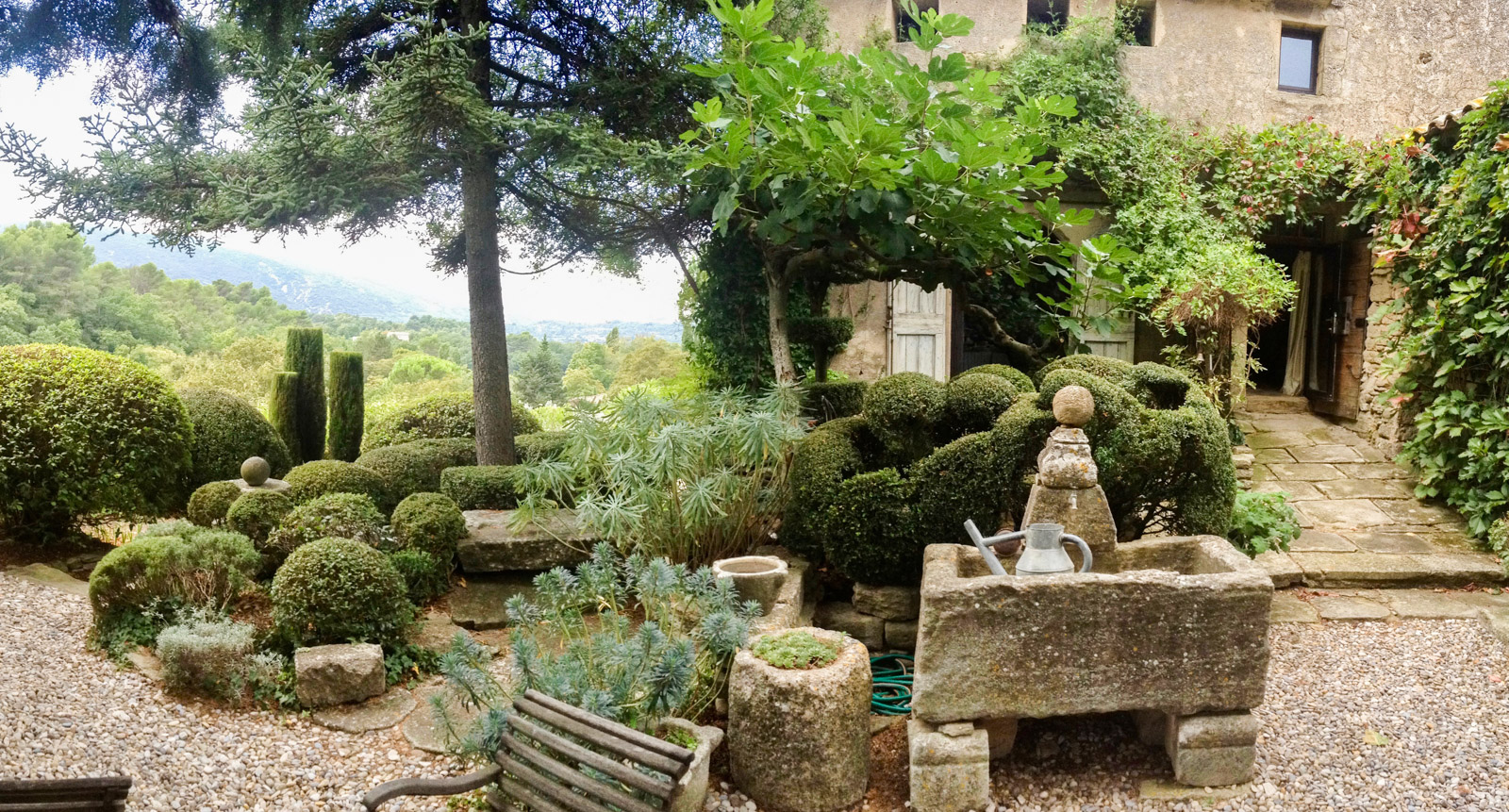 Sprung from the septuagenarian mind of Nicole de Vésian, a former Parisian “it girl” and designer/stylist for the luxury brand Hermès, La Louve became an instant hit with lifestyle magazine editors around the world when photographs of it first appeared in print.

From the 1990s onward, talented Provençal designers have borrowed and built on de Vésian’s clipped and glorious vision, turning it into a movement that continues to capture the imagination of acolytes everywhere for its easy-to-read, high-impact, and readily repeatable features, a few of which are explained and pictured here.

It’s a green world after all

While beautiful English gardens depend upon perennial borders and their multicolour progression of blooms for impact, Provençal gardens stun with a quieter mix of green and grey mostly evergreen trees, shrubs and herbs. These elements are either clipped or left untamed for architectural interest or affect, and set out in subtly contrasting ways that create what buffs refer to as green tapestries. 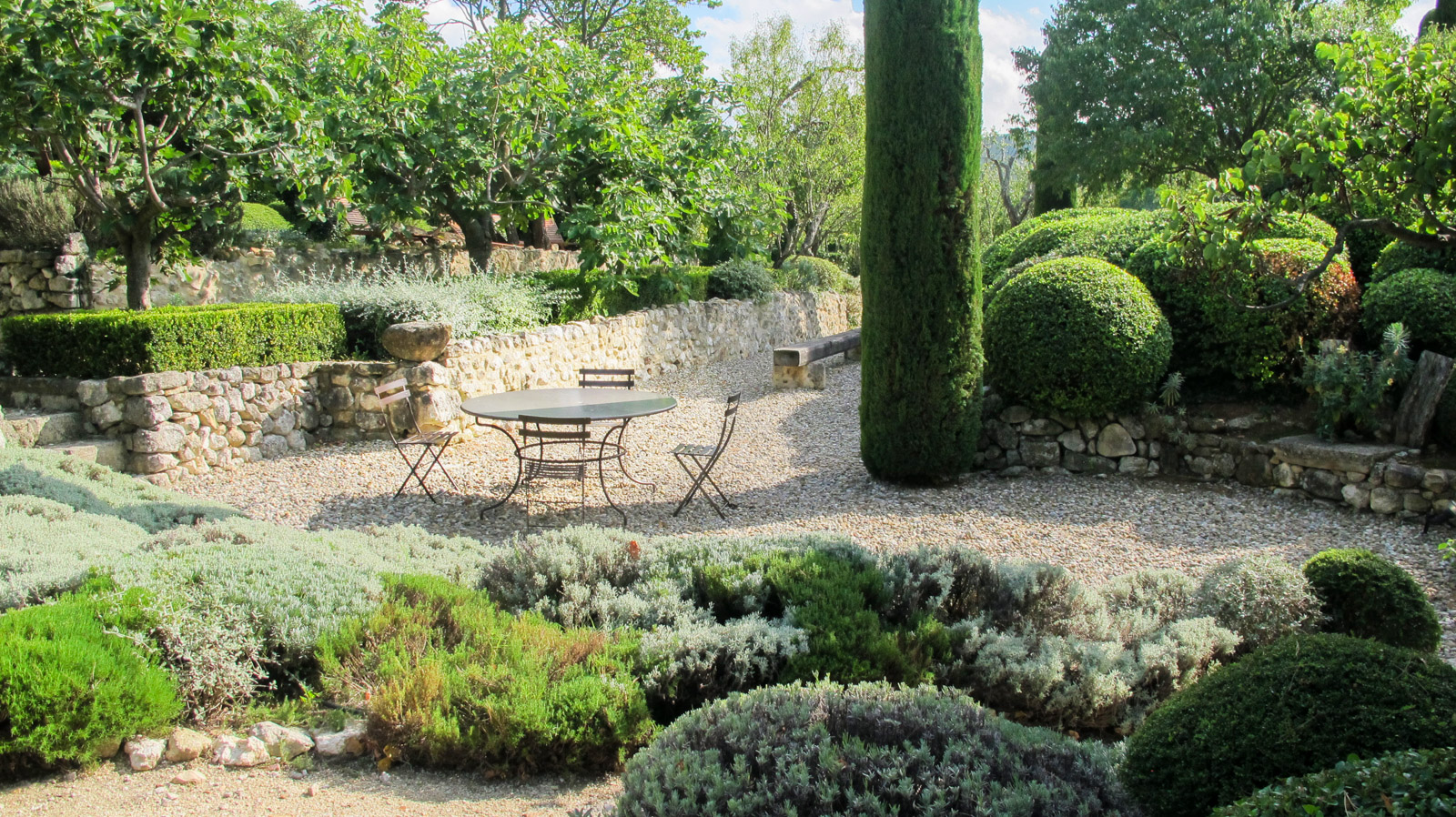 Local garden lovers might balk at all the sculpting and pruning, but think about it for a minute. Carving away at plants is no more labour intensive than other gardening chores, and a small price to pay for guaranteed year-round interest.

A few thoughts on pots

In Vancouver, we are inclined to cram our random clash of garden pots with a diversity of plants with contrasting characteristics that compete with one another for attention. This North American notion of “potscaping” is not highly prized in the South of France, where top designers prefer to work with multiples of a single unobtrusive container type, often in the same size and planted with an identical, solitary material. 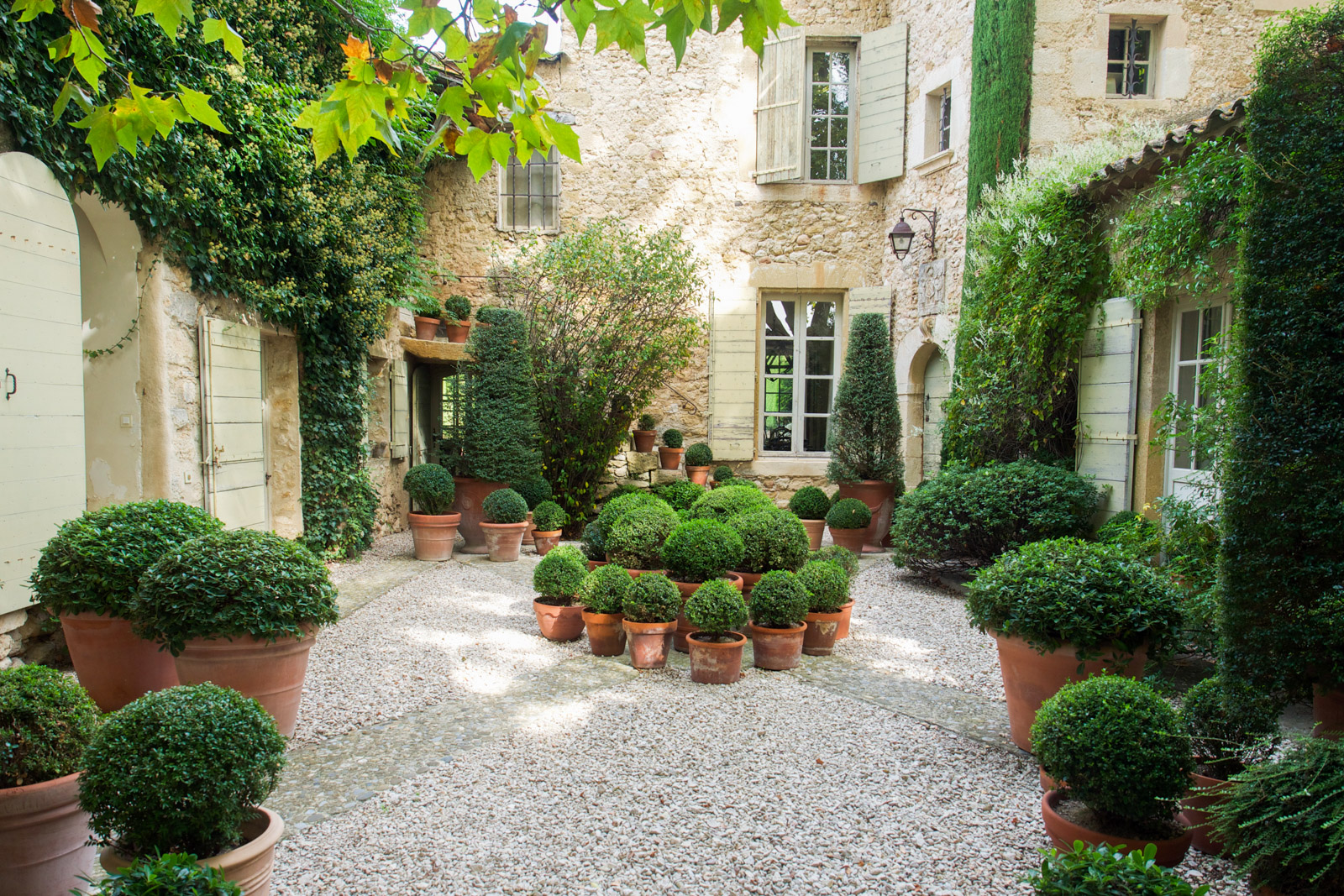 The Catroux garden in Provence. Photo by Carolann Rule.

This arsenal is then deployed for mass impact. A knockout example of the tactic is the entry courtyard at the one-time holiday home of the late, legendary interior designer François Catroux and his wife, Betty, a former Yves Saint Laurent model and muse.

The most obvious way to make your garden feel South-of-France French is to introduce gravel somewhere. Crushed stone is synonymous with Provençal gardens, and it plays out in the pea pebbles found on narrow pathways and wide patios often inset at pivotal points with large flat slabs or smaller purpose-made patterns of local stone. 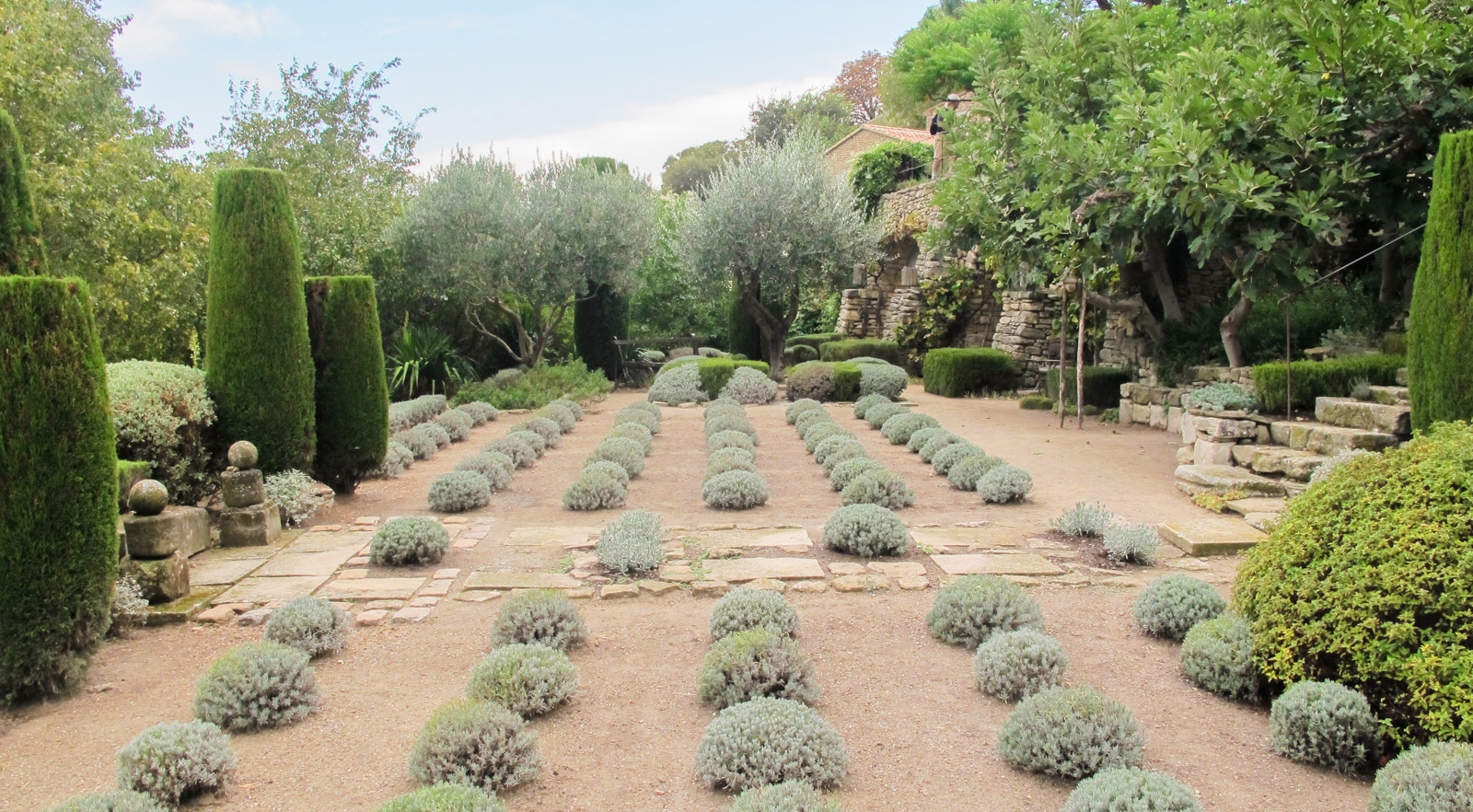 Easier underfoot than mortared stone, gravel is also an ideal foil for greenery—and a concrete way to visually minimize weathered wooden or wire-legged outdoor furniture, the way it does at La Chabaude.

(It goes without saying that gravel is also a solid drainage assist in our rainy corner of the continent.)

We need to talk about lavender

The lavender associated with the Provençal countryside, those great rolling waves of deep purple that call out from travel websites, is not the lavender setup you find in posh private gardens, where sophisticated owners tend to grow lavender in the more graphic style found at La Louve.

La Louve’s scaled-down lavender field is interesting most days of the year. To make this happen, Nicole de Vésian placed her evergreen perennials far enough apart that every plant reads individually. She then hard pruned each herb into an attractive sphere that will grow up and into a manicured pouf that eventually bursts into bloom, the wispy tips of its flowers finally brushing up against all of its neighbours. After this show, the plants are returned to their former baby shapes, and the cycle repeats itself. 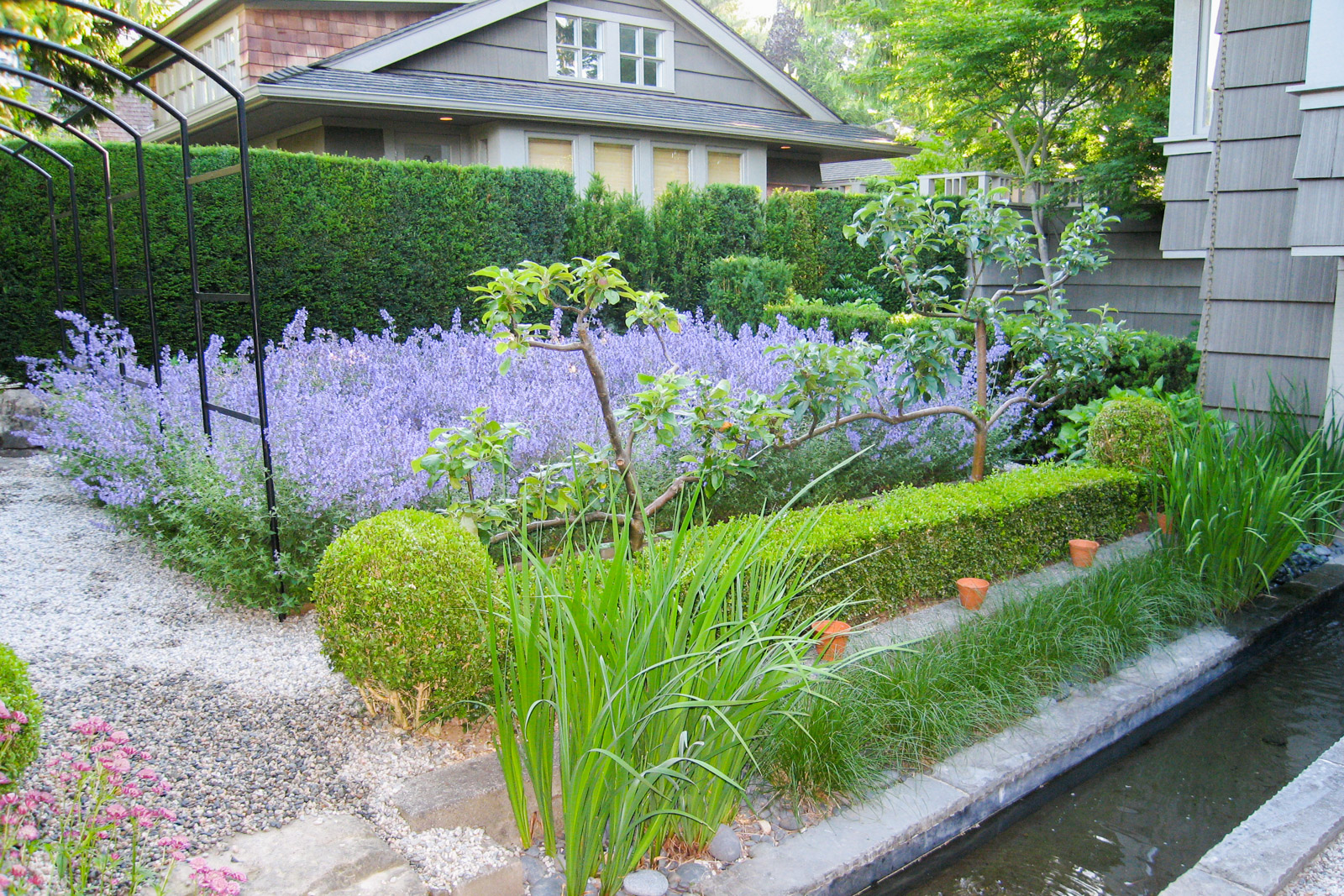 You could recreate de Vésian’s extravaganza locally; it would not be impossible to do. Then again, you could just fake the whole effect as we did in our own backyard where we planted a mini-field full of lavender-look-alike lacy nepeta, which is a lot less fussy than lavender, blooms summer through fall, and always makes us feel as if we’re on vacation.