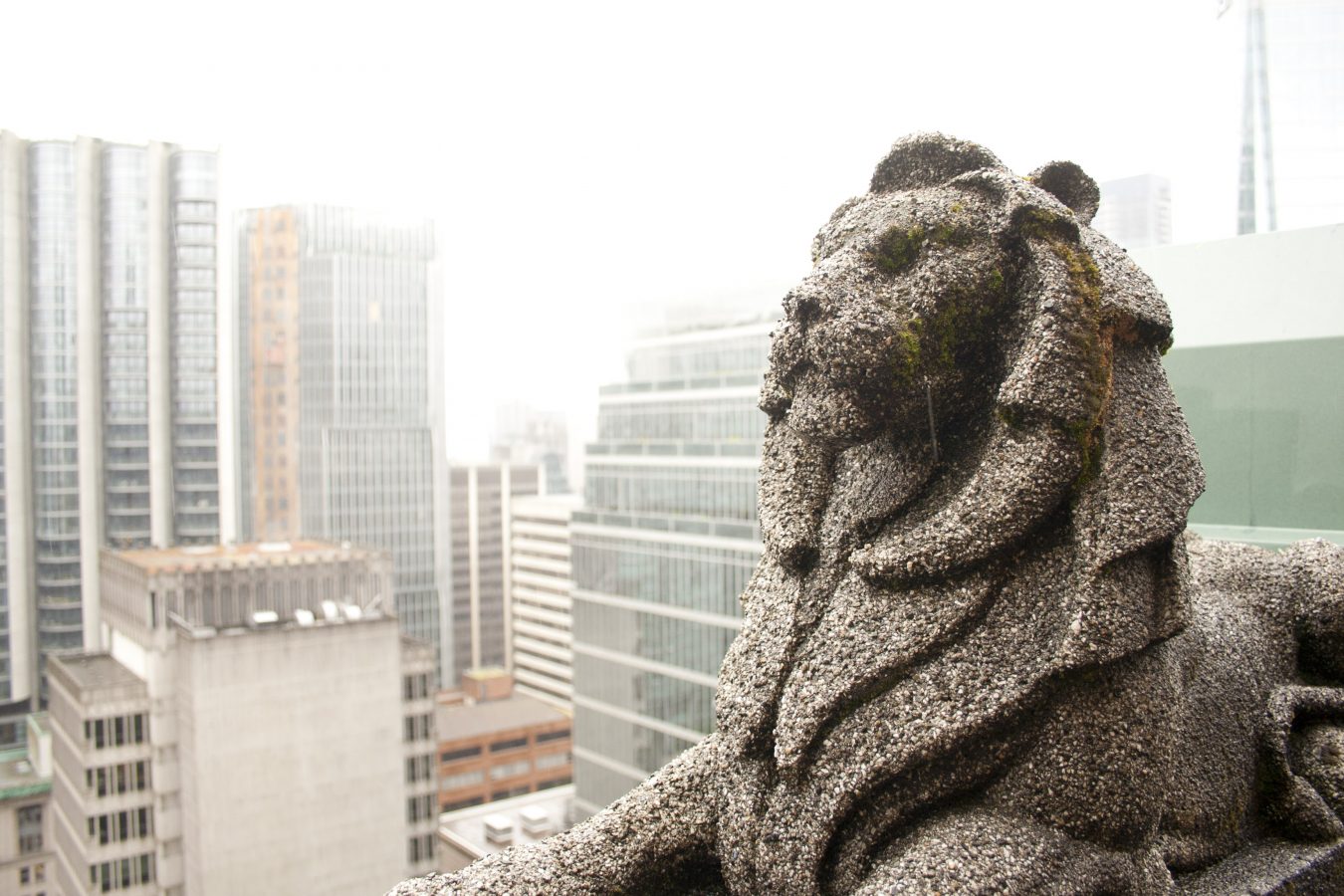 Even though it is tucked away between the glass-walled skyscrapers of Coal Harbour, there are few Vancouver structures more legendary than the Marine Building.

“It’s always been this hidden gem in the middle of the city,” says Chuck We, Oxford Properties vice president of leasing, and an 18-year veteran of the building. “You get architecture students coming up from all over North America to study the details in it. There are stories in every little detail. And it’s hard not to get caught up in it.”

Since it first opened its doors in the fall of 1930, much has been made of its art deco aesthetic, its opulent lobby, its brass revolving doors, and its engrossing architectural details tucked into out-of-the-way places (the wood inlay in the elevators, for example, or the ship-shaped wall sconces and terracotta trim). It’s been studied by generations of historians and architects. It’s even been made to look positively superheroic on the silver screen, appearing as everything from the Daily Planet to the Baxter Building. But some of the structure’s most fascinating elements are the ones that are tucked away from public view—a host of treasures from years gone by, from the penthouse (built as an observation deck during the Depression, which once boasted one of the best views in the city), to the four subterranean levels below Cordova Street, sealed off since 2005.

“I’d always wanted to be in that building,” explains Allisun Rana, head of Rana Law, the penthouse’s current tenant. “In the early 2000s, I remember going to a meeting in the building and thinking, ‘Wow. This is where I want to be one day.’ My background is in Canadian history, and our Calgary office is also in an historic building. For me, the link to our history is really important, and I’m really glad these historic spaces are being preserved.” 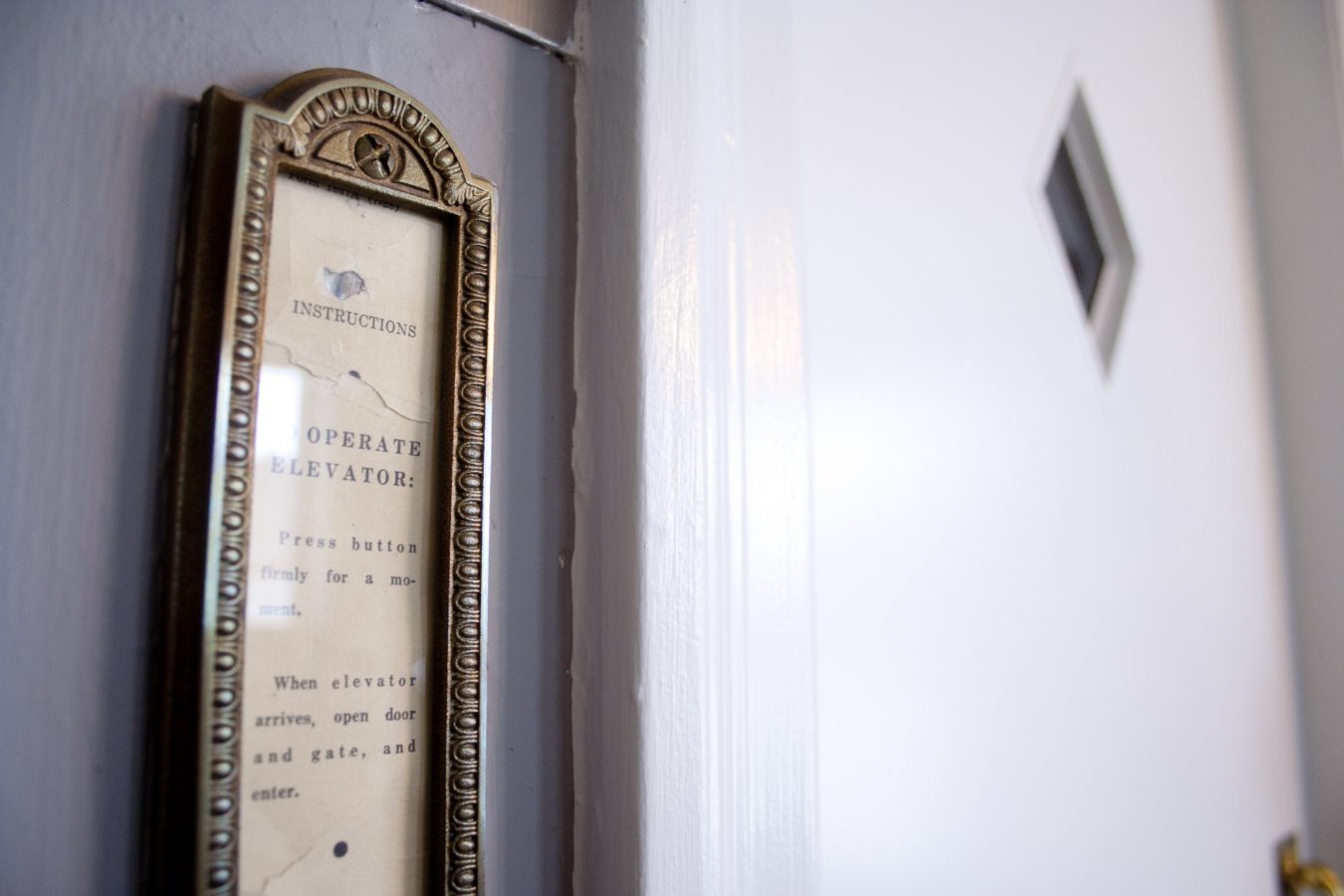 Just below the lobby, down several flights of stairs and through a set of locked doors, is one such historic space. Known as levels A through D, these underground layers offer a profoundly strange experience. It is eerily silent down here, and cut off from sunlight since the elevation of Cordova Street; a glance out the windows reveals an orange-hued world of SkyTrain tracks and elaborate graffiti. While they’re now used for storage purposes, the 1930s-style offices were once home to a variety of businesses, including a print shop (one of the longest-running tenants), and those original flourishes are still evident, lumped in amongst a mishmash of cardboard boxes, maps, and construction equipment. And as We explains, since the building was constructed near the edge of the original Coal Harbour shoreline, those first tenants would have had quite the view.

“Back when I took over the building, those levels were above ground,” We says. “And you had a view all the way to the ocean. But when the Cordova viaduct was built, all of those levels became subterranean. It’s like a Dick Tracy detective office down there. Wooden doors with the glass inset… all of that.”

Stories and rumours abound about these forgotten floors—everything from the tale of a workman who cut open a pipe to discover years of forgotten sewage from a second-floor toilet that was never hooked up, to talk of the building’s very own ghost. “I’ve sensed something down on C Level,” We says. “There’s a big map on one wall, and I was down there talking with one of our engineers. And suddenly all the hairs on the back of my neck stood up. And I just got the hell out of there. I think Harry, one of our engineers, has actually seen it. It’s my understanding that it’s a friendly ghost. Nothing bad has ever happened.”

By contrast, the top floor penthouse is the picture of elegance. Featuring—among other things—17-foot-high ceilings, a marble fireplace, floor-to-ceiling windows, and a wraparound terrace, it has been drooled over by generations of Vancouverites since it was transformed into a living and office space in 1933. After the building’s initial owners, G.A. Stimson and Company, filed for bankruptcy in 1931, and were forced to sell their architectural marvel for a paltry $900,000 (a mere fraction of the $2.3 million it cost to construct), the building was sold to the British Pacific Building Co. (an investment backed by the Guinness beer family). The company’s managing director, Fred Taylor, transformed the space into an opulent home for himself and his family, adding a mezzanine level and living there part-time until 1941. In the ensuing years, the space has been home to an assortment of tenants, including Spencer’s department stores, Sun Gold Mining, and developer Phil Boname, and in that time a number of renovations were undertaken—some good, and some questionable. 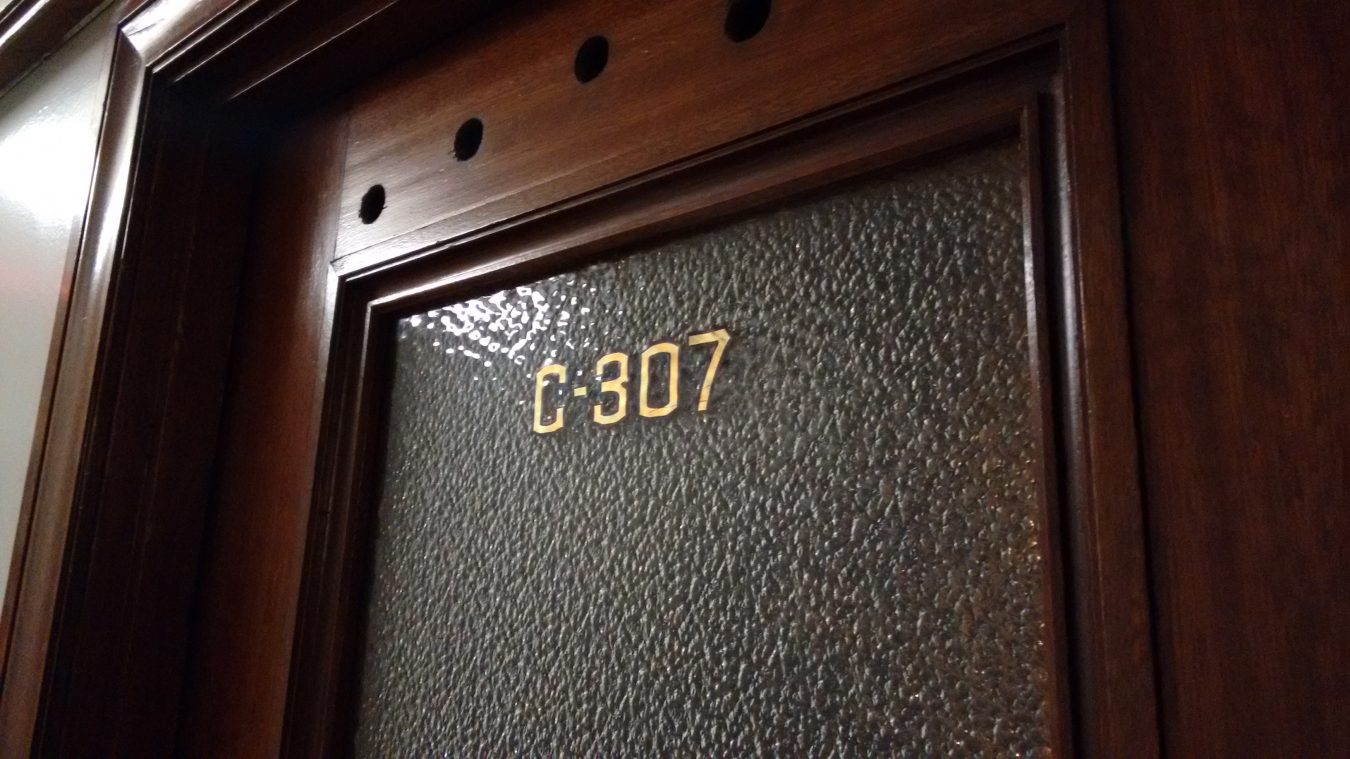 “We first saw the space in the fall of 2014, and I was very disappointed,” Rana recalls. “The place was in a state of disrepair. It was sad to see that it hadn’t been kept up, and it needed extensive refurbishing. It needed new floors, new carpeting, all the wood trim needed repair, the windows were leaking.” Undeterred, Rana—working with Unison Construction—has since restored the penthouse to its former splendour, renovating the mezzanine, repairing the wood trim, replacing the carpets, redoing the kitchen, adding new draperies, and stripping and re-staining the boardroom floor. They even managed to locate and refurbish the boardroom’s celebrated chandelier, which had been removed in the 1980s.

“It’s the original chandelier from 1930,” Rana explains. “It was in the basement of the building, in pieces. And there was this white-frosted, globular, sort of 1980s chandelier hanging there instead. But Unison came across the original chandelier when they were down in the basement. They refurbished it, and reinstalled it in the boardroom. They actually had to make a few missing pieces to make it complete again. It was really exciting for us, because it was like bringing it home.”

Although the view has been diminished by the proliferation of office towers and hotels, the wraparound patio still carries a certain charm, and a few hidden Easter eggs—including miniature versions of the iconic lions constructed for the Lions Gate Bridge (the Guinness family also owned the bridge).

Then there is the mezzanine bathroom, an art deco masterpiece featuring vintage green tile, a tiny shower, and even a button set into the wall that was once used to summon the help. 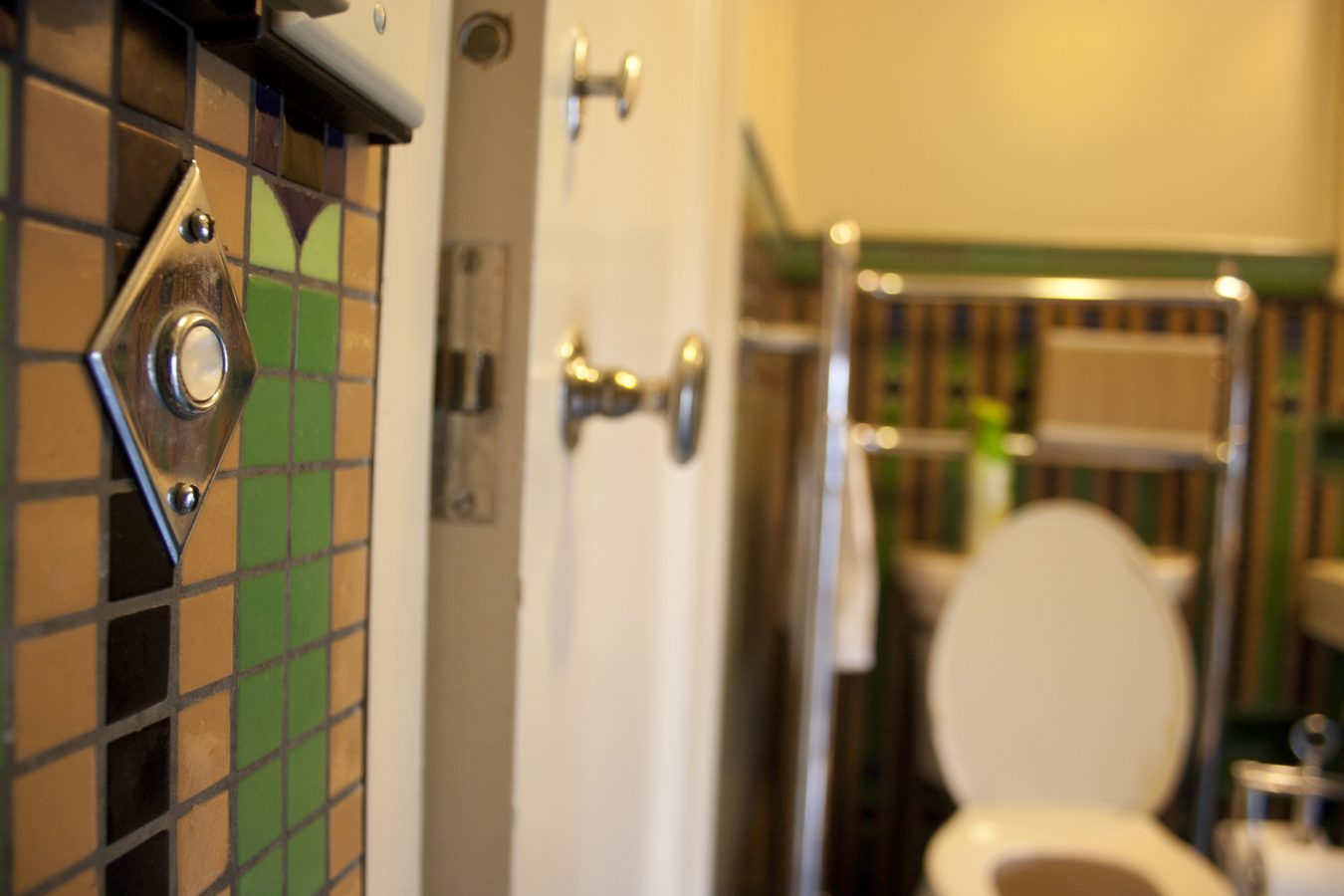 “That’s heritage tile,” Rana laughs. “That’s original. There’s even a rumour that the Queen bathed in there. So there’s no way—as gaudy as it is—that we would ever touch it.” Because for Rana, the history of the space is as important as the architecture—a standout in a city of glass, a unique triumph from a long-gone age with more than its share of secrets.

“Everyone appreciates how unique it is,” she says. “Our clients definitely respond to the beauty of the space. You walk through those revolving doors, and you’re transported in time.”

This story from our archives was originally published on July 27, 2017. Read more stories of Hidden Vancouver.