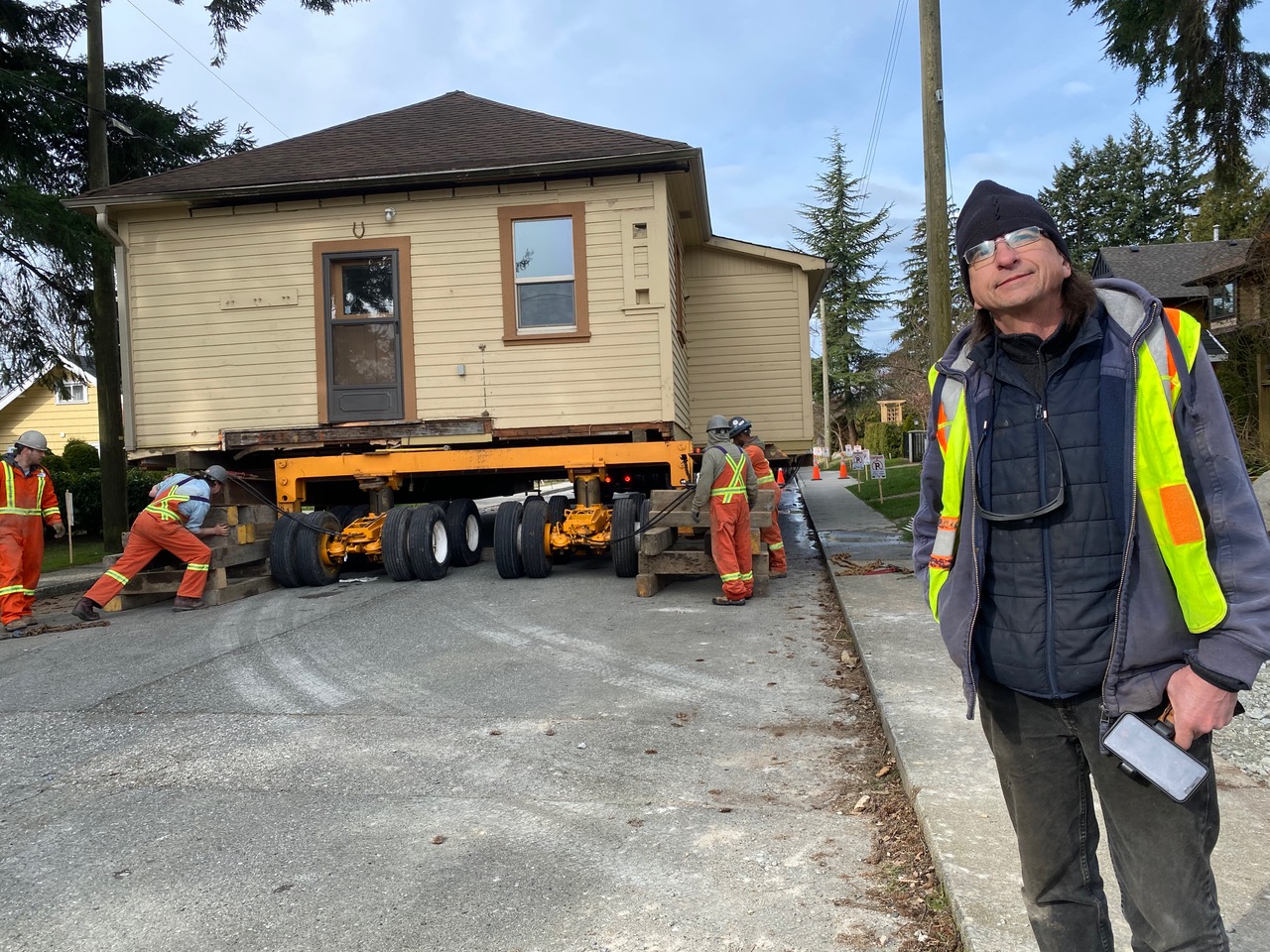 Tony Dean and Yvonne Perrault have deep roots in North Vancouver. Not only did they both grow up there, but their mothers, Stella Jo Dean and Barbara Perrault, were City of North Vancouver councillors. Yvonne’s father, Ray Perrault, represented North Van as an MLA, MP, and senator. Stella Jo Dean Plaza on 14th off Lonsdale and Ray Perrault Park on Grand Boulevard are within a five-minute walk of the couple’s house.

Make that houses. In March, a 950-square-foot heritage cottage that had been threatened with demolition was moved onto their property from its previous location a few blocks away. It is being lowered onto its new foundation this week. A 1,300-square-foot two-bedroom bungalow, which they currently live in, sits at the back of the 50-by-150-foot lot just off Grand Boulevard. 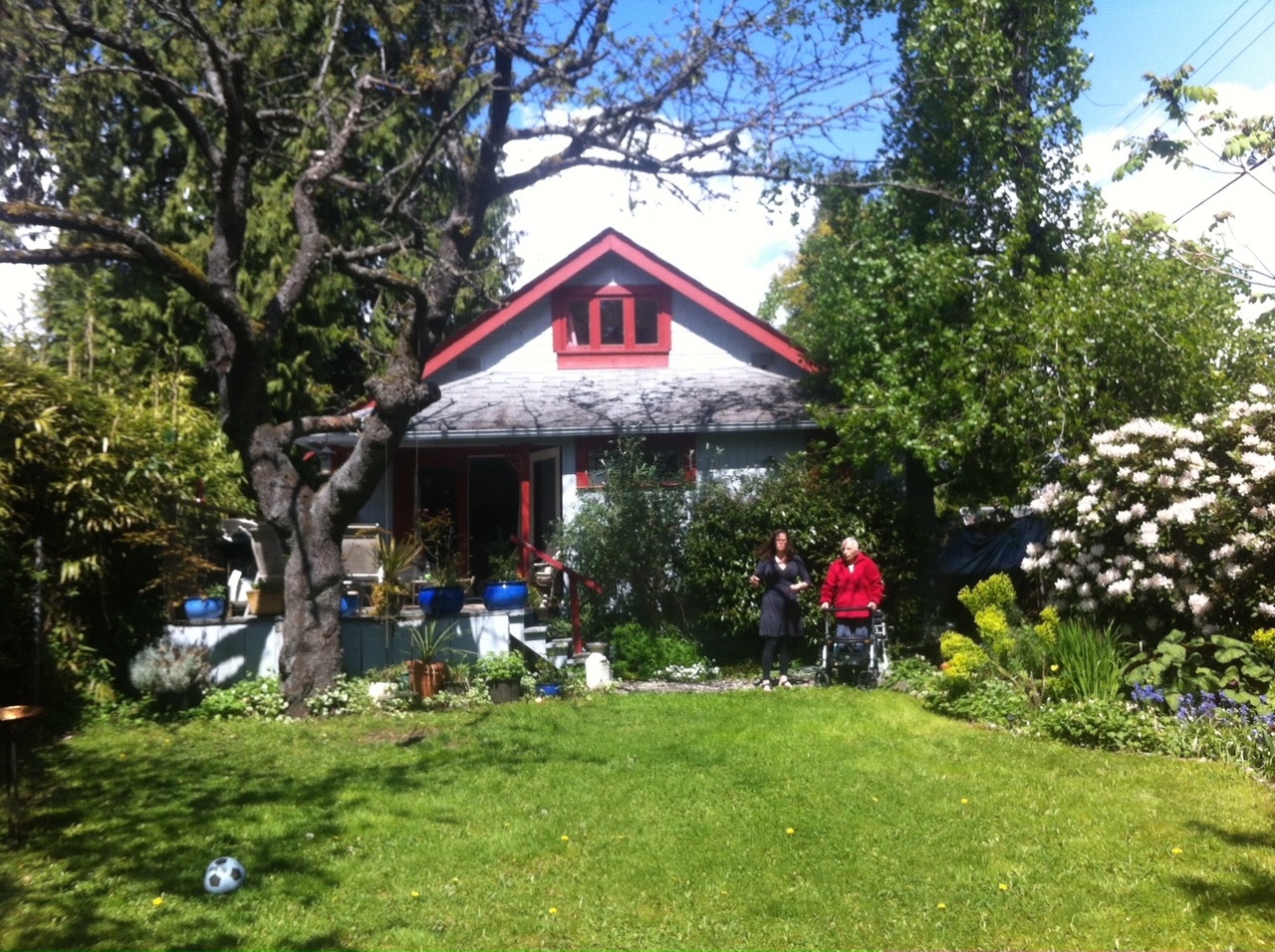 The existing 1916 house already on the property. Image courtesy of Tony Dean.

“My mother bought the property back in 1989 because she loved the big garden out front, but we never lived here,” says Dean. “It was a rental property.” When his mother passed away two years ago, she left it to him and his sister. He and Perrault sold their “stupidly valuable” house in Point Grey, bought his sister out, and moved back to North Van, where other members of their families still live. They were going to replace the bungalow with a new principal house and laneway house, but in early January they saw in the North Shore News that a heritage house known as Copper Cottage needed a new home. “Pretty much overnight,” they decided to change their plans.

“This is a better fit for us” than a new build, says Perrault. “We’re going to live in Copper Cottage, which is now located at the front, and the back one will be sort of like a laneway house. My mum or her partner may live here. They’re getting on in age, and we’re nice and close, and we can be there to help them.” 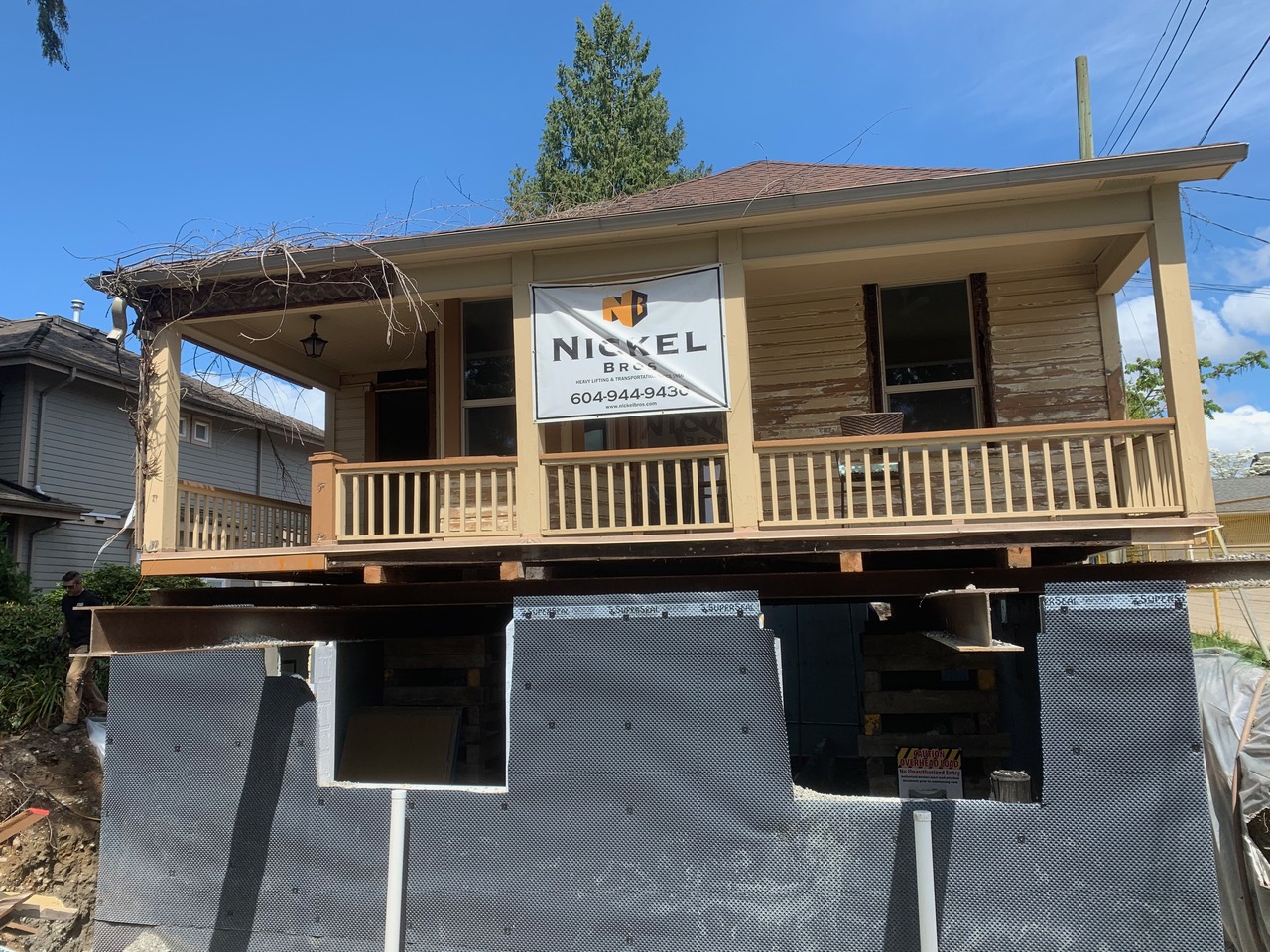 Copper Cottage will be lowered onto its new foundation this week. Image courtesy of Tony Dean.

“We talked to our heritage expert builder and got onto the North Shore heritage society because they were the ones that were trying to find a new home for the house,” Dean explains. Some 60 people were interested in it, according to North Shore Heritage Preservation Society president Peter Miller. “Some wanted to take it on a barge to Vancouver Island. Some wanted to take it away to Coquitlam,” he recalls. “But this man said, ‘I just live around the corner. I’d like to take it.’ And we chose him as being the right person.”

Yvonne Perrault’s six-year-old nephew in Hamilton, Joey, couldn’t believe you can move something as big as a house, so they made a video (videography by Danny Nowak/courtesy of Tony Dean):

Unlike others who would have turned the cottage into a laneway house, Dean and Perrault wanted to place it at the front of the lot. They had also already applied for a development permit and removed a couple of trees in the building envelope. “When it came to picking up this little cottage two blocks away and plonking it down on his property, he already had all the permits and planning procedures in hand, so he was the ideal candidate,” says Miller.

“We went into this with our eyes wide open,” Perrault says. “We both grew up in old homes.” Dean’s childhood home,  Stanmore on East Windsor (which his brother still lives in), was designed by Henry Blackadder, and Perrault lived in the hunting lodge on Somerset built by Alvo von Alvensleben. And, Dean adds, they completely renovated their 1926 Vancouver house over the 30 years they owned it, so they’re not strangers to dealing with buildings where things aren’t entirely square. 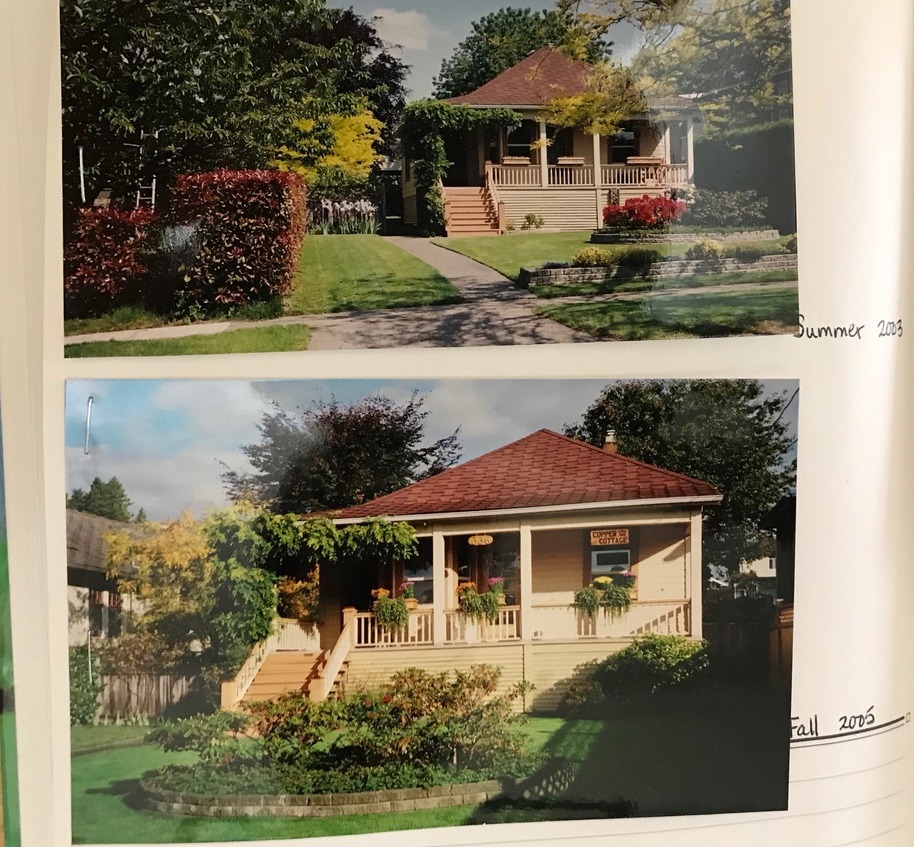 Copper Cottage in its glory, as captured in this photo album by previous owner Audrey Brown. Image courtesy of Tony Dean.

Perrault notes that “the city was very cooperative with us throughout this process because they obviously like heritage, too.”

“They were aware of the tight timeline, and so they made it possible for us to get a temporary use permit,” Dean explains. At the end of February, the couple appeared before city council at a public hearing, where they received unanimous support. The mayor and councillors mentioned it was admirable they were not pushing for maximum density and had saved a couple of dozen mature plants and shrubs.

In return for the temporary use permit, the city requested that the house be designated heritage. It was already on the city’s heritage list, which recognizes its historical significance, but designation would legally protect it from future demolition.

Formally known as the James Residence, it is notable because of its full-width verandah with square columns and open balustrades, which distinguish the simple yet charming cottage, according to the description on the heritage list. The verandah originally wrapped around the west side of the house but has since been enclosed. It was built for Grace James (née Bauer, 1878-1970), of the B.C. Meat Market in West Vancouver, and her husband, William Percival James (1878-1960), a butcher.

The house has now been moved twice. It was originally built in 1907 at 334 East 9th Street, then moved next door to 336 East 9th in 1924, when a basement was added. It was given the name Copper Cottage by Audrey and Dave Brown, who purchased it in 1987 and painted it a golden colour. They received a municipal heritage improvement award in 2013 honouring the ongoing maintenance of a residential heritage building. The Browns lived there for 30 years before selling in 2017. 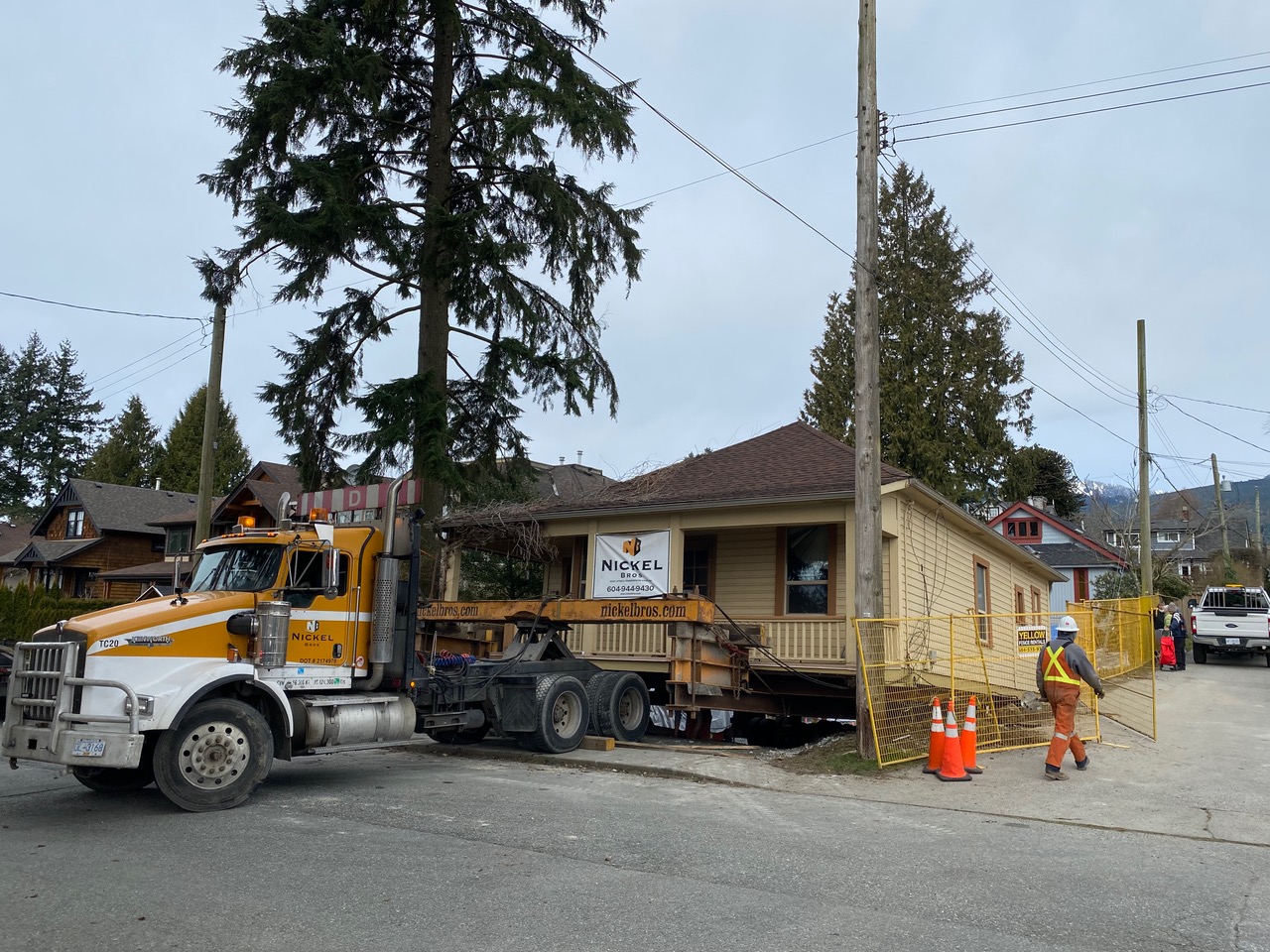 A truck brings Copper Cottage to its new home. Photo by Danny Nowak/Courtesy of Tony Dean.

One of the interesting things about saving a heritage house is that there is no saving in terms of money, Dean notes. “It will probably cost us more than if we had built a similar-size house brand new. It’s a bit of a labour of love.” They had to pay for a statement of significance by a heritage consultant that outlines the building’s historical importance and, in return for permission to live in the house at the back of the lot during construction, agree to make it laneway compliant and post a $30,000 bond. The maximum size for coach houses in the City of North Vancouver is 1,000 square feet, so they would have to make it slightly smaller.

A heritage revitalization agreement with the city could provide a variance that would avoid that, but the process can take six to eight months, Dean explains. So far the city has only issued a temporary use permit to move the house and a manager’s approval permit to get the foundations in and the house lowered. He and Perrault are hoping to get building permits to finish Copper Cottage construction before the completion of the heritage revitalization agreement process.

The dilemma is whether to wait for the heritage revitalization agreement, which would likely provide the variance but also mean delaying construction. The couple is hoping to finish Copper Cottage by the summer, renovate the existing house in the fall, and get the landscaping done before winter.

“Basically whatever’s going to happen fastest,” says Dean. “We’ll have to knock out 200 square feet out of the house, but if it means that we could do it this year, then we would do it.”

On the other hand, he notes, “right now we have a house that’s sitting a foot above the foundation. If we had waited for the typical building permit process to go new, we would at this point have had to have torn down the existing house, have to move somewhere else to live while the construction was going on, and we probably would only be starting to dig a hole about now. So in some ways we’re getting ahead faster than if we had gone the other process.” 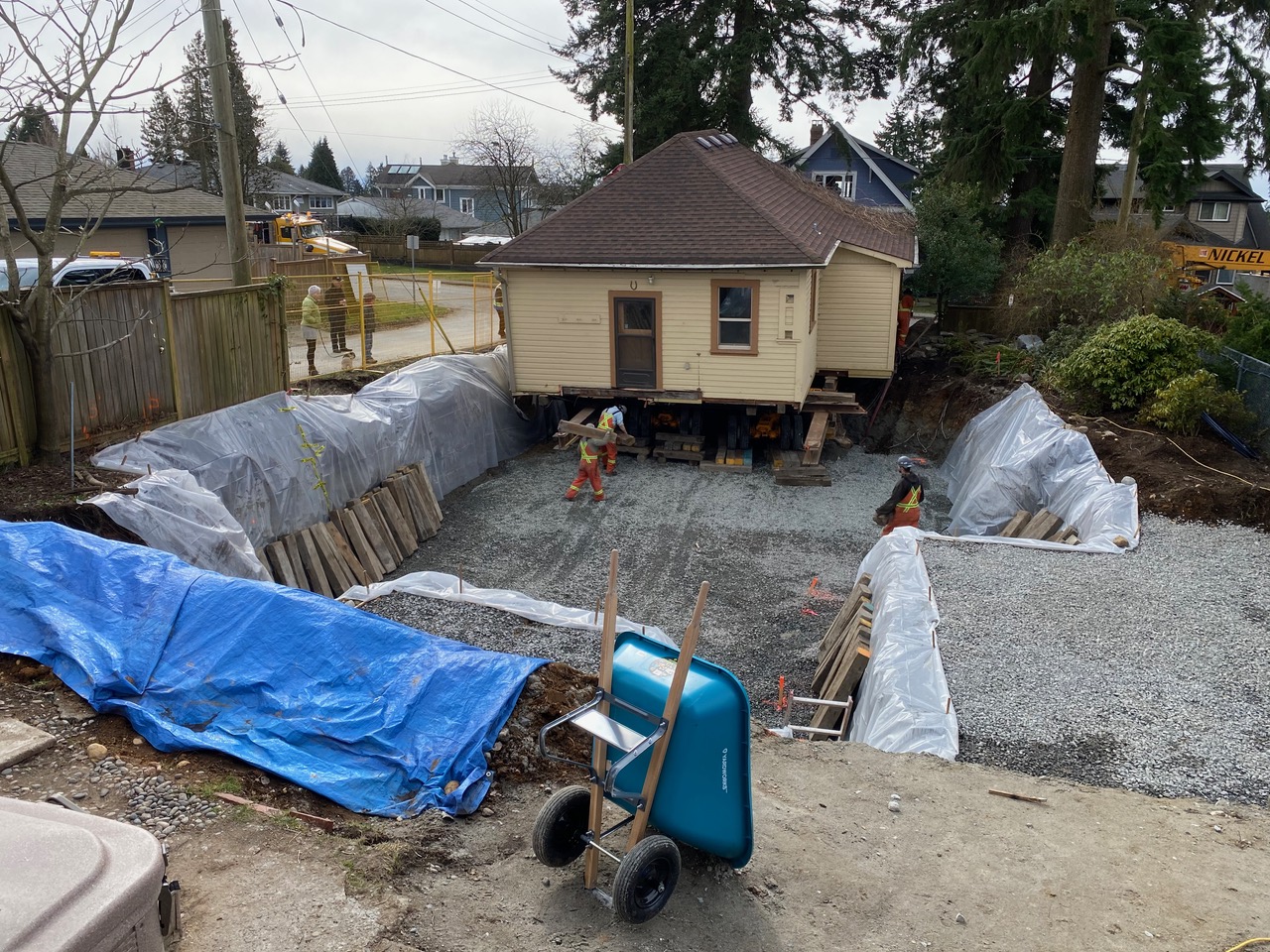 Copper Cottage on its new lot. Photo by Danny Nowak/Courtesy of Tony Dean.

As for Copper Cottage, they are enlarging the kitchen by knocking the north wall out and pushing it out three feet. That will affect the north facet of the cottage roof, which they are planning to do sympathetically to the original look and design of the house. They will end up with about 1,000 square feet on the main floor and about 1,100 square feet in the basement.

They are also planning to repaint the exterior. “We’re going to still keep it in appropriate heritage colours,” Dean says, “but Yvonne’s not too fussy about the copper gold colour.”

The neighbours approve. “We’ve had 100 per cent public support and neighbourhood support for what we’re doing,” Dean says. “People walk by every day, and they chat about it when I’m working away on the house with the workmen.”

Adds Perrault, “It’s a nice interaction in this time of COVID.”

Read more stories on heritage homes in our Design section.