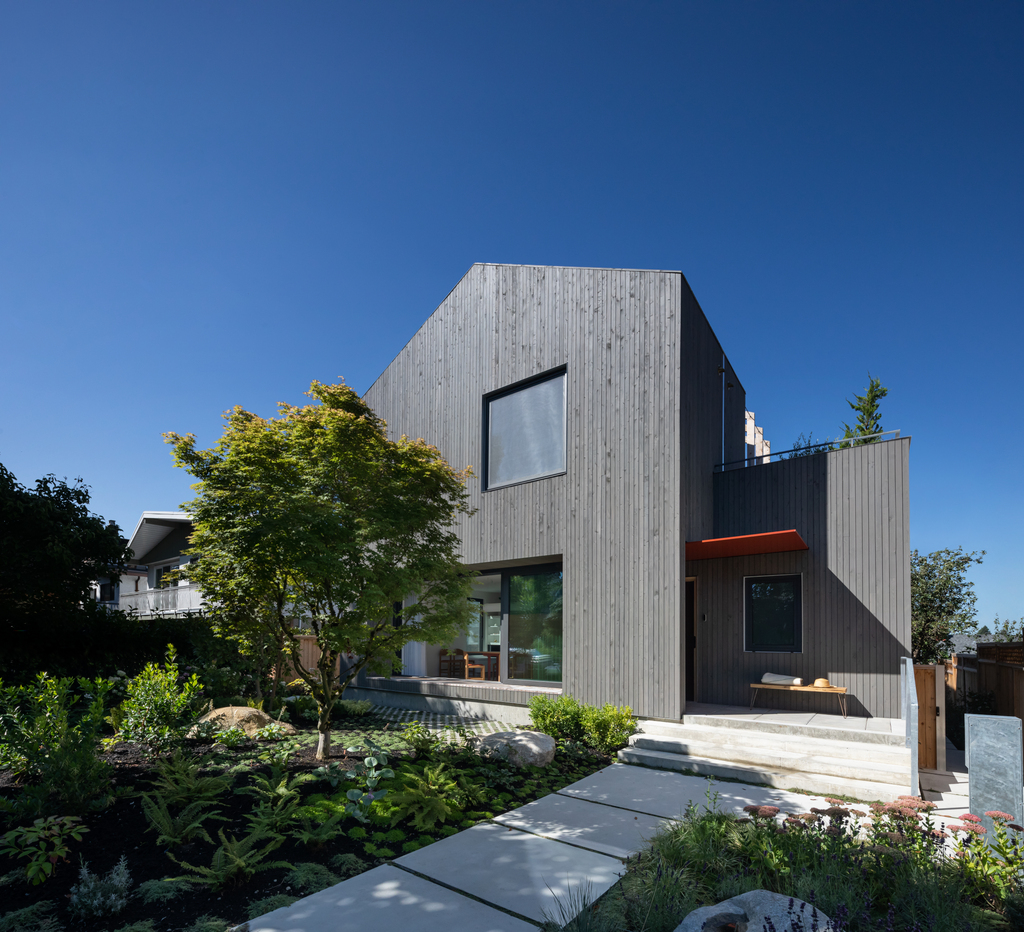 Anyone in Greater Vancouver building a new home or renovating an old one at the tail end of the last century or the beginning of this one could scarcely avoid being influenced by the permanently exaggerated, perpetually yoyoing real estate market and the fear that even the smallest introduction of architectural adventure or personal preference could mean taking a bath when it came time to sell.

Such was the climate through the mid-noughties that, even if you had no intention of building new and then flipping, or renovating for resale, you inevitably thought about the next queen of your castle before making design decisions. Would this imaginary successor like sandstone kitchen countertops as much as you do? Would they appreciate a drywall shadow gap? Should you forgo the distinction you desire for some random, distant sale and choose granite instead of sandstone, skirting board rather than shadow bead?

This bet-hedging has led to a complacency in local residential building, says Clinton Cuddington of Measured Architecture, whose design for this arresting modern house on Vancouver’s east side is a welcome respite from uninspired compromise. 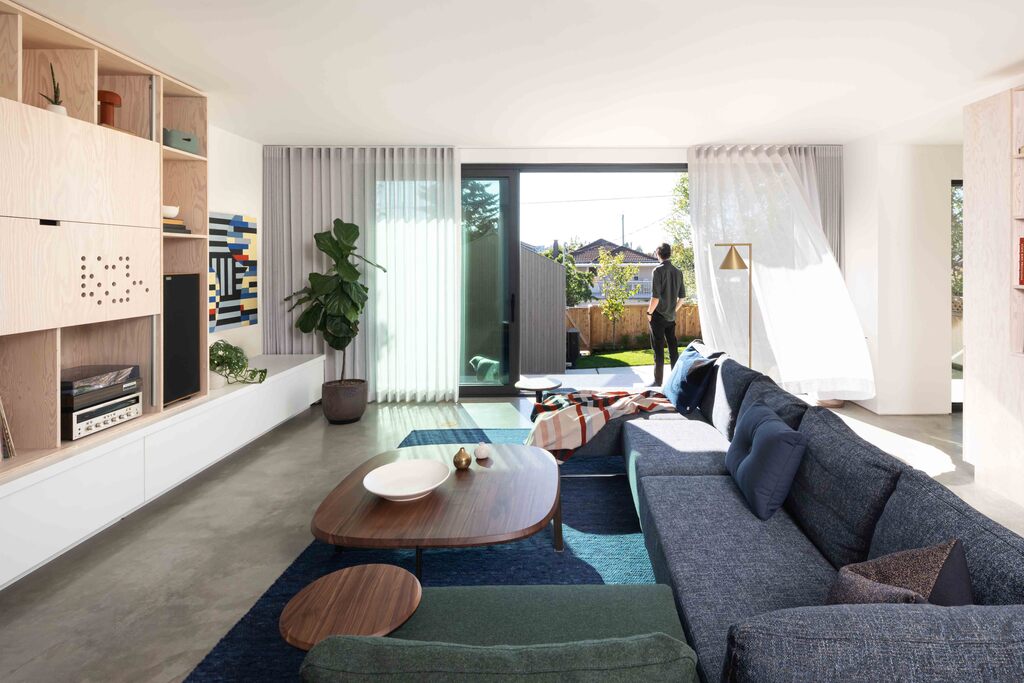 Cuddington says his collaborators, a low-key but adventuresome couple with two energetic young children, are part of a growing movement away from design with one eye on resale. These homeowners have no intention of pulling up stakes; they want a home that works for how they live now, he says, plus all the ways they might need it to work in the future, “and they want to invest long-term in their community.”

For this couple, that meant engaging Cuddington’s award-winning studio, which he heads with fellow architect Piers Cunnington, to help find the perfect property to build on, and then to devise fresh and original digs that are mindful of the setting—which in this case meant 1950-60s workaday homes and an unpretentious vibe. 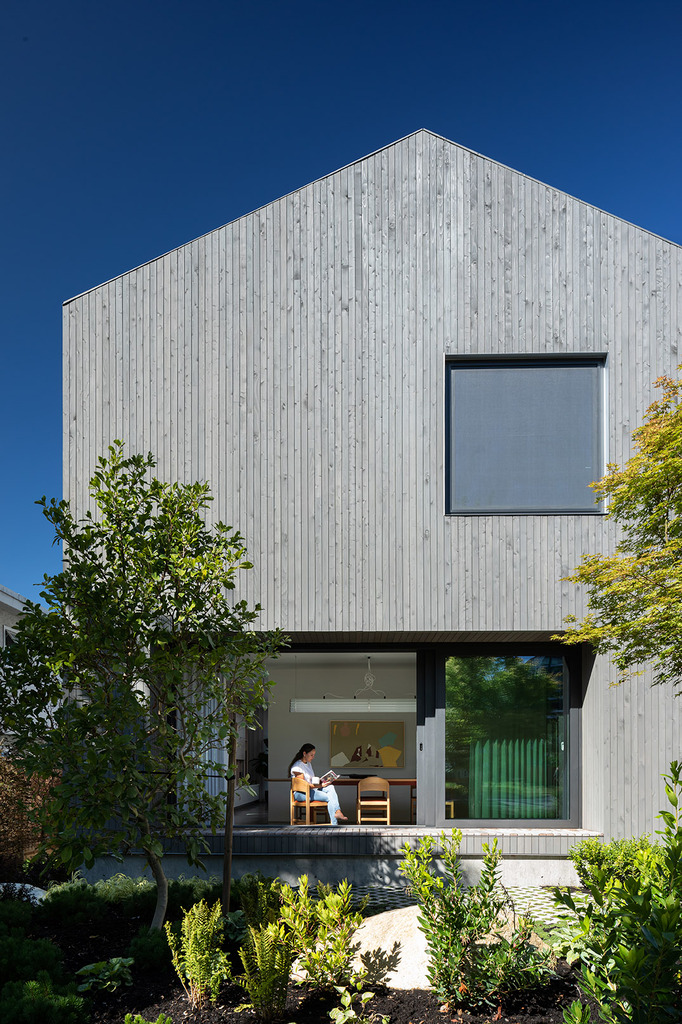 There is nothing pretentious about the stunning structure Cuddington designed for the family, and though it might not be instantly obvious, it does have things in common with its neighbours, including its scale, front garden setback, and a 5/12 roof pitch that mimics the Vancouver Special prevalent in this part of the city.

Community aside, this simple, beautiful composition would be an automatic knockout no matter where in the Lower Mainland it was built. Viewed from the street, its two, pleasing geometric forms—each a different height, one set back from the other—feel both original and familiar. The front facade, dead flat and clad in quotidian tight-knot Western red cedar combed and coloured grey, is devoid of the clutter and gewgaws—overhangs, gutters, downspouts, and trims—that can junk up houses. Even the picture window and statement front door, stalwarts of postwar housing stock, have been reimagined, in this instance to add a client-requested veil of privacy. 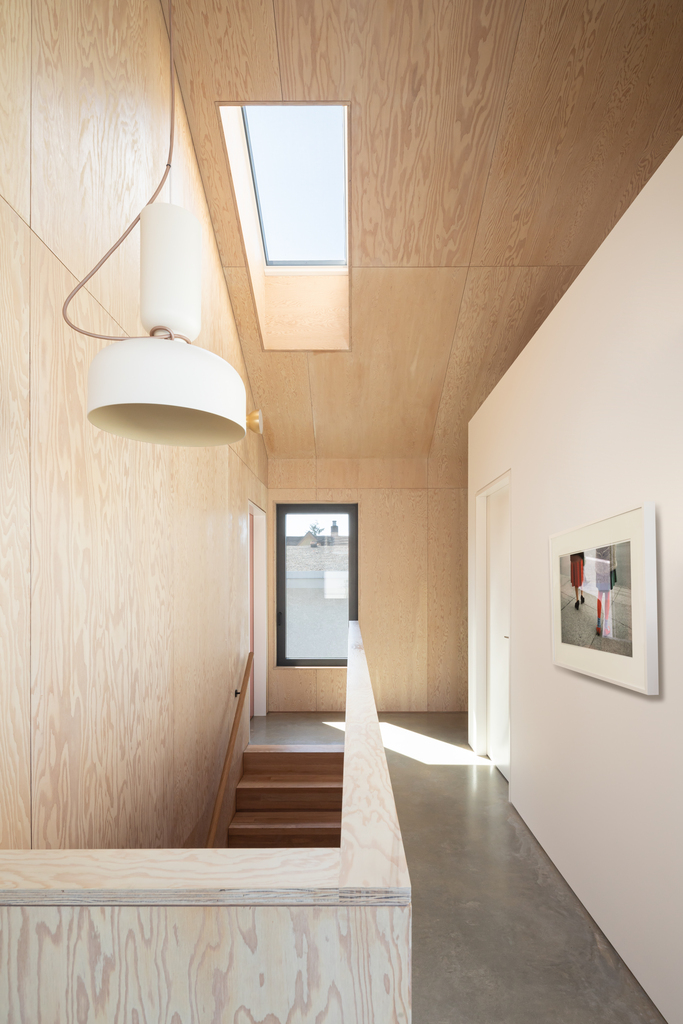 Cuddington says, when you walk down the street in neighbourhoods like this one, “you can see that people have been held ransom by picture windows, and they keep the blinds closed.” To avoid that, he recessed the window a soffit-width deep, then traded typical flat pane for sliding glass doors. Now the glazing is weather protected, and the long shadows cast by this wrap-around overhang naturally obscure the interior—gauzy ripple-fold drapes also help. As a bonus, the bottom part of the frame supplies a covered place to sit outside.

While the front stoop is wide and inviting, the front door is deliberately concealed from the street, protected by an oxide-red sliver-thin steel canopy.

A big surprise awaits guests on the rear exterior where the same basic shapes and forms found on the front elevation have been configured differently. At the back, the second-storey roofline is now asymmetrical, exposing the full width of what Cuddington calls the “side bag,” the single-storey part of the house that sports a terrace on top. This rebalance of the bulk of the building makes the back elevation dynamic and exciting to look at, though no less harmonious than the front. 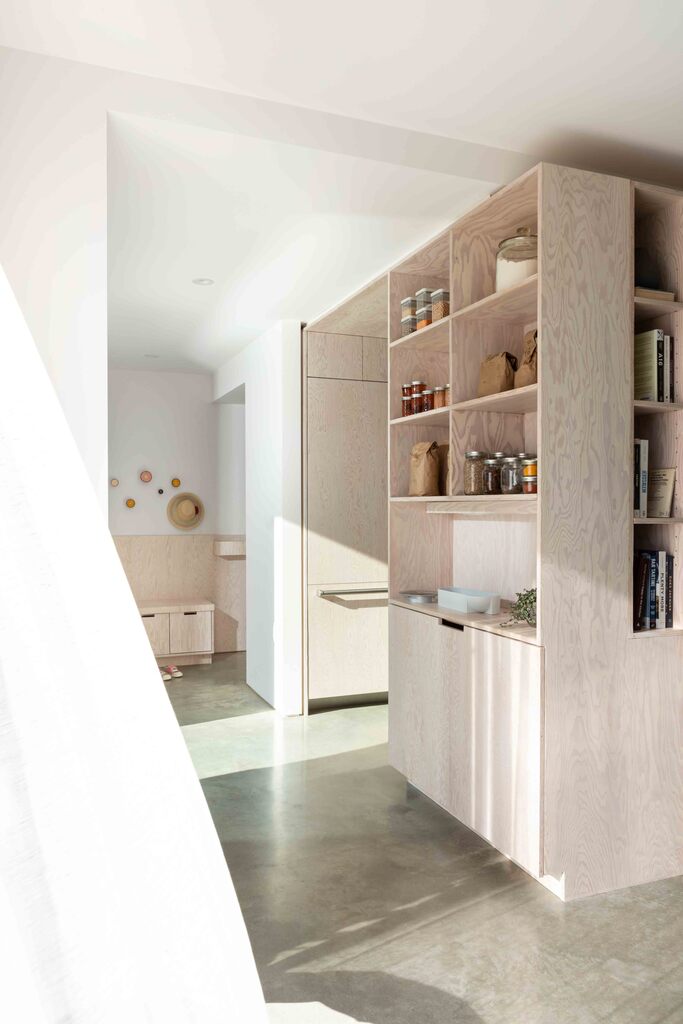 There is much to admire inside, beginning with the commanding kitchen. Located in the middle of the main level, it is visually open to both the front door and the back, as well as the living and dining areas. The space is physically defined by a shadow-casting panel of whitewashed plywood hung below the main ceiling. This material covers the cabinets, too, partnering surprisingly well with the sandstone and maple worktops.

Cuddington loves celebrating and elevating ordinary building materials and has used plywood extensively as a warm and textural counterpoint to flat white drywall. It is the predominant surface on the second floor and a secondary one in the basement.

Going up and down

Pedestrian plywood also makes an appearance on the two interior stairways, which call to mind great flights by Britain’s master of minimalism, architect John Pawson, who has this to say about their importance on his website: “Stairs do not simply connect spaces; they may also provide defining architectural experiences within buildings and the landscape.” Like Pawson’s narrow staircases, Cuddington’s are arresting events, each one with a natural light source and plywood played differently. 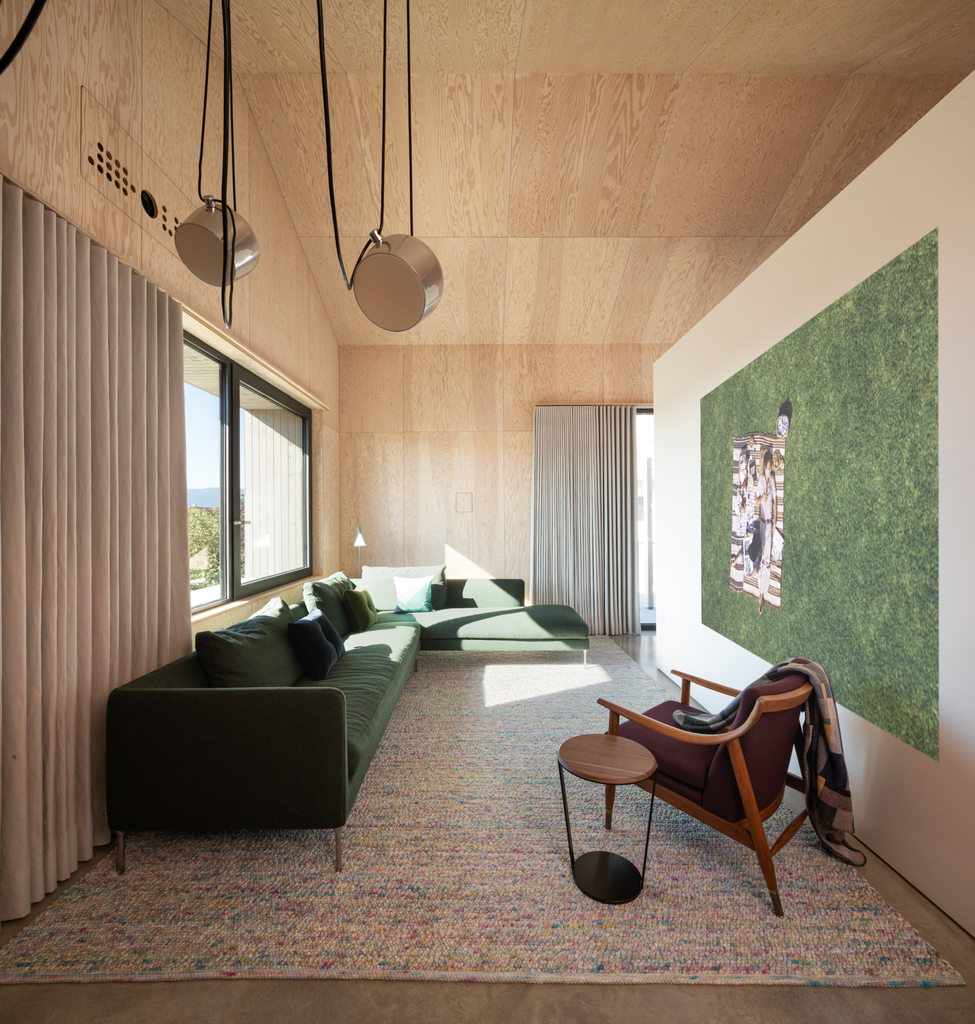 Of course, it made sense to flip the script when it came to space allotment. Why put the living room in the conventional street-side slot when the family can hang out in complete privacy at the back of the house, overlooking the patio and garden? Why put the master bedroom upstairs when everyone knows a basement is quieter and cooler?

This house was planned for the way the family lives now, everyone sleeping in the semi-subterranean, and for later, when both generations will want more physical separation. Right now, the second floor includes office space and a generous media/playroom—later, the kids will claim this realm, and the office will tuck easily into the basement.