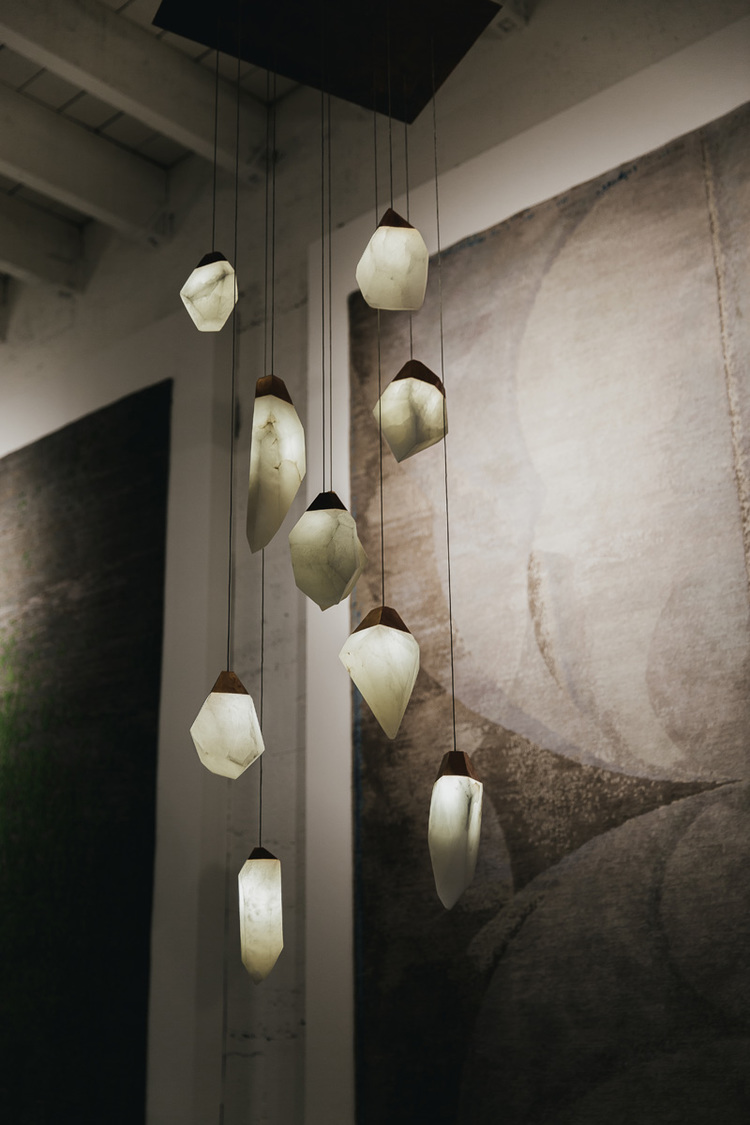 In his quaint home in Vancouver’s Cambie Village, sculptor Randall (though most people call him Randy) Zieber is seated near a bright window, the day’s light shining through onto a pile of Architectural Digest magazines. The self-taught artisan has perfected the use of alabaster—a soft mineral that lends itself nicely to light fixtures—lugging it from local quarries and shipping it in from Europe, then propping it up in his East Vancouver studio and using it to create a vibrant, geometric collection of sculptures.

His most famous piece is a pendant chandelier simply called Alabaster, a model that won him second place in the emerging category at the LAMP lighting design competition in Vancouver in 2015. Alabaster can be seen dangling in lobbies, restaurant spaces, and homes across the world—from as nearby as Whistler to as far away as the United States, Australia, and Israel.

“A lot of kids like to draw and scribble,” says Zieber of his childhood, noting that most of his inspiration as an artist and sculptor comes from the shapes, figures, lines, and curvatures found in nature; his online presence on Pinterest shows he is also deeply inspired by concrete design and industrialism. Zieber has a degree in engineering and electronics (a career he pursued immediately after graduating, but left behind once he deemed the desk job too stagnant); it was during his second degree in business that he began exploring language, art, stone sculpture, and, spontaneously, stone masonry.

“He says to me, ‘Let’s get in the vehicle and let’s drive around and let’s look for stone to carve,’” Zieber says, recalling the story of how he and his good friend (a geologist and avid art collector) in the early 1990s set out to explore British Columbia’s vast quarries of limestone, marble, granite, soapstone, and alabaster one summer between school semesters. “We went to the geological office and got all these maps, and we started driving around some of the logging roads and picking up stones,” he remembers. After sourcing all summer, the pair returned to finish their respective degrees in the fall, selling the wholesale goods to interested buyers and customers throughout the winter. Years later, Zieber founded the sculpture stone and carving tools company Neo:Lithic Stone, which now provides materials for roughly 70 artists in the Lower Mainland and across the border.

With his eye for sourcing, it was only natural that stone art would become an even bigger part of his life. It all began roughly 25 years ago when a friend introduced him to a sculptor based out of a local gallery. “Those two little black pieces up there on the mantle,” he says, pointing over to two small, hand-sculpted figurines that sit above the fireplace, “those are my first little pieces that I did when I was working with him.” Now, alongside his full-time duties at Neo:Lithic, Zieber works on two or three pieces for a prototype every day, either by himself or with help from friends. He created his first lighting model in 2015.

“Everything you see around you, if it’s a chair or table,” he says, “to me, it’s all a sculpture.” This is apparent in his home, where spaces are filled with pieces of functional art that he and his wife have collected over the years—an oversized white lamp that could be out of Alice in Wonderland; a beautiful ornate gold mirror above the fireplace next to his first sculpted figurines; and a collection of plastic mid-century chairs.

When it comes to Zieber’s own work, his mineral of choice is alabaster. “It’s something that if I have an idea, you can shape it quite easily and quickly. It’s like making something out of wood,” he shares. “I can get out my saws, I can cut it, and shape it, and turn it into whatever. And there it is.” He walks over to the prototypes found in his dining room: there are the Lollipop hollow donut-like fixtures, which separately look like long candy sticks, but when placed together on the ceiling, look like a constellation of stars and moons; their alabaster resembles something like marble.

“It’s kind of funny, but I’ve had this on my desk and I was like, ‘What could I do with this piece of metal?’ And out of that, this light developed,” Zieber says of the Full Moon, for which the stiff, metal base arches like a narrow rainbow and connects to a rounded piece of alabaster, soft to the touch.

Then there is the aforementioned Alabaster, a collection (ranging from one to 40 strands) of hanging crystal-like shapes from a canopy web bolted to the ceiling. Each fixture is cast and plated into a metal casing, and hand-carved and sculpted into a rough-looking crystal. After being shown at the International Contemporary Furniture Fair in 2018, the Alabaster was commissioned by one of New York’s largest real estate firms, Silverstein Properties—owners of World Trade Centre.

And although he has found success in his use of one material, Zieber hopes to delve into a variety of others, such as clay, metal, wood, and glass. “I could only find one company in all of North America that still does [glass-blowing] in its traditional way,” he says. It is evident that Zieber has a certain standard for each and every project he makes by hand, clinging to a strong belief that the resurgence of local craftsmanship is the future of contemporary sculpture and design.

“I think at this time, in all of the design world, there’s been a lot of resurgence of the local maker,” he says. A major player in this movement is the cherished 1000 Parker Street Studios in East Vancouver: an art collective home to roughly 227 craftspeople with studio and warehouse spaces, and which Zieber proudly notes he is a part of. “The whole building is full of small shops who are making small production, or limited production,” he says. “Handmade, that kind of thing.” Adding his own touch into the mix, Zieber represents the local artisan with flair and character.

Explore more from our Design section.